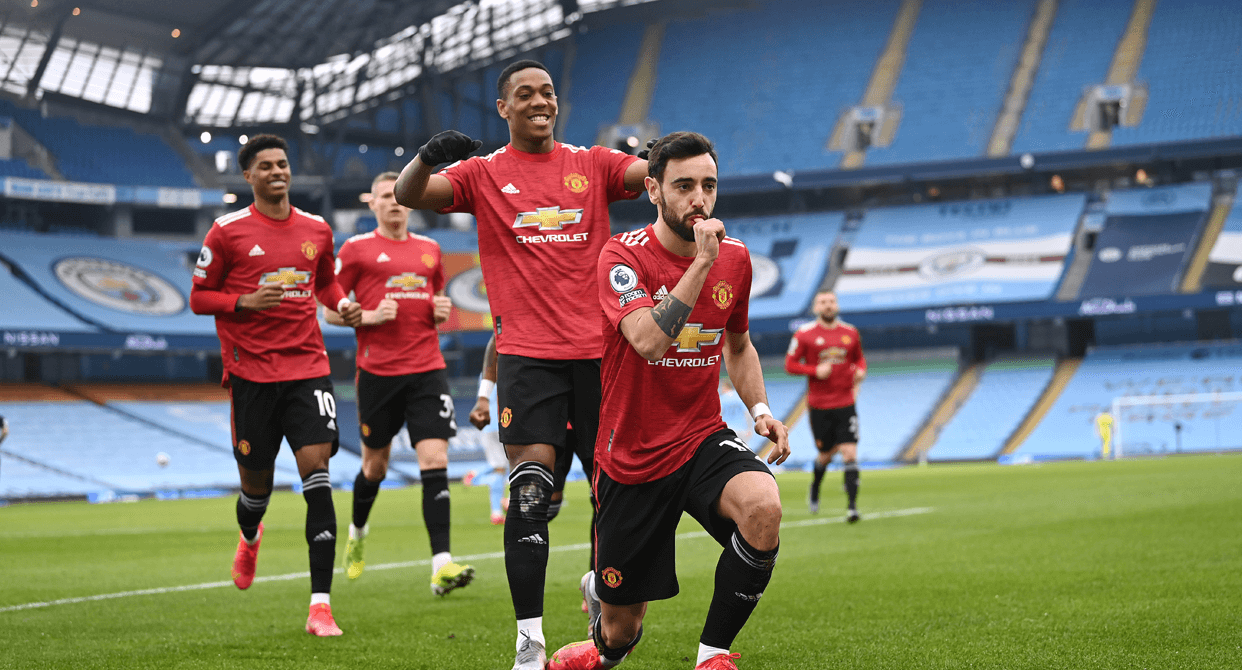 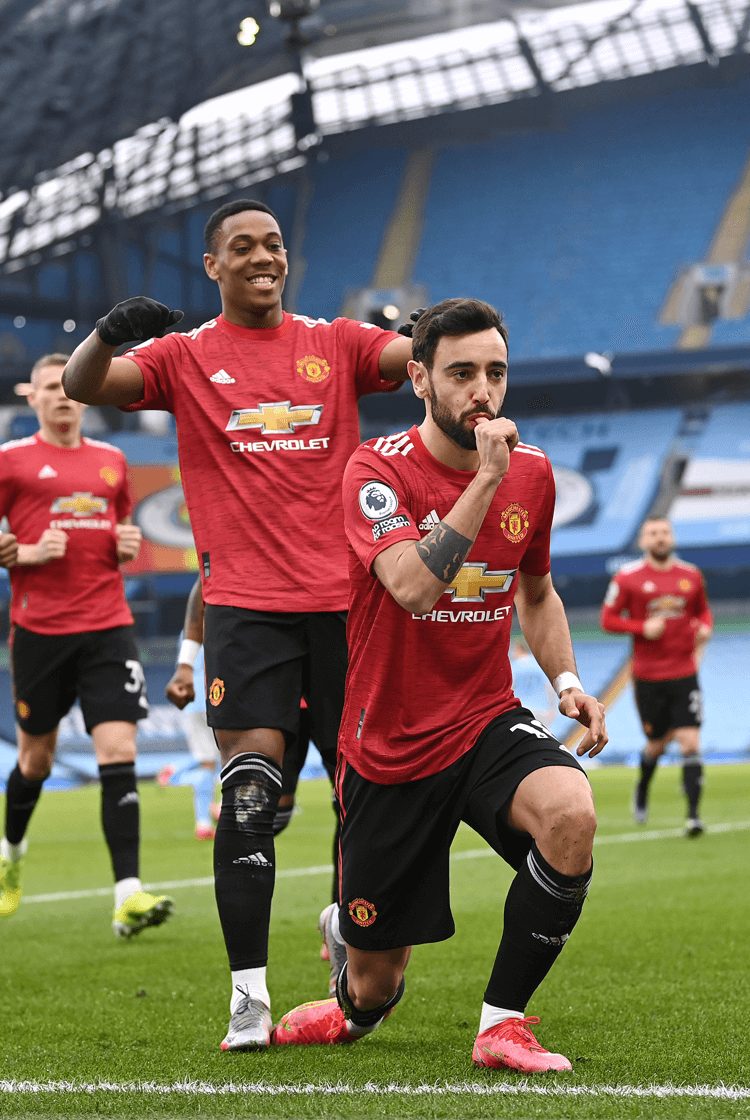 Manchester United recorded one of their finest victories under Ole Gunnar Solskjaer by ending Manchester City's remarkable run of 21 successive wins to return to second in the Premier League. Gabriel Jesus' foul on Anthony Martial presented Bruno Fernandes with an early chance to score from the penalty spot, and the in-form Luke Shaw added a second in the second half, in turn extending United's record to a 22nd league match away from Old Trafford without defeat. "We were on the front foot for 10 to 15 minutes but then the last half hour of the first half we played too much on the result," Solskjaer said. "We had to get to half-time to get hold of everyone again. The second goal was magnificent." The defeated Pep Guardiola said: "Maybe we didn't deserve to lose. We were not good in front of goal – our strikers were not brilliant – but it happens." 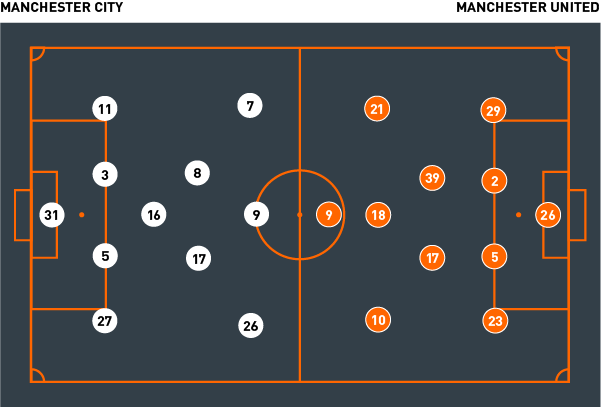 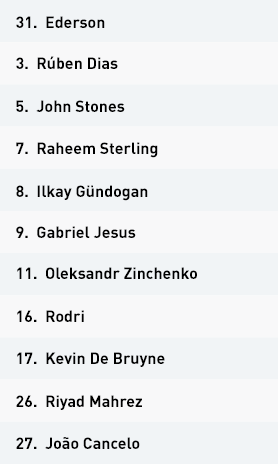 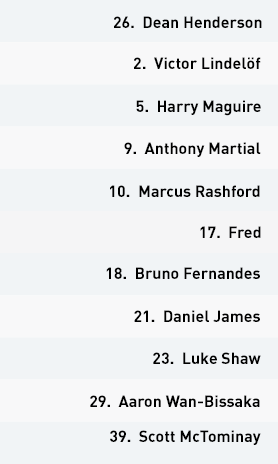 Manchester City were organised by their manager Pep Guardiola into a 4-3-3 formation led by the front three of Riyad Mahrez, Raheem Sterling and Gabriel Jesus. Their opponents, Manchester United, defended with a 4-2-3-1.

City suffered the early frustration of conceding a penalty, but responded to quickly establish control of possession, which they used to attempt to play through United's structure. Bruno Fernandes was instructed to prioritise Rodri, and Marcus Rashford and Fred to pressure City's influential right-back João Cancelo as he moved infield. With Anthony Martial closing down the in-possession central defender and Daniel James seeking to block passing lanes before moving to press in the wide areas, Cancelo was instead asked to move into central midfield to combine with Rodri to overload Fernandes and to provide Ederson with an additional passing option in a central position.

Cancelo's movements increased Mahrez's space towards the right, where he withdrew into a deeper position to receive to feet, in turn drawing United's structure to one side of the pitch. When he then switched play, City succeeded in accessing spaces through which to penetrate, forcing United to shuffle across. For all of that dominance in possession, too few runs were made in behind United's defence, which rarely became stretched – they instead too often moved to towards the ball. On the occasions runs were made in behind, they offered greater attacking potential.


City gradually appeared more threatening, but were too often undermined by their final ball. United were also impressive at tracking the runs into the half-spaces and accompanying passes that City's opponents so often struggle with. Victor Lindelöf and Harry Maguire superbly defended the penalty area, both aerially, and on the ground, by blocking crosses targeting it. Scott McTominay and Fred also protected the defenders behind them by screening cut-backs and picking up late runs and second balls.

City looked most threatening when they advanced through the centre of the pitch or moved the ball centrally and then made a diagonal pass to one of their wide players. Mahrez and Sterling had been selected in positions that encouraged them to move infield on to their dominant foot, but they became predictable as a consequence, even if some of City's most dangerous attacks came from them advancing with width and playing balls across the penalty area and towards the back post. Perhaps only the timing and weight of delivery prevented City from scoring.

Ole Gunnar Solskjaer prepared Manchester United to play with their long-favoured 4-2-3-1 formation in which Bruno Fernandes supported the fast front three of Daniel James, Marcus Rashford and Anthony Martial. Their hosts, Manchester City, defended with a 4-4-2, via Riyad Mahrez and Raheem Sterling withdrawing into midfield and Kevin De Bruyne advancing to alongside Gabriel Jesus.

Rashford and James adopted high and wide positions to discourage City's back four from advancing and therefore to both create spaces between the lines and to threaten in behind. Martial and Fernandes regularly moved to towards the ball to create, with Fred and Scott McTominay, a four-on-two in central midfield, and made their movements at different times to disrupt Rodri's positioning and decision-making. Martial, for example, would drop on Rodri's right shoulder to draw him towards him and Fernandes would, within seconds, make a run into the space Rodri was vacating, from where he would receive, turn, and advance, and with James and Rashford ahead of him.


Even then, however, United recorded a total of only 34 per cent of possession, leaving them reliant on other means to secure victory. They prioritised moments of transition, which became increasingly common, and when James, Martial, Fernandes and Rashford, and sometimes their full-backs Luke Shaw and Aaron Wan-Bissaka, were influential.

Their counters often started in the midfield third – there were actually several four-on-threes United didn't take advantage of – but it was one from the defensive third, following Dean Henderson releasing Shaw, that led to their second goal, one scored by the full-back. City's management of defensive transitions was also less efficient, and partly because of the numbers they committed forwards in an attempt to score.