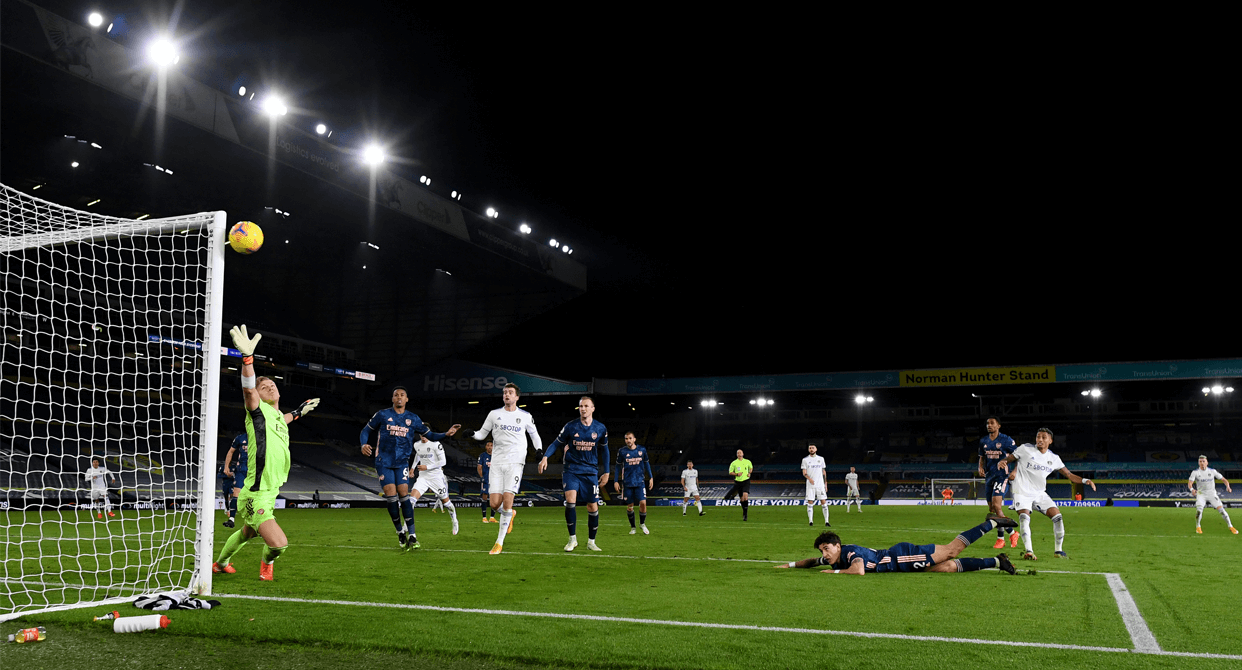 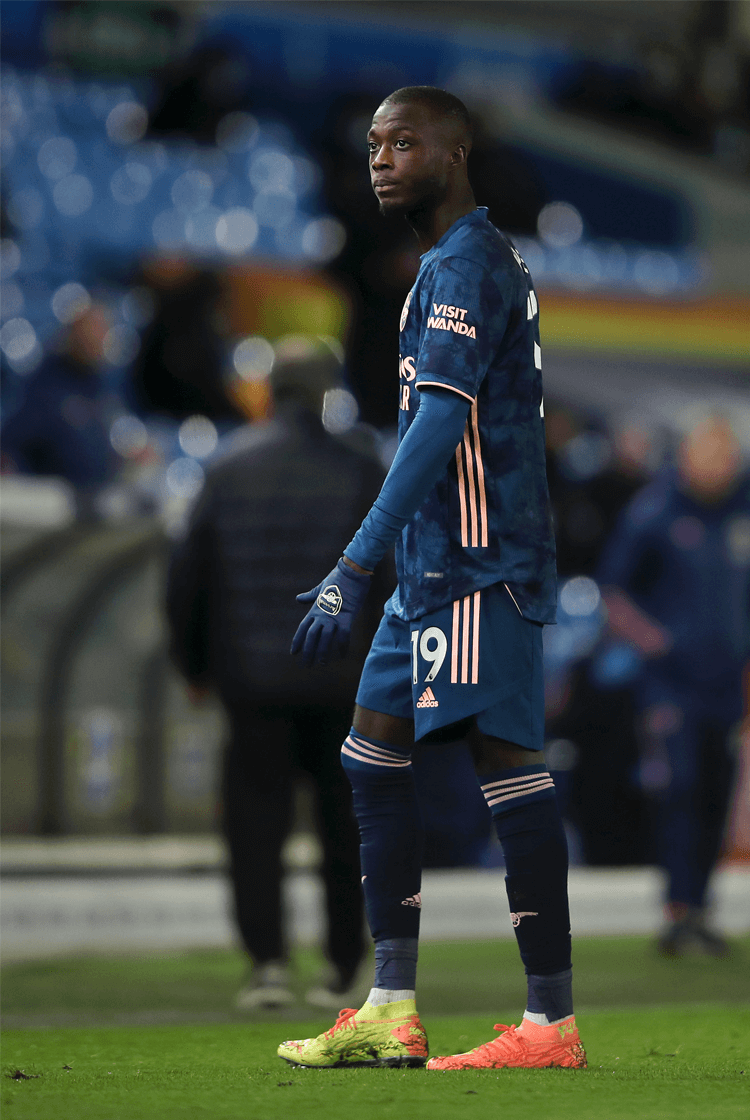 Leeds struggled to take advantage of Nicolas Pépé being dismissed for headbutting Ezgjan Alioski after being held to a goalless draw by Arsenal. They wasted goalscoring chances both before and after his red card, which was delivered following the intervention of the Video Assistant Referee (VAR) – Rodrigo, Patrick Bamford and Raphinha all each struck the frame of the goal. Mikel Arteta's team again did not convince, leaving them with only one goal – Pierre-Emerick Aubameyang's penalty against Manchester United – since October 4. "I really liked the personality of the team when Pépé let the team down, how we stuck to what we had to do and had a moment or two to win the game, but obviously it makes it really difficult," Arteta said. His opposite number, Marcelo Bielsa, said: "I'm cross because we didn’t win. It was a difficult week for different reasons. Missing players; players out of condition; injuries and suspensions. There's an incredible amount of games coming up. We need to score more goals. But I'm happy with how much team has evolved." 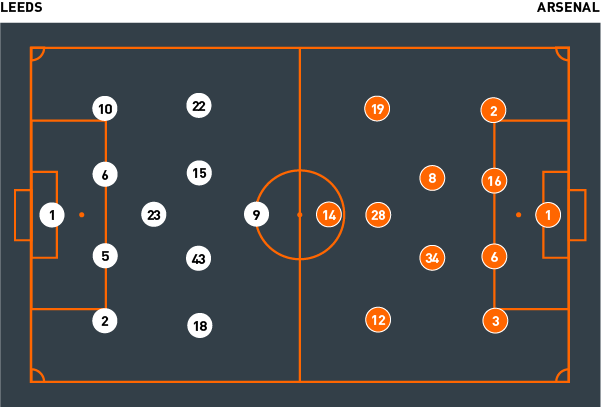 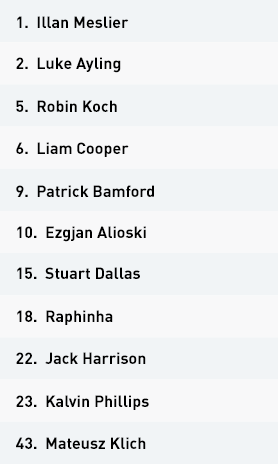 Leeds were organised by their manager Marcelo Bielsa into a 4-1-4-1 formation led by Patrick Bamford, who featured as their lone striker. Their visitors, Arsenal, favoured a 4-2-3-1.

Arsenal sought to press Leeds when they were building from the back. Pierre-Emerick Aubameyang led that press, towards the inside shoulder of the in-possession central defender – to discourage switches between Liam Cooper and Robin Koch – and behind him, Willian and Nicolas Pépé prioritised Ezgjan Alioski and Luke Ayling. The three-on-three that existed in central midfield presented Leeds with the challenge of having to break their opponents down, instead of relying on an overload; the overload they had instead existed in the defensive third, and Aubemeyang's efforts there limited its potential.

Koch and Cooper therefore carried possession out of defence, in an attempt to engage Arsenal's midfielders; passes into Leeds' full-backs also succeeded, and encouraged them to attempt to advance in both the wide areas and half-spaces. Towards the right, Raphinha offered underlapping runs to receive a pass from a deeper position, whether doing so directly or as the third man, and his movements tested Kieran Tierney and his desire to follow him or remain in his position at full-back. Ayling, and to a lesser degree Mateusz Klich, was also ready to advance outside of him.

Their off-the-ball movements were made to disorganise Arsenal's defence and create spaces through which they could penetrate. Those made in wide areas regularly led to opportunities to cross, but Arsenal were comfortable when defending against them, and Héctor Bellerín and Tierney were determined to ensure that their defence remained compact and could do so because of Willian and Pépé's willingness to track back and engage.


For all of their success at defending the first phase of crosses, Arsenal conceded attempts at goal through their struggles to secure the second ball, and perhaps were fortunate not to be punished. Leeds also adapted by instead cutting the ball back to the edge of the penalty area; Bamford made runs across the relevant central defender, and the far-side winger and occasionally a central midfielder would also attack the area while the other winger arrived late or curved his run backwards to meet those cut-backs. They again posed an attacking threat, but struggled to find the finishing touch.

Following Pépé's red card, Arsenal began to defend with either a 4-4-1 or 4-2-3. Bielsa also brought on Rodrigo, to replace Ayling, and moved Stuart Dallas to right-back because of Rodrigo's potential to create against the visitors' defensive block. They regardless had to remain patient, and to circulate the ball across their defence, where Arsenal were content for Koch to receive and advance. He often tried to clip passes in behind Arsenal's defence, but his efforts were ineffective, and invited Mikel Arteta's team to slow play down.

Later still, Leeds instead sought to execute intricate passes and movements, to find the spaces outside of Arsenal's central defenders that may have represented positions from which to play low crosses or shoot, or to shoot from distance, given the deep territory their visitors' defensive line was occupying. Their combinations offered greater attacking potential and, particularly given their speed, again tested the decision making of Arsenal's defenders. Leeds hit the frame of the goal three times, and recorded a xG total of 2.19.

Arsenal were set up by Mikel Arteta into a 4-2-3-1 formation in which Dani Ceballos and Granit Xhaka formed the double pivot at the base of their midfield. Leeds again used their man-oriented, out-of-possession approach that meant them having a one-man underload in the final third, but a one-man advantage in defence, and which meant that their shape was most commonly a 4-3-3.

Arteta's team struggled to progress through Leeds' aggressive approach, and therefore to build momentum while attempting to build possession. Their passes into midfield were regularly followed by passes back into defence, because of the pressure that existed there; Leeds' intensity and their players' commitment to staying with their opponent gave Arsenal minimal time on the ball to execute their next move.

Pierre-Emerick Aubameyang occasionally withdrew into midfield to stretch Leeds' defence and create space for Willian, Joe Willock and Nicolas Pépé, but that defence remained organised; one defender moved with the striker, and their free player moved to protect the space that had been vacated. Kalvin Phillips also regularly withdrew towards defence to contribute, but without entirely freeing up Willock.


When Arsenal were able to progress possession – most commonly during moments of transition – Kieran Tierney and Héctor Bellerín advanced from full-back to provide their width, and a further attacking option. It was when attacking one-on-one that Arsenal perhaps offered their greatest potential; Tierney, Bellerín, Willian and Pépé were capable of beating their direct opponents, and therefore to force a further defender to commit to towards the ball.

Arteta's team regardless did not regularly capitalise on that, and instead continued to seek to progress possession by circulating it. That they also offered potential on the counter meant that countering became their favoured form of attack after Pépé's red card. Aubameyang and Bukayo Saka, who replaced Willock, were otherwise direct in possession and in trying to access the spaces behind Leeds' defence; Saka twice threatened to score.