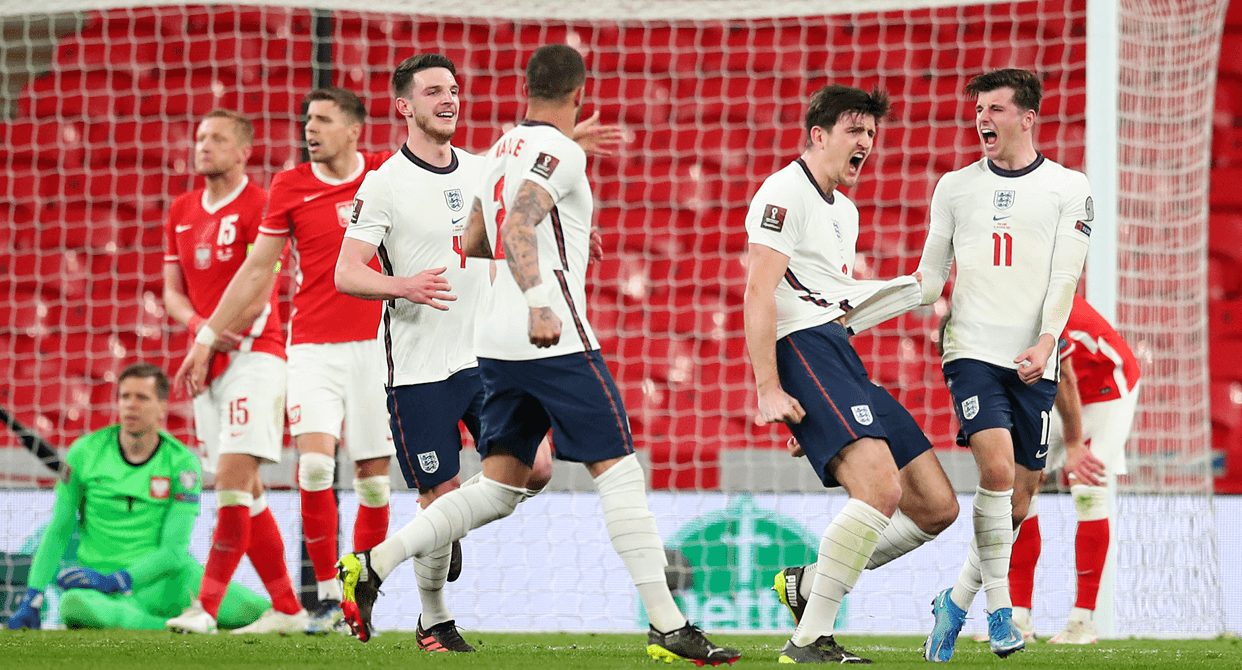 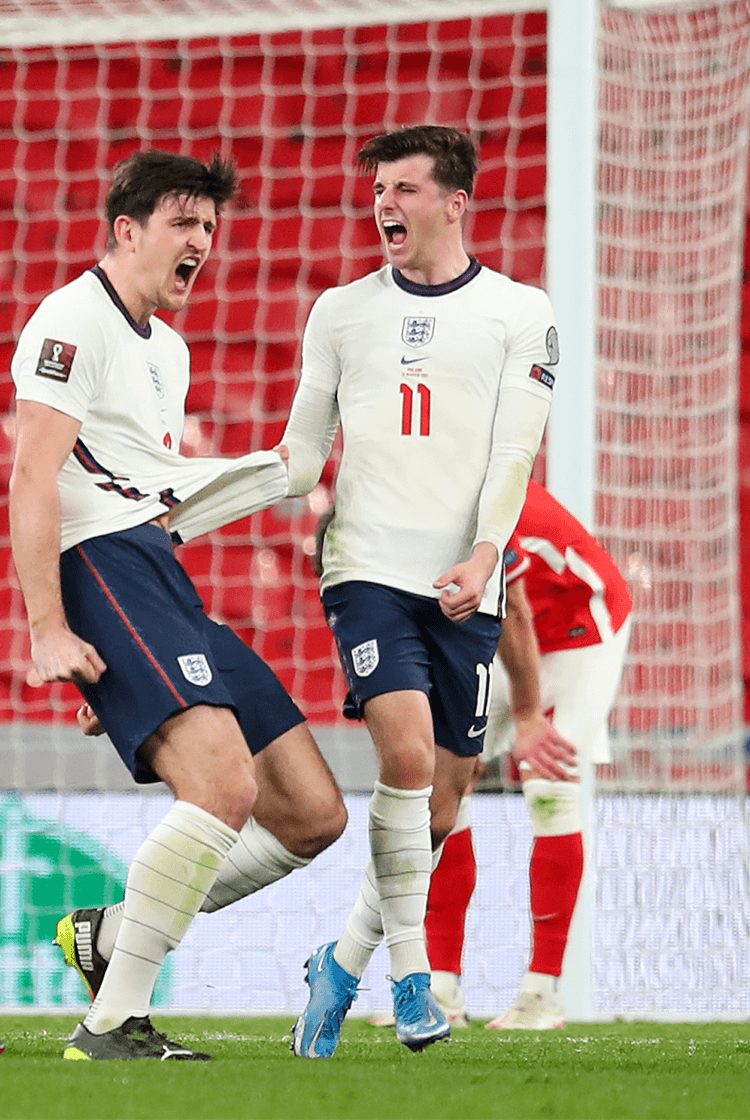 Harry Maguire's late winning goal secured a third victory from three for England in their attempts to qualify for the 2022 World Cup. Following wins over San Marino and Albania, Poland – perhaps their biggest threat in Group I – represented their greatest test, and after the error by John Stones that led to Jakub Moder scoring the visitors' equalising goal in the second half, England were at risk of dropping points. During the first, Harry Kane had scored his 34th international goal from the penalty spot after Michal Helik's challenge on Raheem Sterling; Maguire then finally delivered all three points after Stones headed Phil Foden's corner into his path. "We were very good in the first half, we were in control of the game and to concede a goal like we did can hit the team," said England's manager Gareth Southgate. "They stuck at it, they recovered their composure and got an important set-play winner. John Stones managed to compose himself for the rest of the game and had a part in the winning goal which was important – you can fold in those moments and he didn't." 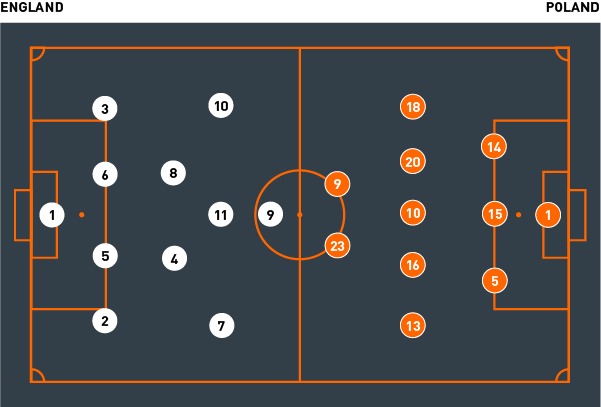 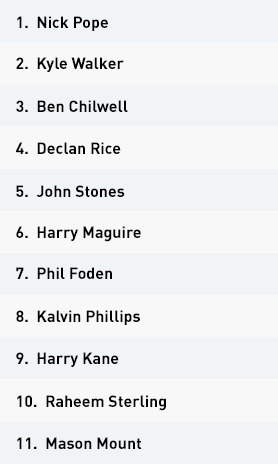 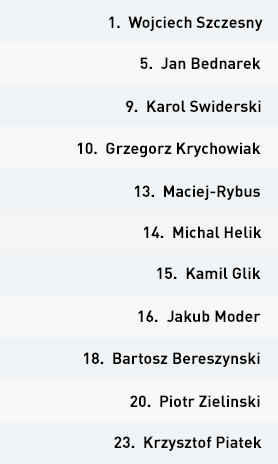 England were organised by their manager Gareth Southgate into a 4-2-3-1 formation built on the double pivot provided by Kalvin Phillips and Declan Rice. Their visitors, Poland, defended with a 5-3-2.

Poland sought to pressure England via the front two of Krzysztof Piatek and Karol Swiderski closing down John Stones and Harry Maguire. They were content when England built possession in their defensive third, and sought to apply their desired press when the ball moved into midfield. Their widest central midfielder moved to take the relevant English full-back, to preserve Poland's back five – unless possession was switched and their midfield three struggled to shuffle across with the speed required.

England attempted to capitalise on that by drawing a midfielder into pressing towards a full-back before quickly moving possession across defence and then playing towards Mason Mount, often positioned in the relevant half-space, elimating Poland's midfield and encouraging combinations between Mount, Raheem Sterling, and Ben Chilwell. It was one such move that led to them earning the corner from which Maguire scored their winning goal.

Southgate's team offered increased potential towards the left. Their use of inverted wide forwards also encouraged rotations; Sterling moved infield, Mount withdrew into deeper territory, and Chilwell advanced; between them their movements challenged the decision making of Poland's defenders, who were presented with the dilemma of tracking runners or holding their positions.


England offered even greater attacking potential when their creative players drove at Poland's defenders, who were drawn to towards the ball but struggled to regain possession, and as a consequence were exposed or committed fouls that led to set-pieces. Perhaps only poor deliveries from those set-pieces meant that they weren't truly punished.

It wasn't uncommon for England to build possession with five outfielders and for the other five to be in attacking positions. Kyle Walker, Stones, Maguire, Rice and Chilwell were most commonly the five building, but there were also occasions when Phillips and Mount replaced Walker and Chilwell, who instead featured in the attacking five.

What started as their 4-2-3-1 often, during the second half, instead became a 4-1-4-1 in which Phillips advanced and Rice remained between defence and midfield. They still offered five points of attack, and support behind the ball, but too often lacked quality in the final third, where the final pass, cross or shot was poorly executed. Poland were rewarded for their willingess to apply pressure further forwards instead of remaining in a deep block when they capitalised on an error from Stones to score their equalising goal, but England eventually secured all three points via the goal from Stones' central defensive partner Maguire.

Paulo Sousa set Poland up in a 3-5-2 formation built on the back three provided by Michal Helik, Kamil Glik and Jan Bednarek. They were shorn of the influential Robert Lewandowski; England, meanwhile, defended with a 4-2-3-1 led by Harry Kane.

When applying their higher press, Kane, Sterling and Foden aggressively closed down Poland's back three, Mount took Krychowiak, either Foden or Sterling would take their closest central midfielder or Rice and Phillips would take both of the other two, and Walker and Chilwell would close down their wing-backs. Their high press proved effective, and led to some promising counters after regains were made.


Having attempted to play short, Poland started to aim longer passes into those making runs in behind, and to support around the ball in the pursuit of the second contact. Those longer passes were mostly diagonal balls towards a run the started infield.

Poland, regardless, struggled to retain possession because of the intensity of the press England applied at defensive transitions. The hosts reacted quickly to close down the in-possession player as soon as possession was turned over, depriving him time to play the ball with quality.

Arkadiusz Milik replaced Swiderski during the second half and his presence ensured Poland's front two offered different movements. Milik withdrew to between the lines, and Piatek made runs in behind; between them they worked to unsettle England's defence or create a free figure capable of receiving to feet or running in behind. Their most promising spell followed; like England, they attempted to maintain five points to their attack; their wing-backs provided width, and Milik's willingness to withdraw into deeper territory gave them the potential to link play by playing into his feet, forcing England to become compact, before he switched the ball to those wing-backs.