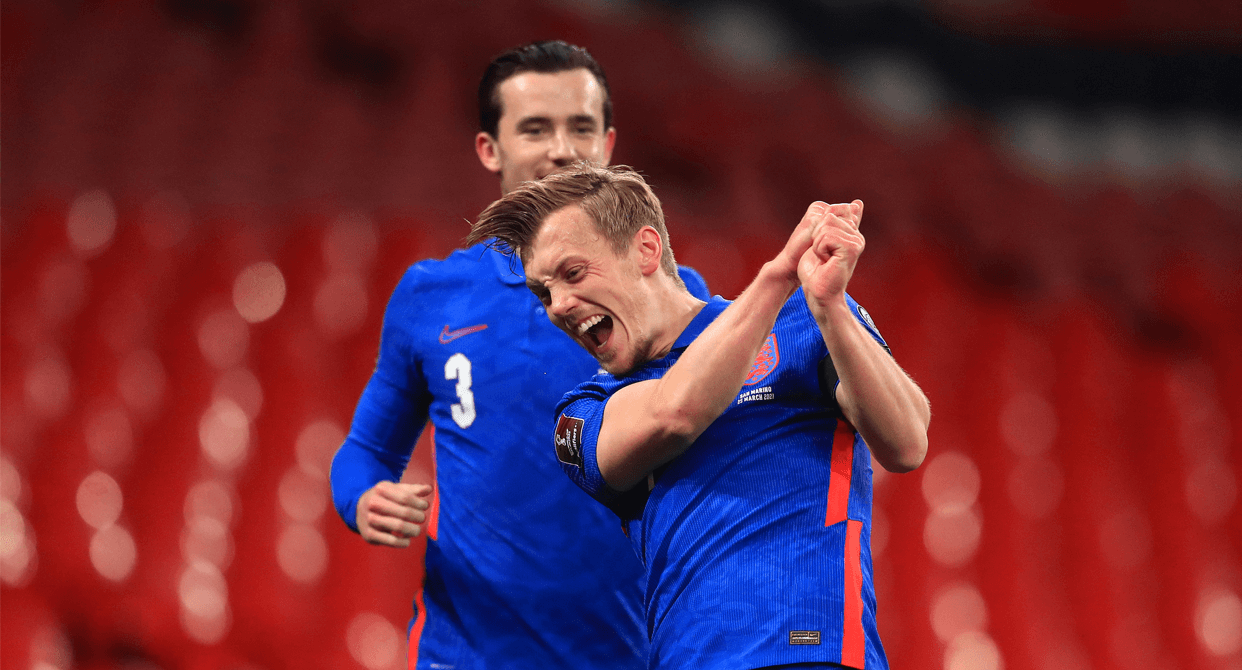 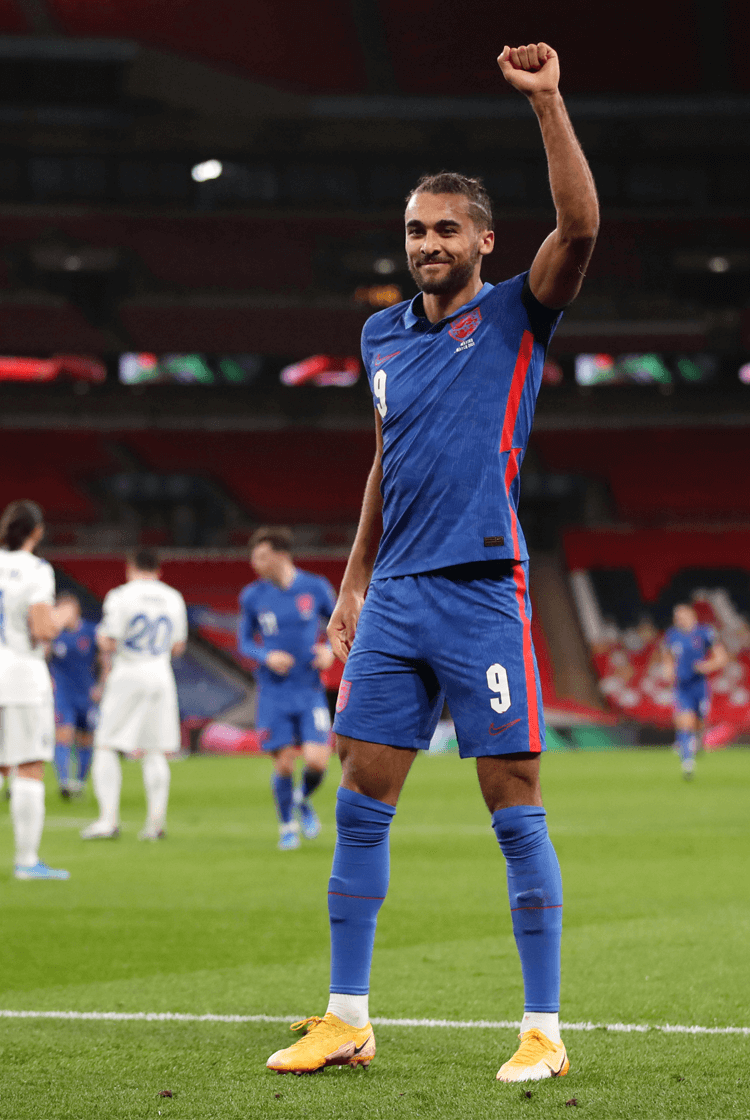 Another experimental England XI eased to victory over San Marino in their first World Cup 2022 qualifier. Jordan Henderson, Harry Maguire and Harry Kane were among those who didn't feature, but in their absence James Ward-Prowse and Dominic Calvert-Lewin demonstrated their ability to deputise, if not more. Ward-Prowse scored England's opening goal, and Calvert-Lewin struck twice, either side of Raheem Sterling's finish. Ollie Watkins also marked his first international appearance by scoring as a substitute. "We did it as well as we could," said England's manager Gareth Southgate. "I was really pleased with the way we pressed when we lost the ball – that highlighted the mentality of the team for the full 90 minutes. Of course, it's an opponent we should beat, but I thought they went about the job really well." 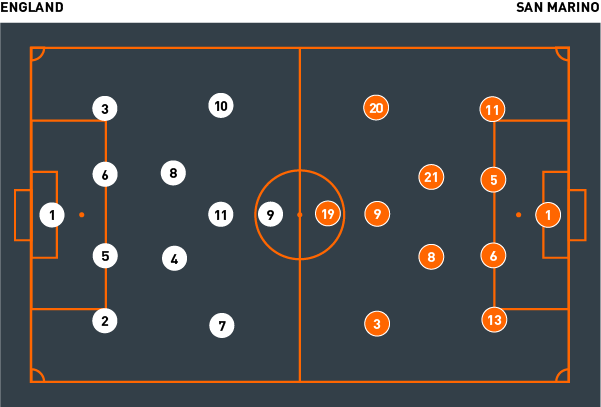 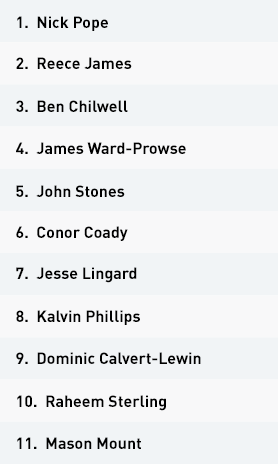 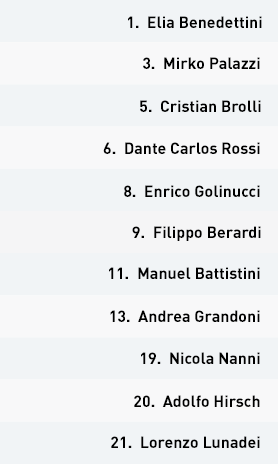 England were organised by their manager Gareth Southgate into a 4-2-3-1 formation that on this occasion was built on the double pivot provided by James Ward-Prowse and Kalvin Phillips. Their visitors, San Marino, defended during different periods with either a 6-3-1 or 5-3-1-1.

San Marino's commitment to using a low block meant England initially being content with retaining possession in deeper territory in an attempt to draw San Marino towards the ball. Central defenders Conor Coady and John Stones prioritised keeping the ball – which England dominated and attempted to spread across the pitch at pace – in wider areas. Mason Mount would also move into deeper positions to receive, to support Phillips and Ward-Prowse, and to tempt opponents to follow him.

In an attempt to progress possession, players regularly advanced ahead of it; Ward-Prowse, for example, sought to join attacks after playing the ball wide, and had the freedom to do so because Mount's willingness to move deeper gave England both defensive security and overloads in wide areas. The relationships that existed between full-backs Reece James and Ben Chilwell and wide forwards Jesse Lingard and Raheem Sterling were also influential, because the high starting position of England's defenders contributed to those overloads, and not least because of San Marino's reluctance to commit players to those areas. Those wide players worked to offer balance in the channels; when James occupied a high and wide position, Sterling would do the same from the left, in turn encouraging Lingard to move into the inside right channel and Chilwell to do the same from the left.

Their opening goal, scored by Ward-Prowse, took advantage of space that existed in front of San Marino's low block, inviting him to receive, run from deep, and attack with momentum. Mount mostly hovered in the central areas, and his positioning meant him contributing in both defence and attack and consistently creating passing lanes between himself and the in-possession player.

San Marino's hesitation when required to defend those wide areas gave England both time and space in the channels, and the freedom to commit numbers forwards to both occupy the visitors' defenders and create a territorial advantage that meant them overloading midfield and their attacking players occupying positions outside of their opponents' field of vision. The grasp of possession Southgate's team had also meant them dictating the tempo of play. Even when not being pressed they moved the ball with aggression and speed and occupied space across the width of the pitch.

England, regardless, increasingly became aware of the need to change the point of their attack. San Marino's low block and limited pressure made their defensive lines difficult to penetrate, so Phillips and Ward-Prowse contributed to England transferring the ball and taking advantage of the space that existed in wide areas, and therefore forcing San Marino to defend more reactively, often via blocking the flight of the ball.

The visitors later became more aggressive, via moving into a 4-2-2-2 and putting more pressure on the in-possession player, but England's ability to continue to move the ball at pace meant them progressing the ball through or around their defence. That they controlled almost the entirety of the game to the extent they did perhaps should have led to them winning by an even wider margin.
In pictures

San Marino's head coach Franco Varrella set his team up in a 4-2-3-1, though they were without possession for lengthy periods. England rarely strayed from that same starting shape.

The visitors played with patience. From the starting position of a goal kick they alternated between playing out from defence and playing the ball long – the latter often if their goalkeeper Elia Benedettini was attempting to relieve pressure on the defenders in front of him and targeting gaining territory in the midfield third.

Upon regains they sought to quickly transition into attack and to take advantage of any spaces or disorganisation that existed in England's shape, but England's high press often negated them doing so. Their striker, Nicola Nanni, sought to occupy spaces in front of him in the hope of chasing balls played in behind, but he too often became isolated and struggled to regularly take the ball.

On the rare occasions San Marino advanced into the attacking third, they sought to play with speed and therefore to send the ball into the penalty area at the earliest possible opportunity. Their attacking players maintained positions outside of and behind England's defenders, with the intention of forcing them to adopt different positions, open their body shapes, and be more reactive to the flight of the ball.

When the ball was wide they attempted to penetrate to between the relevant central defender and full-back, but pressure from England's defensive unit forced the receiving player to operate with their back to goal, and therefore made it difficult for them to execute passes with quality and often lose possession. If attacks were instead being built from defence, their defensive midfielders Enrico Golinucci and Lorenzo Lunadei worked together to create passing lanes for those defenders to play out from, but their most common approach remained playing beyond England's defence.

That they prioritised playing with width mattered little because of the numbers they retained behind the ball. England, by extension, also effectively used the touchline like an additional defender. San Marino simply found it difficult to retain the ball against the pressure they were encountering, and because of how deep they were sat when regains were made had too far to travel before they could pose a threat.