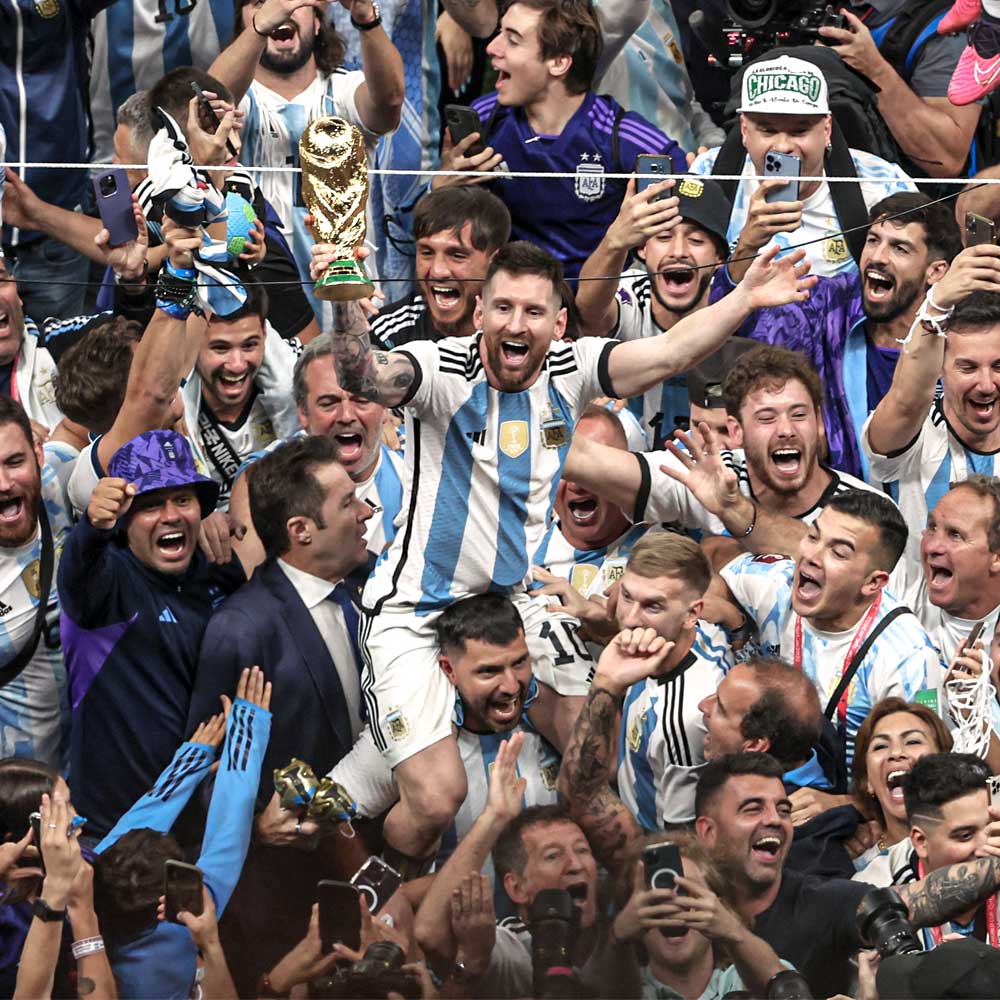 The curtain came down on the 2022 World Cup in Qatar in the most dramatic fashion as Argentina and Lionel Messi ended their wait for a triumph together on the grandest stage. The build-up to the match was dominated by talk of the battle between the two biggest stars in world football at present, as Messi took on Paris Saint-Germain teammate Kylian Mbappé, and the game itself lived up to expectations, both on an individual and a collective level.

Argentina were far the better team for 80 minutes, with Messi putting his side ahead from the penalty spot and Ángel Di María scoring a brilliant team goal to double their lead. France were decidedly below par, meanwhile, and took until 70 minutes to have their first shot of the tie, but when you have a player like Mbappé in your team, anything can happen. They were given a lifeline when Randal Kolo Muani won a penalty and Mbappé converted, and then Mbappé scored a sensational second to make it 2-2.

The drama wasn't done there, though, with Mbappé cancelling out another Messi strike in extra-time to send the game to penalties. Aston Villa goalkeeper Emiliano Martínez was the hero for Argentina – not for the first time – saving from Kingsley Coman before some remarkable gamesmanship preceded Aurélien Tchouaméni sending his spot-kick wide. Argentina scored all four of their penalties to secure their first World Cup win since 1986.

Argentina used a 4-3-3 structure, and threatened most down their left in the first half. Ángel Di María held the width, often receiving in space as number 8 Alexis Mac Allister pushed higher and occupied areas inside France right-back Jules Koundé. Left back Nicolás Tagliafico pushed forward, forcing Ousmane Dembélé to recover, but he was careful not to crowd Di María and leave him in space to isolate Koundé. On Argentina’s right, meanwhile, Rodrigo de Paul moved inside to create a double pivot with Enzo Fernández, and Mac Allister joined Messi and Julián Álvarez in a front three. Right-back Nahuel Molina then had significant space to push into – particularly because Mbappé didn't track back (below) – but he struggled to have much impact in possession. Di María’s tricky dribbling won the penalty which Messi converted to put Argentina ahead.

Mac Allister advancing through the left inside channel and Álvarez pushing France’s last line deeper gave Messi space to receive and two key options to pass to and combine with in central spaces (below). These players joined forces with the double pivot to overload the French central midfield three, and this helped lock France into their own half for remarkably long periods. Messi received between the lines time and again and continually found Di María out wide on the left, who made runs in behind. Messi, Mac Allister and Álvarez then linked up superbly to create Argentina’s second from an incisive counter-attack from deep, with Di María providing the finishing touch after coming in from the left.

Argentina settled into a much deeper block for the second half as they protected their lead, and they attacked on the transition  – mainly after midfield regains. The high and wide positions that Di María took up (below) proved a useful outlet for the midfielders to target with switches from the right or through quick, forward passes from regains on the left. Álvarez stretched the pitch through the centre, and was supported by Mac Allister, who provided direct runs from central midfield and ended up as the highest player when Álvarez moved wide to support Di María. Once Di María was taken off, though, Argentina lacked a transitional threat out wide, with De Paul and Marcos Acuña lacking the pace or dribbling ability to penetrate into the final third after a midfield regain. This allowed France to regain momentum in the game, and work their way back into it.

Leandro Paredes came on for Argentina in central midfield, and he provided line-breaking passes which shifted the momentum back Argentina's way. He dropped into the back line to help build around France’s front line of two and find Fernández, who was now the single pivot (below). Messi, Mac Allister and Lautaro Martínez provided some central combinations that Argentina had lacked since early the first half of normal time, and Messi eventually grabbed Argentina's third goal, finishing from the rebound after Martínez’s powerful effort was saved. Argentina’s narrow front three exploited the gaps around their opponents' central midfield of two, and France were very nearly made to pay for their very attacking shape in extra-time.

Back line of three

France converted their defence in their 4-2-3-1 to a back line of three as Theo Hernández pushed forward from left-back. Mbappé then moved inside to get  closer to Olivier Giroud. Antoine Griezmann pushed higher and moved across to provide support on the other side of Giroud, with Ousmane Dembélé then holding  the wide on France’s right (below). The double pivot of Adrien Rabiot and Aurélien Tchouaméni struggled early on, only able to link defence to the front live of five by building around Argentina’s front three. From here, France had little luck working the ball back inside as Argentina pressed well in the wide areas.

Lack of quality between the lines

Like Argentina, France often placed three players centrally between the lines to receive. However, the aggressive Argentine press and poor passing and securing of the ball meant France were unable to find Giroud as France’s highest attacker. This meant Griezmann, Mbappé and Dembélé all struggled to get on the ball in any space away from pressure in central spaces (below), and France did not register a single attempt on goal in the first half. It was the polar opposite of what we saw from Argentina’s three players between the lines. Giroud and Dembélé were hooked five minutes before half-time, with Mbappé moved to up front, Marcus Thuram added on the left and Randal Kolo Muani playing on the right.

Argentina’s narrow 4-3-3 mid-block limited access into France’s pivot players, with Griezmann in particular struggling to receive behind Argentina’s front three. Argentina’s central midfielders did well to track any players who dropped short towards the ball and crowded them out very effectively (below). France had most joy building around the outside of the Argentina structure but, again, Argentina's central midfielders aggressively moved across to cover the space inside the full-backs. France then made little or no progress into the centre of the pitch in the final third for the majority of the match.

France improved just in time to get back into the game, with Mbappé moving from a central position out to the left, and direct runs from Thuram and Muani adding more presence in the penalty area. They converted to a 4-2-4 (below) when Kingsley Coman was brought on, and their front line provided clever, penetrative movements and pace that troubled Argentina's back line for the first time in the match. Outstanding combinations through the inside channels after their wide build-up led to their first big chances, and Mbappé scored twice in two minutes to level the scores.

France’s front four pinned Argentina back, with their attackers finally able isolate defenders as a result. France then moved the the ball forwards as quickly and efficiently as possible in extra-time with penetrative forward passes, often skipping out their double pivot (below). Even if these balls didn't work directly, the energy and aggression of their front four led to a few regains in midfield and meant France kept up some pressure on their opponents. Argentina’s attacking substitutions helped shift momentum again, though, with France’s wingers forced to work back more often, and their 4-2-4 became a 4-4-2. Yet despite Argentina scoring, Mbappé completed his hat-trick with a second penalty, and the game was taken to penalties. The rest is history.