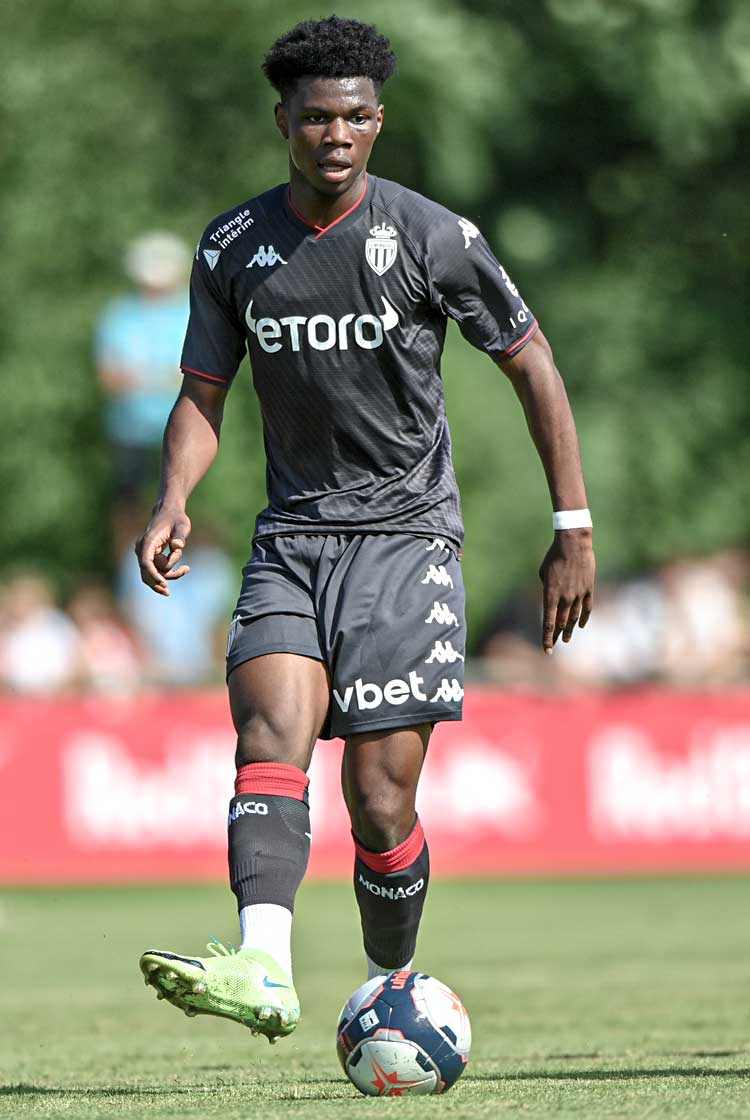 Monaco have a long and impressive history of producing and developing some of French football’s greatest ever talents. Kylian Mbappé, Patrice Evra, Thierry Henry, Lilian Thuram, Bernardo Silva and George Weah all spent significant periods at the club in their youth before making a big, career-defining move. The biggest and best teams always have one eye on Monaco as a result, and it is no surprise that their latest star man, Aurélien Tchouaméni, appears as though he will follow suit and make the step up to one of Europe’s major players.

Signed from Bordeaux in January 2020 for £16m shortly after his 20th birthday, Tchoaméni has established himself at international level under Didier Deschamps, a manager who knows better than most what it takes to succeed in central midfield. “There are quite a lot of new players,” Deschamps said after Tchouaméni’s first start for France in 2021. “They should use Aurélien as an example and perform the way he did.”

Tactical analysis
A right-footed central midfielder, Tchouaméni can play either as six or an eight. He has a forward-thinking mentality that means he regularly breaks lines with passes through or over the opposition, while he also progresses play with diagonal switches. He disguises passes expertly, and uses that skill to good effect to filter passes through to more advanced teammates.

He is brilliant at playing reverse passes across his body or playing balls around the corner to a teammate he has spotted when scanning before he receives the ball (below). This vision means he can spot passes many others would not, and he times these balls exceptionally, eliminating as many opponents as possible with one pass.

He is happy to hold on to the ball in central midfield to draw opponents towards him and create space for teammates between the lines. There is a maturity to his judgement of when to do so and when to release the ball to avoid losing possession when his teammates have advanced to receive the ball beyond the opposition's midfield. Again, he disguises passes with great skill and can cuts several opponents out of the game with brave, reversed passes through the heart of the pitch (below).

Out of possession, Tchouaméni is combative, aggressive and uses his speed to close down opponents quickly. He has long legs, and his quick reactions and speed across the ground mean he constantly makes interceptions. He is also more than happy to engage an opponent in an individual duel, and posts consistently high tackle numbers as a result. He reads the game exceptionally well, and makes good decisions as to when to come out and engage the ball and when to hold his position.

There are occasions when Tchouaméni goes to ground to slide in and make interceptions that would otherwise be beyond his reach (below). In these instances he will try to find a teammate and start a move for his team having slid in, rather than trying to retain the ball himself. In all, he is an incredibly effective ball-winner, and that side of his game is certainly his biggest strength.

He is difficult to beat in a one-on-one, jockeying his opponent and then able to push off in either direction. Once someone attempts to beat him, he uses his arms and upper-body strength to get himself between opponent and ball. He is clever about when to stretch the rules of the game and tug an opponent back and commit a tactical foul to avert danger, but he is usually fast enough to catch his opponent up.

Playing as a pivot

For Monaco, Tchouaméni mainly plays as a defensive midfielder alongside Jean Lucas, Youssouf Fofana or Eliot Matazo in either a 4-2-3-1 or 4-4-2, while for France he has struck up what looks like it could be a successful partnership with Paul Pogba. For his club, overlapping full-backs provide the attacking width, and when Caio Henrique pushes forward from left-back and the left-sided forward drifts infield, Tchouaméni will drop in behind them. From that position, he will aim to get the ball to the two players ahead of him on the left.

His ability to play passes into Henrique’s path (below) has proved particularly valuable for Monaco and helps them progress around or over teams who sit in a compact block. He has also proven useful with switches of play out to the right from these positions.

Monaco regularly attack with an asymmetrical shape with right-back Ruben Aguilar holding his position or tucking in to form a back three. If Tchouaméni’s central midfield partner sits in front of the defence, he then has more freedom to provide support for the attack. However, he always remains switched on to the possibility of a defensive transition, and will keep the fact he has to cover the left-back slot in mind when venturing forwards.

An asset all over the pitch

Despite the fact that he has so much defensive responsibility and consistently ranks among the top Monaco players for both tackles and interceptions, he also makes telling contributions in the final third. He regularly takes up a position as the slightly deeper of their two defensive midfielders (below), and as a consequence is more responsible for providing cover should a midfield teammate be caught out of position, and for fighting for second balls in front of the defence if the opposition go direct.

When he moves out to press near the touchline, he helps his team lock play out wide, shutting down the space the opposition have to operate in. Should his direct opponent then attempt to cut back infield, he will then commit to an aggressive challenge before a quick recovery run into his slot. When he wins the ball, he will look to play a forward pass if a more advanced teammate is available straight away. If no such pass is on, Tchouaméni will make a square or backwards pass to secure possession for his team.

The young Frenchman is already taking both Ligue 1 and international football by storm, and links to Europe’s top clubs were always likely to follow. He is destined for the elite, and it will surely only be a matter of time before he is playing regularly in the Champions League and challenging for the game’s biggest titles.