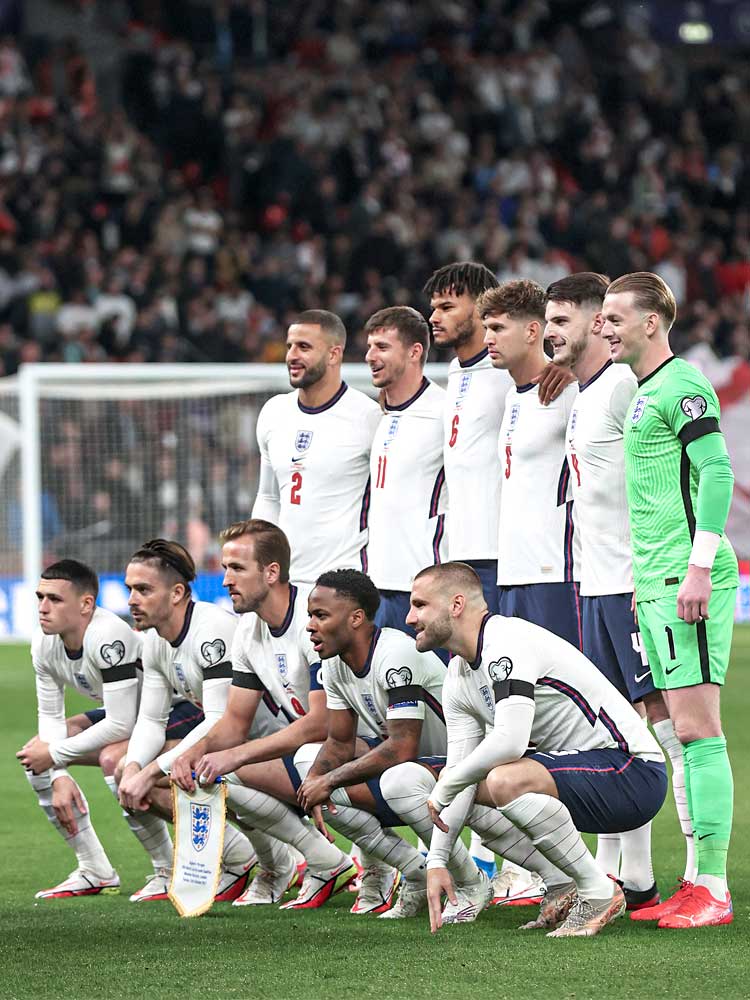 Gareth Southgate's tactical experiment failed to deliver England's latest victory in their bid to qualify for Qatar 2022, but they remain first in Group I despite being held to a draw by Hungary. Southgate selected Mason Mount, Phil Foden, Raheem Sterling and Jack Grealish in front of Declan Rice, but for all of their undoubted talent, they struggled to create goalscoring opportunities, and to the extent Grealish and Harry Kane were both substituted as Southgate pursued a winning goal. Roland Sallai had given Hungary, whose supporters violently clashed with stewards and police, the lead from the penalty spot after a foul by Luke Shaw on Loïc Négo, but after John Stones headed England's equalising goal there rarely looked likely to be another. "I don't think we played at the level we have done and Hungary defended very well," Southgate said. "We didn't do enough to win."

Hungary's shape denied England space
England were confronted with Hungary's out-of-possession 5-2-3 which, led by a narrow front three willing to concede wide territory, focused on securing the middle of the pitch (below). Hungary's wide forwards Dominik Szoboszlai and Szabolcs Schön sought to limit access into the half-spaces England's creative midfielders might otherwise have wanted to move into to receive between the lines. Hungary's central midfielders Ádám Nagy and András Schäfer provided further defensive security around Declan Rice, and remained willing to follow those withdrawing from England's attacking line. England were, therefore, too often forced to circulate possession among their defensive line to create potential spaces through which to penetrate.

England struggled to take advantage of their spare man
Hungary's jump press presented England with a potential opportunity to progress possession. Though Hungary's front three played with patience and to retain their narrow shape, Roland Sallai was encouraged, when it was suitable to do so, to move to press either John Stones or Tyrone Mings. Ádám Nagy, in turn, would take Rice to prevent him from receiving on the half-turn, and it was that England should have capitalised on, by bouncing possession into Rice when his back was to goal so that he could play it to the spare central defender, and that central defender could play it to either an advancing full-back or attacking midfielder in a half-space (below). They, regardless, needed to play the ball with increased speed.

England's technicians were successfully negated
Hungary's success in frustrating England led to Jack Grealish, Phil Foden or Raheem Sterling withdrawing into deeper territory to receive possession. It proved difficult for them to find their most creative players in advanced positions, so by them moving elsewhere they could run at Hungary's defensive block, making it more compact and creating space elsewhere – Sterling scored against Czech Republic at Euro 2020 after Bukayo Saka made one such run. Hungary instead targeted the in-possession player with numbers (below), forcing him across the pitch and limiting his attacking potential.

England moved the ball too slowly to stretch Hungary
Southgate's team performed closer to their potential when they spread the ball at speed, and via fewer passes, as Grealish and Luke Shaw demonstrated early on (below) when combining to release the latter to play a dangerous ball across goal. Similarly early in the second half, Foden moved to outside of Hungary's defensive block and drove forwards from the right before impressively feeding Sterling. It was when England played more vertically – often doing so after a switch of play – that they threatened. Hungary's defensive line regardless successfully protected the penalty area, and consequently limited England's goalscoring chances. England therefore needed to more regularly move the ball with increased speed to complement the less predictable positioning of Sterling, Foden and Grealish.

Hungary's grasp of possession suffered against England's press
The visitors attempted to play a possession-based game from their goal-kicks, and encouraged their central defenders to build from the back. Ádáms Lang and Szalai adopted positions in the penalty area, Ákos Kecskés drifted to wide on the right (below), and Schäfer and Ádám Nagy sought to link play in midfield. In the first half Hungary were suffocated by England's high press; England's front three closed them down with intensity, forcing technical errors that led to the ball being kicked out of play, and turnovers in the attacking half.

Hungary's six-point attack
When they reached the attacking half, Hungary offered six points of attack (below) – typically their wing-backs, front three, and a midfielder, which left the spare midfielder and their back three to provide security from behind the ball. There were also occasions when their wider central defenders played with increased ambition and advanced to provide a further number, in the knowledge that they were less likely to be tracked; if one did so, both central midfielders normally remained behind the ball. For all of the numbers they were willing to commit to attacks, however, they proved limited in possession, and recorded only one shot on target. Their desire to build from the back was also complemented by them attempting to play directly to Sallai, after which those in the attacking half targeted second balls. Their width, similarly, contributed to the creation of opportunities from which to cross, and potentially win set-pieces.

The importance of width
Hungary regularly sought, as they built possession, to draw England into midfield before prioritising attacking through wide territory. With their in-possession 3-4-3 against England's 4-3-3, they had increased attacking potential when they forced England to become more compact. Their ball-side attacker regularly withdrew into midfield, taking a central defender with him and making England's midfield more compact; when their far-side central midfielder was then taken by England's far-side forward, Hungary proved capable of working possession infield and then switching it wide before England's other wide forward could adjust. If play was switched via an advancing central defender he was likelier to receive with time and space than the wing-back in front of him, who was immediately closed down by his opposing full-back.

Moments of transition
The in-possession limitations of Marco Rossi's team meant that they also targeted countering during moments of transition. When a clean regain was made they attempted to quickly release those making forward runs (below), and to capitalise on the spaces England had vacated at the point of the regain. They prioritised forward passes when they did so, and targeting gaining territory if a good quality attack wasn't likely – possession in the attacking third had the potential to create chaos inside or around the penalty area, or to lead to set-pieces.