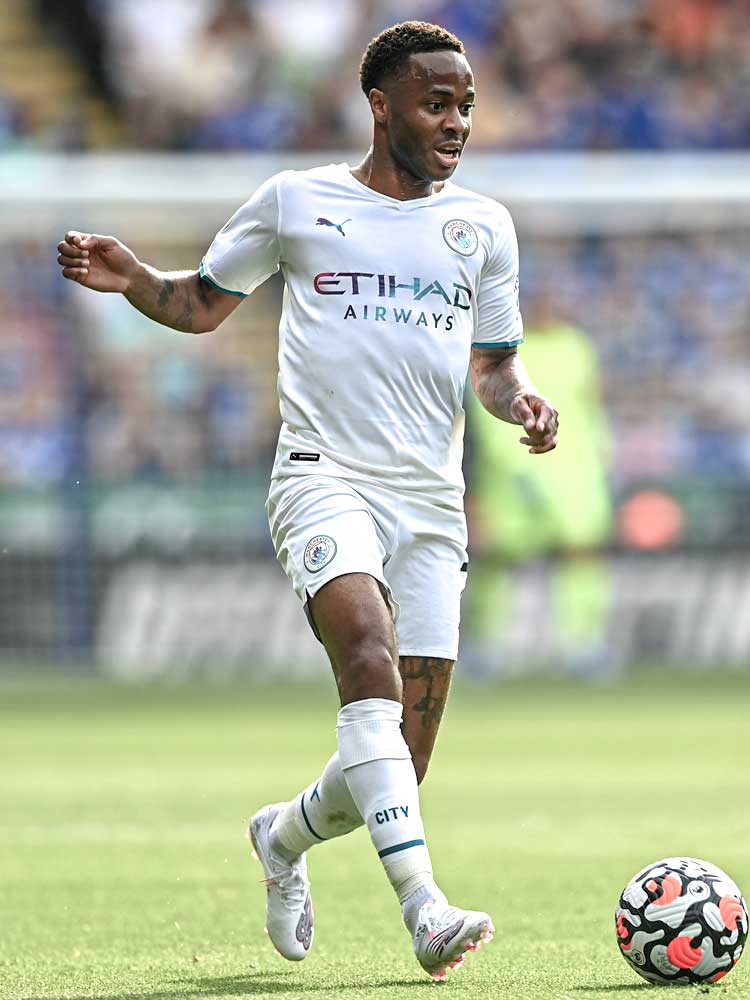 Profile
Raheem Sterling became the most expensive English player of all time when Manchester City signed him from Liverpool in 2015 and, as always with a big-money move, he did so amid high expectations. There were those who doubted whether he was worth the eventual £49m fee, but his improvement and the trophies won under Pep Guardiola have ended debates over his value to one of the best teams in Premier League history.

In scoring his 100th goal under Guardiola in February 2021, Sterling joined an elite group – Lionel Messi and Sergio Agüero are the only other players to have achieved that feat. He is so important to Guardiola that he almost never misses a game. “He's an exceptional player,” Guardiola said. “He plays all the minutes for us. Of course, there will be a moment where he takes a rest but he is such an important player that we cannot leave him out.”

Tactical analysis
Sterling has long been a huge threat in one-on-one situations, but he has become so much more than that under the guidance of Guardiola at City. From his earliest days in Liverpool's first team he used his speed and acceleration to beat opponents, but over time defenders adjusted to his preference to attack on the outside. Since moving to City he has worked on cutting back infield and has become deadly when doing so. Sterling is equally dangerous on either wing and his ability to go down the line or cut infield makes him not only particularly unpredictable, but capable of providing a better link with the lone central striker Guardiola prefers.

Sterling’s ability to effectively counter-press has also improved. At Liverpool, because of his speed, he was adept at applying pressure, but his pressing has become more intelligent. He has rarely registered huge numbers when recovering possession, but he is better at forcing defenders into smaller spaces and the rushed clearances that lead to regains, even if Sterling doesn’t actually directly win the ball very often. Both in winning the ball and in attacking situations, he has improved how he uses his body. He is pushed off the ball less often and is able to hold defenders off while dribbling; defensively, those improvements have also helped his team to more consistently recover the ball high up the pitch.

Sterling’s greatest strength, regardless, is the threat he provides on goal. He might not have quite the finishing ability of Jamie Vardy or Pierre-Emerick Aubameyang – who, along with Danny Ings, were the only players to outscore Sterling in the Premier League in 2019/20 – but his movement (above) is comparable with the very best. The frequency with which Sterling reaches low balls across the face of goal is no coincidence – he times his runs into the area to perfection and scores a huge quantity of goals from tap-ins from very close range after a square ball across the face of goal (below), the type of goal that Guardiola's City scores extremely often.

His expected goals total for 2019/20 was 19.80 – almost exactly the same number as the 20 goals he recorded, and significantly higher than Vardy, Aubameyang and Ings. Sterling does not rely as much on exceptional finishing as his rivals who outscored their xG total by far more than him; he instead gets himself into positions where he is likely to score thanks to his understanding with his teammates, and successfully converts most of the chances he receives.

Role at Manchester City
Sterling makes most of his appearances on City’s left, where with his improved shooting after cutting infield and on to his right foot he has become more dangerous. He is almost as threatening from the right – Phil Foden’s emergence towards the left of City’s attack meant Sterling spent much of 2019/20 there – and he has also played through the middle as a false nine.

Guardiola asks his wide attackers to stretch the pitch by holding their position during build-up play, but they remain key even when play appears to be a long way from reaching them. They have to be alert to the opportunity to burst diagonally from outside to in and towards goal behind their opposing full-back if a midfielder spots the chance to play them in, and it is that kind of explosive movement that can turn a slow build-up into a quick, devastating attack that catches the opposition off guard (below). Sterling is so in sync with his teammates that he knows exactly when to spring into life and sprint towards goal. The combination of his well-timed runs and speed that few defenders can match – particularly given they have to turn back towards their own goal – means he gets in on goal with remarkable consistency.

Sterling is just as comfortable receiving to feet and taking his opponent on. City set up in possession with their front three spread right across the pitch to try and stretch the opposition's back line and create as much space for their wide forwards to operate in. Sterling can then either threaten the space in behind or pull away from his direct opponent to get on the ball and run at them (below). Able to go infield or down the line at high speed, he is a nightmare to defend against.

The 20 league goals Sterling scored in 2019/20 represented a career best, but a consequence of his increased focus on scoring was him recording his lowest ever total of assists. In 33 appearances for the Premier League’s highest-scoring team he managed just one.

His role for City is closer to that of a second striker than a traditional wide player – he often moves into positions between the lines to link play, and his focus when City have the ball is to try and finish moves off. Only three players had more shots than Sterling in the Premier League in 2019/20 – all also made more appearances than him – and he ranked 24th in the league and fifth for City for chances created. City have such creativity in Kevin De Bruyne, Foden, Bernardo Silva, Jack Grealish and Riyad Mahrez that they need not worry about Sterling’s lack of assists, but given how often he has the ball in the opposition's penalty area he could improve in that regard.

Sterling continues adding to his game and, having developed into one of the Premier League’s most deadly goalscorers, there is little reason to think he cannot record more assists. He is undoubtedly among the very best attackers in the world, and while City continue to strengthen all around him, he remains a key figure in their expensively-assembled attack.