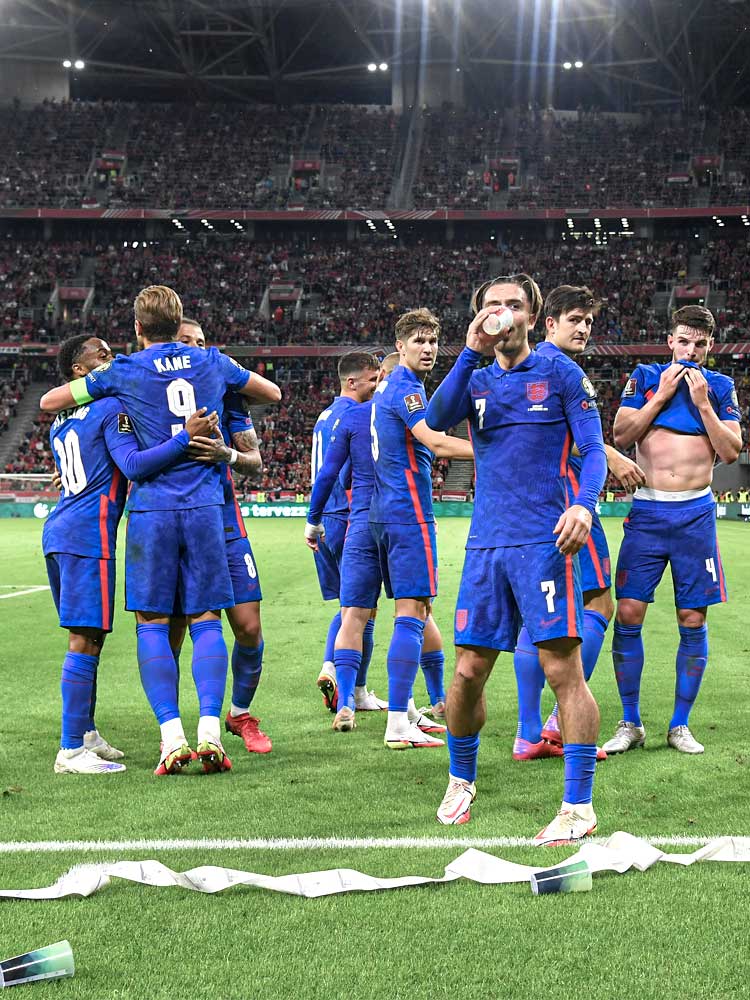 England recorded their fourth win from four to ensure they lead Group I by five points in their bid to qualify for Qatar 2022. A frustrating first half that followed England's players being booed for taking the knee before kick-off, and later objects being thrown and racist chanting, was followed by a commanding second in which their dominance was rewarded with four goals. Raheem Sterling, perhaps the player of Euro 2020, then Harry Kane, Harry Maguire and Declan Rice, all scored. Discussing the atmosphere at Puskas Arena, England's manager Gareth Southgate said: "Everyone knows what we stand for as a team, and that's completely unacceptable. The world is modernising and although some people are stuck in their ways of thinking and their prejudices, they're going to be the dinosaurs in the end because the world is changing."

Hungary manager Marco Rossi set his team up into a 3-4-2-1 formation. Their visitors, England, defended with a 4-3-3.

From central midfield András Schäfer regularly withdrew to in front of Hungary's back three. He did so in the knowledge that their wing-backs were instructed to advance and provide their attacking width, without compromising the movements of Roland Sallai and Dominik Szoboszlai, their two numbers 10s who travelled through the inside channels to alongside Ádám Szalai.

With László Kleinheisler advancing from central midfield, Schäfer, as their defensive midfielder, had increased space to operate from, and he often capitalised by drifting across to the right inside channel. Sallai travelled wider towards the left than did Szoboszlai towards the right, presenting Bendegúz Bolla with space to combine and support direct passes played towards the right.

Hungary's desire to build with a back three contributed to England applying a high press. The wide forward furthest from possession moved infield; Mason Mount, England's 10, often drifted across to block the left inside channel, and Kalvin Phillips pressed with intent through the inside channels, where he joined Mount between their two wide forwards. There were also occasions when Phillips moved to prioritise Schäfer; Kyle Walker and Luke Shaw, in turn, took their opposing wing-backs.

Their struggles to establish possession contributed to Sallai remaining advanced to form a front two with Szalai, and Szoboszlai withdrawing into central midfield, and therefore that front two leading counters that progressed through the centre of the pitch and then targeting those making runs from midfield. They, regardless, were confronted with three defenders every time they did so, so unless they succeeded in switching play to in behind the adventurous Shaw, they struggled to reach the final third.

It was when England's build-up structure changed, and when Hungary's defensive structure changed, that Hungary's counters briefly came through both sides of the pitch and involved increased numbers. England then adjusted to defend with a 4-2-3-1, via Phillips defending from deeper territory.

The visitors' ability to largely prevent balls into Schäfer regularly undermined Hungary's attempts to settle in possession. Mount worked to prevent access between their attacking line, and behind him Phillips and Declan Rice covered further central access. If that meant it became easier to feed their wing-backs, those wing-backs created little.

England were organised by their manager Gareth Southgate into a 4-2-3-1. Their opponents, Hungary, defended from their 5-3-2 with a low block.

Raheem Sterling provided England's width towards the right; towards the left, Luke Shaw advanced from left-back to do so, and Kyle Walker, Harry Maguire and John Stones formed a back three. With Declan Rice operating as a single pivot when they did so, Kalvin Phillips advanced through the right inside channel, and Mason Mount and Jack Grealish rotated or withdrew into deeper territory to encourage Shaw to push further forwards.

Hungary's wing-backs moved with aggression through wider territory, and their midfield three worked to cover against access back infield, but the fluid movements and rotations England offered towards the left, complemented by Grealish's ability to carry the ball under pressure, meant that they regardless progressed possession. Against that, Hungary became more content to defend with a lower block.

The variety of Harry Kane's movements – both in behind, and moving to receive to feet – enhanced England's potential towards the left. Towards the right, Sterling's willingness to dribble, and Phillips' penetrative off-the-ball runs, made them significantly more direct.

There were occasions when Kane's movements meant Mount or Grealish instead became their most advanced attacker. The numbers they offered in the attacking half and the effectiveness of their combinations ensured that England continued to progress towards the left, and often that Kane was in place to become the target of cut-backs or passes back infield. Kane's movements also contributed to England's ability to release Sterling wide on the right, and to Phillips' desire to run through the inside channel, but their reduced numbers towards the right often meant that their progress slowed once they reached the final third.

When Walker advanced from defence – England either built with two central defenders, or Phillips withdrew into their back three – they posed a greater threat on the right, and Kane and Mount increasingly rotated there. When they did so, Sterling drifted infield, and Walker provided overlaps and moved in behind. England's first significant goalscoring chance came when Walker played a through ball through the right inside channel into Kane.

When Hungary changed to instead form a 5-2-3, however, Phillips increasingly withdrew into deeper territory to enhance England's ability to access the inside channels and spaces between the lines. Southgate's team then took the lead on the counter, when Grealish and Mount combined on the left to provide the cross from which Sterling scored. That lead was doubled when Mount covered Hungary's single pivot, forcing Hungary to build with more direct passes, and Sterling was presented with the chance to provide the cross from which Kane headed in.