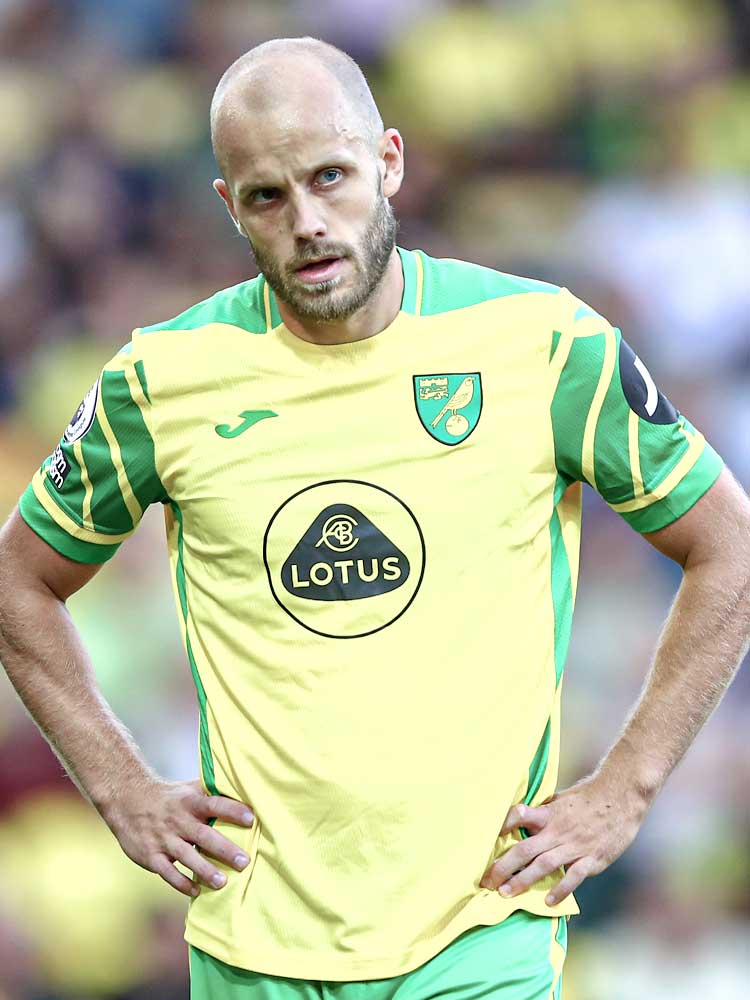 Profile
In uninspiring spells at Sevilla, Schalke and Celtic, Teemu Pukki struggled for goals for a significant portion of his career. He changed that at Brondby between 2014 and 2018, however, earning a move to Norwich, where he has scored consistently. In Daniel Farke’s ambitious team, Pukki is perfectly at home, the club’s top scorer in each of his first three seasons at Carrow Road.

Their bold, attacking football suits Pukki, and Farke appears to be the right manager to get the most out of the Finn. Farke is in no doubt about Pukki’s ability. “Teemu for me is the best player and the best striker in the Championship,” Farke said of the striker, 31 when they secured their return to the Premier League in April 2021. “He is selfless – (not only) his workload in terms of pressing and winning balls back, but also how he delivers goals, too.”

Tactical analysis
There is more to Pukki than his goal threat, but his runs in behind opposing defences is certainly the most significant aspect of his game. He is skilled at curving his movements to remain onside and also times his direct runs in behind well, too, always looking to exploit any disorganisation at the back.

Some strikers are only comfortable running in on goal from one side, which can restrict them if they are used as the lone striker. That is not the case with Pukki, who makes fluid movements across the pitch, but he usually prioritises the space between a central defender and full-back. By curving his runs from outside of the full-back into the space behind the opposition's defence he is able to run on to through balls diagonally towards goal. Pukki is just as capable, meanwhile, running between their two central defenders, moving on the blindside of the nearest defender to gain an advantage on his opponents (below).

He isn’t the quickest centre-forward around – although he certainly isn’t slow – but the timing of his runs is so well judged that he often manages to get in on goal against the odds. He delays his run to match the timing of the release, and is caught offside remarkably infrequently given how often he looks to run through on goal.

Close to goal, Pukki shows impressive composure and finishing ability. He rarely rushes his shots, and finds the corners of the net consistently. He scores a large proportion of his goals from close range and off of a first-time finish, but when he has time to set himself he likes to use an element of disguise when shooting. He often reverses shots across his body to send a goalkeeper in the wrong direction, while also attempting to hide the power and height of his shots. He uses minimal backlift and regularly finds the top corner of the net with his shots.

When he can’t get a shot off first time, Pukki is very skilled at keeping the time between his first and second touches as short as possible. Doing so means he can take advantage of goalkeepers moving into a set position after he takes his first touch by quickly shooting at goal (below).

He doesn’t often get involved in build-up play, and instead focuses most of his attention on threatening goal. However, his composure in front of goal also extends to the occasions he withdraws into positions to combine with runners. He is very calm on the ball, and shows good close control and good vision, too. He actually creates more chances than his persistently low assists tally would suggest.

Role at Norwich
As the lone striker in Farke’s 4-2-3-1, Pukki’s first responsibility is to make penetrative runs in behind opposing defences. He likes to stay close to goal, and spends lengthy periods stationed between centre-backs, pinning them back as far up the pitch as possible. Defenders are often forced back into deeper territory in an attempt to deny Pukki the space he wants to operate in, and doing so leaves spaces between the lines for Norwich's talented attacking midfielders to exploit.

Since Emiliano Buendía's departure, Todd Cantwell has become their most influential wide player in the attacking midfield three behind Pukki; Kieran Dowell favours the number 10 position;  the less creative and more functional Mario Vrancic and Marco Stiepermann are other options. Norwich’s full-backs are also encouraged to get forwards and support Pukki.

Pukki therefore often has lots of teammates around him. Norwich remain daring in how many players they commit forwards – something that certainly contributed to the high number of goals they conceded in the Premier League in 2019/20.

Norwich are admirably committed to playing a short-passing game, and with their full-backs providing their width, they aim to get the ball into the feet of their creative players in the half-spaces. From there, Pukki will pull away from his nearest markers, and the aim is to slip him in on goal (above). After Cantwell moves centrally – from outside to inside – it will generally be the case that Pukki moves in-to-out to get into a shooting position from wide. Even from those positions he is very good at finding the net.

It is rare for Pukki to stray too far from goal. Given the attack-minded nature of Norwich’s play, they have a large volume of shots, and it is Pukki’s job to prey on loose balls close to goal. He is quick to react to opportunities when the ball is bouncing around the six-yard box, and also to counter-press when the ball is lost. He scores a fair few poacher's goals as a result of that. A striker who had struggled for goals for much of his career, Pukki has found his goalscoring touch under Farke at Norwich.