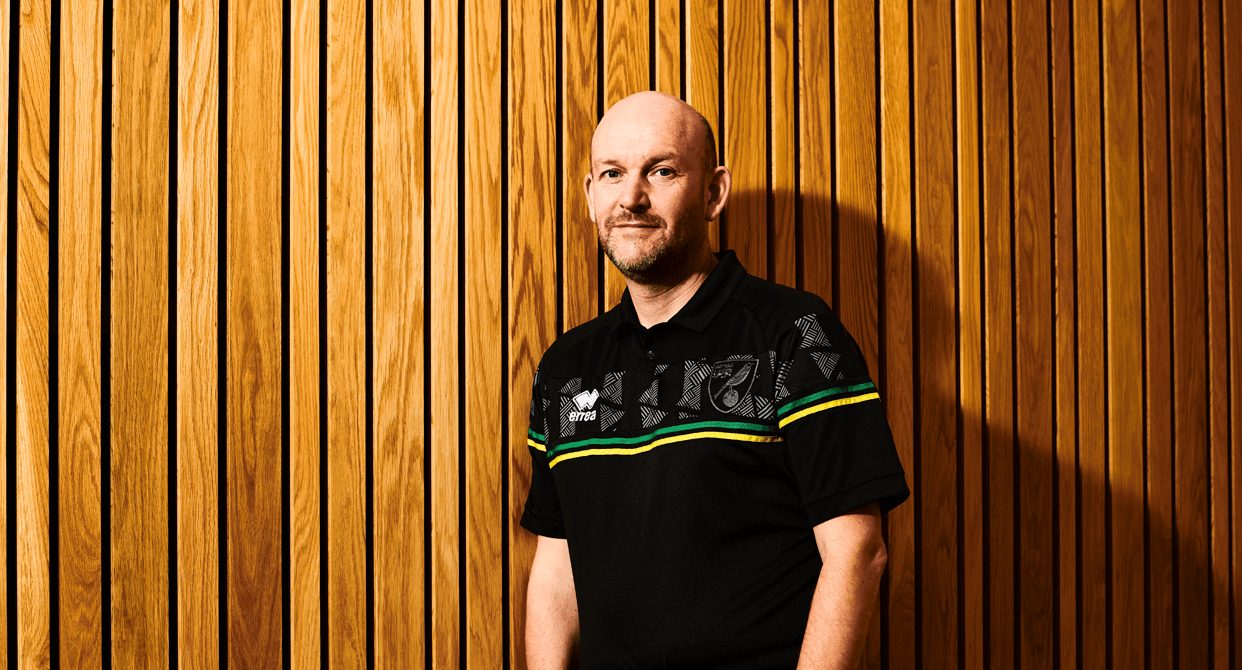 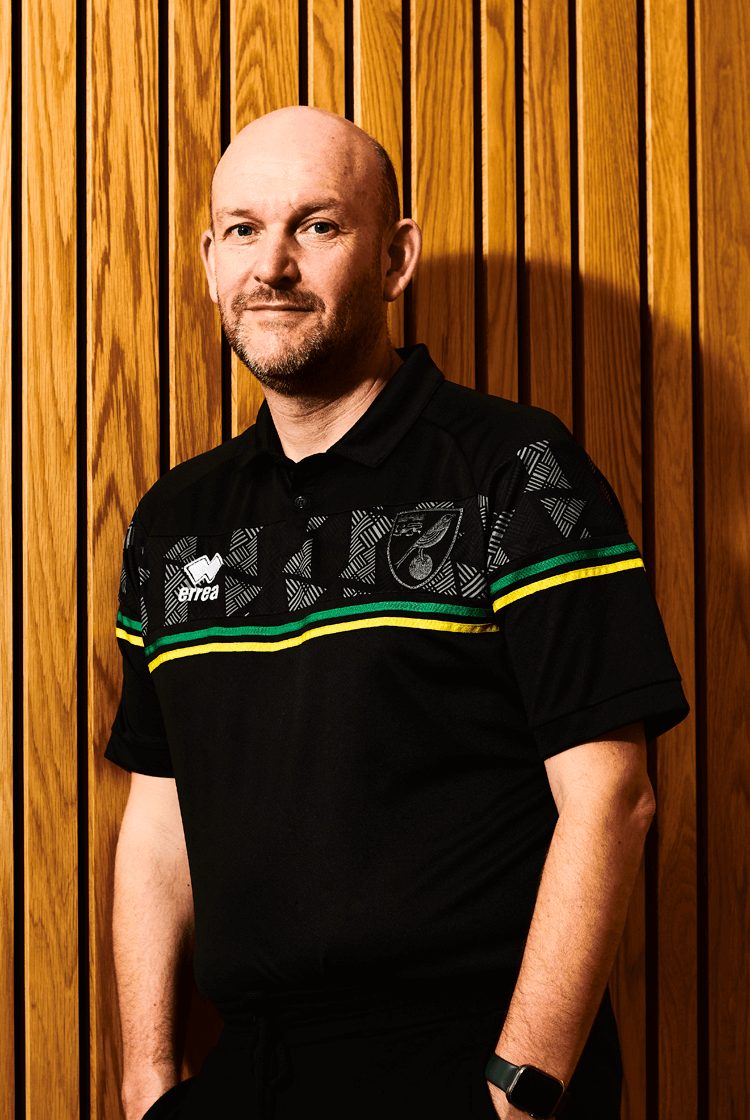 I wouldn’t be surprised at all if Max Aarons was playing Champions League football next year.

I’m not sure there’s a ceiling for him. There hasn’t been a single part of his journey so far where he hasn’t been completely in control or looked completely comfortable.

Growing up, it didn’t really matter where you played him – he was always just really, really good. Seven or eight out of 10, every single week.

When Daniel Farke first started noticing him, he just shot up. In a really short space of time, Max (below) went from the outskirts of the squad to nobody being able to believe the Norwich first team had been making do without him.

There’s no indication from Max that he wouldn’t be able to play at any level.

But we’re not concerned about that at Norwich. We have to be ready for a big bid to come in for him. It’s no surprise to us that he’s being talked about as a potential signing for some of the biggest clubs around.

We’re always planning for the future because we have lots of talented boys in the first team. When Ben Godfrey left for Everton, we had to be prepared for that. When James Maddison left, we had been developing Todd Cantwell and Emi Buendía to step up.

And, when we sell, our targets in that window aren’t necessarily for an immediate return. We might be selling a big player, but we’ll have been planning for that eventuality for a while.

The staff here at Norwich meet regularly to discuss succession plans throughout the squad. The club has been really good at preparing for, say, the Murphy brothers, Josh and Jacob, leaving. It’s a big part of our business model. We know we have to sell when the right offer comes along for a player, and a lot of strategy goes into that. Without selling we can’t survive – or thrive – as we do.

We always know that we have a few good lads coming through who might be able to step up when somebody leaves.

Todd Cantwell’s journey was slightly different to Max’s. He now looks far too good for the Championship, having excelled in the Premier League, but there was a point when we were a little worried about his development.

He had this unbelievable confidence and put in some sensational performances for the Under-23s, but then there were some games when he wasn’t as good. We started to think he might have plateaued.

It was time to change things up for him.

While Max just followed a smooth path to the first team, we decided to send Todd (below) on loan to a Dutch side called Fortuna Sittard. He helped them get promotion to the Eredivisie, came back and worked his socks off. His development since has been fantastic. Again, he just looks destined for the top.

There’s plenty of reasons we keep producing so many talented players from our Academy, which has Category 1 status. The first is that so much of our energy and resources go into development.

At Norwich, we don’t only place focus on their development as footballers, though.

As Head of Football Development, I’m responsible for the performance of the academy. So, anything to do with the players – training, coaching, sports science. I concentrate on player development. We have 31 full-time staff and some part-time, too.

We start with eight-year-olds and we run all the way through to the Under-23s. The younger players will only come in for an hour and a half a day, but we have a local school we work alongside – and we have host families who the lads stay with if they have to move. It means football isn’t the be-all and end-all for them.

We put of lot of work into giving our players other options. It’s hard, because they often put a lot of pressure on themselves to become footballers. But even if you end up being a top player, you might play until you’re 35. Then you’re probably going to live until you’re 80. That’s a lot of time to make up.

We try our best to make their lives as normal as possible away from football. Having a host family also gives parents another set of people to talk to about how their kid is doing.

We’ve got an expert staff. Education, player care, psychologists, sports science, physios; it’s a great support team for the players. We work as hard at stuff off the pitch as we do on it, because we certainly feel a sense of responsibility to these kids – and their parents, too, if they have moved away from home.

The Norwich academy is built on what is expected in the area. It’s about more than just football for a lot of people around here. There isn’t another big club nearby, and there’s a lot of interest in the players we produce, but the owners have a real interest in developing the young staff we have as well.

The owners, Delia Smith and Michael Wynn-Jones (below), are very big on that. They want the club to be working hard to produce its own players and producing good people.

We have something we call ‘The Norwich Way’. It’s about playing a high-quality, possession-based style of football – like Daniel does with the first team – and trying to produce players that fit into that style and might one day be able to play for Daniel. But it’s also about producing young people who fit into our culture.

Honesty and hard work are really important, and we don’t want egos.

“Wherever we can, we like to give our players opportunities. Young people tend not to let you down if you give them a chance”

If we’ve got a really talented kid who isn’t the right type of character for us, I’m under no pressure from above to keep them on. We don’t want disruptive figures.

Our dependence on youth isn’t only financial. There is so much interest and scrutiny on the club from the local community in the production of young players, that we have to have a focus on youngsters.

We played Manchester United in the FA Youth Cup in early 2020, and more than 3,000 fans turned up to watch. It’s a really big deal in the local area. The fans want to see kids coming through the academy.

We have a way of doing it that gives our kids a really good opportunity. They play a lot of football. We keep squads small where we can in order to give them the greatest chance of playing.

I’m not that bothered about league tables. We obviously want to win games, but at youth level it’s important to be tested. If one of our teams is winning game after game, the best players get moved up to the next age group. We almost don’t want to be winning every week.

We want our players to be winners, of course. We want them to hate losing, and if you’re not the type of person who wants to win every game, you shouldn’t be in the game. At the same time, though, our aim in the youth teams isn’t winning – it’s first-team debuts.

It’s great when I see someone get their debut in the first team, but I actually get as much satisfaction when our players go on to play elsewhere – even when we’ve released them.

It really shows a resilience and resolve on their part that is special. Them proving themselves gives me a great deal of satisfaction.

“We want our academy sides to play expansive football. We want our centre-backs to be left exposed at times, and be forced to learn to deal with it”

We had a player called Anis Mehmeti, who we released at 18 years old. He spent a year out of the game at college in London, and one year later he is playing for Wycombe in the Championship.

With the greatest of respect to someone like Max Aarons, he was always a special player. You just know he is going to make it – and that’s great, but we take a lot from the development of players after they leave us as well, and we follow them closely.

Wherever we can, though, we like to give our players opportunities. Young people tend not to let you down if you give them a chance.

We make sure they get enough minutes to develop, and we also give them a chance to get good grades in school too. We don’t want them to fail in any walk of life because of a lack of opportunities.

Just like the first team, we want our academy sides to play expansive football. We want our centre-backs to be left exposed at times, and be forced to learn to deal with it. We tend to play with only two in central midfield so that our players have to work hard and learn to deal with being overloaded.

The reason we play with two up front in every academy team is a bit different – but it’s a pretty simple reason.

We can’t buy top centre-forwards, so we aim to give ourselves the best possible chance of producing them.

There’s a running joke at the club that when a player comes in and tells us he’s a left-back, someone will say: “Let’s see what you’re like up front first.”

“If we’re going to be a self-sustainable Premier League side, we have to be doing something different to the rest”

We try to develop a pool of talent up front, and we’ve got some great young forwards coming through like Adam Idah (below) and Tyrese Omotoye. Even at younger ages, we have plenty of good forwards.

We’re looking for a certain type of centre-forward: someone who is quick, can go in behind, stretch the game and try to score goals. We have a history of producing good creators like Emi, Todd and James Maddison, all of whom can play at seven, 10 or 11 – so we need to manufacture players to finish off the moves.

If we can produce a player who scores goals in the Premier League, they will be worth far more than a player in any other position, and that is a big part of our thinking.

It’s working so far, and we’re confident it’s the best way for the club to approach development.

We aren’t the richest club, but where we can spend, we put a lot into research and development. We’ve just redeveloped the training ground for about £10m, and we’ve got a Soccerbot360 coming – that’s a visual-learning machine that gives players a 360-degree match-like view to work on their scanning. We’re also in the process of making a performance centre. We spend our money where we think it will give us the biggest long-term benefits. We want to be innovators.

If we’re going to be a self-sustainable Premier League side – which is what we want to be – we have to be doing something different to the rest.

An awful lot of time and effort goes into working out what exactly we have to do to stand out from the crowd.

At the moment, we’re having a lot of success, and everyone at the club – from top to bottom – is working together to have plenty more.