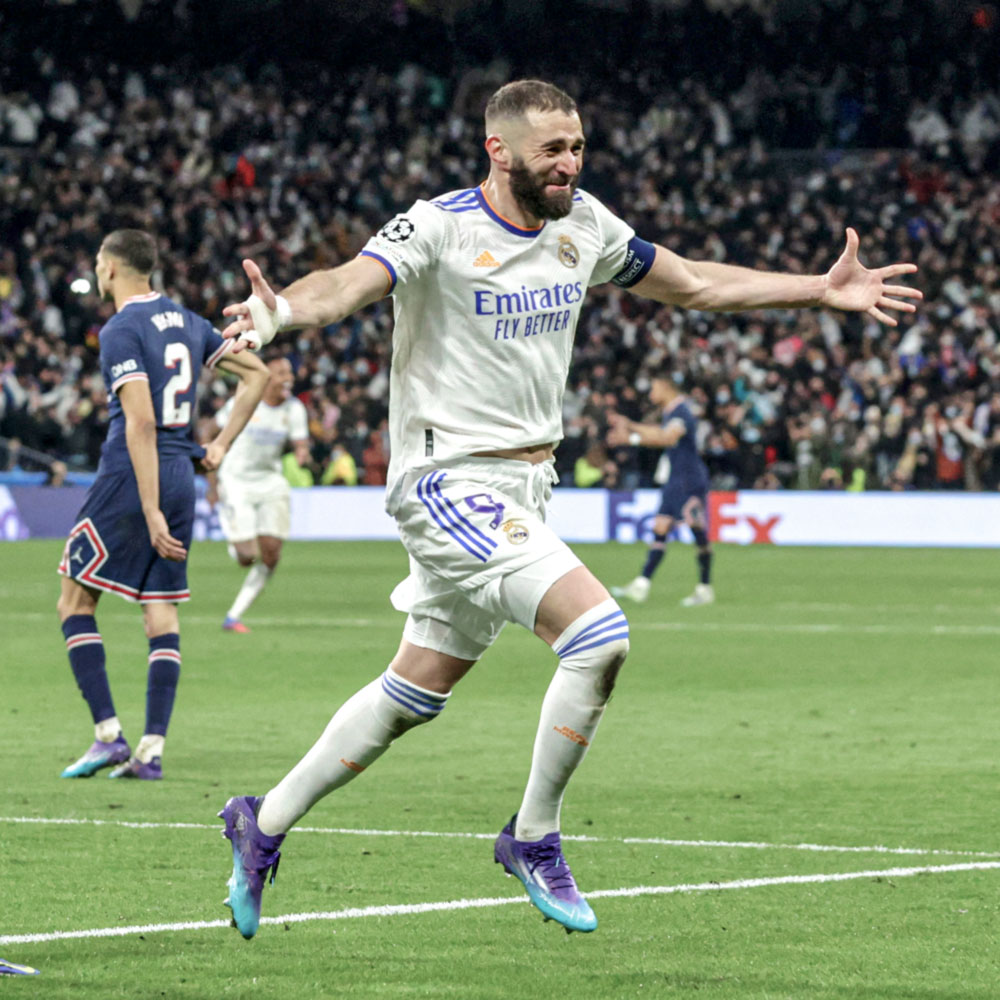 On a dramatic evening at the Santiago Bernabéu, Real Madrid produced a thrilling second-half comeback to dump a shellshocked Paris Saint-Germain out of the Champions League and progress to the quarter finals. Mauricio Pochettino's team arrived with a 1-0 advantage from the first leg of this last-16 tie, and looked to be cruising into the last eight when Kylian Mbappé rifled past Thibaut Courtois for his second goal of the tie late in the first half.

Carlo Ancelotti made a double substitution just before the hour, however, with Rodrygo and Eduardo Camavinga replacing Marco Asensio and Toni Kroos – and then Karim Benzema took over. The French forward equalised on the night, capitalising on a horror mistake by Gianluigi Donnarumma; he then scored a second after fine work from the seemingly ageless Luka Modric, before capitalising on yet more horrific PSG defending to complete the hat-trick little more than 10 seconds after the visitors had kicked off. Benzema now has 79 Champions League goals – only Cristiano Ronaldo, Lionel Messi and Robert Lewandowski have more.

"I think all Madridistas are happy, and that’s the most important thing," said Ancelotti after the game. "It was tough to win the ball back in the first half, but one good press from Karim gave us the first goal and then the magic of this stadium happened. The fans gave us energy and killed the opponent. There was only one team on the pitch for the final 30 minutes. I’ve had many nights in this competition, but there’s not many nights like this one.”

Pochettino was left to rue a stunning capitulation from his team – not their first in the Champions League: "The first goal completely changed the game. For an hour, we were better than Real Madrid. The atmosphere changed in the stadium. We made some mistakes after that, we can't say we didn't. The worst feeling is that we were the better side, but we lost the tie in 10 minutes. I'm really disappointed, upset – but these things can happen. The next few weeks are not going to be easy."

Early focus on the left

Carlo Ancelotti set Real Madrid up in a 4-3-3 formation against Paris Saint-Germain’s 4-3-3 defensive block. In the early stages, they proved more effective on their left side, where wide attacker Vinícius Junior maintained the width. Number eights Fede Valverde and Luka Modric supported through the inside channels (below), while Toni Kroos looked to drop into the back line as the single pivot. Nacho rarely pushed forward from left-back, instead supporting behind the ball, but Dani Carvajal did look to get forward and overlap from right-back. This allowed Marco Asensio to narrow off and get closer to central striker Karim Benzema, who also looked to drift left and help Real overload PSG’s midfield three.

PSG maintained their 4-3-3 shape out of possession, which made it difficult for their second line to cover the width of the pitch – particularly when the front three held such a high position, ready to counter-attack. As a result, the home side looked to build around PSG, using their full-backs to stretch the visitors’ midfield. Modric dropped to support Kroos in midfield, with Valverde and Asensio operating in the inside channels and looking to connect with Benzema (below). Vinícius remained high and wide on the left, with Carvajal looking to provide width on the right when he could. This did leave more space for Kylian Mbappé to exploit during first-half counter-attacks, as he showed to devastating effect when opening the scoring.

In the second half, Real used their full-backs and wingers in wide combinations to further improve their play around the PSG midfield. Both full-backs made more consistent overlapping runs around their wingers, who played narrower to provide Benzema with more support – as is clear from Vinícius and substitute Rodrygo (below). Modric pushed further forward from midfield, often acting as a number 10 to support either side of Benzema – the pair became increasingly influential, with their second goal on the night perfectly demonstrating the new attacking structure. Valverde and the impressive substitute Eduardo Camavinga provided the cover behind, screening access into the PSG front three where possible.

Aggression with and without the ball

One key feature of the second-half turnaround was Real’s pressing intensity, and ability to dominate the inside channels as they broke forward. Both number eights supported with forward runs after a regain, with Camavinga covering in behind (below). Rodrygo and Vinícius both looked to drive inside from their flanks and combine, with further support on the outside coming from one of the back line. This gave Benzema much more support than he had enjoyed in the first half, as the home side’s aggression – both in their pressing and their attacking when they won the ball – contributed to a huge shift in momentum in the second half. This, together with Benzema’s ruthlessness in front of goal, is ultimately what won Real the game and tie.

Mauricio Pochettino set PSG up in a 4-3-3 formation, against a Real Madrid team that defended using a 4-1-4-1 block. Kylian Mbappé started on the left of the front three and held his width, always looking to exploit the space behind Dani Carvajal during transitional moments – the source of their goal – and attack the right-back 1v1 when Real were set in their block. Neymar began central, with Lionel Messi narrowing from his starting position on the right, and dropping to combine through central midfield (below). This gave Achraf Hakimi plenty of space to overlap from right-back, with Danilo dropping from midfield to cover these advances and give Messi even more space in central areas. Marco Verratti and Leandro Paredes operated as a fluid midfield pairing, connecting the back line into the front three.

As the first half progressed, both full-backs managed to work into high overlapping positions, with Mbappé now attacking more centrally (below). Neymar started to drop from his central starting position, to connect with Verratti in the inside channels. Paredes dropped into the back line to create more room for these dropping movements into central midfield; this also helped widen the PSG centre-backs, who could then support and cover closer to their advanced full-backs. Danilo continued to drop out of central midfield during the visitors’ build-up, which helped cover Madrid’s main counter-attacking threat in Vinícius.

Struggling against the Madrid press

PSG struggled to build from the back in the second half, as Madrid pressed higher and with more intensity. The hosts pushed one of their wide attackers forward to support Benzema in pressing the PSG centre-backs. In midfield, Real’s more reserved winger helped the number eights deal with PSG’s midfield trio, with Camavinga covering between Messi and Neymar (below), with the support of his centre-backs. The narrower press forced PSG wide, from where they struggled to work play back inside – and any attempts to play more direct balls over the press came to nothing. PSG’s failure to cope with the more aggressive Real press led to two of the hosts’ three goals on the night, with the third coming only 10 seconds after PSG kicked off at 2-1 down.

In response to Madrid’s increased pressing, PSG focused on a stronger influence around the home side’s centre-backs. Neymar and Mbappé played as a higher pairing for longer, with Messi operating as the central 10 to link the midfield with the front line (below). Mbappé, whose pace and direct threat on goal was PSG’s best attacking outlet all night, found himself running beyond in the central areas more often. He had two goals disallowed for offside, however, as the visitors failed to exploit Madrid’s defensive frailties. With both PSG full-backs high and wide, Madrid’s central-midfield unit would drop slightly and withdraw their press on occasion. Paredes and Verratti thus controlled moments of the second half through possession, with Danilo still dropping to cover Vinícius. However, despite this, PSG’s inability to maintain concentration, control and quality cost them the tie.