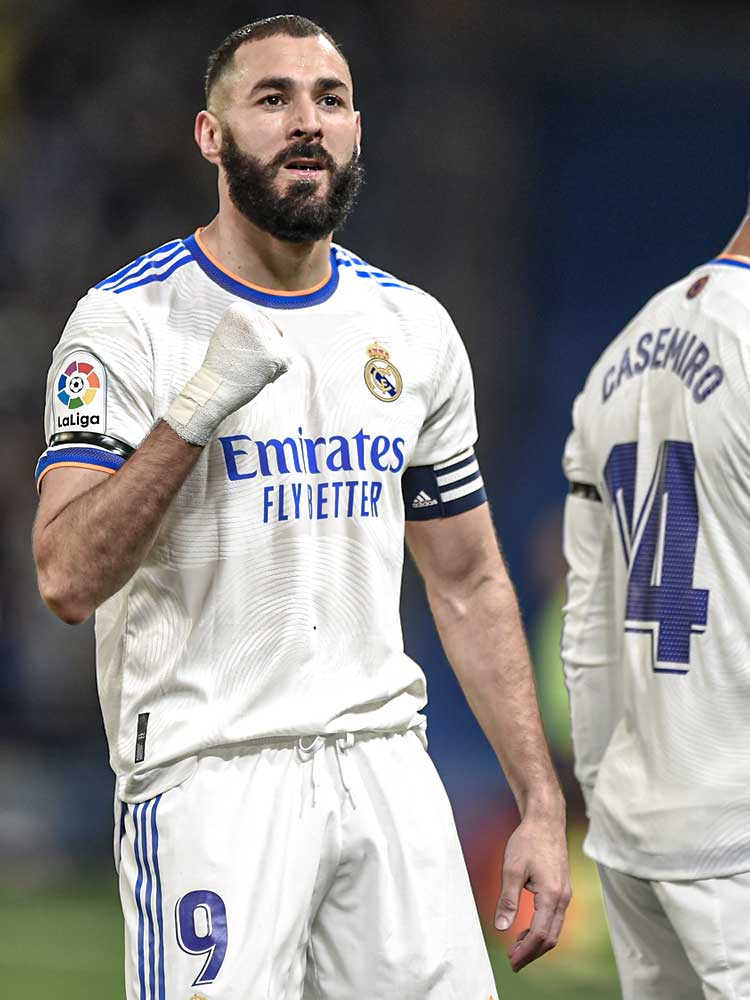 Real Madrid recorded a 10th successive victory, this time over rivals and defending champions Atlético Madrid, to move eight points clear at the top of La Liga. A goal in the first half from Karim Benzema, followed by another in the second from Marco Asensio, proved enough to secure a win that also leaves them 13 points ahead of Diego Simeone's team.

"I really like the team from a defensive point of view," said Real's manager Carlo Ancelotti. "It's the area where we've improved the most since the start of the season. We're more solid. Our pressing isn't too high up. We like it that way; with a lower block, you have the chance to use the forwards on the counter." Simeone said: "Until the first goal it was an even game, without chances, but the forcefulness of Madrid decided the game."

Prioritising width...
Real Madrid, attacking with a 4-3-3, were confronted by Atlético Madrid's 4-4-2 defensive block. They sought to create overloads around the ball (below) and execute quick, one-touch passes to draw their opponents out of position and then play around them. They needed to play with significant width to do so, and this was offered by both their full-backs and wide forwards. As a result, Atlético had to sacrifice their desired compactness to counter the threat out wide and protect against quick switches of play.

... and overloads
Atlético's narrow and compact shape encouraged Toni Kroos to drift wider (below), where he operated as a false full-back in an attempt to draw his opposing wide midfielder and create a two-on-one for left-back Ferland Mendy and winger Vinícius Júnior against Atlético right-back Marcos Llorente. When Atlético recognised that, a central midfielder instead moved to engage Kroos, leaving Ángel Correa free to retain his position and support Llorente in a two-on-two. Given this wasn't always possible, Real continued to create their desired overloads.

Conquering Atlético's press...
Real found it straightforward to play out against their opponents' press, owing to the overloads they created in the first and second phases. Thibaut Courtois, Eder Militão and David Alaba created regular 3v2 overloads against Atlético's front two (below), with Casemiro positioned between them to offer Courtois another passing option. The Real full-backs and midfield three created a 5v4 across the pitch against Atlético's midfielders. With the visitors' back four also occupied by Real's front three, their press was regularly overcome.

... and drawing them forwards
Real posed their greatest attacking threat when they drew their opponents forward, which led to both of their goals. The first, from Karim Benzema, came after a moment of transition; the second (below) after they played through a high press. The speed with which Real played the ball and made off-the-ball runs – particularly in wide areas – helped that. It proved considerably more difficult for the hosts to stretch their visitors when they were already in an organised, deep, defensive block.

Attacking with numbers...
Atlético Madrid's out-of-possession 4-4-2 evolved into a 4-2-4 when they had the ball, with wide midfielders Yannick Carrasco and Ángel Correa advancing to join front two Antoine Griezmann and Matheus Cunha (below). They lacked the rotations and movements required to stretch Real Madrid's defensive structure, however, which meant too many straight passes being played into feet or space. Real centre-backs Éder Militão and David Alaba were comfortable when asked to defend the channels, where balls were too often played.

... while working to avoid counters
Atlético sought to create an in-possession shape with which they could pose an increased attacking threat without sacrificing the protection they wanted against potential counters. They proved more potent on the right, where Marcos Llorente's speed and attacking instincts often took him from right-back into their attacking line. Koke and Rodrigo de Paul remained compact in central midfield, while left-back Mario Hermoso tucked infield, ultimately creating what often became an in-possession 3-2-5. Atlético had recognised that Real's wide attackers would be drawn into pressing their central defenders, which led to the creation of two-on-ones between Atlético's full-backs and wide midfielders against Real's full-backs. Even if a central midfielder moved to assist the overloaded full-back (below), Real's width in midfield was reduced, presenting Atlético with opportunities to switch play.

Atlético's evolving attacking shape
At half-time, Diego Simeone introduced Thomas Lemar and João Félix for Carrasco and Griezmann. This created more staggered positions between their attacking players, which tested Real. The visitors continued to attack with width and tried to switch play – not least because of Real's success in defending central areas – but there were too many occasions where a lack of detail in their passes undermined them. They progressed into more promising positions in the attacking half before a lack of weight or direction meant that their final pass too often slowed down their attacks, or even led to turnovers and counters.