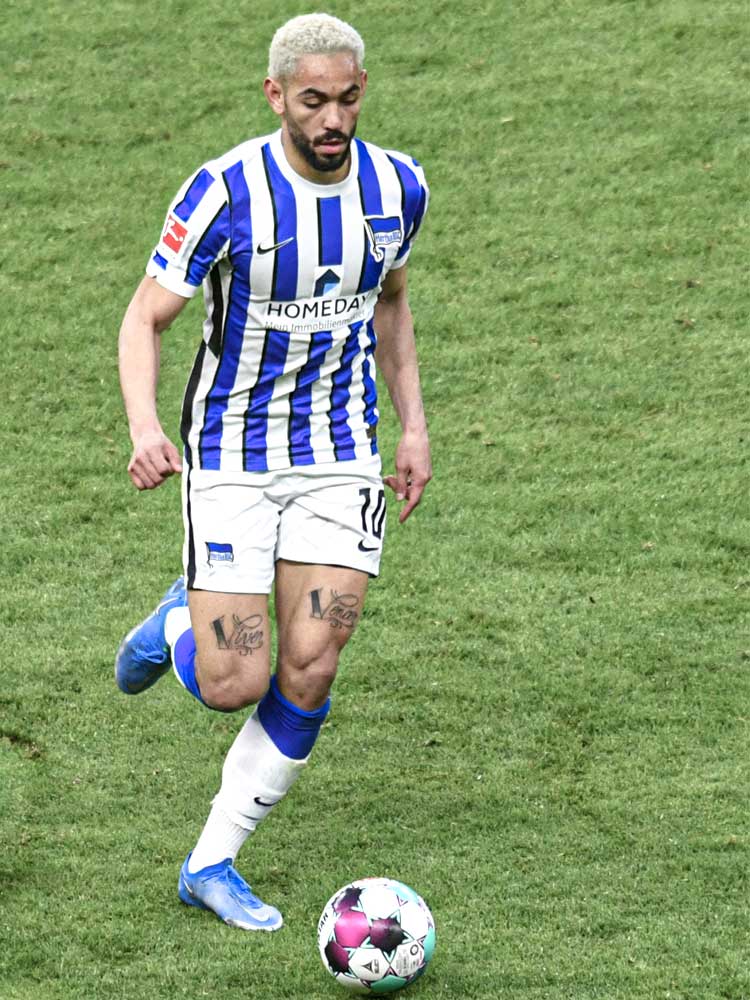 Profile
There is little question that Matheus Cunha was the poster boy of Brazil's success in taking Olympic gold, for the second time, at Tokyo 2020. With five goals, his teammate Richarlison was the competition's leading goalscorer, but the three goals and one assist recorded by Cunha made him the player who most caught the eye.

Cunha, typically, was already being monitored by several of Europe's leading teams before, at the age of 22 in August 2021, becoming an Olympic medallist and then joining Atlético Madrid. An admirer of Ronaldinho, Cunha's former manager at Hertha Berlin, Pál Dárdai, has even previously described him as a "genius".

Tactical analysis
Cunha is a versatile, right-footed forward who is proven both through the centre and when starting wide, but it is from the centre of the pitch, against imposing central defenders and from where he can dribble and receive between the lines, that he is at his most effective. He often times his first touch so effectively that that touch helps him to evade opponents, and he then accelerates as he controls the ball and continues his attack. That same sense of timing also exists in the runs he makes in the moments before receiving possession – particularly when moving from a wide position to between the lines – and is complemented by the direction in which he takes his first touch, which is so often determined by where he can advance into space.

If confronted with increased defensive pressure, Cunha responds by using his physical strength to dribble through the relevant defensive block; because he can so easily resist one opponent, further defenders are drawn towards him and the ball (below), in turn creating chances for him to shoot at goal or to play teammates in behind. He demonstrates admirable decision-making when he reaches the final third, where he recognises how and when to combine with teammates or to retain possession, and potentially when to tempt opponents out of position and therefore create space for others.

That he can so effectively strike the ball with power, particularly with the inside of his foot, and has the vision to see teammates on the far side of the pitch makes him capable of switching play. His shooting technique, similarly, means he is also a threat from range, from where he is capable of finding the corners of the net, and from set-pieces, when he can just as accurately whip powerful deliveries into the penalty area.

It is when he is finishing from closer to goal that he shoots as early as possible; he can regularly be seen opening his body to finish with his right foot (below), and successfully adjusting if the pass played into him isn't played with the weight and accuracy he desired. His reasonable return of both goals and assists – neither total is spectacular – is regardless a reflection of the fact that Cunha is a well-rounded forward.

With his back to pressure, particularly from between the lines, and the ability to roll opponents and turn in both directions before advancing, Cunha almost exclusively favours his right foot. For all of his ability to turn in both directions, there are times when pressure forces him on to his left foot and he therefore struggles to progress possession. It is instead easier for him to rely on his upper-body strength to hold and shield the ball (below) – a particularly useful trait from a withdrawn position or when in his defensive half, particularly in the moments after a regain when he can help to secure the ball and contribute to building attacks.

From more advanced territory that same upper-body strength means he succeeds in occupying defenders before releasing the ball to those making forward runs, potentially to around or ahead of his position. When holding off full-backs and seeking to move infield he is also effective. If he can improve his ability to link with those in deeper territory he can prove even more valuable.

Role at Hertha Berlin
Cunha was mostly used towards the left of what was most commonly Hertha's 4-2-3-1 (below) and 4-3-3, but there were also occasions when he featured as their number 10. Regardless of his starting position – RB Leipzig often previously used him as a striker – he prioritised attacking through both the centre of the pitch and the inside left channel.

He ranked third highest for attempted dribbles and one-on-one attacks in the Bundesliga during 2020/21, largely owing to his ability to receive possession with pressure coming from behind him and then to explosively turn and advance. Dodi Lukébakio, who regularly made runs from wide on the right, provided effective support when he did so.

Cunha's desire to move further infield in the moments before receiving passes contributed to Vladimír Darida rotating with him towards the left, and either or both of Jhon Córdoba and Krzysztof Piatek maintaining advanced positions ahead of him, from where they sought to contribute in the next phase of their attacks. A central midfielder regularly advanced to alongside Cunha, who then demonstrated his intelligence by adjusting his position at a time when he knew they had reduced defensive cover and were often building with only one defensive midfielder.

If Hertha's movements meant him receiving possession wide on the left, he sought to cut infield on to his right foot instead of playing the ball and then moving across the pitch, often relying on his change of pace as he received and then seeking to play cut-backs and through balls, and to offer a wider threat on goal. There were also occasions when they built with a back three (below), and when Cunha therefore featured permanently from the centre as a 10 and – through being in a position to receive with greater potential to attack instead of being required to move infield from a defensive position – provided an increased number of dribbles on the counter. The frequency of him doing so increased when they were defending with mid or lower blocks.

Cunha also featured as their 10 behind a front two, when he represented the chief link from midfield to attack and had increased freedom to attack from towards the right and to run beyond that front two when one had withdrawn into deeper territory or flicked possession on. When that was the case, Hertha's wing-backs provided their attacking width, giving Cunha's ability to switch play increased potential, and in a system that regularly gave him greater space between the lines to receive, drive forwards, and release his teammates.

From behind a single striker and as one of two 10s, Cunha instinctively again prioritised the spaces through the inside left channel, and moved similarly to when Hertha were building possession via their 4-2-3-1. With their attacking width again coming from their wing-backs, he cut infield at an earlier stage of their attacks, or started from a more central position.