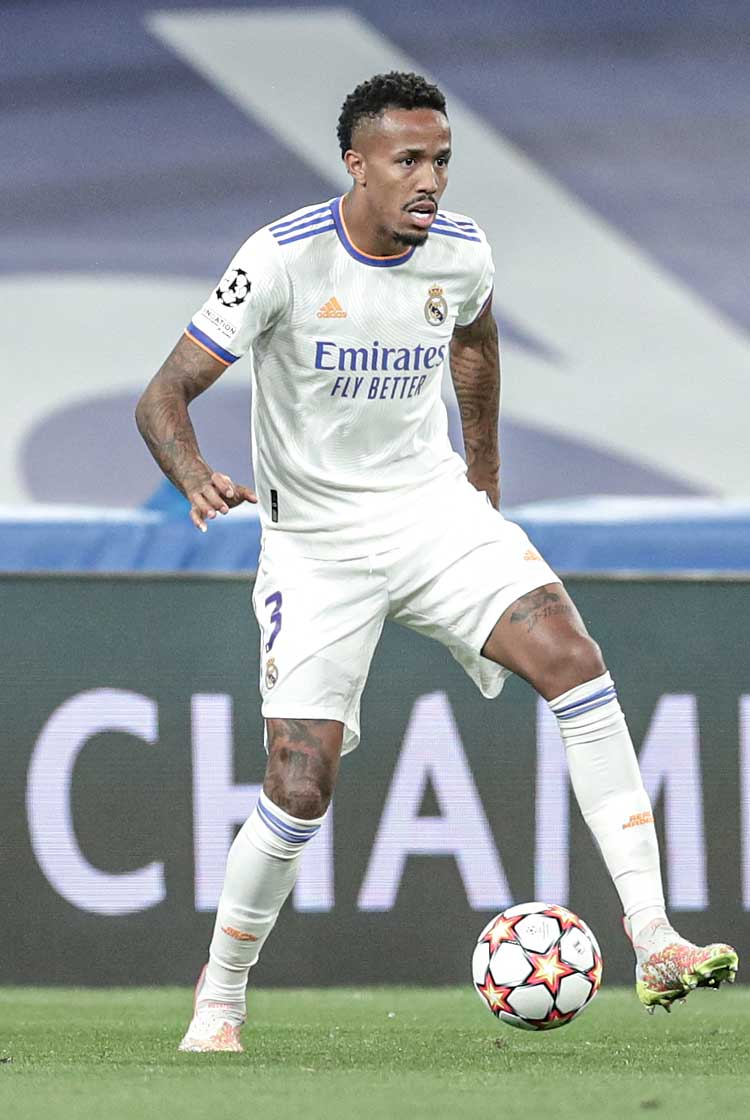 Profile
Since a first-team debut at boyhood club São Paulo at the age of 19, Éder Militão has enjoyed a rapid rise. He took just one season to establish himself at the heart of São Paulo’s defence, and only a few months later Porto won the race to sign the young Brazilian, reportedly beating off competition from a host of other European clubs. A month after joining Porto, he received his first international call-up, and after completing just one season in Portugal’s Primeira Liga – which included a run to the 2018/19 Champions League quarter finals – Real Madrid came calling.

Militão became the first signing of Zinedine Zidane’s second spell at the Bernabéu, but it was after the Frenchman’s departure in May 2021 that Militão’s status and importance at the club grew most. In the same summer that Zidane left, Real’s two most senior centre-backs, Sergio Ramos and Raphaël Varane, departed for Paris Saint-Germain and Manchester United, respectively, and in doing so, left a gaping hole in defence. Carlo Ancelotti came in as manager, and it was time for Militão to step up as a first-choice pick at the heart of the Real back line. In keeping with the rest of his career, Militão quickly became one of the first names on Ancelotti’s teamsheet.

Tactical analysis
Militão is at his best and most comfortable when playing in central defence, but he is versatile and can also play at right-back, as he did when he first broke through at São Paulo and for a period at Porto. The fact he can be moved around defence meant that at both clubs he could develop relationships with teammates from right-back before being shifted to centre-back at a young age.

Standing at 186cm, he isn’t particularly tall for a central defender, but he makes up for any lack of height with an impressive leap and the strength to hold off an opponent. He is adept at proactively attacking the ball himself but is comfortable playing the role of the centre-back that sweeps up, and often benefits from playing alongside a central defensive partner who is more dominant than him in the air.

Where possible, he likes to defend on the front foot and will follow opposition forwards as they retreat towards their own goal to receive the ball to feet. Militão excels in these situations and uses his body to put his opponent off balance with a shoulder-to-shoulder nudge at the opportune moment (above). He times this contact intelligently to catch his opponent when they are slightly off balance.

If his opponent gets their body fully between him and the ball, Militão knows he can’t use his shoulder to push them off the ball or he will concede a free-kick. When this happens, he gets tight to his opponent and will try to poke the ball away from them by stretching around them. He can, however, sometimes overcommit when following a forward away from goal, and if his opponent moves the ball to one side with their first touch rather than trying to control the ball and hold Militão off, the centre-back can be caught out of position, particularly if the forward manages to flick the ball around the corner to a teammate.

Militão is very agile and is relatively quick, though, so he can make quick recovery runs when he is the wrong side of the ball, and he is rarely exposed by fast, mobile attackers. He is fast enough to get back into position quickly, and he also shows good technique and turn of pace when facing up a defender who is running towards him. He is intelligent when isolated, showing his opponent to one side, inviting them to take him on down that side, before engaging with them when they attempt to beat him (above). He times the decision to cut across his opponent impressively well.

He sometimes struggles a little when an inside forward gets into space in front of him and looks to cut inside on to their stronger foot. As he tends to play on the right side of central defence, this often means the opponent will be attacking his left foot, on the inside of the pitch. His preference to use his right foot to tackle can be so strong that he attempts to tackle with an awkward body shape in these situations (below). This is one area he could do with improving.

Earlier in his career, Militão demonstrated an impressive ability at attacking set-pieces. Although he has not scored many goals in Real Madrid white, he scored a few for Porto and São Paulo, and he poses a threat when going up for corners and attacking free-kicks. He generates real power with his headers, and has scored some eye-catching goals as a result.

Role at Real Madrid
Militão plays on the right side of central defence for Real Madrid, and is often the deepest man back, either as a result of his starting position or the fact that he will almost always be ready to sweep across behind either full-back or his centre-back partner. He is alert to defensive transitions and plays a key role for Real in that he reacts quickly to a loss of possession. Given his side will often dominate possession, they leave space behind them that makes them vulnerable to counter-attacks, and Militão’s reactions and recovery speed are helpful after they lose the ball.

He is comfortable in possession, and his past as a right-back means he will happily bring the ball out of defence when the opportunity arises. When Real build, however, central midfielders move to either side of the centre-backs, and it is usually Luka Modric who appears to Militão’s right during the build-up phase. When the ball comes his way and Modric drops into a false full-back position next to Militão, the ball will quickly be moved on to the Croatian midfielder.

If no midfielder drops towards him to receive a short pass or if the opposition push up to cut off Real’s route to Modric, Militão can step into midfield with the ball and distribute play forwards. He prefers to play the simple pass to find one of his more attack-minded teammates as efficiently as possible, but when he spots someone free on the left flank, he will gladly attempt a long, diagonal pass out to the left (above).

Militão is still some way off being the complete defender, but as has been the case throughout his professional career, he is improving all the time. A continued run at centre-back at a club like Real Madrid should only see him get better. He could well have a bright future at the top of the game.