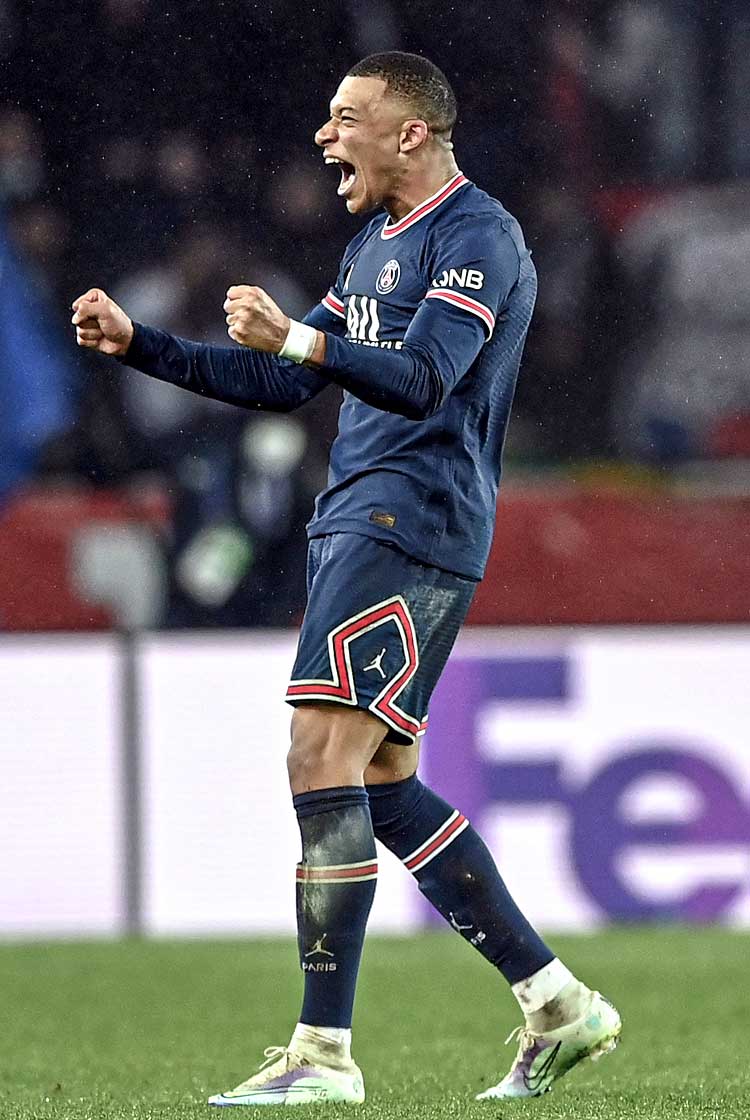 Kylian Mbappé struck with virtually the last kick of the game at the Parc des Princes to break a resilient Real Madrid down and secure a crucial first-leg advantage in this Champions League round-of-16 tie. Mauricio Pochettino's hosts were far the better – and more adventurous – team on the night, but struggled to find a way past Thibaut Courtois in the Real goal. With the away goals rule no longer in use, Carlo Ancelotti set his Real team up to play for an away clean sheet, and they nearly succeeded. It looked like it might be their night when Courtois saved a Lionel Messi penalty following Dani Carvajal's clumsy challenge on Mbappé. However, Mbappé sauntered through the Real defence late on and slotted through Courtois' legs to send the home team into raptures.

"I’m very happy for the players, who deserve it," Pochettino said afterwards. "I think the result [could be better], but it gives us hope for Madrid."

"We did quite well in defence, even though we sat too deep and weren't aggressive enough," said Ancelotti. "Usually, it doesn’t disturb us too much when the opposition presses, but today we struggled. PSG deserved to win."

PSG were set up in a 4-3-3 attacking shape, and came up against Real Madrid in a 4-5-1 block. Wide forwards Kylian Mbappé and Ángel Di María moved inside, allowing both full-backs to overlap. Danilo Pereira dropped in to form a double pivot with Leandro Paredes, while Marco Verratti moved into a more advanced position in the left inside channel. Lionel Messi dropped into midfield to receive (below), helping to overload the visitors’ central midfield three; he and Verratti proved the key links to the front line.

The home side spent considerable periods trying to find a way through Real’s compact low block. Real’s wingers dropped very deep to track PSG’s high full-backs, Achraf Hakimi and Nuno Mendes, which allowed the visitors to keep their back four intact. Di María and Mbappé then looked to get on the ball on the outside of Madrid’s central midfield three (below), where Real’s full-backs were reluctant to follow them. Mbappé had a lot of joy getting on the ball in space, particularly in the first half. Messi stayed higher when Mbappé got on the ball; the two then looked to combine to break Real down.

Mbappé took up a wider position in the second half. Although this limited the space for Mendes to overlap into, it did help PSG’s biggest threat isolate Dani Carvajal. His pace and dribbling was too much for the Real right-back, who committed a foul to concede the penalty that Messi then missed. Verratti supported through the inside channel, and provided the link between the defence and Mbappé out wide (below). Paredes then acted as a single pivot, with Danilo dropping into the back line to deal with Vinícius Júnior’s threat on transition. On the right, meanwhile, Hakimi was afforded space by Di María moving into narrow positions. He was often PSG’s highest attacker, with Messi dropping into central midfield.

Neymar was introduced into the front line for the final 20 minutes. He, Mbappé and Messi all remained central while the full-backs provided the team’s attacking width (below). Messi and Neymar linked up particularly well, and PSG consistently broke through Real’s central midfield three in the late stages. Quick combinations then threatened the visitors’ back line, with Mbappé as the highest central attacker looking to threaten the space in behind and around the sides of the centre-backs. The pressure proved too much for Real, and a superb piece of individual skill from Mbappé on the left led to the goal that secured a narrow victory.

In their attempts to establish spells of possession, Real Madrid’s 4-3-3 structure sometimes converted into a 4-2-2-2. Up against PSG’s 4-3-3 defensive block, this was an attempt to overload the central areas with a box midfield. Toni Kroos dropped alongside Casemiro, and Luka Modric moved forward to join a withdrawn Karim Benzema (below). The full-backs provided the team’s width, but Marco Asensio and Vinícius Júnior also held high and wide positions. Their height was designed to allow their full-back partner to drive out whenever they could, but Real struggled to beat PSG’s press and the full-backs could not get out.

With the visitors defending in a low block for long periods, they were very reliant on counter-attacks. On the left, Vinícius cheated with his position, hoping to run in behind anytime the back line or central midfield regained possession. However, his position provided more room for Hakimi to attack into and he rarely received the ball on transition. On the right, Asensio dropped back to help Carvajal against Mbappé, so he provided little counter-attacking threat. Instead, following a midfield regain, Asensio moved narrow (below) to provide an extra passing option as PSG pressed aggressively. Benzema also dropped to disrupt the two PSG centre-backs, and Vinícius ran in behind. Danilo covered behind Hakimi, and did a good job of nullifying Vinícius’ threat.

PSG’s high press proved very effective throughout the game. Their wide forwards pushed infield to press the Real centre-backs and then the goalkeeper. As Real attempted to overload the hosts’ midfield with a four-man box, Messi dropped back to maintain numerical parity. However, with Danilo having moved over to cover Vinícius’ threat on Real’s left, PSG had to adapt the positioning of their centre-backs. One moved out to the left side to cover Asensio, with the other pushing up to follow Benzema. The full-backs then occupied the Real full-backs. Real struggled badly all night to play through, around or over PSG’s well-organised and adaptable press.