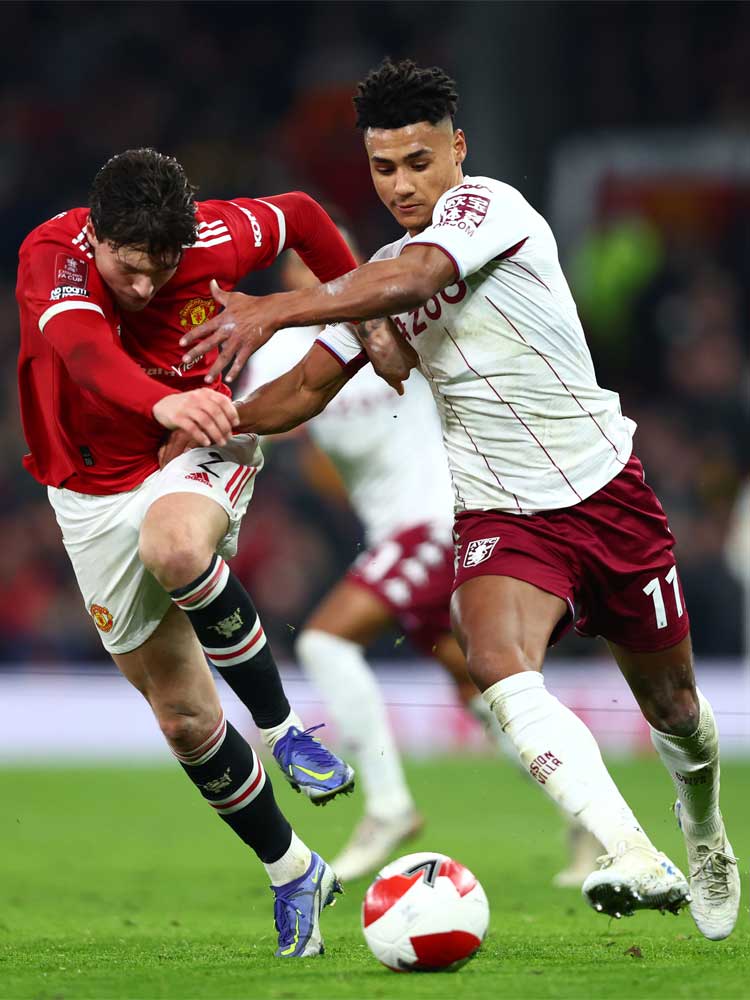 Manchester United progressed to the fourth round of the FA Cup and gave their so far disappointing season a lift with victory over Aston Villa. Scott McTominay's eighth-minute header ultimately proved enough to take them through to the next stage, where they will meet Middlesbrough, but their victory relied on disallowed second-half efforts from Ollie Watkins and Danny Ings. United's interim manager Ralf Rangnick said: "It could have been 3-2 or 4-3 to us at half-time. In the second half, we were on the counter-attack and we could have made more of those situations. We took the wrong decisions at times, but when we changed in midfield we had more control. In the last 20 minutes, we had more control. We fought well as a team together when it was important."

Villa manager Steven Gerrard, whose team host United in the Premier League on Saturday, said: "The lads gave a lot in terms of performance, but we need to learn and close the gap from a performance that was nearly good enough. We dominated for large parts but we were not ruthless enough."

Bypassing Aston Villa's central midfield
Manchester United were organised by Ralf Rangnick into an in-possession 4-4-2 shape. Width was provided by wide forwards Mason Greenwood and Marcus Rashford, who were supported infield by full-backs Diogo Dalot and Luke Shaw. Bruno Fernandes regularly adopted an advanced central position alongside Edinson Cavani. Double pivot Fred and Scott McTominay looked to play into wide areas (below), either over or around the narrow Aston Villa central midfield. Rashford's particularly wide position gave them significant potential on the left.

Variety in the attacking third
As the first half progressed, Fernandes increasingly drifted to the left to support Rashford and Shaw, who continued to make underlapping runs (below). Fred and McTominay covered potential Villa counters into Ollie Watkins and Danny Ings in central areas, while Dalot remained narrow on the right to offer similar runs to Shaw. Greenwood moved infield from his starting position on the right, to take up the position that Fernandes was vacating alongside Cavani. United committed more numbers to their attacks on the left than on the right, however.

Extra reliance on counter-attacks
During a scrappy second half, United were increasingly reliant on regains in the midfield third and subsequent counter-attacks. The introduction of Donny van de Beek for Cavani saw them reorganised into a 4-3-3 shape (below) that strengthened their defensive security. Fernandes – now their out-of-possession central attacker – withdrew and roamed with freedom when they attacked. During moments of attacking transition, Rashford and Greenwood moved infield to make runs beyond Fernandes and in behind the Villa full-backs, who inhabited advanced attacking positions in the second half.

Different movements from Fernandes
While Rashford remained wide on the left, Fernandes now withdrew deeper and to the right. This presented Greenwood with space to make runs across the Villa defence and become United's most advanced attacker, while Van de Beek advanced to offer support from central midfield (below). The Dutchman provided a link from midfield into United's attacking line, with Fred and McTominay still providing balance and protection against potential counters.

The diamond midfield
From their starting 4-3-3 shape, Aston Villa often adopted a diamond midfield against Manchester United's out-of-possession 4-4-2. Emi Buendía regularly withdrew from the front three, leaving Danny Ings and Ollie Watkins to take up narrow positions in a front two, while full-backs Matty Cash – who was particularly effective and combined with Watkins – and Matt Targett advanced to provide the width. Buendía relished the increased space between the lines, which was created when John McGinn and Jacob Ramsey succeeded in drawing Fred and Scott McTominay forward.

Right-sided threat
Throughout the first half, the visitors posed their greater threat when attacking on the right. Cash had the freedom to advance particularly high because of McGinn's willingness to drop from midfield and provide cover behind him, which also created an overload that helped Villa overcome the press from United's front two. One of the front three dropped to preserve numbers in midfield; when Watkins did so (below), Buendía would push higher alongside Ings. The Argentinian carried the ball effectively, and created goalscoring chances for both Watkins and Ings.

Increasing control from midfield
In the second half, and chasing the game, Villa played with greater aggression from their 4-3-3, and therefore exerted more control. The midfield's ability to win second balls and force United into a defensive block was influential; Douglas Luiz, McGinn and Ramsey worked hard to secure possession during moments of transition, before releasing it to those making runs through the inside channels. Both McGinn and Ramsey drifted wide to provide links into the overlapping Cash and Targett. They also combined with Watkins and Ings as the forwards made runs through the inside channels (below), and Buendía as he linked into both.

Central combinations
With both full-backs advancing even further, Villa's attacking players mostly focused on central areas (below), where their quick and incisive passing combinations helped them to progress beyond McTominay and Fred. The front three alternated between which of them dropped into midfield or ran in behind, making it difficult for their opponents to mark them. Buendía and Watkins in particular looked to support Ramsey and McGinn before releasing Cash and Targett out wide, or Ings in behind. Once United adapted to using a midfield three in the last 20 minutes, however, Villa's combinations proved less effective – the visitors were thus unable to find an equaliser and fell to a sixth consecutive third-round defeat in the FA Cup.