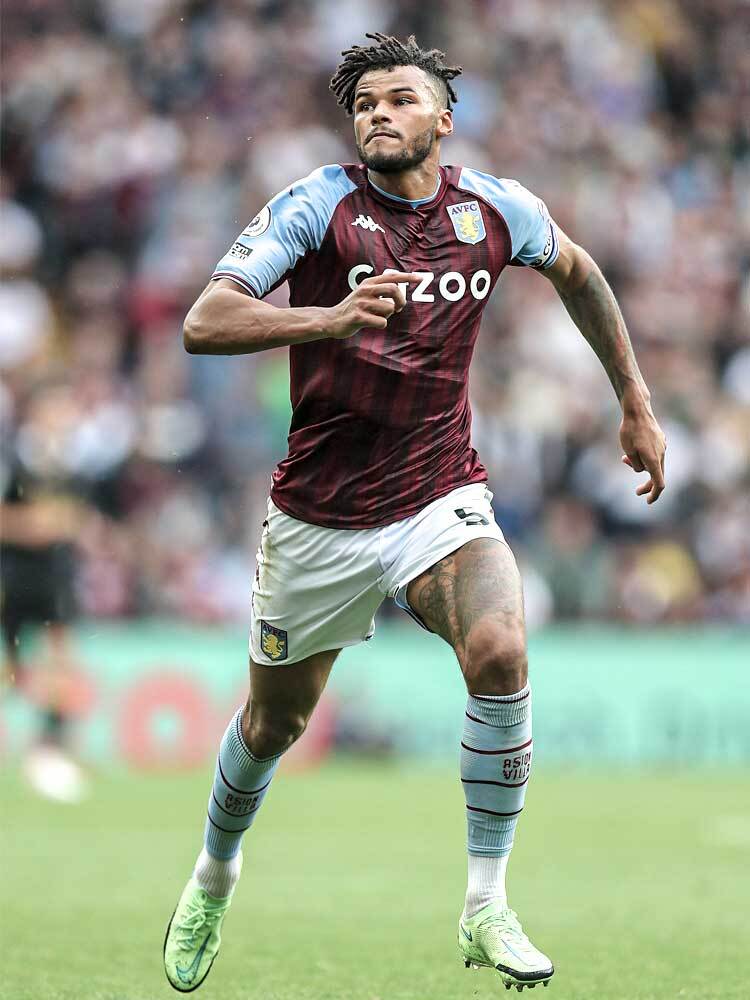 Profile
There have been many key components in Aston Villa’s recent rise. Dean Smith’s work on the training ground; the now-departed Jack Grealish’s brilliance; the partnership between John McGinn and Douglas Luiz in central midfield. However, without the stability Tyrone Mings has brought at the back since his arrival from Bournemouth in 2019, Villa may well not even have made it out of the Championship.

A key man under Smith, Mings is a real presence at the back, providing leadership as well as technical ability and tactical nous. “He has certainly won the hearts of the supporters here [at Villa] his leadership, style of play and attitude,” said Smith. “It is his attitude which stands him above all others.”

Tactical analysis
Although it is far from his greatest strength, Mings has the advantage of being a left-footed centre-back – which is of huge value in the modern game. As he is comfortable on his left, he is adept both at bringing the ball out of defence and distributing play forwards on that side of the pitch, and also at covering the left channel to sweep up any passes played behind his defensive line before clearing with his left foot upfield. When he does moves across in the left channel, he prefers to recover to a goal-side position before curving his run towards the ball. This means that should the attacker reach the ball first, Mings is in place to shepherd his opponent away from goal.

He is effective when blocking shots, using his sizeable frame to form a big barrier between the ball carrier and goal, and he does not turn his back when the shot is executed. He will bend his knee inwards to block shots aimed between his legs, and also stands up tall to block shots that are aimed higher towards goal.

When he has the ball at his feet Mings, will usually prefer to find the feet of a midfielder in close quarters, but he will also happily step out of defence and into midfield with the ball if the opposition have blocked off passes to his midfield teammates. When he plays the ball forwards, he prefers to play clipped passes over opponents, rather than drilling low, riskier passes into a teammate’s feet.

He also tends to make straight passes down the line towards the left channel instead of diagonals, which would also be more risky, thereby reducing the chance of a misplaced pass sparking a counter-attack for the opposition. He is decent enough on the ball, but his distribution is often a little predictable and is a significant part of his game that is worse than the Premier League's top centre-backs. To move up to a bigger Premier League side, he would need to be far more composed in possession. There are times when he is under very little pressure and decides to go long (above).

He is very good in the air, and uses his strength to move opponents away from the ball as it approaches. He does this well when facing crosses, too, and has also improved his game when he cannot get close enough to his opponent to engage them in a physical battle. He used to get too square on to crosses from wide positions, and with his hips facing directly towards the ball, he would sometimes lose track of an attacker, who may sense an opportunity to move in behind him. However, he now takes up a better body position, that gives him a better chance of keeping an eye on both player and ball (below).

Role at Aston Villa
Mings either plays as the left-sided central defender in a back four or on the left of a back three, and the fact he is left-footed adds balance to Villa’s defence, both when in and out of possession. Manager Dean Smith is unlikely to use a three-man defence if Mings is not available.

Mings has built up a good partnership with Ezri Konsa, and the two have strengths that complement one another. Both are happy to attack the ball and compete with an opponent for possession or sweep up behind their partner. Mings is alert to balls that are headed towards his defensive partner, and will anticipate them by starting his move in behind them early to sweep up (below).

Mings has a limited role when Villa are in possession. When he receives the ball, his role is to usually feed a pass to left-back Matt Targett as quickly as possible, or, if that pass is not on, he will either recycle possession or send the ball long it into the attacking third. There, Ollie Watkins and Danny Ings will buzz around, making life as difficult as possible for the opposition defenders and hoping to pick up second balls. John McGinn and other midfielders such as Jacob Ramsey, Morgan Sanson or Emiliano Buendía, will support the attack and hope to get on the ball in a forward-facing position. Villa’s attacking players are very good at winning loose balls and Mings’ long passes forward are not completely aimless. There is thought behind them, but they naturally result in turnovers more often than not.

He provides significant physical presence at set-pieces at both ends of the pitch, but it is at defensive situations that he plays the biggest role. He marshals the defensive line, dictating both the starting position they take up and how far they push out following a clearance. At defensive corners, he often marks a zone rather than a man, tasked with winning balls in the space in front of goal, while the smaller players block the runs of the opposition's attackers.

Mings has improved markedly in recent years through a few tweaks to his game, and he will get even better yet with a few more. He is already high-quality Premier League centre-back, though, and it is no surprise just how important a role he plays at the heart of Villa's defence.