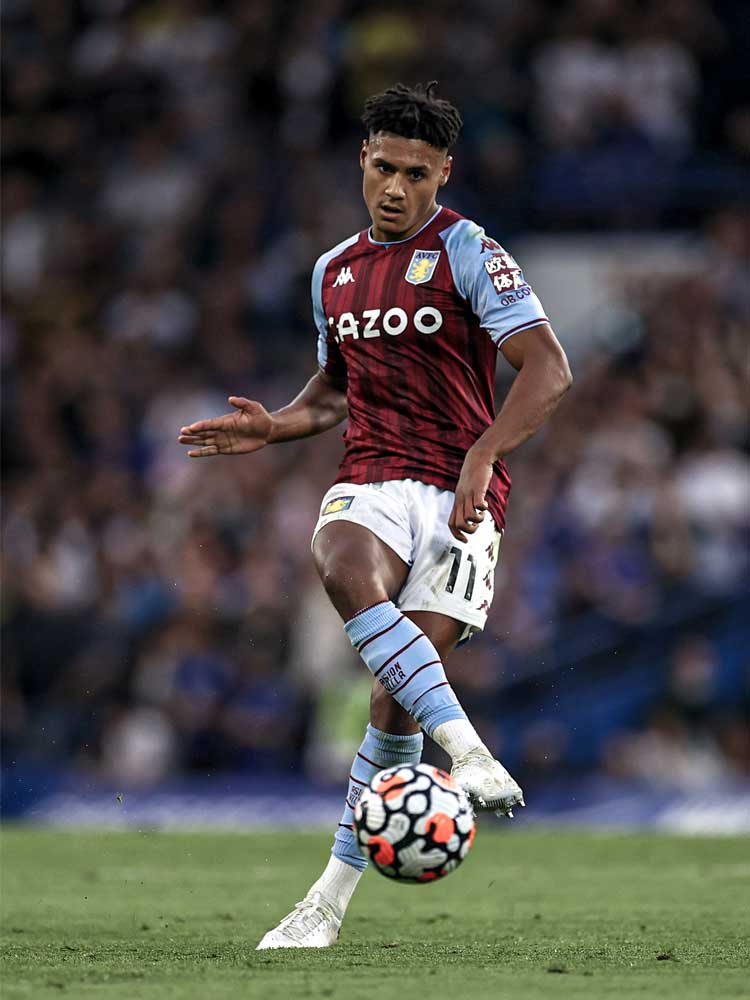 Profile
Ollie Watkins became Aston Villa's record signing when, in September 2020 at the age of 24, he left Brentford for a fee of £28m and a potential further £5m in add-ons. Known to manager Dean Smith from their time together in west London, he has become the regular goalscorer Villa had often lacked as they narrowly avoided relegation in 2019/20, and his form has since led to him representing England.

"I knew what he was and what he was like as a person and how he wanted to grow and get better," Smith said. "His game has got better. I've always said he is one of the best pressing centre-forwards in the Premier League, which is huge praise indeed. He is backing that up with goals. It's what we paid a lot of money for."

Tactical analysis
Watkins is a versatile forward comfortable of withdrawing into a deeper position to link play, of contesting more direct passes, and of remaining in the penalty area to pose a close-range threat. When possession is being built he, regardless, favours moving away from his opposing central defenders and drifting towards the left inside channel (below), from where he relishes attacking – with or without the ball – into the spaces between his opposing full-back and central defender before diagonally driving or, less commonly, passing infield.

For all that it is his preference to attack from the left, there is a consistency to Watkins conceding the ball in equal measure across the width of the pitch. That he is right-footed makes it easier for defenders to force him away from goal when he is towards the right, and therefore less capable of turning infield on to his left.

If the target of more direct play (below), Watkins makes intelligent runs towards the left in an attempt to either pin defenders or run in behind them. Ahead of a more congested midfield third those runs are made into wider territory and followed by him moving back infield at a later stage, having sought to progress around the opposition. The runs he makes also often draw opponents away from the ball; if he can improve to play more penetrative passes, instead of securing the ball and laying it off to teammates to instead build attacks, he can become an even more valuable teammate.

Like so many attacking players, Watkins' focus is to work the ball into a position from which he can shoot; during moments of transition he regularly seeks to take possession into spaces in the centre to do so, and his potential to create shooting opportunities makes him a consistent threat. By moving towards the left, he can then take possession back on to his favoured foot and shoot across goal, when his technique is more fluid, or cut the ball back towards the near post.

That goalscoring threat also exists in the air – owing mostly to his positioning, instead of his movement. Watkins correctly times his jumps, having found space early as the cross travels, freeing him up to concentrate on his jump and timing it to leap over his direct opponent. The movements he offers inside the penalty area are made to reach lower crosses or cut-backs delivered across goal; his explosiveness also makes him effective  at reaching those played towards the front post, which he often does by impressively moving blindside of the first defender.

When he is required to defend he is at his most valuable during moments of transition, when he makes regains in advanced territory (below), and successfully counter-presses. Once the ball has been regained, Watkins quickly progresses play by aggressively dribbling, or penetrative off-the-ball movements.

Role at Aston Villa
Where at Brentford, Watkins was mostly used towards the left of a front three, at Villa he has become their leading, central attacker. They regularly seek to play long passes to him, because of his ability to secure and progress the ball, often before their attacks are continued by their creative midfielders.

Jack Grealish's influence was such that he led so many of their attacks from his nominal starting position on the left, where Watkins' movements enhanced Grealish's potential and gave him increased freedom to run at opponents while Matt Targett overlapped from left-back to provide a further forward passing option. Further movements towards the left from an attacking central midfielder – Ross Barkley combined well with Grealish and Watkins during 2020/21 – often freed Watkins from needing to support, and invited him to instead attack through the centre (below) or to target the near post.

In addition to those into the penalty area (below), there are also occasions when runs are made towards the wide areas of the pitch from Villa's central midfielders, and others when runs are even made beyond Watkins as he withdraws into a deeper position – when his ability to pin defenders buys time for those in midfield to reposition. Unless Bertrand Traoré is favoured there, more direct runs are made from the right.

Should Traoré start from the right, as is increasingly the case, his willingness to drive past opponents and to penetrate forwards with the ball at his feet means he rarely requires a passing option, unless seeking to combine and for possession to be quickly returned to him, and therefore that Watkins often holds his central position (below). It is from those areas that he is so suitable a target for both cut-backs and crosses – whether low or aerial.

That Villa rarely dominate possession means they spend significant periods defending, and that Watkins so regularly leads the first phase of their press. Most commonly doing so from a mid-block, he works in both directions, and has therefore made regains towards both sides of the pitch. His individual press often represents the trigger for Villa's midfield to push forwards, when they aggressively take opponents or cover the closest spaces in an attempt to block forward passes.

Watkins' work ethic, when doing so, is admirable, and proves most effective when he is supported by Villa's two wide forwards. His willingness to press, and ability to decelerate and duel for possession, has also often been rewarded with goals.