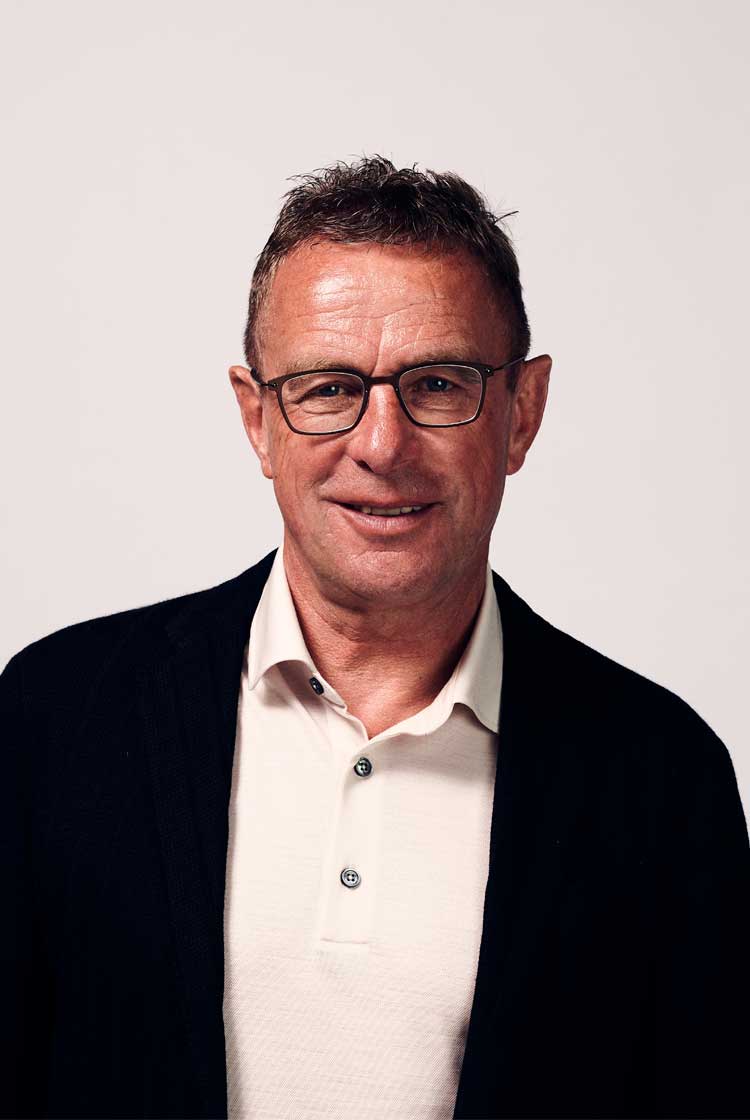 Ralf Rangnick was the keynote speaker at the inaugural Coaches’ Voice Coaching Conference. To watch his full session, watch here on CV Academy

I’d just been sacked after two very successful years with Schalke 04 when I received a phone call at home.

The caller introduced himself as Dietmar Hopp, who was one of the richest people in Germany. At that time, in 2006, it was common, on the radio, for an impersonator to make phone calls and target people. So I waited for a minute, and let him speak.

After a minute it was clear to me that it was indeed Dietmar Hopp, so the conversation started. He asked me if I could imagine taking his team, Hoffenheim, from the German third division to the first division. He was 65, and he said: “Do you think you can take them into the first division by my 70th birthday?”

“Well, I can do it, but it has to go quicker than five years,” I replied. “We have to do it in two or three years.”

That’s how it all started.

Hoffenheim was a third division club. They didn’t have a medical department, or a scouting department. Nothing. They played in front of an average crowd of 1,500 in their home games, but I had a vision of what could happen in the area if and when we took them to the first division.

After three games, we had one point and were second from bottom. You can imagine the reaction; quite a few people laughed and said: “Great. Look what they’re doing there.”

We gradually gathered some points, though, and during the second half of the season earned enough to finish second and gain promotion.

At that time, nobody wanted to play for Hoffenheim – in this little village, in the second division. That summer, we were at a pre-season training camp in Austria when I decided I was fed up of speaking only to experienced players. We decided to look only for very young, highly talented, market-value players. I spoke to my scouting department, and then tried to contact the players myself and convince them to come.

One of those players signed, and the season started. After the first three games, we had only one point and were second from bottom. History was repeating itself.

We had one more week until the closure of the transfer window, and in that week we signed five players. One of them was Demba Ba. The others were Chinedu Obasi, Carlos Eduardo, Luis Gustavo and Vedad Ibisevic. We lost to Freiburg, but after that we started winning games – and at the end of the season we again won promotion by finishing second.

In that second year, we played in a 4-4-2 with a diamond midfield. The strikers were Ba and Obasi – Ibisevic was mostly on the bench and came on for either Demba or Chinedu, who then went to the Olympics with Nigeria.

We played the same formation with Ba and Ibisevic, and during pre-season Ibisevic scored all over the place. At the start of that first Bundesliga season, we’d only signed Andi Beck from Stuttgart, but we won our first league game 3-0 at Cottbus.

A week later, Chinedu came back from the Olympics, so we had a problem – we had three top strikers. I told my coaching staff we had to change formation. We had to play in a 4-3-3 with three strikers.

Demba, Chinedu and myself had a few discussions at the time, but in the end we won so many games and scored so many goals that, after six months, we were top of the league ahead of Bayern Munich. From a village club to top of the Bundesliga in two and a half years – it was a fairytale development.

Our ambition at Hoffenheim was to get the best people for every single job. We also created new jobs that didn’t exist at the time. Lars Kornetka, my friend and colleague, became the first video analyst in Germany in 2007 – we brought him to Hoffenheim and, with my friend Helmut Gross, we educated him and taught him our style of football. He’s the best video analyst we have in Germany.

"he insisted we meet. He said he would arrive in one hour, by helicopter"

When I look back to the late 1990s, when I was head coach with Ulm, I had only one assistant coach and the goalkeeping coach. We even had to cut the pre-match and post-match analysis from one videotape to the other.

Today, you have 25 to 30 staff – specialists and experts in important areas – but at Hoffenheim then, like later at Red Bull, we were always trying to develop. By developing football teams, we also developed players.

I was in my favourite café, after my second spell at Schalke, in the summer of 2011, when my mobile phone rang. Dietrich Mateschitz, the owner of the Red Bull clubs, was looking for a new head coach for RB Salzburg.

I told him that I wasn’t interested, but he still insisted we meet. “I will be there in one hour. I will come by helicopter.”

"i told him he should be doing all the things he was doing in formula 1. instead, they were doing the opposite"

There was no landing place for helicopters at my house, so I asked the football agent Uli Ferber if he could land on the roof of his house, where there is an artificial grass pitch.

Dietrich was accompanied by Gérard Houllier, an external advisor, and for another two hours tried to convince me to become Salzburg’s new coach. When he realised I would not do it, he said: “Mr Rangnick, what are we doing wrong in football?”

At the time, RB Leipzig were in the fourth division of German football, and Red Bull Salzburg had only an average team. Sebastian Vettel was soon to win the second of his four consecutive Formula 1 world titles driving for Red Bull.

“You should be doing all the things that you’re doing in Formula 1,” I said. “Instead, you are doing the opposite.

"when we signed kimmich, he was almost completely unknown"

“I would only try to recruit players signing their first or second contract, because most of the players in those two teams play there for financial reasons and because it’s nice to live in cities like Salzburg and Leipzig.”

It had nothing to do with developing their own careers.

He also had New York Red Bulls and Red Bull Brasil, so I also told him: “If you have four football clubs, I would create synergies between the clubs. I’d have more or less the same style of football; the same scouting department. Develop a mutual corporate identity with all the clubs.”

In the end, that is how we agreed I would become sporting director of the two European clubs, in two different leagues, in two different countries. In the space of a week, I had to appoint two head coaches. Next, I decided to create a completely new team. The first signing was Sadio Mané, who was 20, for €4m from Metz. The second was Kevin Kampl.

"every day, haaland would listen to the champions league anthem"

When we signed Joshua Kimmich in 2013, we had just won promotion to the German third division. He was an almost completely unknown 18-year-old.

He didn’t want to play one more year in the under-19s at Stuttgart. He wanted to play senior football, so we could loan him for two years. In his first training session we played four against four, and this 18-year-old told off the other players who were not putting in the effort to win. It’s no coincidence he has developed into the player he is – he wanted to get better every day. He hates to lose, and wants to be competitive in every game.

Mané, Keïta, Upamecano, Kimmich and Erling Haaland all had that in common. They wanted to get better every day, and they had a top mentality – the most vital part. Erling was always the first every day to training, and the last one who left the training ground. Every day, when he drove to the training ground, he would listen to the Champions League anthem in his car. That tells you a lot.

"i never told the head coach which players he should play"

We were always looking for the best people, and to create new job profiles. One of those was liaison officer.

We signed lots of players with an African background – Ibrahima Konaté was another –and it was not just about developing them technically, tactically and physically. We also needed to make sure we had someone to help them to get adjusted to their new environment. These people were so important to the development of those players – without them, they wouldn’t have developed in the same way they did.

It was also new for me, because until I started at Red Bull I’d worked as a head coach. For the first time, I was not the head coach. I had to find out which lines I could cross.

The locker room was the area the head coach had to decide – I never told the head coach which players he should play. It was also new for the coaches to have a sporting director who thought about and saw things like a head coach.

After the first couple of months, and as soon as the coaches – Roger Schmidt at Salzburg and Alex Zorniger at Leipzig – realised it was for their benefit, it was almost perfect.

Roger always wanted to play with a 4-2-3-1. The striker was Jonathan Soriano, but we had a second striker, Alan. After he came back from a knee injury, whenever he came on he scored, so Roger and I had a discussion.

“Roger, we have two strikers who will score 30 goals each in the Austrian league, so we have to play both of them. It makes sense that we play with two central strikers. We can then directly attack the opponents and still have Sadio Mané on the left and Kevin Kampl on the right.”

We decided on a formation that, in Germany and Austria, no other team has played – 4-2-2-2. A back four, two number sixes – one was more like an eight – two number 10s, and two strikers. Mané and Kampl didn’t play on the wing; they played in a 'semi-position' we called “the red zone”.

From then on, we were fantastic, and very difficult for the other team to attack. That was the job of the head coach and the sporting director – to make sure that the team could perform and win, and that the players were able to develop.

We have clear-cut profiles of the players we want, and the same is true with coaches. We knew what kind of coaches we would need for the future, so we always had a shortlist. We also educated our scouts in our style of football, otherwise they wouldn’t have known what kind of players we were looking for.

The same day I discover that I do not want to learn any more is the day that it is over.

Ralf Rangnick was the keynote speaker at the inaugural Coaches' Voice Coaching Conference. To watch his full session, watch here on CV Academy