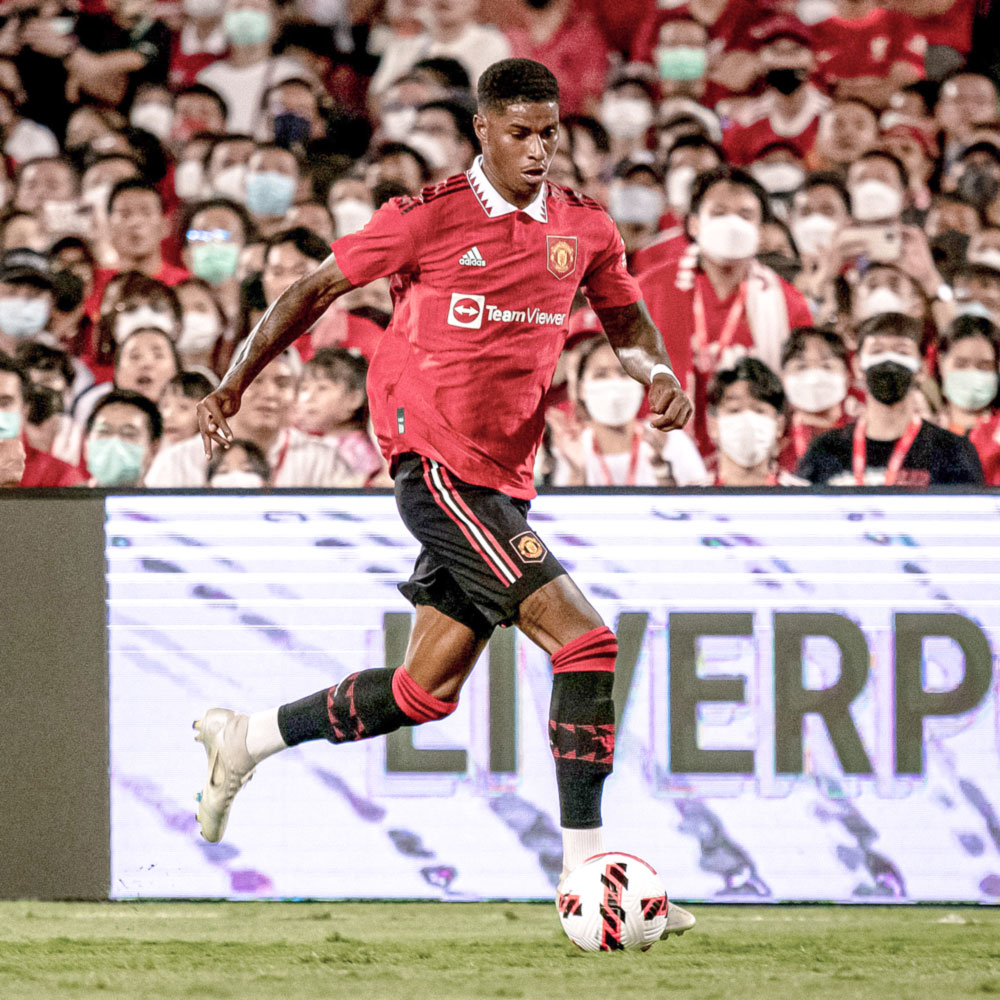 The 2021/22 season proved one of struggle for Manchester United, and few players embodied that struggle more than Marcus Rashford. The England attacker was plagued by both fitness and form concerns, and as a result registered the worst returns of his career. A total of four Premier League goals, and only five across all competitions, pointed to a player way short of his scintillating best. Under new manager Erik ten Hag, however, Rashford has an opportunity to prove his talents and his worth as a versatile and dangerous attacker who can operate anywhere across the front line.

"I think for me, it is just fresh ideas, fresh tactics and a new personality that has been added to the team," Rashford said of his new manager. "I am looking forward to working with him, but also for us to give ourselves time as well to fit into what he wants us to do and to really feel natural doing it. He is very detailed out on the grass and even in the rules of each game. Like I said, it is all fresh, and when something is fresh it is good for the mind and good for the body. We are all looking forward to working with him."

It was towards the conclusion of the 2019/20 campaign, under Ole Gunnar Solskjaer, that the debate surrounding Rashford’s best position finally appeared to end. He has produced some of his best football playing from the left – a position that provides many of the Premier League’s most potent goalscorers.

His pace, both when running at defenders with the ball and making runs beyond his opponent without it (below), means he is a threat wherever he plays. He is skilled at cutting infield and shooting, although he could improve his accuracy. He does have the technique to strike the ball with no little power, however.

Rashford constantly tests his direct opponent with his movement. He favours dropping deep and receiving possession wide before dribbling diagonally towards goal. In doing so, he can gather momentum and work himself space to shoot, or dart on the outside. Defenders prefer not to follow Rashford when he drops, because of the risk that comes with leaving spaces in behind. There are few who could genuinely compete with him in a race.

Rashford is at his most threatening, however, when he moves into a position on the shoulder of the last defender. This is usually on the outside of the opposing right-back, to make a diagonal run towards goal (below). Such runs require the quality of pass from midfield to find them, of course. With Paul Pogba no longer at the club, Bruno Fernandes offers the most likely creative source behind Rashford. Once found in those areas, he has the pace and composure to finish a good proportion of the chances those behind him create.

Given opponents often double up on him (below) because of that, Rashford can thus create space elsewhere for his teammates. He has the awareness to spot a teammate’s run, but can struggle to execute the pass he has seen – although there have been signs of improvement here. He registered three assists of real quality in United's final eight Premier League fixtures of the 2019/20 season, after the pandemic-enforced break, having managed just four in their first 30. His Premier League assist count rose to nine in 2020/21, although during his difficult 2021/22 campaign that dropped to two.

At his best, however, his ability to create as well as finish makes him a more unpredictable opponent for defenders who once expected him to try and cut in to shoot at every opportunity. This is another dimension that makes him even more of a threat.

Under Solskjaer, Rashford became a key part of the United attack. He played mostly on the left of the three supporting attackers in a 4-2-3-1 shape – a formation Ten Hag has used to great effect – and often higher than his equivalent on the right.

The arrival of Fernandes in January 2020 gave United an increased presence in central attacking positions, and he benefited Rashford greatly. When Rashford runs with the ball towards his opposing right-back, Fernandes provides an option for a square pass that previously didn't exist. He can therefore either play one such pass and swiftly look for a return pass in behind – one Fernandes has the ability to execute – or use Fernandes as a decoy and instead feint to go inside before dashing around the outside with the ball.

He has also developed his ability to create from deep. If there isn’t space to run in behind, Rashford can drop to allow the number nine to make a run across him into a more advanced position on the left. This often takes a defender across with the forward, creating space for others to move into – where Rashford can find them (above). He often plays a chipped pass, which is difficult to deliver. Attacks with these patterns are more effective when he passes on the floor.

Ten Hag has a job on his hands to improve Manchester United in a whole range of areas. Rashford has the talents to contribute to the team's attacks against sides that like to sit deep but also on the counter, where his ability to carry the ball at pace makes him particularly valuable. If he can recover both his form and fitness under the Dutchman, he can once again prove one of the club's most dangerous and appreciated assets.