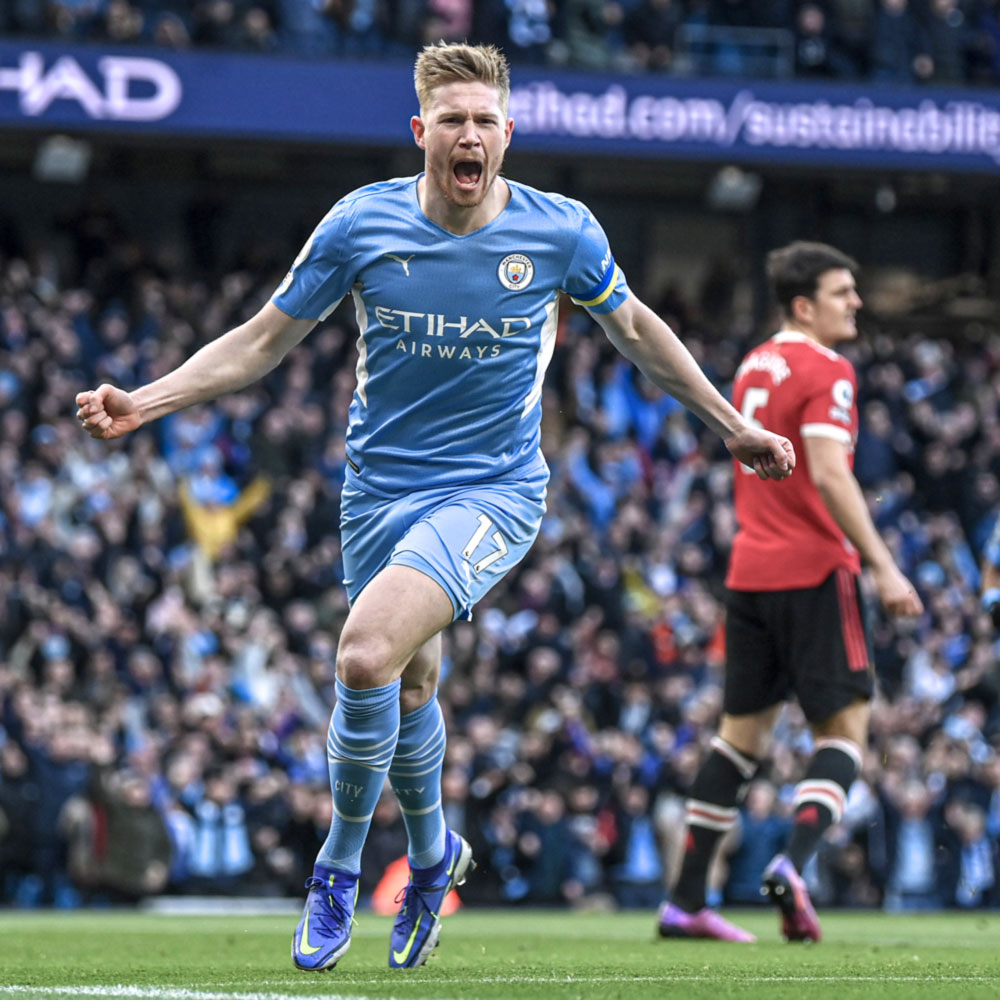 Manchester City responded to Liverpool's victory over West Ham with a comprehensive defeat of neighbours United in an ultimately one-sided derby at the Etihad. Kevin De Bruyne opened the scoring in the fifth minute, and netted a second to restore the home side's advantage after Jadon Sancho had equalised with a fine finish halfway through the first half. Pep Guardiola's team stepped it up another level after the break, with Riyad Mahrez slotting home from a De Bruyne corner and smashing a second past David de Gea as full-time approached.

"The second half was one of the highest levels we have played at in years," said Guardiola after the game. "I'm not from Manchester, but I know what it means to our fans to win the derby. We should have scored more goals. We are trying to win the Premier League with 10 games left, and we have to make almost all the points to be champions. I have the feeling many things are going to happen until the end of the season – tight games are going to happen."

United interim manager Ralf Rangnick was left to respond to suggestions from prominent media pundits that his team simply gave up against superior opponents once the third goal went in. "I didn’t have the impression that they didn’t try, but it is difficult against a team like Manchester City when you are 3-1 down against the best team probably in possession on the planet," he said. "We played a good first half but we were still 2-1 down, so it was clear we still had to try and score one or two goals to have a chance to win the game. We didn’t."

Pep Guardiola set his Manchester City team up in their familiar 4-3-3 attacking shape, against Manchester United’s 4-4-2 block when defending. The visitors used their front two and central midfielders to cover central areas, so the hosts focused on building through the inside channels. Kevin De Bruyne and Bernardo Silva often received in between the United winger and central midfielder on their sides, before connecting with the wide attacker and full-back. Rodri was able to drop back from his position as the single pivot, to allow either John Stones or Aymeric Laporte to step into midfield with the ball and connect with the wide triangle on that flank (below). Phil Foden started as the central forward, but positioned himself more towards the City left, occupying Victor Lindelöf more than Harry Maguire.

City’s left side was particularly influential throughout the game, with the vast majority of their first-half attacks – and both goals – coming from this flank. Kyle Walker held his position at right-back, acting as cover against any United counter-attacks, while João Cancelo pushed forward to combine with Silva and Jack Grealish on the left. Foden’s supporting movements to that side led to multiple quick combinations that broke through United’s deeper block, while De Bruyne moved into the central-forward spaces that Foden had vacated (below). He was afforded even more space as a result of Riyad Mahrez holding his width on the right wing, as City worked to stretch the United back line as much as possible.

United attempted to cover the inside channels earlier in the second half, with their wingers tucking inside to support the central midfielders. This meant Silva was more effectively screened on the left, but it also gave Cancelo more licence to push further forward and receive higher than previously. This also gave Grealish the opportunity to drift inside and look for central gaps in which he could receive and connect with the front line as a number 10 (below). This space was only enhanced by Foden playing more consistently as a centre-forward, no longer drifting so much to the left, in the second half.

City dominated possession throughout, but particularly so in the second half, when the United press lacked compactness, organisation and discipline. To play through the first two defensive lines, the hosts often looked to form a box in midfield. Grealish continued to move inside, Silva dropped to support Rodri in what looked much like a double pivot, while De Bruyne moved across to complete the midfield quartet (below). City used this to connect their back line with the front trio, which now featured the advancing Cancelo alongside Foden and the still-wide Mahrez. This new structure in midfield negated the impact of United moving their wingers inside to cover the inside channels, as City exerted complete control on their way to an impressive victory against bedraggled opponents.

Using the inside channels

Ralf Rangnick set his team up in a 4-4-2 formation against City’s 4-1-4-1 defensive block. Paul Pogba and Bruno Fernandes acted as the forward pairing, supported by wingers Jadon Sancho on the left and Anthony Elanga on the right. The wingers looked to pin the City full-backs, which gave Pogba and Fernandes the chance to drift into the inside channels and connect with the back line (below). This enabled good progress around the City block, where forward runs from Sancho and Elanga helped the team break into the final third.

Fernandes and Pogba often acted as a traditional number 9 and 10 pairing, with one dropping short into the inside channels to receive between the lines, and the other running beyond to stretch the City back line. These movements helped United break through the hosts’ block via the inside channels, but also opened up a more direct route for runs beyond the high back line (below). The wingers then narrowed as they entered the final third, in what was in effect a converted 4-2-4 attacking shape built on fluid movements around each other – as seen for Sancho’s excellent equaliser midway through the first half.

United’s attacking output was restricted to counter-attacks in the second half. Whenever they did manage to regain the ball high, or through midfield areas, they targeted the space in behind City’s high and wide full-backs and often looked for the significantly narrowed far-side winger – Elanga in the example below. Although the front pair pushed the hosts’ back line deeper with direct forward runs (below), the City full-backs recovered well, often doing enough to reduce the threat of Elanga and Sancho towards the penalty area.

City dominated the ball in the second half, but whenever United did enjoy any possession the hosts counter-pressed aggressively and with intent, committing numbers around the ball immediately upon losing it. The visitors did show some ability to play through this, most notably when Pogba dropped deep to support the build (below) and enable switches of play to the far side – but subsequent attacks were largely based on individuals and United struggled to really put any concerted pressure on the City central defenders. Substitutes Jesse Lingard and Marcus Rashford offered little in the way of attacking options when introduced, as the United forwards were often isolated when breaking into the final third as the game wore on. Ultimately, Rangnick’s team were well beaten by a much better team.