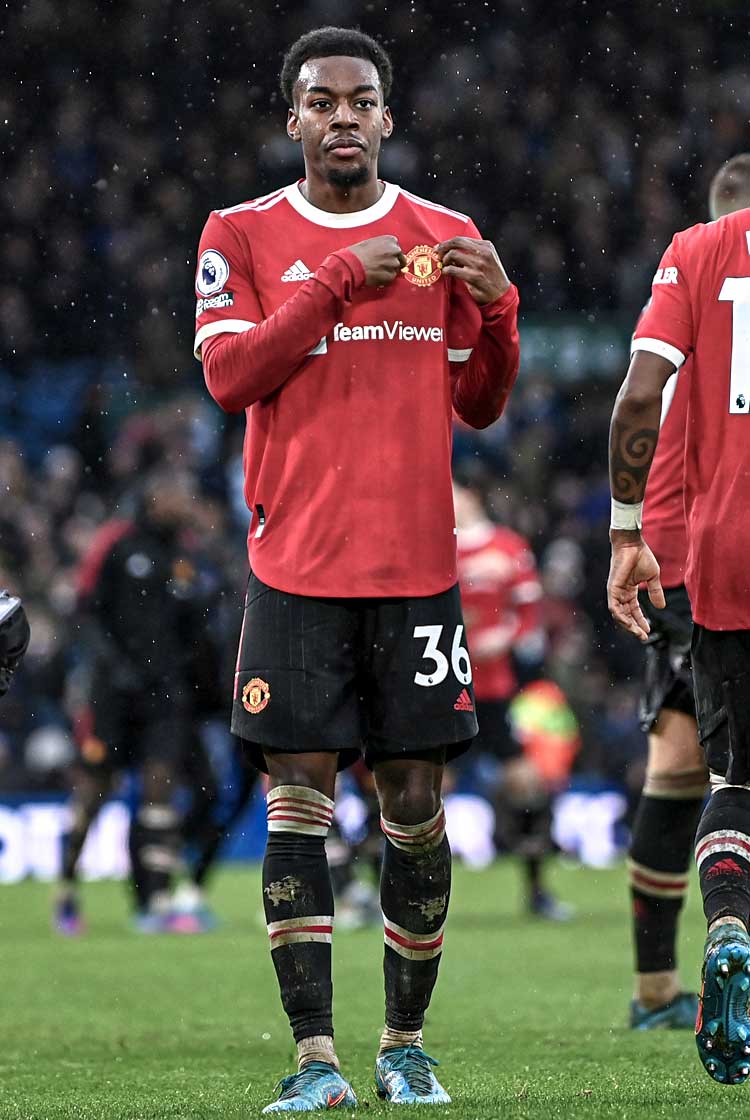 Having moved from his native Sweden to Manchester aged just 12, Anthony Elanga had already spent seven years at United when he was handed his competitive debut in May 2021. However, his debut only came under Ole Gunnar Solskjaer when the 2020/21 season was winding down. When it appeared his opportunities would be limited further by a series of big signings that summer, the youngster considered his future.

Ralf Rangnick noticed Elanga in training immediately following his appointment as manager in December 2021. Within a week, the Swede was starting on the left wing at Old Trafford in the Champions League. A month later, Elanga was making consecutive Premier League starts for the first time. He very quickly became an important player for the German, who says he convinced Elanga to stay at Old Trafford.

"He had almost already decided to leave [in the January 2022 transfer window]," said Rangnick. "I said, listen, I want you stay and see how you are doing in the training games. He has [since] shown what is possible in football with the right mentality, the right approach, and what he always does in every training session."

Elanga is a right-footed winger, who has predominantly played on the left side of the attack so far in his career. When dribbling, he takes lots of small touches, in a similar style to that of Eden Hazard and Jack Grealish. This helps draw opponents in, from where Elanga is able to change speed and direction simultaneously to beat opponents. The timing of his changes of direction needs a little work, as he often moves towards another defender or simply mistimes his move when in a one-on-one situation.

His change of speed is a huge strength, though, particularly when accelerating. He times his bursts to evade pressure and tackles, and is especially effective when cutting in off the left on to his stronger right foot (below). If he were to improve the timing of his acceleration when moving over longer distances, it could be an important improvement to his game.

When he makes movements to receive the ball, they are often well thought out. He takes his man away from the space he wants to receive in, before moving in the opposite direction towards the ball. This is the kind of movement that centre-forwards make with the aim of creating space for themselves to shoot, but Elanga does so to receive and increase his chances of being able to turn on the ball to face forwards. He is adept at receiving on one foot and then pushing the ball forward with the other. Doing so helps him maintain the fluidity of his team’s attack, and is useful when he is faced with several opponents. However, his first-time bounce passes after dropping towards the ball could do with improving; he sometimes requires a second touch to get the ball under control.

Elanga is more effective with his right foot than his left. He is able to deliver dangerous crosses, especially when cutting back inside from the left side of the pitch (below). His left-footed deliveries tend to only work when played low across the face of goal, and he is yet to show much consistency when playing lofted balls, driven crosses or cut-backs with his left foot.

Closer to goal, Elanga seems most comfortable when moving in behind before shooting, as opposed to cutting inside and shooting from distance. He lacks the balance and ability to decelerate sufficiently before attempting to shoot from range, which is in stark contrast to his changes of speed when he is looking to dribble past an opponent.

He could become a greater goal threat by improving his movement when the ball is on the far side of the pitch. His movement inside the box is not yet particularly smart, and he could do more to find space to get on the end of crosses. Instead of reacting to the cross, his movement should help dictate where the cross is delivered. This will help him forge better chances for himself, and find space to shoot without having to suddenly slow down.

Out of possession, he presses with intensity and shows a good understanding of his role in the team. He makes most of his regains through his pace over a considerable distance, which he uses to gain momentum and knock his opponent off the ball. From a static start, due to his slight frame – which will develop as he matures – he can struggle to win the ball.

Cutting in from the left

Under Ralf Rangnick at United, Elanga was initially used on the left side, cutting in from his position in a very narrow 4-2-2-2 structure. The wide midfielders move inside both with and without the ball, often looking to make penetrative runs beyond the centre-forward pairing. When he runs in behind to the left side of the front two, he can struggle to provide quality final balls as he is pushed out wide on to his left foot.

His most effective crosses come when he cuts back inside, often using the overlapping runs from left-back Luke Shaw or Alex Telles as a decoy. These are best when he sends in an inswinging cross, which the likes of Cristiano Ronaldo benefit from most with a run across his marker. He also sometimes finds the far-side winger with a cross, or number 10, Bruno Fernandes, when he arrives late in the box.

From a position on the left, Elanga combines effectively with Fernandes whenever a 4-2-3-1 shape has been used. His movements off the flank during counter-attacks allow Fernandes to drop and link with the double pivot, while Elanga looks to get into a position to threaten goal (above).

Direct runs on the right

Elanga has also played on the right flank, with the youngster swapping wings mid-game. This has happened most in United’s 4-2-3-1 attacking shape, with Jadon Sancho on the other wing. Fernandes provides support beneath Elanga, and United have had some joy with the winger making a forward run before setting the ball back to Fernandes in the inside channel. Elanga stays wider on the right than when he plays on the left, and is more likely to receive beyond the opposing left-back, moving into positions to put in a low cross or shoot across goal – as he did with his important Champions League goal against Atlético Madrid (below).

The right-back behind Elanga then adapts his position to move inside, especially when Fernandes remains deeper. Centre-forward Ronaldo will then come across, with the double pivot covering central spaces and providing a route through which to switch play. Elanga tends to make more close combinations out wide on the right than he does on the left, and will dribble directly towards goal when he has the space to do so. He will often combine with Fernandes to try and get in on goal.

Elanga has been thrown into regular first-team football quickly since Rangnick's arrival, but he looks more than ready for the challenge of Premier League football. The exposure he gets to playing alongside the likes of Ronaldo, Fernandes and Sancho will give him a fantastic opportunity to learn from some of the very best around.