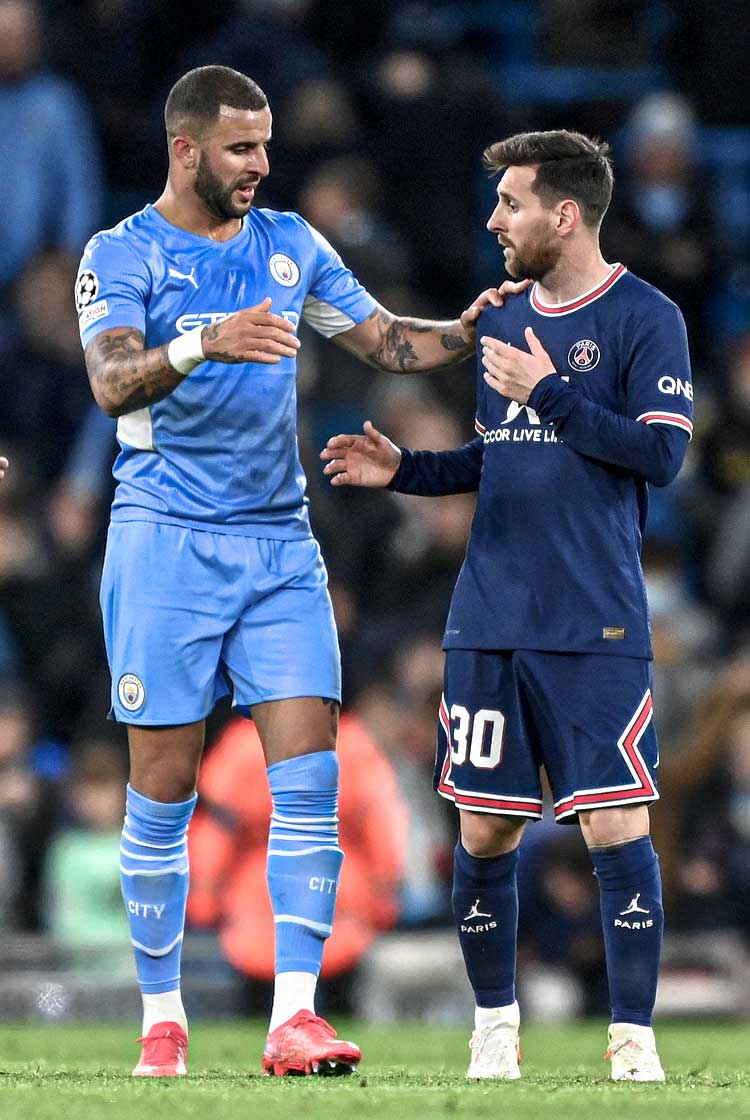 Manchester City secured top spot in Group A of this season's Champions League after coming from behind to beat a star-studded Paris Saint-Germain at the Etihad Stadium. Lionel Messi was unable to affect the game against his old manager, Pep Guardiola, under whom he won so much at Barcelona, and fellow superstar Neymar had a similarly quiet night. Kylian Mbappé did manage to break the deadlock to put Mauricio Pochettino's side ahead, but Raheem Sterling and substitute Gabriel Jesus struck to turn the game on its head and earn City a vital win. Pochettino has been linked to another job in Manchester – the vacant managerial post at United – but insists his team are improving.

“We need to improve in all aspects, although we have improved from the start of the season,” Pochettino said. “The team are better than a month ago, and they are much better than two months ago. Little by little, step by step.” Guardiola, meanwhile, says his team can learn from their comeback win. “It is a good lesson,” he said. “When you are losing, you have to continue. We knew a draw was a good result for us, but we won.”

Central overloads and wide 2v1s
Manchester City set up in a 4-3-3 formation in possession. Rodri, Ilkay Gündogan and Oleksandr Zinchenko started in midfield, with Raheem Sterling and Riyad Mahrez positioned either side of Bernardo Silva, who operated as a false nine (below). This system was designed to create central overloads, with Silva dropping into midfield while Sterling and Mahrez maintained the team’s width. Full-backs Kyle Walker and João Cancelo could then make attacking runs to create 2v1s out wide in the knowledge that PSG's wide forwards, Kylian Mbappé and Neymar, were unlikely to track back.

City's out-to-in high press
City implemented a high and aggressive press. Sterling and Mahrez shoulder-line pressed the PSG centre-backs (below) while Silva occupied Leandro Paredes. Zinchenko and Gündogan started centrally but were always ready to move out to press the PSG full-backs if the ball went wide on their side. The idea to show PSG inside was most likely to reduce the chances of them getting Mbappé or Neymar into one-on-one races in the channels in behind the City defence. Had they shown play outside, with the City full-backs engaging the PSG full-backs, centre-backs Rúben Dias and John Stones would have been left isolated against the PSG forwards. Instead, City made lots of regains and forced plenty of errors through their high press.

Switches of play were key
City were able to dominate the game through exploiting the wide areas. They did this through diagonal switches of play after drawing PSG out to one side. Once again, this was made possible due to the low-intensity out-of-possession work from PSG’s front three. With Ander Herrera and Idrissa Gueye tasked with engaging in the wide areas, the entire PSG midfield three had to shift across. As City recycled the ball and switched play, the distance for those players to cover to get across to the other flank was simply too big, and the lack of pressure on the ball allowed Rodri to pick his passes with ease (below).

As soon as the diagonal pass was executed, the full-back on that side – Walker or Cancelo – began their forward run to try to create a 2v1 out wide. Neymar and Mbappé were not consistently willing to track these runs, so City were able to generate lots of opportunities from wide areas. Both of City’s goals came after switches of play when there was a 2v1 on the far side of the pitch.

Wide overloads
As well as the diagonal switch of play, City were able to exploit the wide areas through simple overloads. Due to the lack of recovery runs from the PSG front three, any overlapping runs from the City full-backs had to be tracked by Gueye (below) or Herrera. This would then free up a City midfielder to recycle play through, and enable a switch of play. If the recycle point was blocked off by Gueye or Herrera, the overlapping runner was left open. Initially, City’s crossing position was a little too far from goal. However, as their attacking runs became more frequent, they were able to access more dangerous areas and execute threatening crosses and cut-backs.

PSG hoped to find Messi and Neymar in space
PSG used a 4-3-3 formation in possession. Achraf Hakimi, Marquinhos, Presnel Kimpembe and Nuno Mendes formed the back four. Leandro Paredes, Ander Herrera and Idrissa Gueye made up the midfield three, with Neymar, Kylian Mbappé and Lionel Messi in attack (below). This structure was designed to stretch City through Mbappé's high position and create space for Messi and Neymar to drop into midfield and receive on the half-turn.

First-line overloads
Paredes frequently dropped in between Kimpembe and Marquinhos so that PSG could build with a back three. This was useful when City used their resting shape of 4-4-2 –  when they weren’t pressing high – because of the 3v2 first-line overload that it created. As PSG shifted the ball across the line, they regularly managed to exploit the right half-space between Rodri and Sterling. This position was often occupied by Herrera (below) or Messi; the line-breaking pass into that zone triggered a forward run from Hakimi on the right side.

Lack of defensive work from the front three
PSG’s major issue, and the fundamental reason why they lost the game, was the lack of collective defensive effort from Messi, Neymar and Mbappé (below). This led to the PSG midfield being stretched throughout the game, with the impossible task of covering the width of the pitch and applying pressure to the ball, while also protecting the space between the lines. This allowed City to generate simple overloads in both wide areas, which is where both goals came from.

Playing through the City press proved rewarding
Despite City applying an aggressive high press throughout the game, PSG continued to try to play through their opponents. This made sense, as the alternative – going more direct – would not suit their attackers. PSG were rewarded for persisting and they drew City’s wide players (the wingers and full-backs) out, which opened up space to play in behind. The combination of shorter passes to tempt City out and Messi's movement towards the ball was enough to open up the space for Mendes to run in behind from left-back (below). After PSG had accessed this area, the true quality of the PSG front three showed with some good combination play before Mbappé scored. However, good chances proved hard to come by for Pochettino's team, and they were unable to build on their lead before City fought back to earn a deserved win.