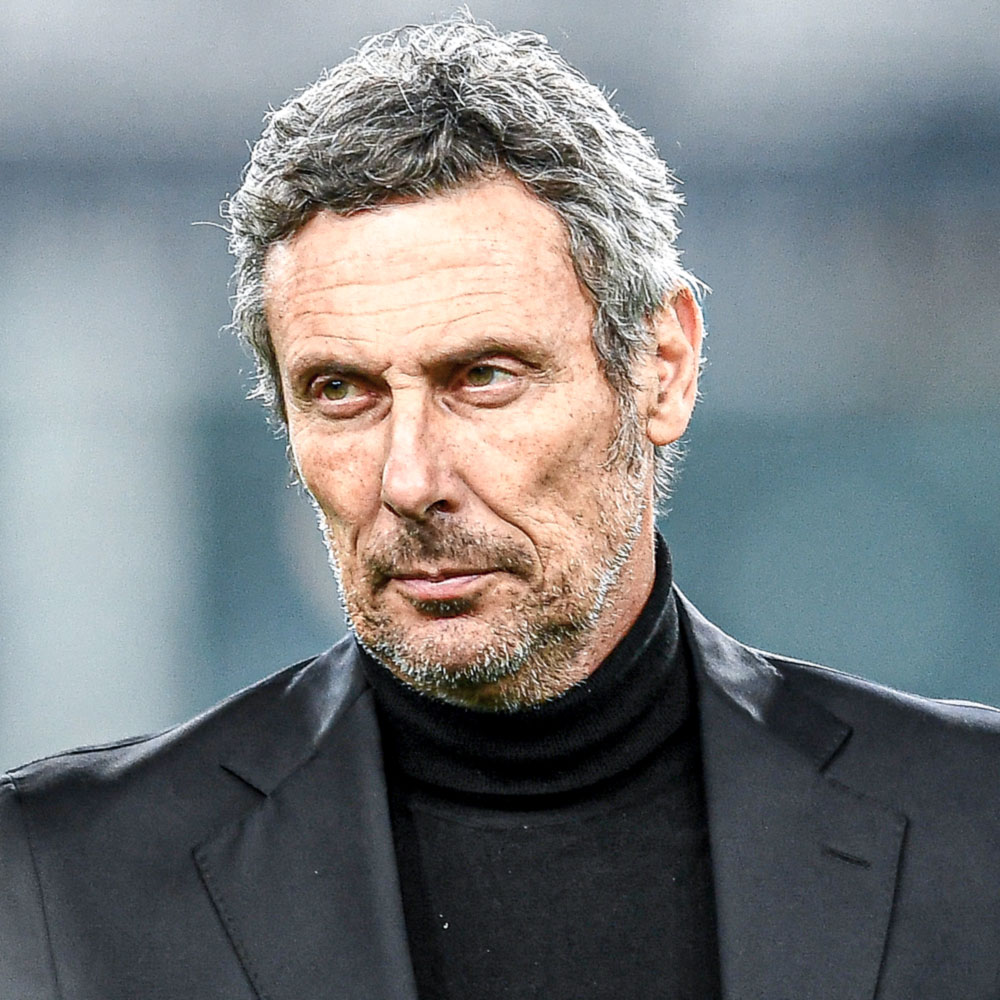 It wasn’t until my mid-20s that I read La Gazzetta dello Sport for the first time.

Before then, I didn’t really even want to work in football. I played the game, but I just wasn’t that interested in it.

I played for many years in Serie D – and I always enjoyed playing, but I didn’t like training sessions that were not well structured. For example, those in which we had to run for hours, or when the sessions lasted three hours in the afternoon. I knew that this kind of training was not really beneficial to the squad.

While I was still playing, I decided to go to university. I got one degree in pedagogy, which definitely helped me coach young players, and another in human motor science.

Playing football and studying was not a burden for me. Actually, it was very useful to combine both. After my degree in pedagogy, I studied for a master’s in didactics. This taught me how to transfer my knowledge to others, and to understand if my players had understood my ideas.

When I finally decided to follow a path in coaching, I started to see things differently. My goal was to coach at the highest possible level, so I stopped playing and started studying.

Coaching young players taught me that you have to have very clear ideas, and that the first objective is to get every player to evolve during a season. You can achieve this by improving the players’ technical skills, or their tactical skills, or both. Ultimately, you can also improve their competitiveness by helping them to win more games.

I was also able to reflect on my coaching methods, and how I could apply them logically to teach and help players improve their skills. I learned a lot about managing a group of players.

"roberto wanted the final decision on all aspects of the club, on and off the pitch"

Being Italy’s Under-17 national coach was a great experience. But if I wanted to make a living as a football coach, I could not afford to continue in the role. The salary was not big, and that made it difficult for me to concentrate exclusively on football.

My first experience as a head coach in professional football was with Treviso in the 2008/09 – and that was a difficult adventure. That season, the club went bankrupt. Neither I nor some of my players were paid for a long time. During the winter transfer window, a lot of players literally ran away from the club.

From there, I moved on to a very short and disappointing period as head coach at Triestina. But both experiences taught me that, in difficult periods, you see best how people react. I am reminded of something I always say: “A calm sea never made a skilful sailor.”

I had met Roberto Donadoni (above, right) during my time with the Italy Under-17 team, when he was head coach of the senior team. We were introduced by Andrea Pazzagli, my goalkeeping coach at the time and a former teammate of Roberto at Milan. We became close friends; eventually, he asked me to study and analyse Italy’s opponents before Euro 2008.

When Cagliari called upon Roberto to become their coach in 2010, he asked me to join him. I wasn’t sure. At the time, I wasn’t thinking about working permanently as an assistant coach. A couple of weeks later, Roberto called me and asked me again to join him. This time, I felt I was ready to work with him.

Our working relationship changed over the eight years we were together – first at Cagliari, then Parma and Bologna. In the beginning, Roberto wanted to manage everything, from training sessions to matches. He wanted the final decision on all aspects of the club, on and off the pitch. But after the experience at Cagliari, he started to delegate the training-ground work to me.

Roberto then focused more on player management, as well as media relations and other matters outside training. This helped me to develop a lot as a coach, because I had more opportunities to prepare for matches, to study our opponents and to adjust our tactics.

In the summer of 2018, Chelsea hired Maurizio Sarri as their new manager. Maurizio called me, and the next day I was in London. Before I left I called Roberto, as an act of courtesy, and asked him if I could join Maurizio. He was very kind and encouraged me to do so.

I had met Maurizio several years before, when we attended the master’s course for coaches in Coverciano, at the headquarters of the Italian Football Federation in Florence. As fellow students, we shared ideas and followed a similar learning path. That relationship has endured, even when we were both coaching in the lower divisions in Italy.

Coaching Chelsea was a fantastic experience – not only because we won the Europa League (below), but also because we managed to overcome a lot of difficulties along the way.

I remember we started everything late. We had very few pre-season training sessions, as many players had been involved in the semi finals and final of that summer’s World Cup in Russia. In addition, we had to play friendlies all over the world and so couldn’t really work properly with the team.

I think both the players and the fans understood Maurizio’s philosophy from the start. At the beginning, results were very positive and everybody, not only Chelsea fans, were in favour of his ideas. However, when the team did not get the results, despite having more than 70 per cent possession in some games, the English spirit of criticism came out in a hostile way.

I believe that neither the club nor the fans fully understood that Maurizio had to be given more time. Only with time could all those details he was working on so meticulously have made a significant difference.

When we started at Chelsea, we didn’t know the club or the Premier League very well – although we had Gianfranco Zola (below, left) and Carlo Cudicini, two former Chelsea players, there to help and guide us. I thought I knew everything because I had seen so many games, but working in that environment for the first time is something different. Maurizio himself clashed with some players because of his training methods, which are defined and can become an obsession for him.

Midway through the season, however, he decided to take a step back and adopt a less rigid approach. This was crucial in helping the team achieve its goals.

To give an example, up to Christmas, only 13 players were genuine regulars. By the end of the season, as many as 20 were regularly involved in matches. That season, we played 63 games. It would have been unthinkable to get to the end of the season and still be competitive without using the entire squad.

I was disappointed to have to leave Chelsea so soon, because I wanted to continue working there with Maurizio. But he received an offer from Juventus, and I can understand that he wanted to go to Turin and have the chance to win Serie A. He did just that.

I knew I was not going to follow Sarri to Turin. Within two weeks of leaving Chelsea in the summer of 2019, I had received five offers to work as an assistant coach at other clubs. Udinese was closest to home, so it seemed to me the most obvious choice. I accepted a role as assistant coach under Igor Tudor.

By the start of November that year, the situation had evolved. Tudor was sacked after a midweek game – a 4-0 defeat at home to Roma – and the club asked me if I could take the team for the next game, away at Genoa that weekend.

A funny example: as assistant coach at Udinese, I usually rode in the same lift as the players, who used to speak to me with total freedom. The day I accepted the club’s offer to become head coach, it felt like one of the players was almost scared to share that same lift with me.

That amazed me, and made me reflect how, with different roles, that relationship changes – even when things are still all good.

We won my first game in charge, 3-1 against Genoa, so the club asked me to continue working for another week until the international break. Then they asked me to stay on for a while longer until they found the right person for the job. I continued as caretaker until Christmas.

After the Christmas break, the club and I realised that things were not going badly. The Udinese management decided to stay with me until the end of the season.

We avoided relegation, and at the end of the 2019/20 season the club asked me to be the head coach for the following season as well. It was only at that moment that I realised I had become Udinese’s full-time head coach.

To be honest, I wasn’t looking forward to the opportunity. In fact, I had previously turned down four offers to coach in Serie A, and I’m convinced I made the right decision every time. But I’m also very happy with how things have developed at Udinese; being the manager gives you the opportunity to see, directly and not through another coach, if your ideas are working on the pitch.

"as a head coach, you have to understand what the city and the club demand"

I think it is important for a coach to keep his own identity. In fact, each of the coaches I worked with as assistant was very different from the others. They all have unique characteristics that make them stand out.

For example, Roberto is always very calm, even in the most difficult moments. This is because he has played very important games in his career. I think that helps him to contextualise things, and keep calm in situations where others would probably panic.

Maurizio’s football methods and ideas are extraordinary. Throughout his career, he has acquired a solid and profound knowledge of tactics and concepts, which is why I admire him so much. His football theories are very refined.

What is common to all coaches, and I am seeing it at first hand, is that you have to quickly understand your environment, and what the city and the club demand. For example, Udinese is a unique club. They represent the values and ethos of the Friuli region. Hard work and resilience are the main characteristics of Udinese and Friuli society.

I don’t know if many assistant coaches want to become first-team managers. Many are really satisfied with what they do, and it was the same for me. I did that job for more than 15 years, and I consider it one of my greatest riches to have worked as both an assistant and a head coach.

This cocktail of experiences has contributed to making me a better coach, whether the sea is calm or stormy.