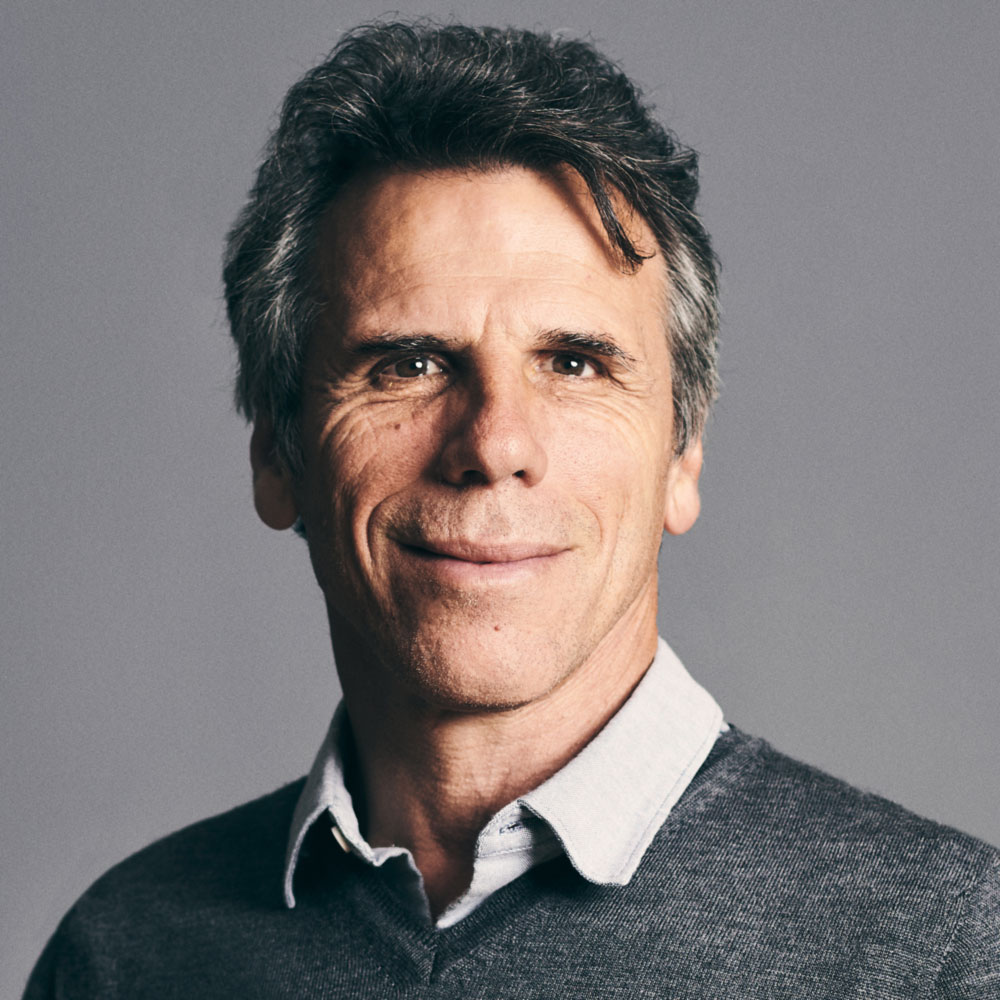 Funnily enough, the football I was introduced to as a player actually encouraged me to want to see the game played in a different way when I later became a coach.

I grew up playing in Italy, at a time when Italian football was very much based on stopping the opposition.

There wasn’t much focus or concern on what we would do; the coaches just wanted us to find ways to stop our opponents. That was the Italian way at the time.

Although I respected that philosophy – and I enjoyed success playing in lots of Italian-style systems – I felt playing that way meant the players lost a bit of freedom; they were too preoccupied with what the opposition were doing. You lose a bit of creativity from the team playing that way.

As a player (above), my mind was always on trying to score a goal; trying to dribble past a defender; trying to create chances for a teammate.

That’s what I wanted my team to focus on. So, when I made the move into coaching, I decided that would be my philosophy: to train my teams to always want to have the ball; to try and control the game, and set out to score goals.

There were two coaches in particular who I looked up to and tried to base my philosophy on: Pep Guardiola and Zdenek Zeman. Pep is obviously more well-known and probably a coach who everyone tries to copy, but Zeman (below) had a huge influence on Italian football and a huge influence on me.

"when i became a coach and studied the game more, i realised how important tactics were"

He has managed in Italy for a long, long time – almost 50 years, in total – and during a time when, as I mentioned, Italian football was very focused on defensive solidity and preventing the opposition from scoring.

His football was totally different. He was known for his offensive football. It was full of attacking movements and players making triangles all over the place. I loved watching his teams play and wanted to take elements of his football into my coaching.

As a player, I always thought winning was about being better technically or smarter or quicker than the opposition.

But then when I became a coach and studied the game more, I realised how important the tactics were to getting the most from those players. Creating numerical advantages for players in specific parts of the pitch was something I hadn’t really thought about as a player, but as a coach I had to change my mindset.

That was a big challenge for me at the start. When I was a player, I hadn’t ever thought about being a coach; I just enjoyed playing the game in a way that came naturally to me. I had to learn to appreciate the importance of the coach in creating situations for the players to thrive.

"i had been at chelsea for a long time, so there was a chance the west ham fans wouldn't welcome me with open arms"

I got my first experience in coaching a year after I retired, when I got a phone call from Demetrio Albertini. He was vice-president of the Italian Football Federation, and he invited me to work as Pierluigi Casiraghi’s assistant with the Italy Under-21s.

That hadn’t been part of my plan, but I got to work with a great friend in Pierluigi (below), and it was a great first stepping stone for me in my move into coaching.

When I got the chance to go to West Ham (below) in 2008, I suppose there could have been a chance that I wasn’t welcomed with open arms.

Obviously, I had been at Chelsea for a long time – they were my team – so there was a chance the fans wouldn’t take to me.

As it turned out, there was nothing to worry about on that front.

The West Ham fans were amazing to me from the start, and we built up a great connection.

"for me, the perfect team strikes the right balance between youth and experience"

When fans like your work, they get behind you 100 per cent. Luckily, they took to me and liked what they saw on the pitch. They liked what we were trying to do with the team, so they gave me their full support.

We played some really good football, particularly in my first year there, and we played with the kind of spirit that the fans wanted to see.

We brought through a lot of players from the academy and did well in some difficult circumstances.

It’s always been important to me to use young players. For me, the perfect team strikes the right balance between youth and experience. That’s because each one pushes the other: the young players want to be better than the experienced players; the older players don’t want to lose their place to younger players. It creates a good competitive edge in the squad.

I was lucky at West Ham, because I had a lot of quality coming through from the academy. They were known as a good academy team and my experience can only confirm that.

"there was a very different policy at watford, where it was more short-term – i had to adapt"

I had Jack Collison (below) coming through. Junior Stanislas and James Tomkins, too. These were very, very good players, and great professionals.

They took to life in the first team very well, and we were able to play some really good football as a result.

The success we had – both in the quality of the football we played and bringing through young players – helped build the connection I had with the West Ham fans. That was so important because it gives you the freedom to work in the way you believe is best. It gives you time to work on the project and develop things you think need developing – sometimes things that take a bit of time.

Things were different at Watford, where there was a very different policy. It was more short-term there – that wasn’t necessarily worse, but I had to adapt.

The owner, Gino Pozzo, had his own idea about how a club should be run, and he brought in a lot of players on loan.

That had its own use, in that we could bring in a variety of players from other clubs who were linked to Watford. That was a big advantage.

"vicarage road erupted. i've never seen anything like it. even now, i get goosebumps when i think about it"

On the other hand, you need to get these players ­– who have come in on short-term deals – to gel with the other players and get used to the English way of playing very, very quickly. There is no time for them to settle in first. That was a challenge I had to deal with straight away.

But we had a lot of quality young players in the squad: Matej Vydra, Fernando Forestieri, Nathaniel Chalobah, and many others. We also had some very good experienced players, too – Lloyd Doyley, Fitz Hall, Nyron Nosworthy, Marco Cassetti, Troy Deeney and Joel Ekstrand, for example. They helped the young players who were new to English football to settle.

That blend of youth and experience helped create a positive atmosphere. We bonded quickly as a group, and that meant we stuck together in tough times. It was a group who got behind one another. There was also plenty of talent in the squad, too.

It meant we were able to play well from the first game, and even though we didn’t get promoted, we created some incredible memories. We finished third and enjoyed one of those days you will just never forget when we beat Leicester in the playoff semi final, after Manuel Almunia saved a penalty in injury time and Deeney went up the other end to score the winner (above). You’ve all seen the video of it. Vicarage Road erupted. I don’t know if I’ve ever seen anything like it.

Moments like those are what football is all about. Moments you will remember forever and make the hairs on the back of your neck stand up when you just think about them. Even now, I am getting goosebumps thinking about it.

Those moments create a special bond between the people involved that will stay with them forever. That’s what we had.

"sarri is a very demanding coach, especially tactically. it can be tiring for the players"

I loved my time there, just like I did at West Ham – I loved both clubs – but Chelsea is, and will always be, my team.

So, when I got the opportunity to go back there, I couldn’t say no.

Chelsea is where I enjoyed myself the most. I enjoyed my football more than anywhere else, so going back as a coach really was great.

I wasn’t going there as the head coach, but it was still unbelievably exciting.

I got to work as Maurizio Sarri’s assistant (above), and I learned a lot from him. He is an excellent coach; fantastic at organising the team, planning ahead of matches and setting up training to suit his plans.

He got the team playing good football – maybe we didn’t start playing well quickly enough at the beginning, but I just think that was down to the fact that his ideas take a bit of time for players to get used to. He’s a very demanding coach, with a lot of training, especially tactical training. It can be tiring for the players.

"as an assistant, you see things in a more detached way. it helps you understand the game better"

Also, I think Maurizio took a bit of time to understand how demanding the Premier League is for players. There are times when it isn’t possible to train for a match as much as you’d like, because there are so many games and they are all competitive. Sometimes the players need rest.

There was a section of the season through the winter where we had a few problems, and the players were almost rejecting what we were doing because they were so fatigued. In hindsight, we should have recognised this sooner and made changes to help the players. Eventually we did, and we came good together.

It was a change for me to work as an assistant, but you can pick up so much from working with a coach like Maurizio, and I’m genuinely grateful for that chance. The experience will only have helped me become a better coach and manager myself.

As an assistant, you get to learn and try things out while taking a bit of a back seat. You see things in a more detached way, and that is important because it helps you understand the game better.

The main reason going back to Chelsea was so good, though, was the fans. They were fantastic – just as I expected – and they always will be to me. It was really special.

It was a pleasure for me to be back at Stamford Bridge with them and to create more memories with them.

We have a marvellous connection.

And it doesn’t get much better than that.