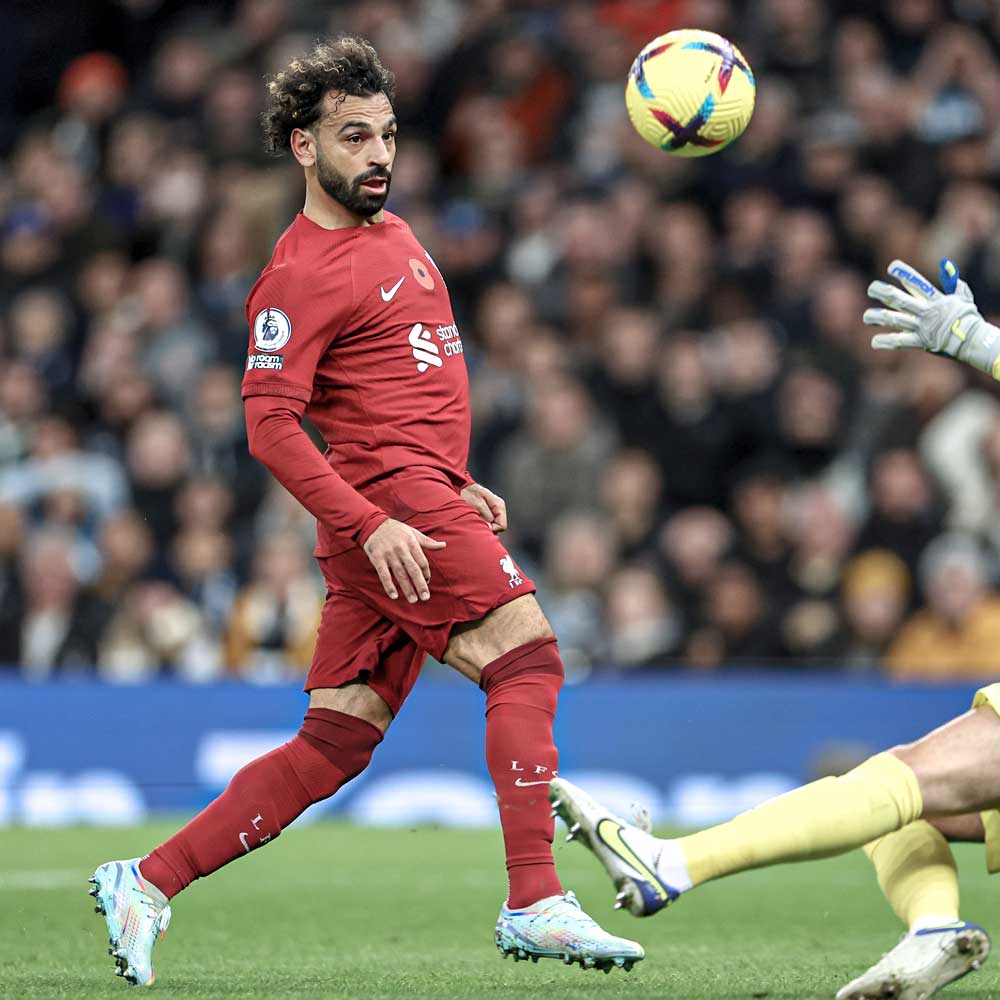 Liverpool secured their first away win of the Premier League season thanks to two first-half goals at Tottenham from Mo Salah. Spurs conceded the first goal of the game for the sixth match in succession, and the 13th time in 20 games this season, as Antonio Conte's side continued their unwanted series of slow starts. Liverpool took advantage with an early opener, before Eric Dier's costly mistake handed Salah a second of the game, and Liverpool were largely in control from that point onwards. Tottenham improved after the break and pulled a goal back through Harry Kane, but Liverpool's lead was too great and Jürgen Klopp's men held on for an important and morale-boosting three points.

Tottenham set up in a 3-5-2 in possession, but they initially struggled to sustain periods of possession. Harry Kane dropped shorter, while makeshift forward Ivan Perisic moved higher, working off any direct play into Kane. The width was provided by wing-backs Ryan Sessegnon and Emerson Royal, before Eric Dier moved wider from his slot at right centre-back (below). Rodrigo Bentancur pushed through the right inside channel with off-the-ball penetrative runs from central midfield, and Emerson moved inside as Dier advanced. This gave Kane close passing options to combine with between the lines, and he also looked to provide crosses for Perisic – one of which led to the Croatian hitting the woodwork.

Exploiting the space behind Alexander-Arnold

Whenever Tottenham failed to progress through the right inside channel, they looked to switch the play towards their left side. Sessegnon maintained the width and made direct runs in behind Trent Alexander-Arnold, who often moved over too far to support the rest of Liverpool’s back line as Spurs crowded the right (below). Alexander-Arnold’s position made it difficult for him to intercept or compete for the first contact when Sessegnon received the ball. As a result, Spurs regularly broke into the final third following a ball in behind the Liverpool right-back.

Crossing from the right

The hosts started the second half brightly, with Dier advancing alongside Emerson every time Spurs attacked rather than sporadically, as in the first half. This forced Liverpool to change from the 4-3-3 press they used in the first half to a 4-4-2 when defending inside their own half, with Darwin Núñez recovering back on the visitors' left. The home side pushed numbers into the penalty area to attack Dier’s crosses, with Sessegnon and Ben Davies attacking the far post, and Kane and Perisic occupying Liverpool’s centre-backs (below). Perisic hit the crossbar after Sessegnon kept a cross alive and cut the ball back, as the home side began to penetrate the Liverpool penalty area with purpose for the first time in the match.

Dejan Kulusevski and Matt Doherty were eventually introduced in place of Spurs’ wing-backs, with Perisic moving to left wing-back and Kulusevski joining Kane up front. Kulusevski had an immediate impact as the home side continued to progress forward well down the right, and he cut inside before sliding Kane in behind. Kane no longer had to drop to connect the midfield with attack, and instead could operate between and beyond Liverpool’s centre-backs (below).

Jürgen Klopp set Liverpool up in a 4-3-3 formation. Number eights Harvey Elliott and Thiago dropped out of central midfield, allowing full-backs Trent Alexander-Arnold and Andy Robertson to push forward. This pulled Tottenham’s wing-backs away from the rest of the back line, and Darwin Núñez’s movement out to the left provided an early outlet for Liverpool to attack around Spurs’ 5-3-2 block (below). Mo Salah then moved into the centre-forward position from the right, with Roberto Firmino dropping to add numbers in central midfield while Thiago or Elliott were temporarily absent. Liverpool opened the scoring as a withdrawn Firmino found Robertson, who then delivered from the left for Núñez to combine with Salah, who scored.

Liverpool’s wide combinations on both sides helped them progress around Spurs’ midfield three. The combinations between a winger, full-back and number eight drew a Tottenham wing-back out and dragged the Spurs block across to one side of the pitch (below). Thiago and Fabinho looked to switch the play consistently. Despite the meaningful wide combinations, however, Liverpool’s second goal came as Salah pounced on an Eric Dier error following a direct ball forwards.

Forced into a block

Tottenham forced Liverpool to drop back in the second half, with Núñez recovering back into the second line to help Robertson deal with the advancing Dier. This significantly reduced the attacking threat Liverpool had on this side compared to the first half. Salah and Firmino then acted as a first-line pair when defending, ready to counter-attack from a 4-4-2 block (below). The pair combined well to break Tottenham’s central-midfield counter-press on a few occasions, but unless they could find Núñez, who had much further to travel from his much deeper starting position, Liverpool’s attacking play was significantly less threatening.

Klopp eventually introduced Jordan Henderson and Curtis Jones, which allowed his side to switch from their 4-4-2 block back into the 4-3-3 attacking shape that had caused Spurs issues earlier on. Núñez moved into the centre-forward position in place of Firmino, with Salah and Jones as the wide attackers. When defending, Núñez now operated in Liverpool’s first line, giving him more influence on transition. Jones then dropped back into a left-midfield position when defending, and he rotated well with Robertson (below). Number eights Thiago and Henderson covered and supported underneath the ball. This solid shape helped Liverpool see out the game and secure a much-needed away win.