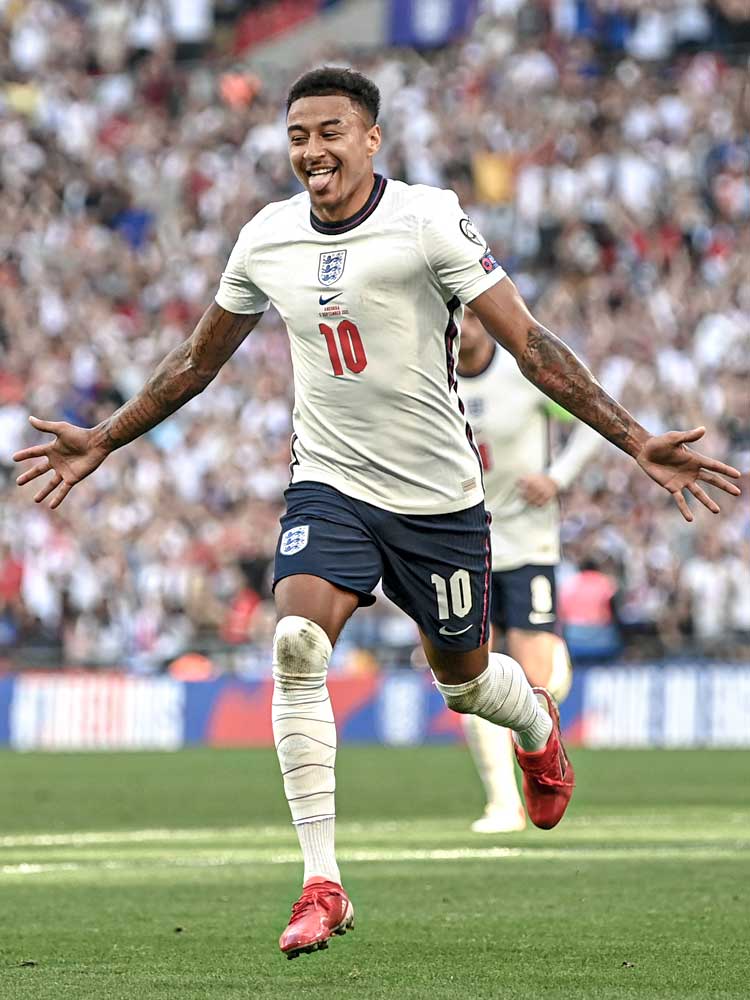 England eased to a fifth win from five in their attempts to qualify for Qatar 2022 on the occasion of their first match back at Wembley since losing to Italy in the final of Euro 2020. Gareth Southgate made 11 changes from the team that won 4-0 in Hungary, and saw the recalled Jesse Lingard give them the lead, and therefore control, relatively early in the first half. Harry Kane, later introduced as a substitute, doubled their lead from the penalty spot, shortly before Lingard's second goal and Bukayo Saka's first. They meet Poland on Wednesday, and Southgate said: "It’s a great incentive for us – if we can go to Warsaw and win then we really are in control of the group."

England were organised by their manager Gareth Southgate into a 4-3-3 formation. Their visitors, Andorra, defended with a 5-4-1.

Reece James provided their width from the right and from behind Jesse Lingard, who regularly drifted into the right inside channel. From the left, Bukayo Saka held their width, encouraging the right-footed Kieran Trippier to occasionally move infield and presenting Jude Bellingham with space to advance, off the ball, through the left inside channel and to alongside Patrick Bamford, who regularly withdrew into deeper territory to connect with those making runs through the centre of the pitch.

Trent Alexander-Arnold started in central midfield, from where he supported through the right inside channel and, given Lingard's movements, often did so from a withdrawn position. That Andorra spent significant periods defending with a low block meant England having to demonstrate patience as they built possession, and adjusting so that their full-backs provided their width on both sides of the pitch. When that meant Saka moving infield, it also meant he remained slightly withdrawn on the occasions Bellingham advanced; towards the right, Alexander-Arnold also advanced inside of James, and Lingard moved deeper to receive in front of Andorra's midfield three.

It was from Saka's cut-back that followed combinations through the inside channels and Bellingham and Saka penetrating through Andorra's defensive block that Lingard gave England the lead. They also threatened via Lingard's forward runs in behind – runs he often made when Bamford withdrew into deeper territory or drifted towards the left, and when Alexander-Arnold moved wider on the right to provide cover from behind James to provide penetrative passes to those between the lines.

Runs through the inside channels from England's wide forwards and attacking central midfielders proved significant in penetrating through Andorra's shape; Bamford, too, occasionally threatened in behind, and in so doing created increased space between the lines. When Alexander-Arnold and James then swapped positions, an increased crossing threat existed from the right.

During the second half, Saka and Lingard offered greater width, and Bellingham started to feature as a number 10, in front of the double pivot formed by James and Jordan Henderson. When they moved forwards as a team, Trippier and Alexander-Arnold advanced from full-back, Henderson moved to link with Alexander-Arnold, Bellingham drifted to the left, and James operated as their sole defensive midfielder.

When one of Andorra's wider central defenders moved out to confront the presence England offered in the inside channels, their remaining defenders formed a back four, often on the edge of the penalty area, so England attempted switches of play and direct passes into the wide areas to progress around that back four, in turn making England's full-backs increasingly influential. The introductions of Jack Grealish, Mason Mount and Harry Kane meant Henderson finishing as a lone defensive midfielder; Mount, Grealish and Trippier all favour their right feet, so regularly combined back infield, but did so impressively to continue to progress possession and win the penalty from which Kane scored. Saka's goal then followed the quickly taken corner executed by Alexander-Arnold and Lingard.

Andorra manager Koldo Álvarez set his team up into a 5-4-1 formation. Their opponents, England, defended with a 4-3-3.

On the rare occasions they had possession they favoured a direct approach that mostly involved playing passes to between full-back and central defender, targeting wide midfielders Ludovic Clemente Garcés and Jordi Rubio Gómez. Their striker, Aarón Sánchez Alburquerque, drifted wide to support at the second phase of those direct passes.

Play through the central areas of the pitch was directed into Sánchez, and supported via runs from their two wide midfielders so that those in central midfield could retain their positions to avoid risking space should England instead secure the first or second ball and to protect against potential counters – albeit at the expense of support around Sánchez. There were occasions when Rubio was more willing to be more aggressive in his movements, but even after they went behind, Andorra's priority was retaining their defensive block.

England efficiently provided cover against attempts to access Sánchez. Trent Alexander-Arnold and Jude Bellingham covered the inside channels when the hosts were building possession, and Jordan Henderson remained in the centre of the pitch to screen and block attempted passes into the striker. Behind him, the aerial presence of Conor Coady and Tyrone Mings often negated longer passes designed to encourage flicks on, and they were also very aggressive in stepping ahead of Sánchez to defend against balls into his feet.

Andorra defending from their very low block meant that their attempts to counter rarely progressed beyond their defensive half, and when Reece James moved into midfield England offered an increased defensive presence there. England's cover, and support around and behind the ball contributed to that – and not least because of the energy James and Henderson provided.

Even on the occasions the visitors progressed into the attacking half, and with Rubio's advanced position on the left, the counter-press being applied by England in midfield meant that Sánchez remained isolated. Andorra too often lacked numbers and quality on the ball in the final third.