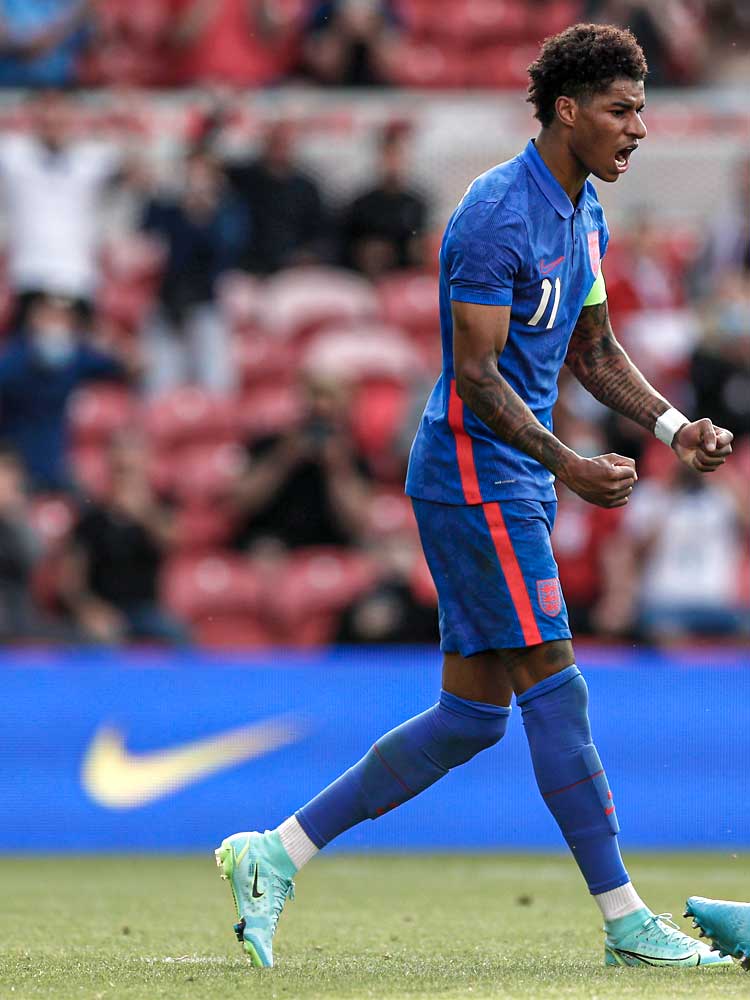 England's preparations for Euro 2020 concluded with a friendly victory over Romania at the Riverside Stadium, after Marcus Rashford scored with a second-half penalty. The influential Jordan Henderson was given a much-needed chance to build his match fitness when he appeared as substitute, and Jack Grealish again impressed, but James Ward-Prowse, among their best performers, missed out on replacing Trent Alexander-Arnold in Gareth Southgate's final squad of 26 when Ben White was instead preferred.  "We had chances to make it more comfortable but so did they," said Southgate. "The first half we did not work hard enough without the ball; we were too stretched and did not press well. After half-time, I thought we improved and it was helpful we went to 4-3-3 later and I have to say it was a good exercise, players needed the minutes and learned a lot from the game. It was good to win."

England were organised by their manager Gareth Southgate into a 4-2-3-1 formation led by Dominic Calvert-Lewin. Their visitors, Romania, defended with a mid-block from their 4-1-4-1.

Jadon Sancho attacked infield from his position as England's right-sided forward, encouraging Ben Godfrey to overlap him from right-back. James Ward-Prowse provided off-the-ball runs from central midfield in an attempt to create increased space for Sancho to receive in, and from alongside him, Kalvin Phillips also occasionally advanced to receive in space in line with Romania's defensive midfielder.  Ward-Prowse also worked to support England's central defenders as they – Ben White did so more regularly than Tyrone Mings – stepped into midfield to start attacks, often by targeting the rotations England offered towards the right.

Towards the left, Marcus Rashford largely remained wide to stretch Romania's defence as he ran in behind, and therefore was often the target of switches of play over that defence from Phillips or Ward-Prowse, depending on which was positioned in the right inside channel. Luke Shaw advanced from left-back but to inside of Rashford, from where he drove infield as Rashford drew their opposing right-back by moving high and wide. On the occasions Rashford moved infield, he rotated with Grealish, England's starting 10, who impressed as he drifted towards the left to combine with others or drive forwards. It was after Grealish combined with Sancho through the left inside channel that Sancho struck the crossbar.

Calvert-Lewin remained advanced, both to occupy Romania's central defenders and to stretch them, when necessary, by moving in behind when England targeted, via rotations. the spaces between wide and central midfielder. Romania's grasp of possession increased after half-time, so England increasingly attacked on the counter, often via Rashford targeting the spaces in behind his opposing full-back, and Calvert-Lewin withdrawing into a deeper position to draw defenders with him and therefore increase the space for Rashford to attack into.

When England reorganised into a 4-3-3, Grealish became their left-sided forward. That he attacked infield meant Shaw overlapping him, and Jude Bellingham attempting to provide support from central midfield. It was that change that won them the penalty from which Rashford, operating from the right, scored the game's only goal; Grealish drew the relevant foul after a combination towards the left.

Grealish's movements regularly took him to alongside Calvert-Lewin, ensuring that Shaw continued to advance and that Bellingham occupied the left inside channel at an earlier stage of their attacks, doing so ahead of the double pivot Phillips and fellow substitute Jordan Henderson temporarily formed. Grealish's movements also helped Calvert-Lewin to move in behind, as he did when he won their second penalty.

Romania were set up in a 4-3-3 formation by their manager Mirel Radoi. Their hosts, England, applied an aggressive press if they were not defending with a mid-block from their 4-4-2.

The visitors' central attacker, Denis Alibec, regularly moved into the inside channels to link play and provide an early passing option beyond England's two defensive midfielders as they sought to attack on the counter. When he remained central, Kalvin Phillips was sufficiently aware to attempt to block the passing lane to him. Supporting runs were made by their wide forwards, and through the centre from two of their three central midfielders; delayed, secondary support also came from Camora as he advanced from left-back – particularly when Alexandru Paun moved infield with the ball.

During their lengthier spells of possession, England pressed with aggression into the wide areas of the pitch, where a wide midfielder and full-back combined to trap the ball towards the touchline, in the knowledge that their two defensive midfielders would cover against passes back infield. Tyrone Mings also prioritised following Alibec, making access to their leading attacker difficult when that to their central midfielders and nearest full-back was also covered.

It was when England defended with their mid-block that one of Romania's central midfielders withdrew to alongside Razvan Miran, their defensive midfielder, in an attempt to encourage quick combinations in midfield before progressing the ball to their front three. A lack of technical quality often undermined their attempts to combine under the pressure England were applying in the centre of the pitch, so they sought to keep the ball there until increased numbers contributed to that pressure and their full-backs could advance to provide an outlet around England's defensive block. It was the time they were required to retain the ball for, however, that meant that they were too often dispossessed before their full-backs could move to where they needed.

Those full-backs therefore started to advance at an earlier stage. Direct passes towards the right were regularly complemented by Deian Sorescu overlapping beyond Andrei Ivan; Nicolae Stanciu also withdrew into deeper territory as Alexandru Cicaldau advanced to join Alibec and Paun in attacking through the centre of the pitch, in turn forcing Marcus Rashford to retreat and defend from deeper areas than he would have liked.

Cicaldau was encouraged to attack as a striker when Paun remained wide on the left and Alibec withdrew into the left inside channel, ultimately creating increased space for Cicaldau to make off-the-ball forward runs. Reverse passes back inside, to between the relevant wide and central English midfielders, increased Romania's grasp of possession and led to England then defending with a 4-1-4-1 or 4-5-1, but the substitutions the hosts made contributed to them only fleetingly threatening in the final third.