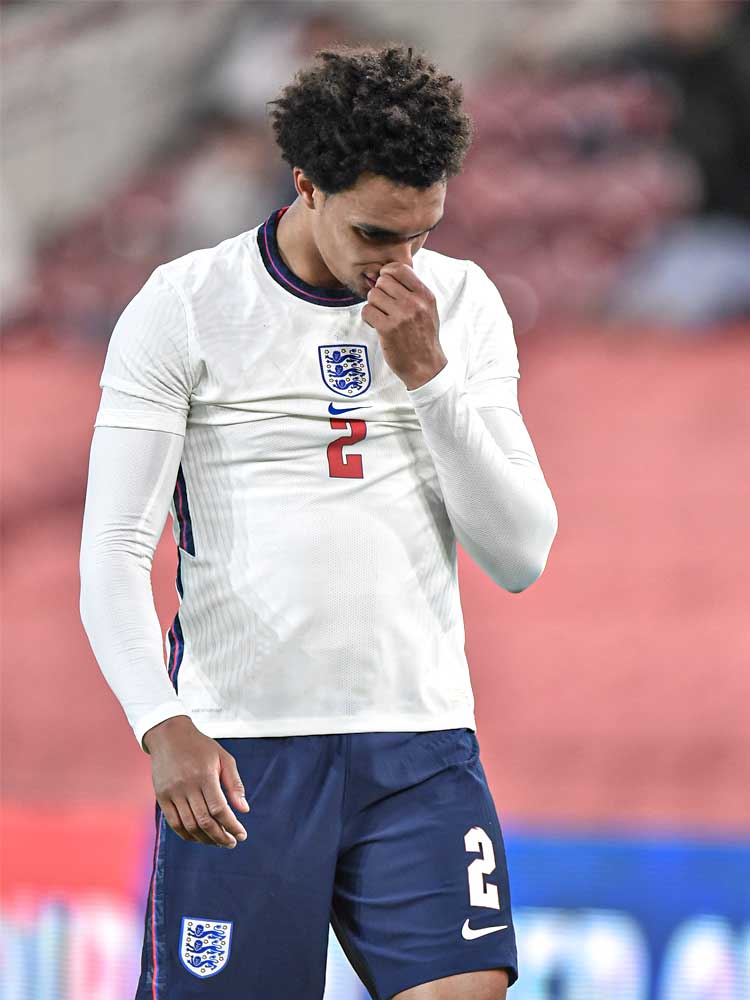 England's preparations for Euro 2020 continued with victory over Austria, but one that was marred by an injury to Trent Alexander-Arnold that could yet rule him out of the entire competition. Bukayo Saka secured victory with his finish early in the second half, before Alexander-Arnold's injury and the fact Gareth Southgate had already used all of his substitutes left England down to 10, and under pressure as Marcel Sabitzer struck the crossbar. "We used the ball well in the first hour or so," the manager said. "We were playing against a very good side. They get in between the lines well. After that we got a bit disjointed and people had cramp."

England were organised by their manager Gareth Southgate into a 4-2-3-1 formation led by Harry Kane. Their visitors, Austria, defended with that same shape.

Bukayo Saka, Jack Grealish and Jesse Lingard formed the three behind him; Saka largely remained wide on the left, but Lingard drifted infield from the right to alongside Grealish – particularly when Kane withdrew into deeper territory towards the left – inviting Trent Alexander-Arnold to advance from right-back. When he did so, Jude Bellingham offered cover from central midfield.

When Austria advanced from their mid-block to press England's attempts to build in deeper territory, it became possible to play directly to Kane, who efficiently secured the ball and linked with those making runs from midfield. Saka joined Lingard in moving infield as he did so; through their rotations, they and Grealish offered an alternative to England's more patient build.

Between them, Konrad Laimer and Marcel Sabitzer pressed Declan Rice and Bellingham, who both had little time and space when receiving from defence, and Christoph Baumgartner pressed Trippier and applied secondary pressure to Rice and Bellingham. Trippier responded by attempting to switch play over those in midfield to Alexander-Arnold, if Jordan Pickford had not already successfully played over or inside Baumgartner.

For all of their ability to play through or over Austria's pressure and to retain possession against their mid-block, England struggled to penetrate through their defence. The movements of Kane, Lingard and Grealish meant that Saka was often the only player posing a threat in behind, and because he was doing so from the left, he was able to offer little more than crosses, which occasionally also applied to Alexander-Arnold from the right.

England took the lead when they broke, having regained the ball when Austria's attempts to attack without width forced England to defend the central areas of the pitch with numbers. Kane's intelligent sideways movements led to that counter, and forward runs from Lingard, Grealish and Saka who, supported by Grealish's run and Lingard's touch away from pressure, struck.

Southgate made several changes, and after he did so, Saka attacked from the right on to his stronger left foot, and Ollie Watkins attacked from the left on to his right. Grealish also made runs into wide territory to support them and to receive in behind, and Dominic Calvert-Lewin, who replaced Kane, remained an advanced threat.

England therefore transitioned into attack by focusing on quick, direct penetrations after making regains, and did so having spent increased time defending deeper against the attacks Austria made through the centre of the pitch. After further changes they finished without a 10, and instead had two attacking central midfielders – Bellingham and James Ward-Prowse – in front of one defensive midfielder. Bellingham and Ward-Prowse supported around Calvert-Lewin's direct runs; Saka and Watkins also supported via off-the-ball runs.

Franco Foda set Austria up into a 4-2-3-1 led by Sasa Kalajdzic. Their hosts, England, defended with a 4-4-2, via Jack Grealish advancing to alongside Harry Kane, and Bukayo Saka and Jesse Lingard.

David Alaba provided their width from his position wide on the left; Christoph Baumgartner, in turn, attacked infield from the right and sought to link with Kalajdzic, the target of direct passes, in front of a narrow midfield three positioned around Jude Bellingham and Declan Rice. Austria attempted to build around England's 4-4-2 and into wider territory; they offered rotations towards the right; towards the left, Alaba and Marco Friedl were considerably more direct in targeting Kalajdzic.

That directness contributed to Kalajdzic attacking through the centre or from the right, and therefore in making runs across goal to attack crosses. Through him doing so, Sabitzer occupied a permanent inside left position, and assisted Alaba in the creation of opportunities to cross – particularly when Friedl remained at left-back. Konrad Laimer gradually supported Kalajdzic's movements by making forward runs, and Baumgartner also adjusted by remaining wide on the right, owing to Stefan Lainer remaining withdrawn to contribute to attempts to build around Grealish and Kane.

England's front two sought to block access to Austria's deepest-lying midfielder when a high press was being applied, so Austria targeted playing into their full-backs, who then sent possession back infield, or – amid Lingard and Saka pressing those full-backs – their back four targeted those making forward runs off of Kalajdzic. Alaba and Baumgartner later switched wings to focus on operating through the inside channels on to their stronger foot and to combine with Sabitzer and the more advanced Kalajdzic. Sabitzer also withdrew to between Bellingham and Rice to link defence to midfield, so Lainer and Friedl increasingly advanced to provide their attacking width, and did so in the knowledge that they were covered by a double pivot.

Their evolved attacking approach made England's defensive block both deeper and more compact, increasing England's cover of the inside channels. Sabitzer proved Austria's most creative player; he also struck the crossbar, despite England defending with numbers around him. With their full-backs continuing to play with width and to provide crosses, and Sabitzer's efforts, England – reduced to 10 after Trent Alexander-Arnold's injury – were tested to the point of Ben White being required to clear off the line, but an equalising goal eluded Austria.