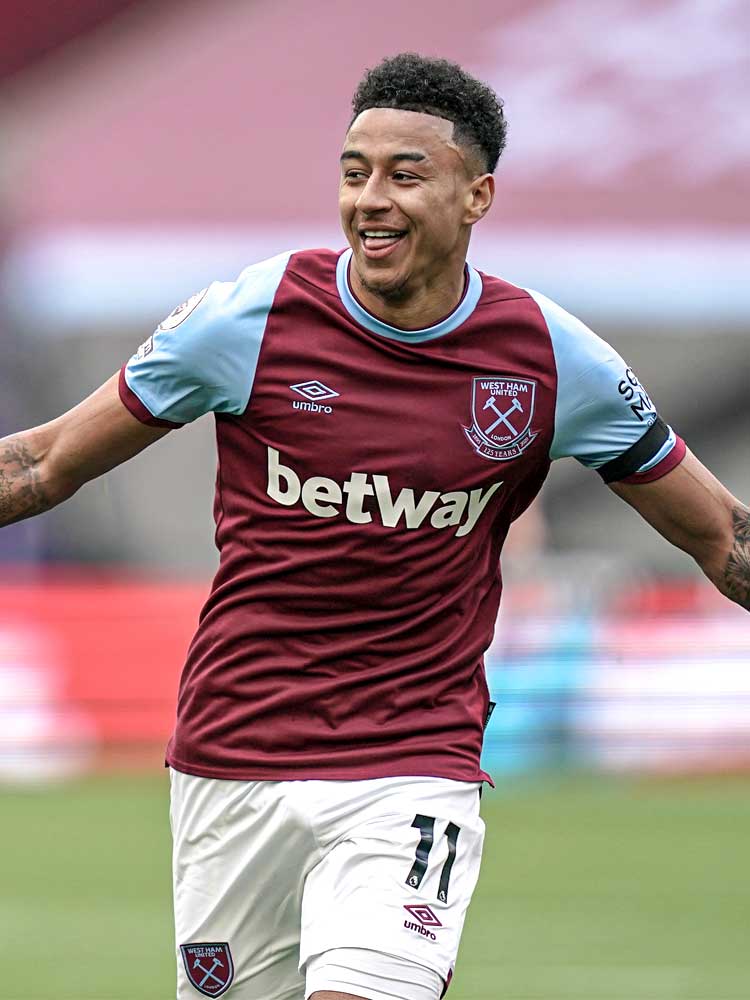 Profile
A loan move to West Ham and an unlikely partnership with David Moyes has been the catalyst for Jesse Lingard’s career being sparked back into life. Bruno Fernandes’ arrival at Old Trafford and the emergence of Mason Greenwood meant that under Ole Gunnar Solskjaer opportunities for Lingard at boyhood club Manchester United became rare.

In London, however, Lingard has been a revelation in a West Ham side that has had one of the club’s best ever Premier League campaigns. It took Lingard just 10 West Ham games following his January move to reach his highest-ever top-flight goal tally, with nine goals. “He has been very good,” said Moyes. “We want him to be positive and show exactly what he can do on the pitch. He has helped us, and he has been a very good acquisition for the squad.”

Tactical analysis
Lingard is a versatile attacking midfielder comfortable in any attacking midfield position. Regardless of whether he is selected wide, as a number 10, as an attacking central midfielder or as one of two 10s behind a lone striker, he is at his best in central spaces between the lines. His movement – and more specifically the timing of his movements and the awareness he shows in making runs – is a particular strength.

He often makes sharp movements from a deeper position into a more advanced slot, looking to receive a square pass on the run and therefore primed to quickly move play forwards. He will generally wait until his teammate has drawn opponents in to make this movement, aiming to take advantage of the space the opponents have left by closing down the player in possession. These movements help his team to progress through defensive blocks at speed.

That positive, front-foot mentality is a consistent feature of his play. After receiving the ball, he likes to manoeuvre into a forward-facing position as quickly as possible – usually via taking his first touch on the half-turn, by rolling his opponent, by allowing the ball to travel across his body or by turning before he has even taken a touch. Nimble footwork and impressive agility mean Lingard is able to do this effectively and consistently.

His mobility is also a big strength of his when he has the ball at his feet, as he can carry play forwards at pace and quickly change direction or decelerate to avoid pressure. He also shows good awareness of his surroundings and vision when it comes to timing when he releases the ball. He often plays a pass at a moment when he appears at risk of overrunning the ball, but there is thought behind his actions; Lingard does this to draw opponents towards the ball and free up a teammate who he can pick out. He often follows doing so by making a further forward run and looking for a return pass.

This all makes Lingard particularly effective at breaking lines and doing so at speed. He is effective on the counter-attack and he combines well with other players who thrive when playing high-tempo football. When he is instead attempting to play at a slower tempo – in a team that likes to take their time on the ball and enjoy longer periods of possession, for example – or with less mobile teammates, he is less comfortable, and his passing becomes both less accurate and less effective.

Though he is known more as a player who creates chances or plays the pass before the assist, he also provides plenty of goal threat, as he has proved on loan at West Ham under Moyes. His forward runs often take him beyond the opposition defence and into goal-scoring positions, but he usually has a shot from the pass that follows a ball forwards (above), rather than being played directly in on goal himself.

He is proactive in his defensive work and he presses with energy, and he is intelligent enough to read his opponent’s intentions. The work he puts in and his anticipation lead to an impressive number of recoveries through interceptions. A relative lack of upper body strength makes him less effective when directly challenging opponents in individual duels, but he makes up for that with intelligent movement and reading of the game.

Role at West Ham
Lingard has thrived as the number 10 in Moyes’ 4-2-3-1 at West Ham, providing consistent threat on the opposition’s goal and plenty of creative nous too; two aspects of his game that had been noticeable in their absence across the 2018/19 and 2019/20 campaigns at Manchester United .

He works extremely hard out of possession to both try and win the ball back and to help keep the team’s rigid 4-4-2 defensive shape, but it is at attacking transitions that he springs to life. He is perfect for Moyes’ hugely effective counter-attacking game, able to either carry the ball forwards at pace himself (above) or make space for others with a direct forward sprint to stretch the back-tracking opposition.

Given the amount of work he does for West Ham and the ground he covers, it is surprisingly rare how often he leaves the zone of the pitch in which you’d expect to find a number 10. He only infrequently drops deep to collect the ball during the build-up phase and will just as infrequently break beyond the centre-forward. Lots of West Ham’s play involves getting into wide positions and putting balls into the middle for the likes of Michail Antonio or Tomas Soucek to attack, while the wide forward on the opposite flank will also attack the box. Lingard, however, will instead take up a position outside the area to receive a cut-back or pick the ball up from any half-clearances (above). This approach brought him plenty of success from an early stage at West Ham.

Lingard’s finishing has rarely been an aspect of his game that is widely praised, but he has shown flashes of brilliance in West Ham colours, and particularly impressive has been his ability to pick his spot when shooting from distance and find the corner of the net in style.

A player who had come to be thought of as rather unfashionable in that he was merely hard-working and functional without much in the way of end product, has reignited his career as a genuinely exciting, creative and extremely effective attacking midfielder at West Ham. Given the chance to play regularly, Lingard has shown he has a good few more years left in him yet.