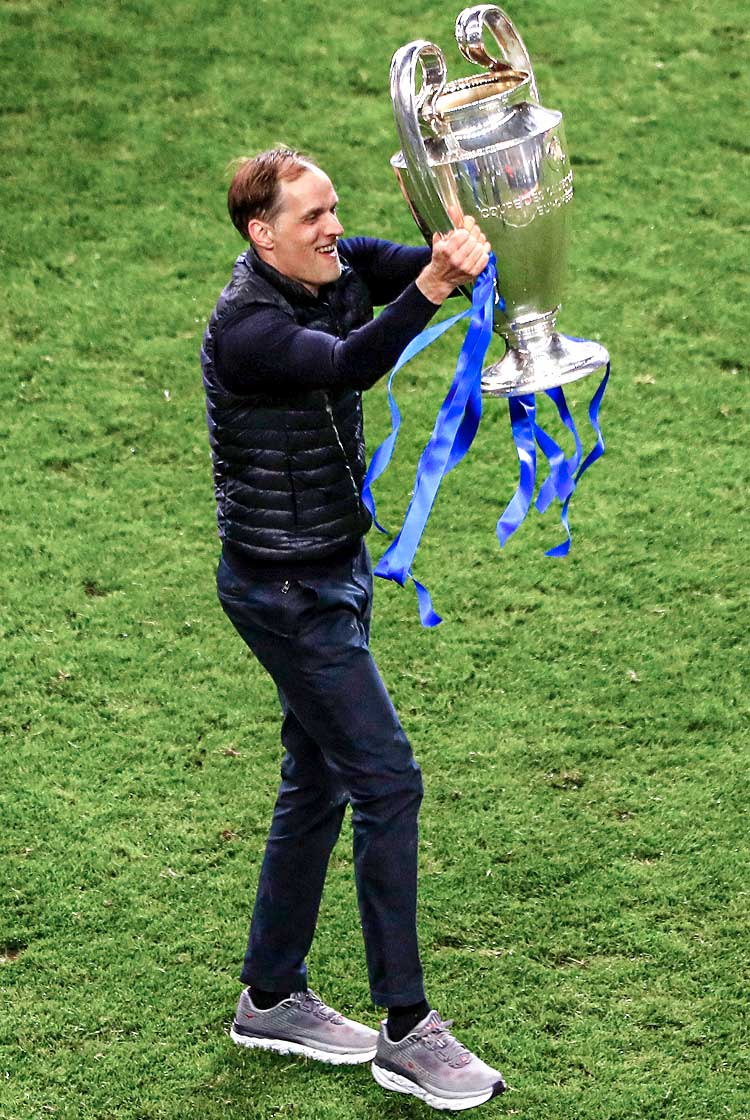 In a packed year of football, our search for the coaching performance of 2021 uncovered a crowded field. With the delayed Euro 2020 played in the summer of 2021, Manchester City storming to another Premier League title, shock winners in both the Champions League and the FA Cup, and surprises in the race for Europa League qualification – with Leicester and West Ham finishing above Tottenham and Arsenal – there were plenty of impressive performances to choose from.

We have had a thorough look back through 2021 and picked out the eight coaching performances that stood out most. In chronological order, here they are…

Liverpool suffered such awful injury problems in 2020/21 that they actually ended up breaking records for the number of home defeats they suffered. It shouldn’t, in hindsight, have been much of a surprise that Manchester City were among the teams to beat Jürgen Klopp’s side, but the manner – and importance – of this victory makes it worthy of a spot in our list.

City pressed Liverpool aggressively, and even with midfielders Jordan Henderson and Fabinho at centre-back, the home side could not contend with the high-intensity work of Phil Foden and Bernardo Silva, who spent much of the game up front for City (below). Wide midfielders Riyad Mahrez and Raheem Sterling pressed the outside shoulders of Liverpool’s centre-backs, forcing play inside and blocking access to their full-backs. When they won the ball, City attacked with a bold 3-2-5 to overload Liverpool’s four-man defence.

The results were striking, with City recovering from a first-half missed penalty to put four past the reigning champions and strengthen their grip on the Premier League trophy. They did not give up their lead at the top of the table and went on to win the title.

Even with Manchester City 14 points clear at the top of the Premier League in early April, facing a Champions League quarter final second leg against Borussia Dortmund in a few days’ time, and playing an ever-so-slightly weakened team, no visiting side to the Etihad Stadium should expect to come away with a result. This is especially true for a team in their first season back in the Premier League since promotion from the Championship, and even more so for one forced to play the second half with only 10 men.

Marcelo Bielsa’s Leeds, however, sowed a seed of doubt in City’s title aspirations when they went ahead on the counter through Stuart Dallas, and then recovered from Liam Cooper’s sending off and Ferran Torres’ equaliser to nick a winner in second-half injury time. Bielsa’s side aren’t renowned for their defensive resilience, but a man down at the champions elect, they were forced back to the edge of their own area, and they dug in. They played the second period without a striker, set up in a 4-1-4 formation, and conceded two thirds of the pitch to their opponents. Yet they struck late on – again through Dallas – thanks to a direct ball forward to exploit the space in behind City’s high line, and secured a memorable victory.

Thomas Tuchel’s arrival in January transformed Chelsea's season dramatically, as they stormed to Champions League glory (more on that below), a top-four finish and the FA Cup final. The success they had in the second half of the season was largely based on them overcoming the odds in difficult times, in the the FA Cup final against Leicester, the tables were turned: they went into the game as the form team and huge favourites, and fell to a shock defeat.

Brendan Rodgers set his Leicester side up in a 3-4-1-2 formation that mirrored Chelsea’s 3-4-3 out wide. Wing-backs Timothy Castagne and Luke Thomas did a good job of keeping opposite numbers César Azpilicueta and Marcos Alonso quiet, while Youri Tielemans played a key role in central midfield. Tuchel played Reece James as the right-sided centre-back in Chelsea’s back three to add some pace up against Jamie Vardy, who stayed highest for Leicester and threatened the space in behind (below). However, when Tielemans got on the ball in the right inside channel, he played balls over the top for Vardy to chase in behind Chelsea's left centre-back Antonio Rüdiger, and this was where Leicester posed their greatest threat. Tielemans proved the difference on the day, with his long-range strike separating the teams, and Chelsea were unable to break down Leicester’s 5-4-1 block in the game’s late stages.

With victory in a cagey Champions League final, Thomas Tuchel completed a remarkable first six months at Chelsea. A top-four finish had already been secured despite taking over when Chelsea were 10th in the table, and Tuchel and Chelsea then turned their attentions to denying Premier League champions Manchester City their first ever Champions League trophy.

He attempted to do so with a familiar looking team, but brought Kai Havertz in to play in a fluid front three alongside Timo Werner and Mason Mount. Those three rotated positions constantly, and with Guardiola choosing to play without a recognised defensive midfielder, Chelsea’s attackers picked up the ball in threatening positions thanks to their co-ordinated movements.

The wing-backs were encouraged to attack wherever possible to create a five-man attacking line, with the aim of stretching City’s four-man defence across the pitch. This tactic proved crucial, with Ben Chilwell’s advanced position on the left and Werner’s run from right to left across the front line pulling the City defence across, which created space for Havertz to run through the middle and score the only goal of the final. From then on, Chelsea’s game management was exceptional, and they crowded the space between the lines, restricting the usually free-scoring City to half-chances and an expected goals total of just 0.89.

Having lined England up with a back four in each of their three group stage games at Euro 2020, Southgate went with what appeared to be a more conservative 3-4-3 for a tricky looking tie against Hansi Flick’s Germany in the last 16. Southgate played with two defensive midfielders ahead of a back three of Kyle Walker, John Stones and Harry Maguire. Walker – a right-back playing at right centre-back – was encouraged to push forward and offer support for wing-back Kieran Trippier in an attempt to drag Germany’s midfield over to that side of the pitch.

Once England had moved play over to their right, they then looked to quickly move the ball into the left half-space. Left-sided forward Raheem Sterling proved effective at moving into this space to receive (below), and Jack Grealish received a pass in that space in the build-up to England’s opening goal.

Luke Shaw was also told to play high up on the left flank, and it was his aggressive approach that led to him winning the ball back before Harry Kane scored England’s second goal. Southgate got his tactics just right to record an historic win.

Robert Mancini's glory-bound Italy side continued their impressive march through the Euro 2020 knockout stages with their best performance of the competition – a convincing win over Belgium, the team then ranked number one in the world. At both ends of the pitch, Italy were the better side on the day.

Italy overloaded the left side with Leonardo Spinazzola and Marco Verratti joining Lorenzo Insigne out wide, and that often led to Belgium's double pivot moving across and space being created elsewhere. Federico Chiesa held Italy's width on the right, while Nicolò Barella made forward runs through the inside channel on that side, often doing so after Belgium had been dragged across to deal with the overload on Italy's left. Barella scored Italy's first having taken the chance to get forward, before Insigne scored their second after moving infield following one of Spinazzola's many overlapping runs.

Despite going ahead, Italy pressed high when they had the opportunity to do so (below) and Belgium struggled to get out. When they did, Italy dropped back into a typically resolute 4-5-1 block, which left little space for Belgium's creative players to operate in. By the game's late stages, Mancini was happy for his team to show little ambition with the ball, and they sat back and dug in. Belgium's only goal of the game came from the penalty spot, and Italy held on to progress to the semi finals.

Erik ten Hag's rebuilt Ajax side hinted that they might be making another surprising run through the Champions League's latter rounds with their group stage form in the early part of 2021/22. Their 4-0 rout of Borussia Dortmund was the pick of their six wins from six group stage games.

Ajax dominated possession and pressed ferociously, and Dortmund found it almost impossible to build out from the back. There was an air of Guardiola's Manchester City about Ajax in possession, with their wingers staying high and wide, and their two number eights, Ryan Gravenberch and Steven Berghuis, pushing forward through the inside channels and looking to get on the ball in the half-spaces. Dortmund's single pivot, Axel Witsel, was constantly overloaded and Gravenberch and Berghuis were consistently able to find space to receive passes. The reborn Sébastien Haller occupied Dortmund's two centre-backs, and Ajax pushed their full-backs up to create overloads out wide. Marco Rose's Dortmund simply could not cope.

David Moyes' West Ham produced some hugely impressive performances in the first half of 2021/22, including wins over Manchester United, Chelsea, Tottenham, Leicester and Everton, but it was their October victory over Liverpool that was arguably the most impressive of the lot.

Set up in a deep block, Moyes' men frustrated Liverpool, and looked to hit their opponents on the counter, with Michail Antonio moving out to the left to drag Joël Matip out of position and create space through the middle for Pablo Fornals or Jarrod Bowen to run through (below). The deeper West Ham sat back, though, the more difficult they found it to keep the ball on the break and put together effective counter-attacks. However, as the game wore on, Moyes encouraged his West Ham side to take a more assertive approach and, in doing so, they forced Liverpool back. The game opened up as both sides looked for a second goal in the second half, and West Ham's commitment to throwing men forward on the counter proved decisive.