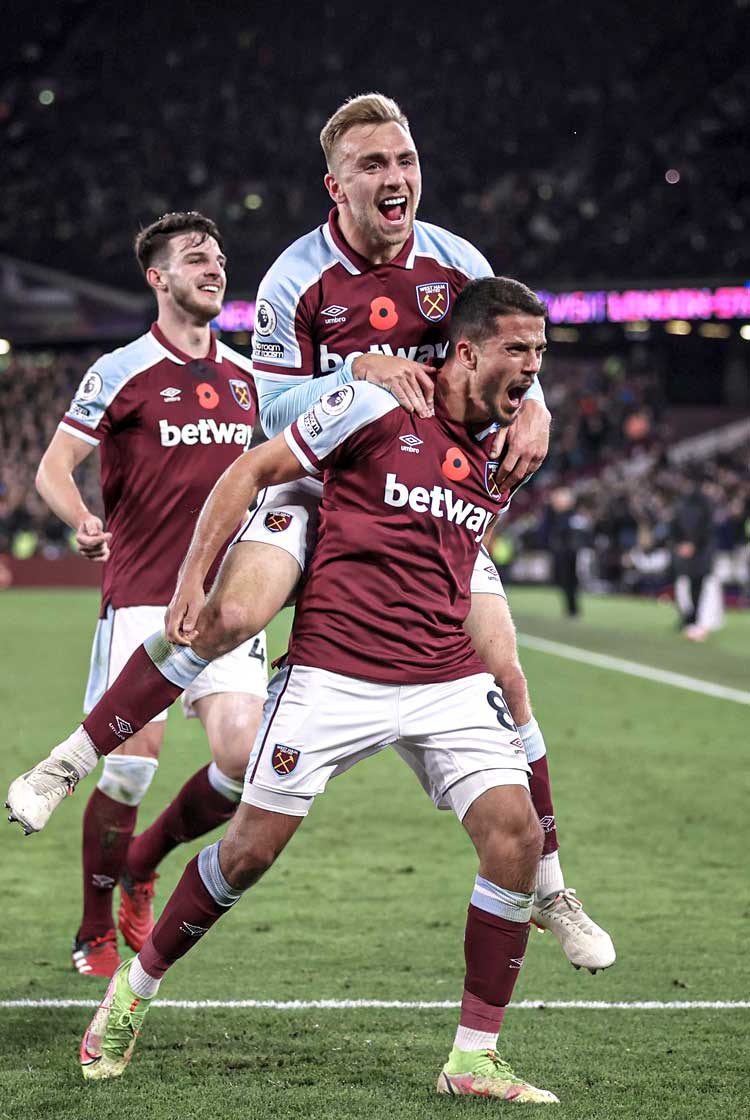 West Ham extended their impressive run of form and dented Liverpool's title hopes with a hard-fought win at the London Stadium. David Moyes' side went ahead following an error from Alisson at a corner, and the deep block they then employed kept their opponents at bay – in open play, at least. Trent Alexander-Arnold struck from a free-kick just before half-time to level the scores, but Jürgen Klopp then urged his team forward in search of a winner and the game opened up. West Ham looked more and more threatening with space to counter-attack into, and they scored two more goals – through Pablo Fornals and Kurt Zouma – to secure a win that puts them third in the Premier League table, just above Liverpool. “We are still growing the seeds a little bit, but I think we in the top three on merit,” said Moyes. “I wanted to challenge [for] the top four.”

Isolated counter-attacks
Setting up in a deep block in the first half, West Ham focused on quick counter-attacks to break forward. Michail Antonio curved his runs outwards, predominantly moving to the left and pulling Joël Matip out with him. Support then came from West Ham’s two wide players, with number 10 Pablo Fornals joining, too. The hosts’ defensive structure was solid, but because their defence was so deep and their wide midfielders had long distances to travel to reach Antonio, they struggled to retain the ball high up the pitch. The consequence of staying compact for so long to frustrate Liverpool’s attacking play was that the distances to break forward were too big.

Threat down the left in the first half
When West Ham were able to sustain attacks in the first half, Fornals moved across to the left, with left-back Aaron Cresswell moving forward in support. These movements allowed Saïd Benrahma to move inside. Tomas Soucek then pushed forwards and attacked through the middle in the space that Fornals had vacated, joining Jarrod Bowen and Antonio in the centre. This was particularly effective when one of Liverpool’s centre-backs had been dragged out by Fornals’ movement. Crosses from an overlapping Cresswell or Benrahma in a narrower position were then used to target the players in the centre.

Developing the left side in the second half
West Ham were more assertive in the second period, both with the pressure they applied in midfield and in the numbers they committed to attack. Their left side continued to be where they focused their attacks, with Declan Rice moving across from the double pivot. This allowed Cresswell to push forward earlier, remain higher for longe and stay closer to Benrahma. Cresswell’s position dragged Jordan Henderson out wide to support right-back Trent Alexander-Arnold, which in turn allowed Fornals to stay central, where he found space beyond Liverpool’s midfield unit along with Bowen. Mo Salah started to work back to track Cresswell's runs, but although this limited access into Fornals as Henderson remained central, Liverpool’s attacking transitions were far weaker with Salah now defending deeper, and Rice providing extra cover on this side.

The game opening up favoured West Ham
The second half was far more end-to-end, which meant the game was more open. But this also left West Ham’s wide midfielders closer to Antonio and therefore in a better position to support their counter-attacks. Fornals positioned himself slightly deeper as a result – supporting Rice and Soucek in midfield – and connected play into the front line. Antonio continued to bend his runs away from the centre, dragging Liverpool’s centre-backs out of position and creating space for Bowen and Benrahma to run inside, or for Fornals to drive through. As Liverpool also attempted to push numbers forward to win the game, West Ham created more counter-attacking opportunities. Antonio stayed central and ran between Liverpool’s two centre-backs to threaten in behind.

Facing an extremely compact West Ham block, Liverpool found it difficult to consistently access players between the lines. Their wide players drove inside with the ball, but often just ran into a crowd of West Ham players. Liverpool’s best route forwards came in the wide areas, and it was down their left side that they made the best progress. Andy Robertson attacked much higher than Trent Alexander-Arnold, with Sadio Mané moving inside earlier than Salah on the right.

Rotations on the right struggled
Liverpool’s left side remained consistent throughout, with Robertson high and wide, Mané inside, and Alex Oxlade-Chamberlain supporting. However, on the right, the visitors mixed things up – Alexander-Arnold moved infield, Henderson widened and Salah drifted inside. When the ball was on the left, Henderson pushed forward, attacking the penalty area from midfield, and Salah held the width, with Alexander-Arnold tucked inside. The right-back struggled to have an impact on the game from the crowded centre of the pitch. He might have had more impact from a wide position in the first half, as Robertson did on the left.

Alexander-Arnold’s growing role
From his withdrawn position, Alexander-Arnold showcased his accurate passing to help Liverpool penetrate around and over West Ham’s back line as the match developed. With the game becoming more stretched in the second half, he could receive in his narrowed position, with more time to pick out a forward pass. Mané continued to move inside from the left, sometimes running past centre-forward Diogo Jota, and those two players occupied both of West Ham’s centre-backs for longer. This helped free up Robertson, who continued to move high on the left side and provide another target for Alexander-Arnold.

Late focus on the central areas
As Liverpool chased the game late on, they increased their central presence. Divock Origi gave a stronger and more consistent presence up against West Ham’s centre-backs. Liverpool also had more variety in their movements to attack between the lines, with many players rotating in an attempt to pull West Ham’s double pivot out of shape. However, the home side converted into a low block, totally focused on defending as opposed to counter-attacking from deep, with Moyes replacing his wide midfielders with another set of full-backs. This meant Liverpool also found it more difficult to progress around and build in the wider areas. They were unable to draw level after Origi had pulled one goal back.