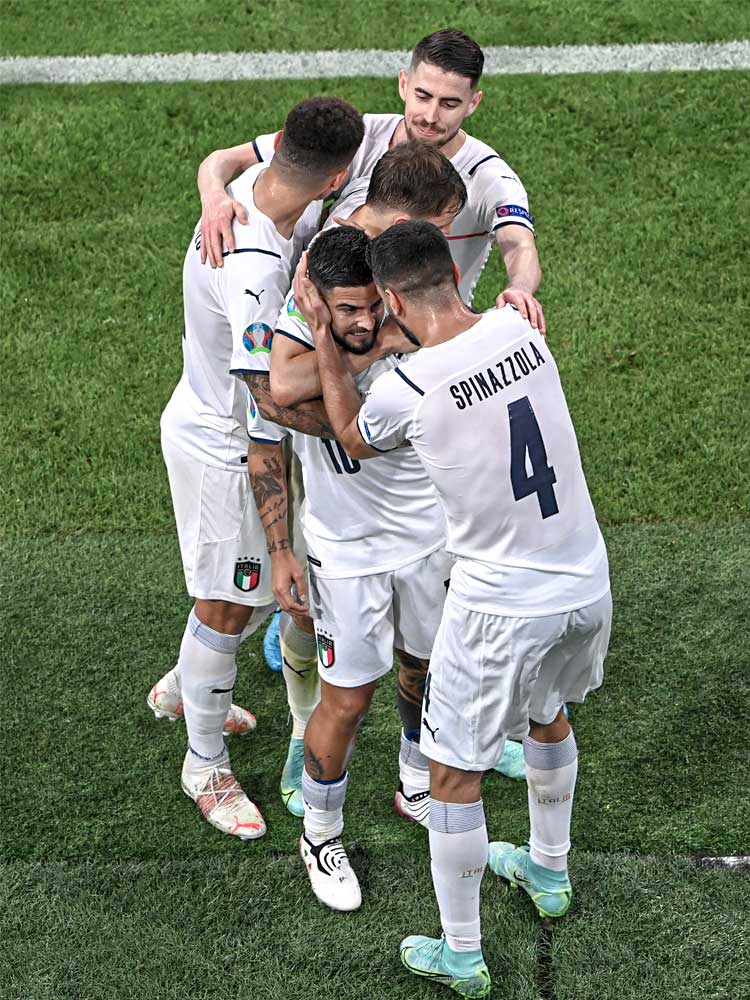 Italy will meet Spain in the semi finals of Euro 2020 after overcoming their greatest test so far to eliminate Belgium. Extending their fine run to 13 consecutive victories, and 32 matches without defeat, they took a commanding lead via finishes from Nicolò Barella and Lorenzo Insigne, whose will be remembered as one of the competition's best. Romelu Lukaku's penalty shortly before half-time reduced that lead, but the Azzurri then convincingly did what they perhaps still do best – defend. Only the cruel Achilles injury suffered by Leonardo Spinazzola, which will rule him out against both Spain and of the final should they progress that far, undermined their cause for celebration. "The team has progressed game in, game out," said their manager Roberto Mancini. "Even when there have been tricky matches, the team has always got better – and there is still room for improvement." His opposite number, Roberto Martínez, said: "(The players) did everything they could to get us as far as we can. Now is the time to analyse and to assess. But, at the moment, the feelings of disappointment and sadness, unfortunately, is what is in my head now."

Roberto Martínez set Belgium up into a 3-4-3 formation in which Jérémy Doku replaced the injured Eden Hazard. Their opponents, Italy, defended with a 4-1-4-1.

Thomas Meunier and Thorgan Hazard provided Belgium's attacking width from wing-back; Romelu Lukaku sought to threaten in behind Italy's two central defenders, Doku remained wide on the left, and Kevin De Bruyne had the freedom to drift from his position as their right-sided forward. Behind them, Youri Tielemans and Axel Witsel formed a double pivot either side of Ciro Immobile, and Belgium's back three worked to create numerous angles into them so that if Italy were defending with a mid-block they could progress beyond the first line of Italy's structure without being forced wide. On the occasions Italy applied a higher press from a 4-3-3, direct balls in behind for Lukaku proved more effective.

It was during counters that Belgium more effectively progressed possession, and not least because of the numbers Italy were otherwise forcing them to defend with. De Bruyne's willingness to defend from a central attacking position provided a valuable outlet against Italy's counter pressure before he drove forwards or released Lukaku towards the right, but they often struggled to penetrate forwards when Italy defended with a low block – sometimes even doing so with all 11 players – and therefore relied on Doku's pace to win the penalty from which Lukaku scored.

Rotations were used towards the left so that Doku could receive in deeper territory and therefore with increased space to attack into. Hazard moved infield and into the left inside channel, on to his stronger right foot, and Doku's speed provided a consistent threat that contributed to Belgium building with width before attempting cut-backs and crosses; Lukaku almost scored from one low cross from De Bruyne.

The introductions of Dries Mertens and Nacer Chadli meant De Bruyne adopting a deeper position and Hazard moving to feature from the right, and almost brought an equalising goal when Lukaku narrowly missed reaching a cross from the left. An injury to Chadli then led to him being replaced by Dennis Praet, and Belgium adopting a 4-2-3-1 that featured De Bruyne as their 10, behind Lukaku, and Mertens drifting infield from the right to often operate as a second 10.

Italy, in turn, adopted a particularly deep defensive structure in an attempt to retain their lead. With Hazard providing Belgium's width on the right, and Doku from the left if not attacking infield, Italy not only defended with numbers but prioritised defending the inside left channel and often doubled up on Doku and De Bruyne, the latter when he received possession in midfield. Roberto Mancini's team ultimately succeeded, and partly because of the extent to which they disrupted play during stoppage time.

Italy were organised by their manager Roberto Mancini into a 4-3-3 formation that featured Jorginho at the base of midfield. Their opponents, Belgium, defended with a 5-2-3.

Belgium's narrow front three regularly worked to cover Jorginho so Italy initially built around or over that front three via passes into wide territory. Federico Chiesa retained Italy's width towards the right; from the left, Lorenzo Insigne drifted infield to encourage Leonardo Spinazzola to overlap from left-back. With Marco Verratti dropping through the left inside channel to briefly form a double pivot with Jorginho, Nicolò Barella moved higher and wider and connected effectively with the three defenders behind him.

There were also occasions Verratti moved wide of Belgium's two central midfielders, similarly to Barella, to provide a further option for combinations with Spinazzola and Insigne against Belgium's back five, who so regularly outnumbered Ciro Immobile with three central defenders. It was towards the left that Italy offered greater potential, and partly because of Insigne's willingness to attack infield and move closer to Immobile in an attempt to draw one of those central defenders out of position, in turn increasing the space around Spinazzola when he attacked Thomas Meunier one-on-one.

Barella's quick feet – he and Chiesa were also proving a promising combination – when he pounced on a poor pass out of Belgium's penalty area before driving low across goal gave Italy the lead. They then continued to threaten after regains in midfield, after which passes were played over or beyond Meunier, and doubled that lead when Insigne superbly bent into the far corner after receiving infield.

Italy came under increased pressure, contributing to their back four being forced to defend from deeper territory, so in their attempts to regain momentum Insigne and Chiesa adopted wider positions. Their three central midfielders therefore prioritised playing balls in behind and through the inside channels, where Chiesa's pace and Insigne's willingness to receive to feet and then play in behind to a teammate making a forward run offered potential.

The ability of those three central midfielders to regain and secure possession became increasingly important. Jorginho was again impressive from the base of midfield, and Verratti's movements to form a double pivot or to further towards the left contributed to lengthier periods of possession that forced Belgium to recover their defensive positions and undermined the attacking momentum they had built.

Belgium changing shape, and Mancini making numerous substitutions, contributed to an increasingly transitional affair. Italy defended from deeper territory and targeted Andrea Belotti via direct passes. When they then withdrew all outfielders into their defensive half, their ability to counter barely existed; runs in behind in support of Belotti were absent.