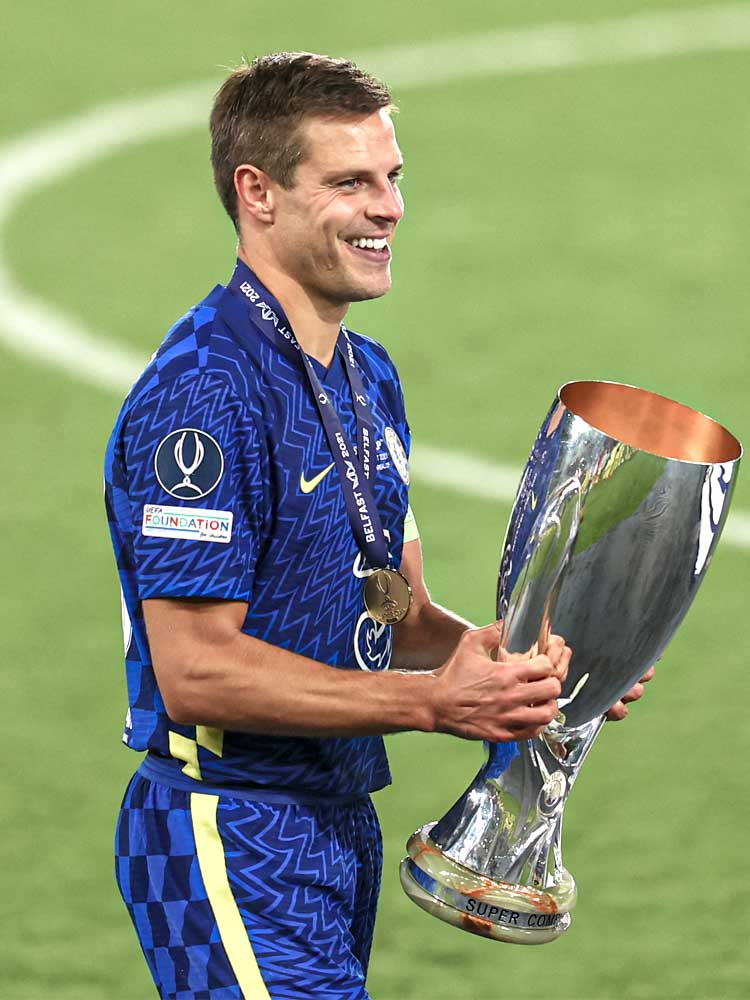 European champions Chelsea lifted the Super Cup for a second time after beating Villarreal 6-5 on penalties after extra time at Belfast's Windsor Park. Hakim Ziyech scored their first goal of the new season midway through the first half before suffering what appeared a serious shoulder injury and requiring oxygen on the stroke of half-time, but Gerard Moreno's finish midway through the second forced extra time. Villarreal beat Manchester United on penalties to win the Europa League, but after the £71m Kepa Arrizabalaga replaced Édouard Mendy just before the start of their shootout, he rewarded Thomas Tuchel's faith to save from Raúl Albiol and secure victory. "Kepa had the best percentage at saving penalties," Tuchel said. "The analysis guys and the goalkeeper coaches showed me the data, then we spoke with the players that this (substitution) could happen when we play knockout games. Since then they have known." Unai Emery clashed with Tuchel at half-time, and the Villarreal manager said: "You cannot blame the players for anything because they've made a fantastic effort."

Chelsea were organised by their manager Thomas Tuchel into a 3-4-2-1 formation led by the front three of Timo Werner, Hakim Ziyech and Kai Havertz. Their opponents, Villarreal, defended with a 4-4-2.

Their wing-backs Callum Hudson-Odoi and Marcos Alonso provided their attacking width, and sought to penetrate in behind by making frequent off-the-ball runs, particularly when doing so complemented one of Chelsea's front three withdrawing into deeper territory. With Villarreal's wide midfielders regularly tracking their opposing wing-backs' high positioning, they often defended with a back five, and sometimes six.

Chelsea required patience when they built possession, given Villarreal's front two worked to provide effective cover against central access. It often required the willingness of their front three to withdraw, tempting a defender to follow them, for them to penetrate in behind; Ziyech and Havertz did so through the inside channels and often timed doing so with Werner advancing and with Alonso and Hudson-Odoi supporting from wide.

It was a curved run in behind from Havertz that created their goal, when he pursued a superb through ball from Alonso before crossing low, towards Havertz, at the far post. Early crosses were a consistent feature of Chelsea's attacks, even against Villarreal's low block, owing to their desire to capitalise on the occasions they had progressed in behind their opponents' compact shape. They, similarly, benefitted when Villarreal's press struggled to cover the distance between full-back and wide midfielder – to the extent through balls took them into space. When an injury to Ziyech meant he was replaced by Christian Pulisic, it became mostly Havertz who withdrew into midfield from attack, and he largely did so through the left inside channel.

Villarreal's defensive approach also soon changed, via Alberto Moreno advancing to alongside their two strikers to contribute to a higher press against Chelsea's back three; their central midfielders then took N'Golo Kanté and Mateo Kovacic; Chelsea, in turn, sought to build via direct passes over their opponents, mostly into wider territory and into their full-backs. The spaces within Villarreal's block led to an increased number of transitional moments, when the pace of Werner and Pulisic and the support offered by Havertz and their wing-backs, particularly after possession had been regained in central midfield, led them forwards.

When Tuchel made several changes, Chelsea attacked without a recognised striker, and instead with Havertz, Pulisic and Mason Mount as a narrow front three positioned between the lines. They had increased spaces to attack into, but struggled to create goalscoring chances. When Villarreal again defended with a lower block, Chelsea had numerous shorter passing options but posed too little threat in behind – even when a run was made that drew a defender out of position – so they only threatened after short passing combinations.

During extra time, when they instead prioritised wider passing combinations, they forced Villarreal into defending from deeper territory, but the numbers with which they did so limited Chelsea's attacking potential. They most impressed when their front three all moved towards the same side of the pitch to offer options around the ball; they were particularly promising when doing so towards the right, after Jorginho played passes from central midfield and into those in the inside channel.

Unai Emery set Villarreal up into a deep-lying, counter-attacking 4-4-2. Their opponents, Chelsea, defended with a 5-2-3, and mostly a mid-block.

Villarreal's counters were most commonly started by their two central midfielders, who regularly targeted their front two. Their opposite numbers – N'Golo Kanté particularly – were regardless very effective at covering against their attempts to do so. On the rare occasions they proved capable of progressing possession they evolved into a 4-2-3-1 via Gerard Moreno withdrawing from alongside Boulaye Dia to between the lines.

On the occasions they bypassed midfield and accessed their front two they succeeded in avoiding Kanté and Mateo Kovacic. Gerard Moreno, again, withdrew into deeper territory, and Boulaye Dia offered penetrative movements beyond Chelsea's three central defenders, giving Villarreal a more effective method of breaking, particularly if one or both of their wider midfielders could support Dia's movements having not retreated to defend.

The width with which Villarreal's full-backs and wide midfielders positioned themselves gave them a route around Chelsea's front three, and was complemented by Étienne Capoue and Manu Trigueros becoming options between the lines. Chelsea's two central midfielders pushed forwards to press them, but doing so created the potential for diagonal passes to be played back infield, often to Gerard Moreno, whose movements contributed to Kurt Zouma advancing to press.

When Villarreal switched play across their back four they proved more effective at progressing possession. Their full-backs drove forwards from narrower territory, and did so in the knowledge that their width was instead being provided by their wide midfielders and that Gerard Moreno and Dia would operate as a front two, between Chelsea's back three. That evolved again when Juan Foyth overlapped on the right, encouraging Yéremi Pino infield, to where he was supported by the closest central midfielder – most commonly Trigueros – and possession moved through the inside channel before their attempts to feed their front two.

Gerard Moreno's movements into deeper territory continued to contribute to their efforts to build through the centre of the pitch, to overload Chelsea's two central midfielders, and to access their wide midfielders. Chelsea's mid-block therefore became significantly narrower – their front three, who prioritised preventing central access, particularly. Doing so undermined one of Villarreal's attacking patterns, but also meant them having increased possession; they continued to offer potential towards the right, but with only one striker attacking against Chelsea's back three they struggled from in front of goal.

That Chelsea were forced to defend for lengthier periods meant Villarreal being able to commit increased numbers forwards; they started to offer similar rotations towards the left to those seen towards the right, in turn encouraging Gerard Moreno to adopt a more advanced position and to combine with Dia, as he did before scoring their equalising goal. It was then that they again prioritised attacking on the counter.

They attempted to recreate that same wider build-up during extra time. For all of their success in progressing into the attacking half, however, the numbers and depth with which Chelsea defended undermined their ability to create goalscoring chances.