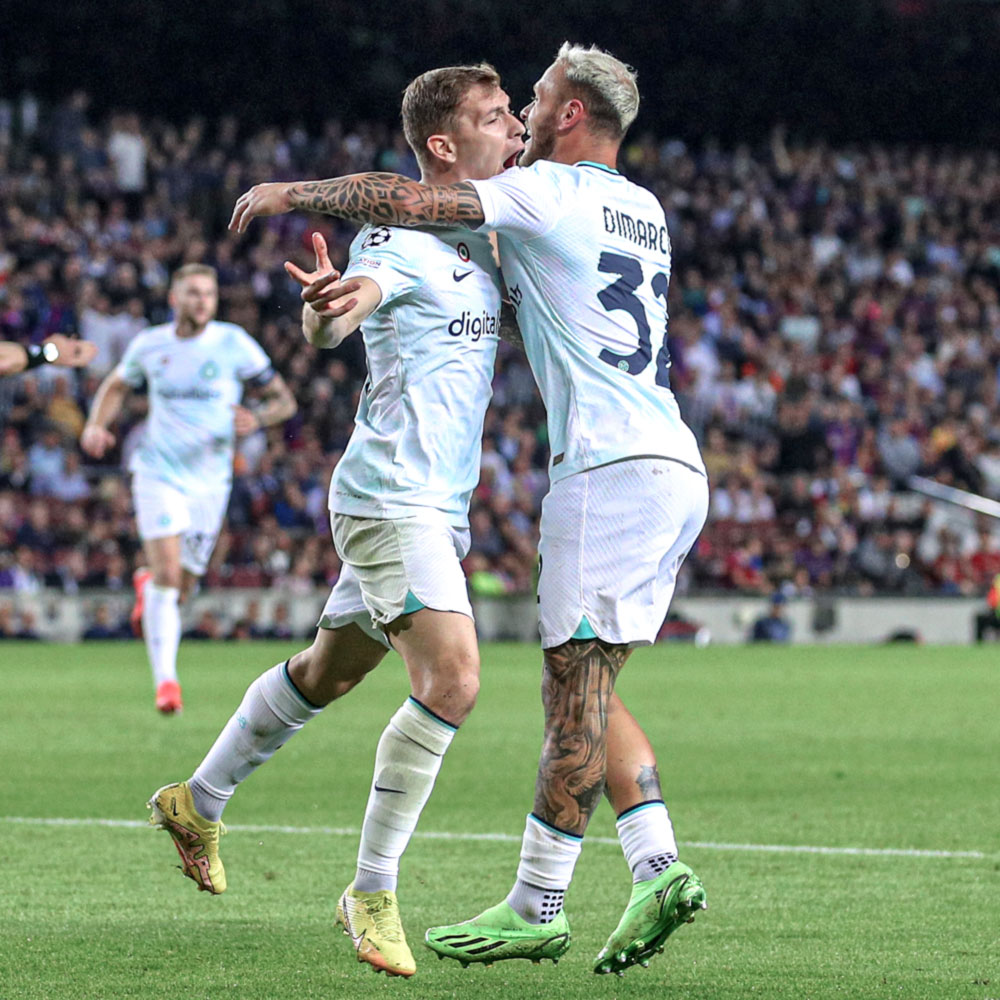 Barcelona's hopes of qualifying for the knockout stages of the Champions League hang by a Viktoria Plzen-shaped thread after this pulsating and dramatic draw against Group C rivals Inter Milan at the Camp Nou. Xavi's team had the better of a thrilling first-half, and went in ahead at the break thanks to a goal from Ousmane Dembélé – but the visitors took advantage of frailties in the Barcelona defence to strike back early in the second half and went ahead through Lautaro Martínez not long after. Robert Lewandowski equalised late, but Barça's hopes of snatching a vital three points disappeared when Robin Gosens put the visitors ahead yet again. A towering stoppage-time Lewandowski header saved a point for the hosts but, saving some Plzen heroics in Milan later this month, Barcelona look destined for the Europa League.

"This Champions League is being cruel to us,” Xavi said after the game. “But in the second half we made a lot of mistakes. The first goal was a clear mistake by the defensive line. Football is a game of mistakes and it's about minimising them. Today we have made very serious mistakes that have cost us."

Getting players between the lines

Xavi set Barcelona up in their familiar 4-3-3 structure, with Ousmane Dembélé and Raphinha starting either side of Robert Lewandowski in the front three. They soon formed their usual back three during build-up, however, with Marcos Alonso staying more reserved at left-back and Sergi Roberto pushing forward and inside from right-back (below). Raphinha and Dembélé held their width on the flanks, while Pedri operated as a number 10, moving higher from his right-sided number-eight position as Roberto inverted. Gavi held his role as the left-sided eight, as Barcelona consistently placed three players between the lines. Lewandowski was the highest threat, looking to combine through the inside channels – especially after switches of play – and working the ball around the second line of Inter’s 5-3-2 block.

Exploiting the inside channels

Barcelona created consistent pressure against Inter’s low block in the first half. They looked most threatening when they broke through or around the visitors’ centre-forward pairing and built through the central spaces. This narrowed Inter’s midfield trio (below), which created more space in the inside channels for Raphinha and Dembélé to move inside from their wide starting positions and connect into secondary runs in beyond from any of Barcelona’s high attacking players. This pattern was key to helping the hosts penetrate deep into the final third so often. Inter defended their penalty area well for the majority of the first half, but Dembélé eventually finished from close range after an inside-channel run and cross from Roberto.

More aggressive down the left

Alonso moved much higher for spells in the second half, especially after Inter scored their equaliser. Gavi maintained his role in the left inside channel, connecting Alonso with the wide Dembélé to build around Inter’s second line. With Nicolò Barella now forced to press out more to Alonso, gaps appeared for passes back inside into Pedri, still operating as a number 10 (below). This central access was best used when Lewandowski moved across to pin Inter centre-back Milan Skriniar, reducing the time Inter’s back line had to jump on to Pedri. Barcelona’s probing from the left led to their second goal, with Inter placing all 11 players in their defensive third to try and limit the number of attempts on goal they conceded in the second half.

Xavi made a host of changes in the second half, as Inter converted into a 5-4-1 defensive shape soon after going 2-1 up. Once Lewandowski’s deflected effort levelled the match, Barcelona converted into a 4-4-2. Substitutes Alejandro Balde and Franck Kessié played as full-backs but flew forward through the inside channels, working in between very wide wingers Ansu Fati and Dembélé, and the centre-forward pairing of Lewandowski and Ferran Torres. Pedri and Frenkie de Jong formed a double pivot in midfield, working the ball around Inter’s midfield line of four to access their front line more directly. Despite Lewandowski’s late header to equalise, Barcelona were unable to break Inter’s super-congested low block one more time and had to settle for a draw that looks to leave them consigned to a Europa League campaign.

Simone Inzaghi set Inter Milan up in a 3-5-2 shape in possession, with the width provided by the wing-backs: Denzel Dumfries on the right and Federico Dimarco on the left. Hakan Calhanoglu dropped to become a single pivot, although he was sometimes supported by Henrikh Mkhitaryan. That allowed Nicolò Barella to play higher from his original starting position in midfield, where he acted as a useful outlet during transitional moments. Inter broke from their low block more effectively on this side, but Barella also combined well with Dumfries on the right during sustained spells of possession. Here, he looked to inhabit the space inside Marcos Alonso (below), with the front two of Edin Dzeko and Lautaro Martínez pinning the Barcelona centre-backs.

Lack of success on the left

With Barella staying high and wide to support Dumfries on the right, left wing-back Dimarco would drop from his high starting position during Inter’s build-up. This drew Sergi Roberto to jump out to press, creating a significant distance between him and the rest of Barcelona’s back line. Quick passing around the corner from Dimarco (below), or bent passes around Roberto from left-sided centre-back Alessandro Bastoni, found Dzeko pinned up against Eric García, as Inter looked to work off the forward’s hold-up play. But with Dimarco dropping and Mkhitaryan still playing as a deeper second pivot, the visitors struggled to consistently access the final third on this side.

Inter’s first goal stemmed from quicker and improved combinations on their left, with Martínez dropping to connect with the deeper central-midfield pair through the inside channel. Dzeko then stayed higher in the final third, pinning one of Barcelona’s centre-backs. With Dumfries still holding the width on the right, gaps appeared for Barella to run forward off the ball and exploit the space around the back of Dzeko (below). With Bastoni gradually moving higher to get more involved in accessing the final third, Inter found a way to equalise, exploiting Gerard Piqué’s poor positioning and judgement.

Varied approaches on either side

Bastoni tried to push forward where possible in the second period, especially with so much frantic end-to-end play from both sides. He looked to run forward through the left inside channel from his wide centre-back role (below), particularly when Barella was more reserved so Inter still had five players covering any transitions. Coupled with Martínez dropping out to connect into Dimarco, Inter’s left proved more fluid and intricate than the direct but still effective movements of Barella and Dumfries on the right. Both Inter’s second and third goals came from direct forward play on their right, with Martínez receiving a switch to finish low past Marc-André ter Stegen before turning provider to cross for substitute Robin Gosens late on. Inter may not have held on for a win, but the point leaves them strong favourites to join group leaders Bayern Munich in the last 16.