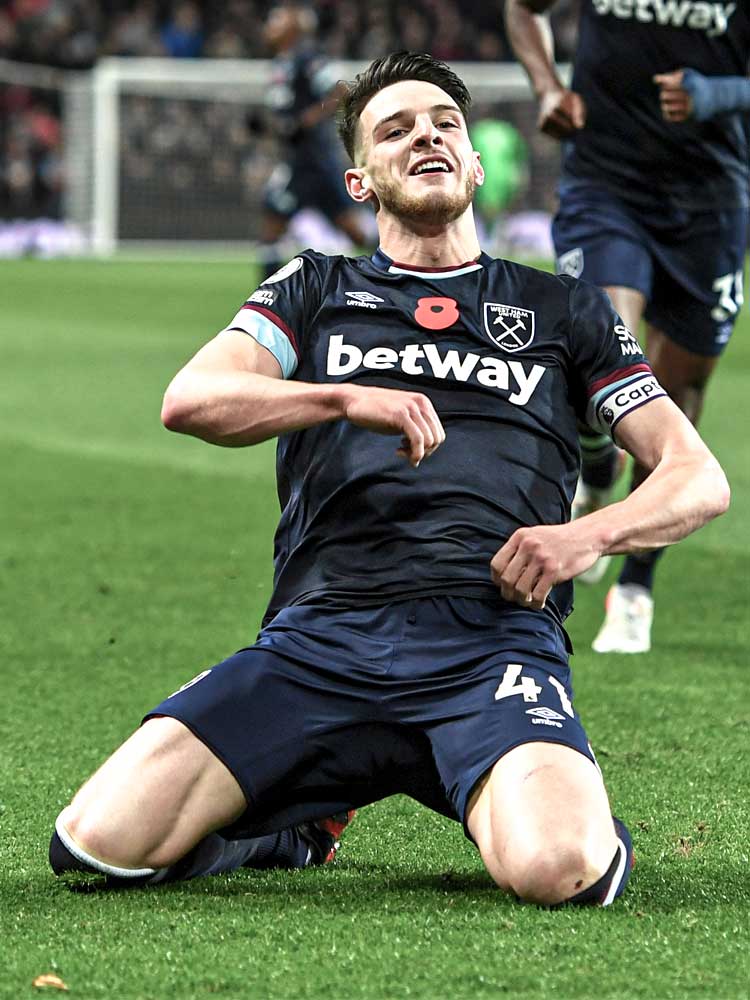 West Ham moved level on 20 points with defending champions Manchester City when they inflicted on Aston Villa a fourth successive defeat in the Premier League. David Moyes' increasingly impressive fourth-placed team took the lead through Ben Johnson, and though Ollie Watkins then struck for Villa, Declan Rice restored West Ham's lead by half-time. Ezri Konsa's 50th-minute red card then undermined Villa's pursuit of a second equalising goal, and Pablo Fornals and Jarrod Bowen capitalised by scoring the visitors' third and fourth goals. "The red card obviously had a big impact on the game," Moyes said. "The performance can be better. What the players have done so far has been fantastic. We have to keep it going." His opposite number, Dean Smith, said: "The red card was the wrong decision. Kourtney Hause could have been sent off but he wasn't. We lacked intensity in the first 15 minutes; they scored a poor goal when we should have doubled up on Johnson when he cut inside and should have saved the second goal."

Struggling for balance in the attacking half
Aston Villa’s attacking shape often involved the formation of a midfield box when Emiliano Buendía drifted infield from the right, but when Matty Cash resisted advancing they lacked width. Matt Targett was also, initially, relatively reluctant to attack from left-back; between them they were likely wary of West Ham's counter-attacking potential. Leon Bailey retained a wide position on the left, limiting the space that Targett required to overlap into. With West Ham's attacking players supporting the attempts of Tomas Soucek and Declan Rice to contain Villa's midfield box (below), the hosts struggled to pose an attacking threat.

Adjusting to attack with increased numbers
Both full-backs later consistently committed to Villa's attacks. From the right Cash would move infield and John McGinn would pull wide, improving their balance, and after also moving infield Buendía sought to advance in behind Aaron Cresswell, providing an element of penetration. Targett advancing from left-back encouraged Bailey to drift infield, in turn increasing the numbers Villa offered in the penalty area (below) and drawing opponents toward him – freeing up Ollie Watkins, who capitalised by scoring their equalising goal. They, regardless, could not risk overlooking West Ham's ability on the counter.

Attempting to counter after Konsa's red card
Villa struggled to dictate play once they were reduced to 10 men, and became reliant on countering forwards. Watkins, their lone striker, was forced into deep territory to hold the ball up until their wide midfielders – Ashley Young was later introduced – and a central midfielder could advance, but Watkins doing so deprived them of an attacking threat around West Ham's central defenders. Their reduced numbers in the attacking half also meant that the forward runs still being made were easier for West Ham to track and cover. The visitors later building attacks with their double pivot further back also increased their defensive cover ahead of their back four, forcing Watkins even deeper (below).

From one attacking shape...
Rice often withdrew from West Ham's double pivot to instead adopt a position towards the left of their defensive line, encouraging Cresswell to advance from left-back (below); further forwards, Pablo Fornals and Saïd Benrahma rotated positions through the left inside channel. West Ham's ability to progress possession towards the left drew Villa's mid-block across the pitch; with Jarrod Bowen then moving infield from the right and Michail Antonio occupying West Ham's left-sided central defender, West Ham succeeded in progressing around Villa's block via switches of play. Ben Johnson capitalised on the space created when he scored their opening goal.

... to another
When Manuel Lanzini later replaced Benrahma, Fornals replaced Benrahma on the left. West Ham's attacking structure then meant them dominating the ball and having both cover when they transitioned into defence and numbers when they attacked. Bowen's willingness to move infield (below) at an earlier stage of their attacks also kept Antonio closer to the left when they built play, and the striker's presence there tempted Villa's defensive line across. Lanzini combined with Antonio and Bowen from central territory, and the defensive cover provided by Rice and Soucek encouraged Johnson and Cresswell to overlap regularly, and Bowen, Lanzini and Fornals to remain central for longer, from where they could more effectively support Antonio.

Counter-attacking potential
When Villa's full-backs started to advance, West Ham responded by targeting wider territory when they countered forwards. Antonio's selfless movements (below) in either direction drew a central defender with him, and therefore created increased space for a teammate to advance into; Bowen and Benrahma both willingly moved infield, and Fornals adjusted his movements as they did so; with one of Villa's central midfielders forced to cover in central defence, their defensive line was also weakened.

Combinations towards the left
Cresswell and Benrahma were influential when West Ham built possession – particularly once Villa had been reduced to 10 men. Rice offered support and cover from behind the ball and remained braced to cover against counters. Soucek moved further forwards, and potentially into the left inside channel (below), when Fornals resisted doing so to support Benrahma and Cresswell. There were also times Fornals made penetrative runs into the inside channel, enhancing their ability to access Antonio and Soucek.

The influence of their number 10
Villa being reduced to 10 men and defending with a 4-4-1 made them easier to progress through; Fornals remained more central, as West Ham's 10, so Rice and Soucek remained withdrawn; whenever one of Villa's central midfielders advanced to support the isolated Watkins, West Ham proved capable of reaching the final third. It was in that advanced territory that Fornals was often between the lines (below), and from where he linked with Bowen and the overlapping Johnson towards the right; Benrahma moved infield from the left to provide support in the inside channel and inside of the overlapping Cresswell. With Johnson and Cresswell both regularly advancing and Rice and Soucek remaining withdrawn, Bowen often moved to form a front two with Antonio.