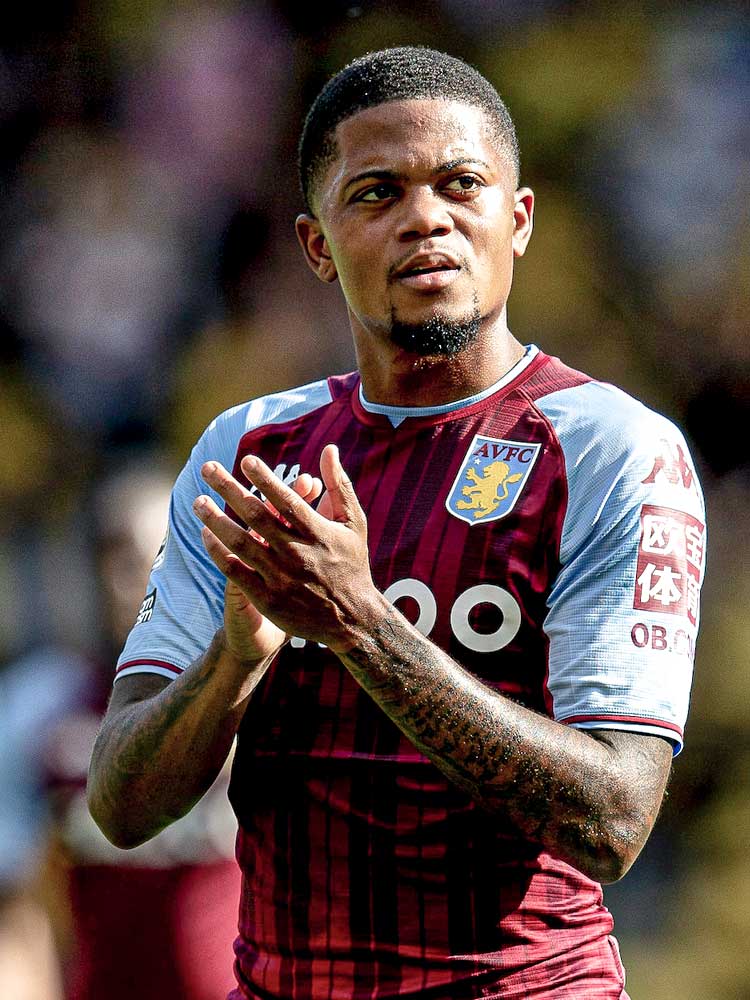 Profile
Such was Jack Grealish's influence, Aston Villa will require significant contributions from several players if he is to truly be replaced after his departure to Manchester City, but there is little question that Leon Bailey, signed from Bayer Leverkusen for £25m, will be judged as his direct replacement. The Jamaican, 23 when he signed a four-year contract in August 2021, regardless joins a new-look attack in which Emiliano Buendía, Danny Ings and Ollie Watkins are also expected to be prominent.

"Leon is hugely exciting, with great pace and creativity," said Villa's manager Dean Smith, whose team has improved throughout his time at the club. "We are now looking forward to watching him show his skills and talents for Aston Villa in the Premier League."

Tactical analysis
Bailey is a versatile, left-footed winger whose greatest strengths are his penetrative qualities. Though he has spent more of his career attacking from the left in a front three, his dribbling ability and off-the-ball movements mean he is also capable of creating from the right. He can also strike the ball with accuracy and power, and therefore provide a variety of finish that complements his instinct to cut infield and shoot across goal; that his runs into central territory from a wide position are improving and taking him closer to goal enhances that.

His ability to time when to drop his shoulder while dribbling also impresses, but remains most effective from close to a static start. It is particularly noticeable when he receives possession towards the edge of the penalty area that he feints to disguise his movement in the opposite direction to create a chance to shoot at goal (below), and that balance and control is as essential then as it is when he is attempting longer-range passes.

The width he is capable of providing is most noticeable from the left, from where he makes an increased effort to receive in behind, often via bending his run across the opposition's defence to remain onside before chasing a through ball. From the right, instead of with his movement, he can more regularly be seen penetrating through defences with the ball at his feet, often having started from a wider position to receive under reduced pressure.

There are also occasions when he withdraws into deeper territory – his judgement is often influenced by the opposition's shape – to receive in increased space to face forwards and isolate his direct opponent (below), and also to gain momentum. He is capable of dribbling in both directions when he does; if driving infield from the right, defenders attempt to force him wide and on to his right foot, but his acceleration and speed means he can often resist them doing so; from the left he can both drive infield and execute deliveries from a wide position.

Regardless of his preference to use his left foot while dribbling, Bailey controls the ball particulary well while advancing with it at his feet. He often uses his right to keep it under close control after using a bigger touch with his left to elude a challenge, and though he will continue to focus on his left for as long as he possibly can, the ability to cushion the ball with his weaker right enhances his potency.

His right foot is also valuable when he is playing the ball. He is proven at both switching play (below) and providing more delicate, defence-splitting forward passes. It is when crossing that his left foot is significantly stronger – if crossing with his right he is mostly limited to delivering low balls across goal, or cut-backs.

Role at Bayer Leverkusen
Throughout 2020/21, Bailey was a regular feature of the 4-3-3 and 4-2-3-1 Peter Bosz and later Hannes Wolf both favoured. The significant width with which they played was valued by both managers, whose senior wide forwards Bailey and Moussa Diaby offered similar traits towards both sides of the pitch. Like Bailey, Diaby made runs in behind to receive on the move, or sought to accelerate beyond opponents after receiving to feet, making him similarly effective on the counter. There were also times when, instead of Diaby, Karim Bellarabi was used on the opposite side of the pitch, where Bailey's switches of play contributed to Leverkusen progressing beyond the relevant full-back, even with Bellarabi's movements being less penetrative.

The width Bailey and either Diaby or Bellarabi provided ultimately favoured Bailey's natural game. With Leverkusen's two wide players remaining as wide as possible, Bailey could isolate his opposing full-back and receive in increased spaces, and to the extent he registered the Bundesliga's highest number of dribbles and one-on-ones during 2020/21. Diaby, incidentally, registered the fifth highest. That Leverkusen's senior full-backs, Daley Sinkgraven and Wendell, were cautious and supported from behind and inside of those wide forwards' positions and played direct forward passes and through balls towards them complemented them and encouraged them to receive possession while facing forwards or to make runs in behind.

From their 4-2-3-1 (above), Patrick Schick, their leading striker, impressively linked play into Bailey's forward runs and made decoy runs to draw defenders out of position, in turn increasing the space Bailey had to attack into. He also moved into deeper territory to help his team to progress through midfield, at a time when Bailey's curved runs instead represented decoy movements.

If Bailey instead attacked from the right, Florian Wirtz worked to provide a similar link to Schick from what became Leverkusen's front four ahead of a double pivot, and their right-back consistently sought to help him to isolate his opposing left-back. From the right Bailey increasingly attacked with the ball at his feet and dribbled forwards; Schick and Wirtz or Nadiem Amiri, in turn, drifted towards the left inside channel in anticipation of Bailey crossing or playing a cut-back, and to create space for him to cut infield.

Leverkusen's 4-3-3 (above) similarly involved both wide forwards having particularly wide starting positions intended to stretch their opposition's defence. With one defensive midfielder and two other central midfielders given the freedom to advance to either side of Schick, they offered an increased number of players penetrating forwards without the ball, and Bailey, prioritising attacking outside of his opposing full-back, therefore had more potential targets for his crosses, or when leading counters.

There therefore also existed an increased number of potential combinations for Bailey to seek out when cutting infield from the right, a starting position that encouraged him to make more movements into the centre, particularly without the ball. Those movements often led to him playing forward passes to those alongside him, or in behind for Schick to pursue, if he wasn't executing switches of play.