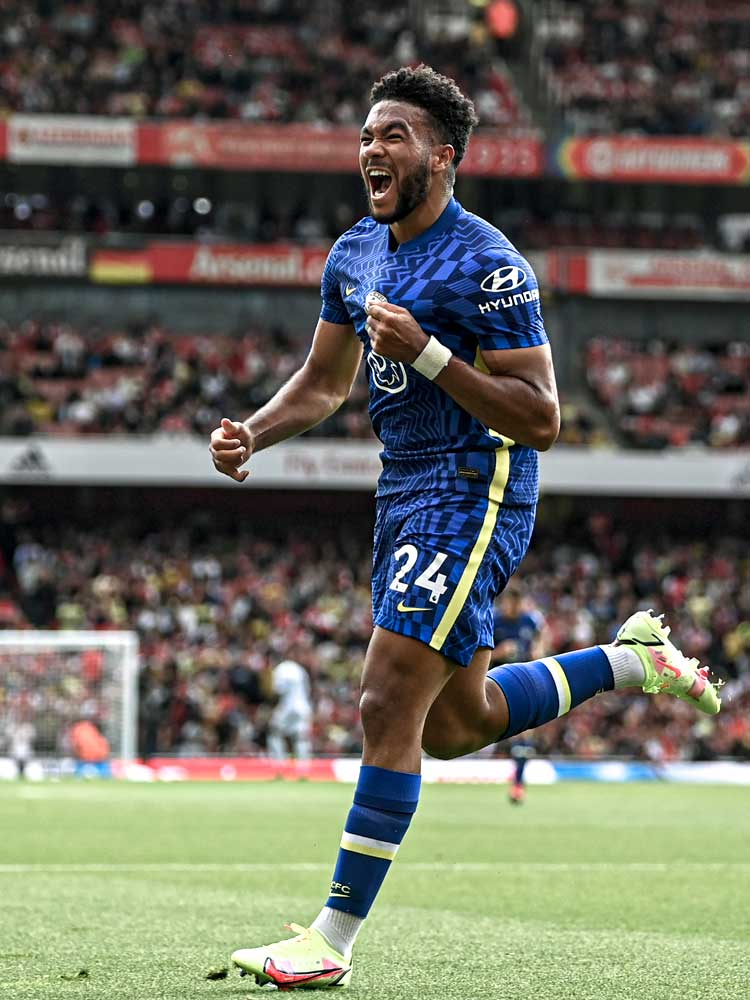 Chelsea's new £97.5m striker Romelu Lukaku scored his first goal for the club as they eased to victory at Arsenal to move top of the Premier League. Reece James' finish later ensured they would take maximum points from their first two league fixtures, move above rivals Liverpool – who also have six points from two – and be rewarded for the dominance that demonstrated what strong contenders they are for the title. "He gives another dimension to our game," said Chelsea's manager Thomas Tuchel of Lukaku. His opposite number, Mikel Arteta, said: "Chelsea were the better team. They have world-class players and to match that level is difficult but my team never gave up. Our attitude was exceptional."

Arsenal were organised by their manager Mikel Arteta into a 4-2-3-1 formation led, on this occasion, by Gabriel Martinelli. Their opponents, Chelsea, defended with a 5-2-3.

When Chelsea applied a high press, Kai Havertz advanced to alongside Romelu Lukaku and joined him in prioritising Arsenal's two central defenders, and Mason Mount withdrew to alongside Mateo Kovacic where, in front of Jorginho, they took Albert Sambi Lokonga and Granit Xhaka. Against that, on the occasions Arsenal had possession for lengthier periods, Bukayo Saka moved infield from the left to encourage Kieran Tierney to overlap from left-back, and Emile Smith Rowe and Nicolas Pépé rotated around Martinelli.

Arsenal, regardless, struggled to progress through what was otherwise Chelsea's compact 5-2-3 mid-block. Thomas Tuchel's team minimised the space between the lines, and offered sufficient numbers through the centre of the pitch that they could prevent combinations there and defend with a back five that covered crosses from wide territory. It was when Smith Rowe received in the right inside channel, on the outer shoulder of Kovacic, and when Pépé and Cédric Soares occupied Rüdiger and Marcos Alonso, that they were likeliest to break forwards. On the left, they were largely reliant on Tierney advancing on the outside and beating his opponent one-on-one, and even then they ultimately lacked an aerial threat or to threaten with lower deliveries.

Saka and Pépé offered potential on the counter, when they drove forwards through the inside channels and drew Azpilicueta and Rüdiger out of position and created space for secondary runners to advance into when Chelsea's wing-backs were too advanced to make recovery runs. More direct passes in behind those same wing-backs and direct runs through wider territory from Saka and Pépé also gave the hosts an effective means of progressing possession with greater speed when Chelsea offered reduced defensive cover, but though they limited Chelsea's ambition, they continued to struggle to create goalscoring chances.

There, similarly, were occasions when switches of play towards Arsenal's wide forwards, when Alonso or Reece James had pressed to take their opposing full-backs, created three-on-threes against Chelsea's central defenders and therefore forced Chelsea to defend in deeper territory. That they continued to press with four players when Arsenal sought to build from their defensive third also forced them into more direct play.

When Pierre-Emerick Aubameyang was introduced and featured alongside Pépé and Martinelli in a front three that offered significant pace, Arsenal proved more capable of transitioning out of their low block. That they defended with increased numbers also tempted Chelsea's central defenders to occasionally attack, and therefore risk more space for Arsenal to attack into. Their defensive approach regardless meant that they offered too little support through the centre of the pitch, and that they continued to struggle to test Édouard Mendy.

Chelsea were set up by their manager Thomas Tuchel into a 3-4-2-1 formation led by Romelu Lukaku. Their opponents, Arsenal, defended with a 4-2-3-1.

Their wing-backs Reece James and Marcos Alonso provided Chelsea's attacking width. That Arsenal's attacking line defended from narrow territory encouraged Chelsea to build around them, through Kai Havertz and Mason Mount moving into the inside channels to combine inside of their advancing wing-backs. Arsenal's defensive midfielders regularly defended from deeper territory, in a lower block inside their defensive half, to limit access into Chelsea's front three; against that, Lukaku and Havertz sought to form a front two to increase their passing options through the centre of the pitch, Mount remained in the right inside channel, and Mateo Kovacic advanced towards the left.

With Arsenal continuing to defend with a narrow shape, Havertz adjusted to drift towards the left; the ongoing attacking movements of Chelsea's wing-backs meant that access into Lukaku soon became easier. When the Belgian seured possession he then linked with Kovacic and Jorginho, whose passing abilities helped them through Arsenal's defensive block, contributing to them scoring their first goal when Lukaku, amid the off-the-ball movements of Havertz and Mount, scored from James' low ball.

Tuchel's team were similarly effective when countering, when the focal point provided by Lukaku contributed to him feeding those making forward runs. Mount and Havertz both advanced through the inside channels, and James and Alonso also made forward runs outside of them. Direct passes into Lukaku and switches to the far-side wing-back also succeeded; James, particularly, became a regular target, and as a consequence discouraged Kieran Tierney from attacking. It was when an attack was built between wing-back and attacking midfielder that one of Arsenal's defensive midfielders was drawn wide and James moved into a position from which to double Chelsea's lead.

The wing-back's attacking movements started to vary, encouraging César Azpilicueta to advance from defence; when James moved infield, Mount drifted wider on the right, from where Azpilicueta provided crosses into Lukaku and Havertz and Chelsea were considerably more fluid. There later came a time when Lukaku also prioritised the right inside channel, from where he turned infeld on to his stronger left foot or combined with those already moving towards the right. It was from a cross from the right from Mount that Lukaku headed against the crossbar.