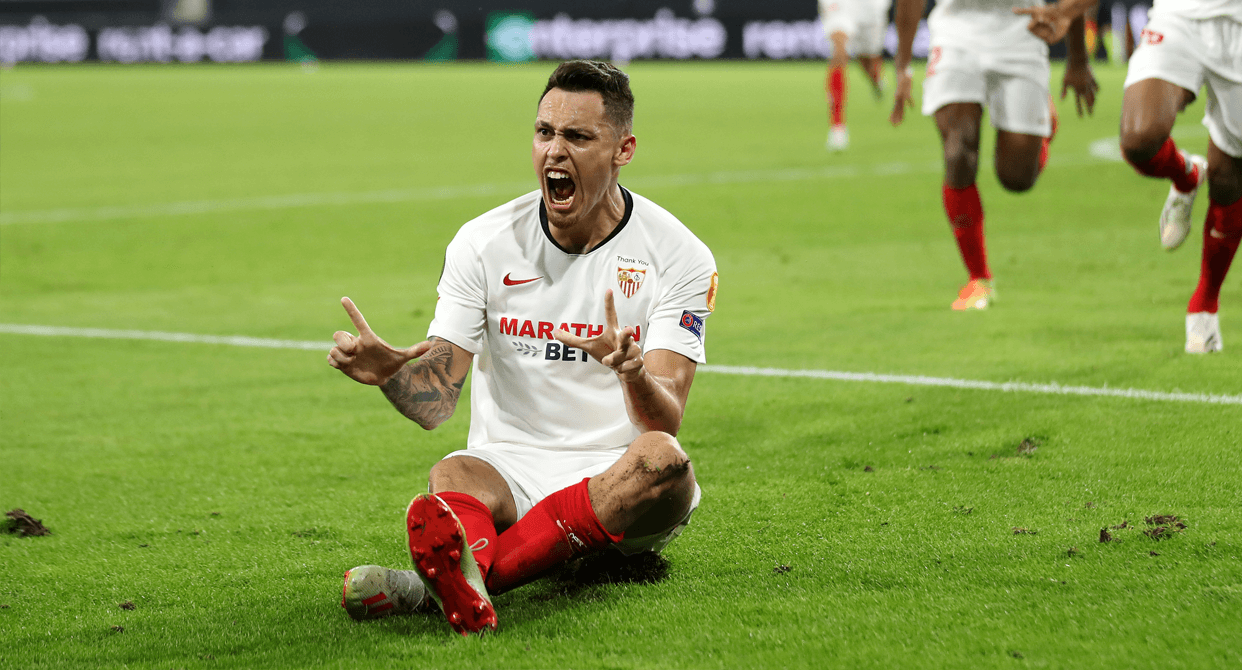 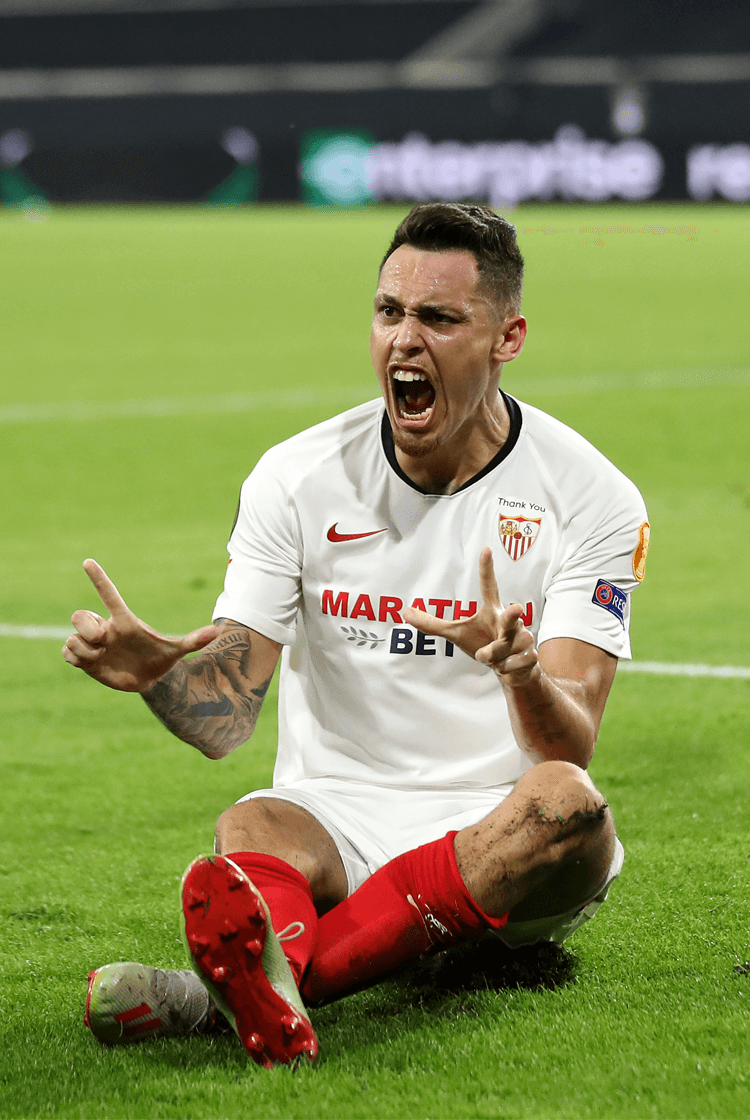 Sevilla progressed to the semi finals of the Europa League, where they will meet Manchester United, after eliminating Wolves. Raúl Jiménez saw his first-half penalty – which proved to be Wolves' best chance – saved, and Sevilla finally overcame their opponent's resilient defensive block when Lucas Ocampo scored from Éver Banega's cross in the 88th minute. Defeat concluded Wolves' 2019/20 campaign after a remarkable 383 days – largely owing to the coronavirus pandemic – and means that, combined with their seventh-placed finish in the Premier League, they will not be involved in European competition in 2020/21. Inter Milan and Shakhtar Donetsk are the other two semi finalists. "It is time to reflect and analyse," said Wolves' manager Nuno Espírito Santo. "The team that started the game is the same as the first game of the season. We made mistakes we cannot repeat. Let's look at our future and what we need." 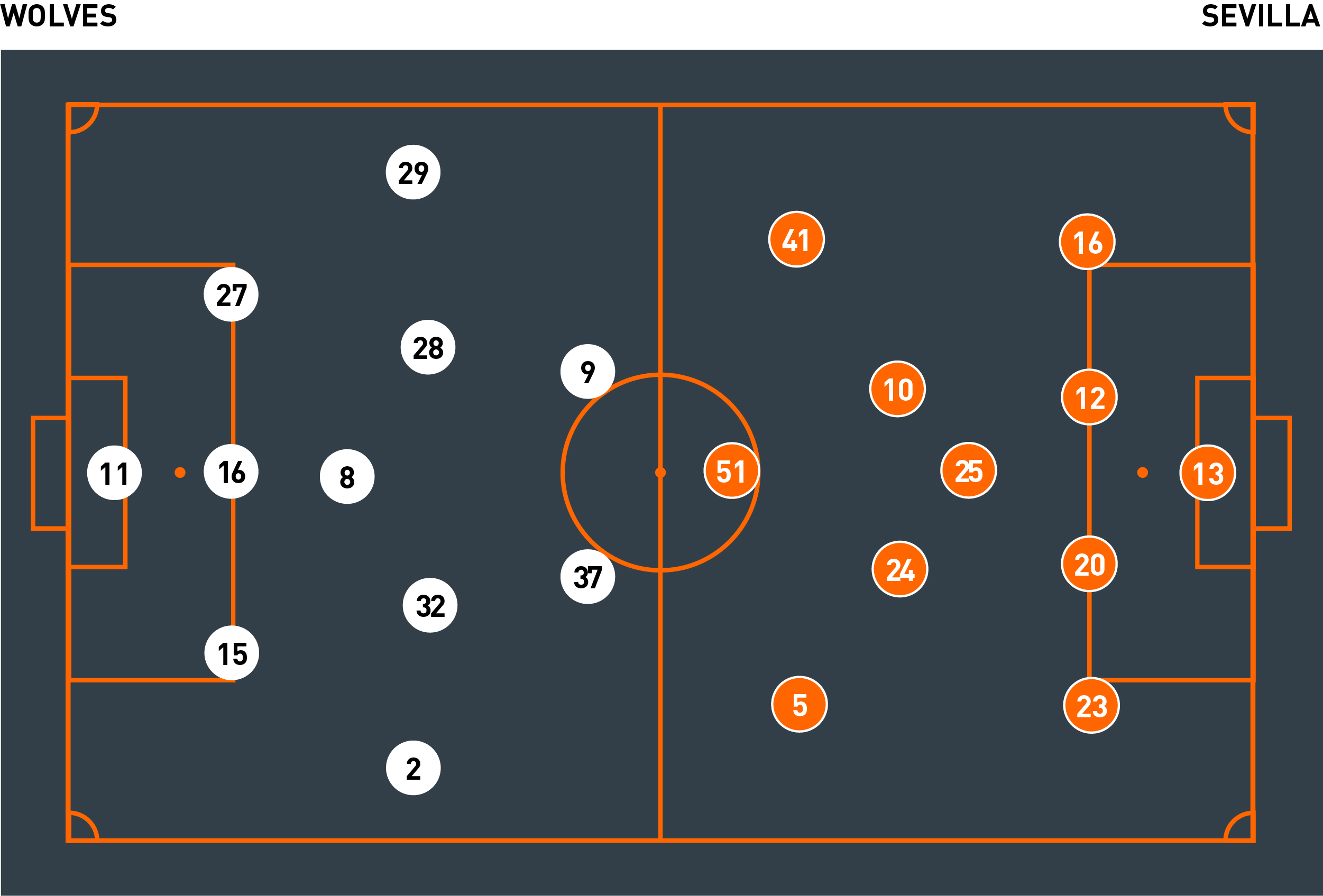 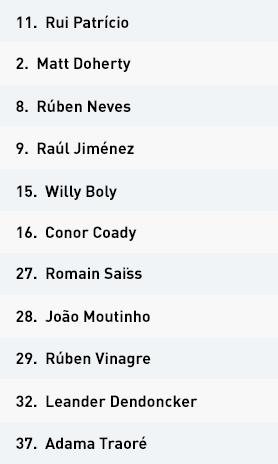 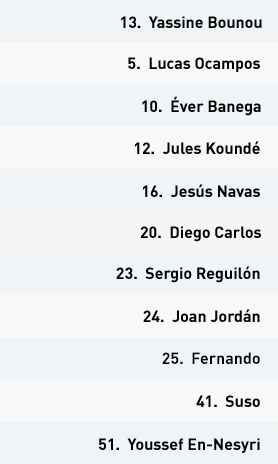 Wolves were organised by their manager Nuno Espírito Santo into a 3-5-2 formation, against the 4-1-4-1 Sevilla defended with, and which featured Fernando between their defensive and midfield lines. Wolves chose to forfeit possession and to encourage Sevilla to advance into their half, and to instead prioritise transitional opportunities, especially those led by Adama Traoré.

Their favoured approach showed signs of succeeding when Traoré’s 60-yard run led to a penalty, but Raúl Jiménez experienced that penalty being saved by Yassine Bounou. Sevilla sought to press Wolves high up the pitch on the occasions Wolves attempted to play out from defence; Youssef En-Nesyri led that press by closing down the wider central defender screening passes inside to Conor Coady. Occasionally the far-side wide attacker would also prioritise Wolves' far-side central midfielder, creating an extra number inside for Sevilla.

Wolves’ in-possession structure was cautious. Leander Dendoncker occasionally pushed up close to towards Jiménez and Traoré, but where possible they kept a minimum of five players behind the ball, making it difficult for them to create goalscoring chances. They were regularly severely outnumbered in Sevilla's half, and against a team with a fine defensive record.


With the exception of their penalty, Wolves had no quality goalscoring chances. The introduction of Pedro Neto, for Moutinho, in the 71st minute contributed to them reorganising into a 3-4-3. They therefore had greater width in transitional moments; moving from a 5-4-1 to a 3-4-3 is more fluid than from a 5-3-2 to 3-5-2, owing to the shorter distances their wing-backs were being asked to cover.

Santo's team complemented that change in shape by focusing on their increased width, when they had previously been more direct. The security provided by Diego Carlos, Fernando and Jules Koundé, however, alongside the intense recovery runs made by their wingers and full-backs, meant that Sevilla could nullify the threat they potentially posed.

Sevilla manager Julen Lopetegui set his team up in a 4-3-3 formation, and they came up against opponents in a 5-3-2 mid-block. Sevilla enjoyed almost complete control of possession but struggled to break down a very organised and compact defensive block.

They often used Fernando in between centre-backs Diego Carlos and Jules Koundé to create a three-on-two overload against Wolves’ front two, which helped get past the first line of their opponents' structure. The next phase was to attempt to progress beyond Wolves’ midfield three; João Moutinho, Rúben Neves and Leander Dendoncker worked tirelessly to remain compact, inviting Sevilla to play in front of them and around them but making it very difficult to play through the centre of the pitch.

Sevilla used several methods in their attempts to take advantage of any opportunities Wolves handed them. The most straightforward was to use Éver Banega as a false full-back on the outside of Diego Carlos, encouraging Sergio Reguilón to advance beyond midfield from left-back. Banega also switched play from left to right from his false full-back position – again attempting to bypass Wolves' midfield by moving possession at speed. Sevilla looked to position players centrally, between Wolves' midfielders, while also having others in wider positions to horizontally stretch the pitch. The deployment of numbers between Wolves’ midfielders, coupled with vertical bounce passes to their feet, further compacted Wolves' shape, which in turn increased the spaces Sevilla’s wide players sought.


Sevilla's attacking players also used blindside movements to progress beyond Wolves’ midfield. Suso and Lucas Ocampos frequently moved to the opposite wing and, with the opposing full-back naturally holding his position rather than tracking them they moved to the blindside of their opposing midfielders and collected possession between the lines. Wolves’ compactness meant Sevilla had to be patient in moving the ball across their defensive line to try and create an opportunity to play forwards. As the ball travelled between their central defenders, the wide forward who had left his position moved diagonally on the blindside of Wolves’ wider central midfielders to create a passing option. That pass was almost always coupled with the relevant full-back advancing, creating a potential two-on-one on the outside. This was particularly common towards the right, where Jesús Navas was keen to attack.

Penetration beyond Wolves’ defence was far harder for Sevilla to achieve. Their use of five defenders ensured that there was very little space for Sevilla work with, and their defensive line being so deep ensured that there was also limited space in behind. Attempts at penetrative passes often came either on the outside of Wolves’ wing-backs or between their wing-back and wider centre-back. Passes outside of the wing-back led to crossing opportunities, but Wolves' centre-backs, particularly Willy Boly and Conor Coady, often negated these. Passes in between the wing-back and wider centre-back carried a different threat depending on the run that met the pass. If the run was made across the front of the wider centre-back a defender could track it comfortably and shepherd play towards the touchline, but if it was made behind him then it became more difficult to track, and led to low crosses or cut-backs.

Wolves were well drilled in using a wider centre-back, the far-side wing-back and Coady to withdraw to towards goal to prevent any low crosses into the six-yard box, and the midfielders in front of them worked relentlessly to track runners from deep and to deal with any cut-backs. It was this organisation and commitment that made it so difficult for Sevilla to create quality goalscoring chances. Only after a lack of focus at a set-piece did Sevilla score.