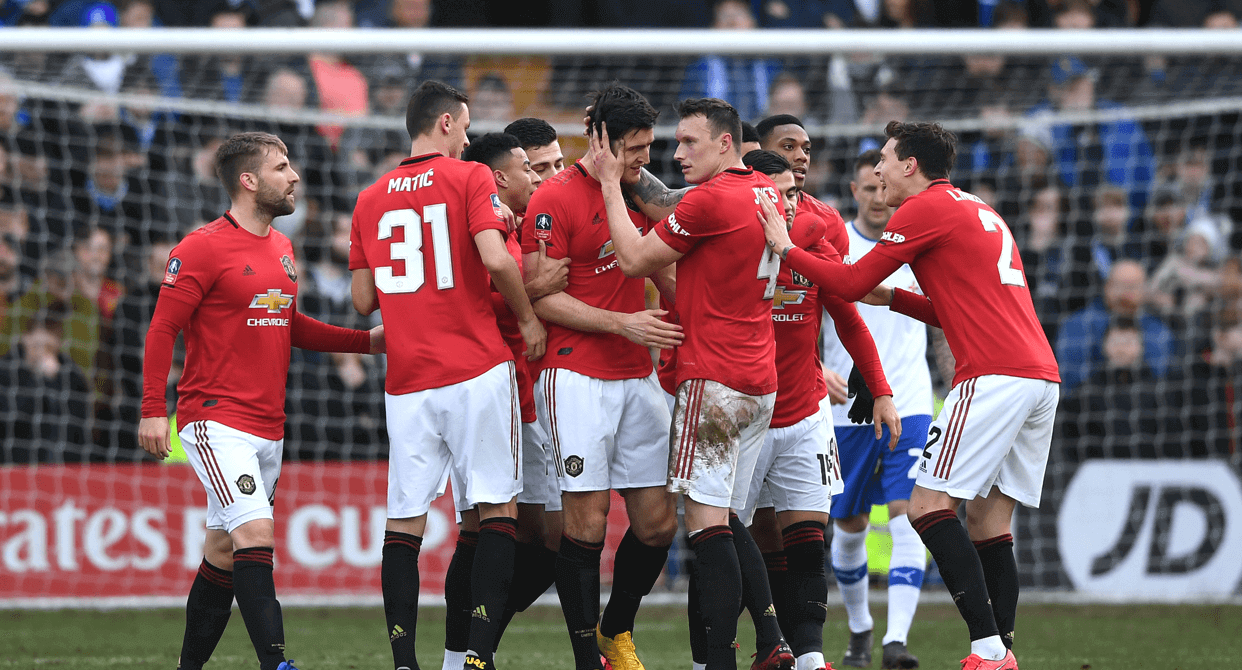 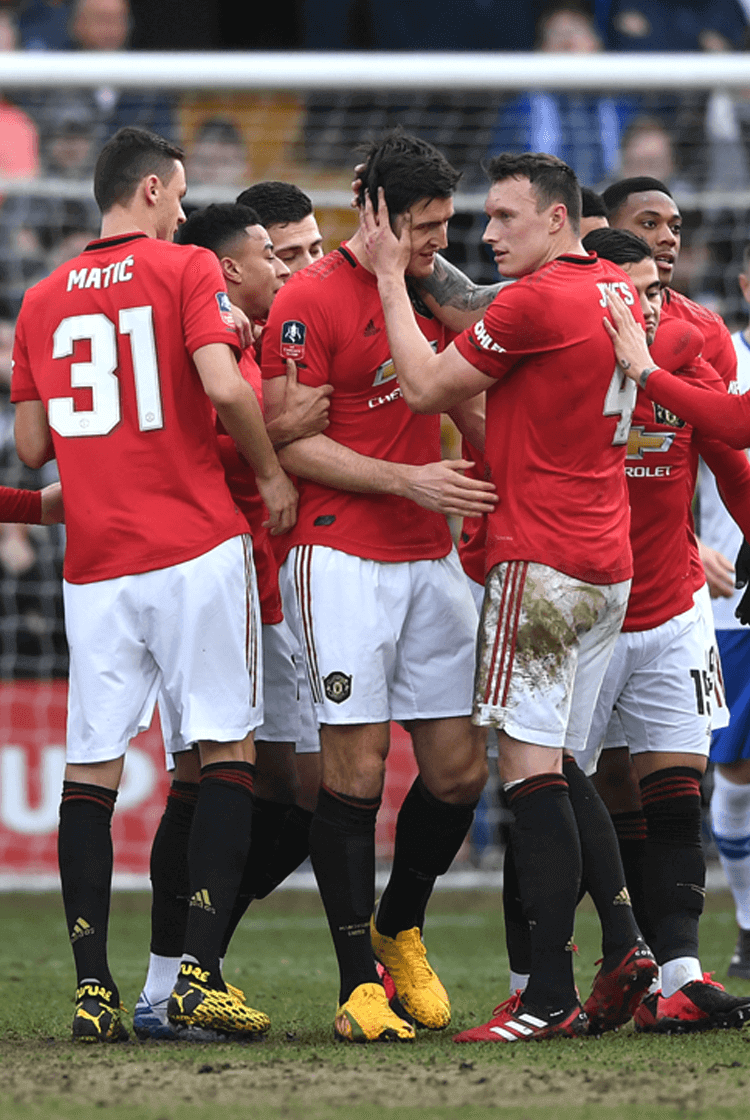 Manchester United responded to the successive defeats they had suffered against Liverpool and Burnley by easing into the fifth round of the FA Cup with their most one-sided victory since Sir Alex Ferguson's retirement. In the absence of Marcus Rashford, their leading goalscorer, goals from Harry Maguire, Diogo Dalot, Jesse Lingard, Phil Jones and Anthony Martial – inside the first half – and then Mason Greenwood eased some of the pressure that had been building on their manager Ole Gunnar Solskjaer, who was also able to rest some of his first-team players. "It's important we spread goals through the team," Solskjaer said. "We've lost Marcus (Rashford) for a little while. Our two strikers scored; it is a confidence boost for everyone. You can see everyone wanted us to fail but it doesn't bother me. I can't be up and down (emotionally). I'm happy but won't relax. There are two big games coming up." 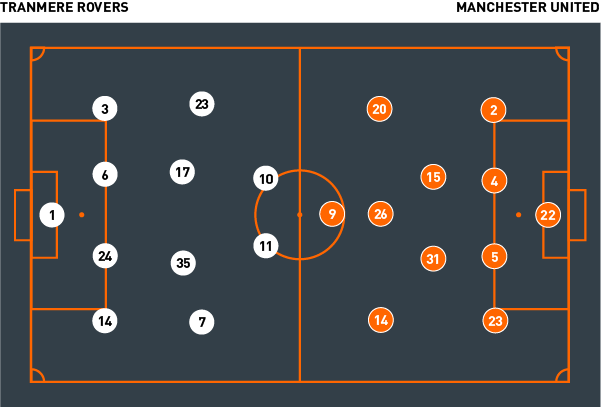 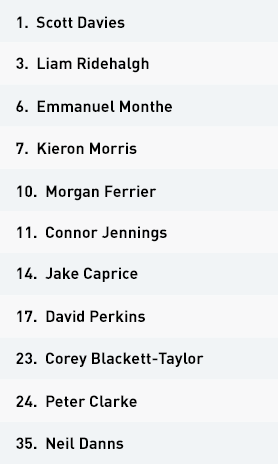 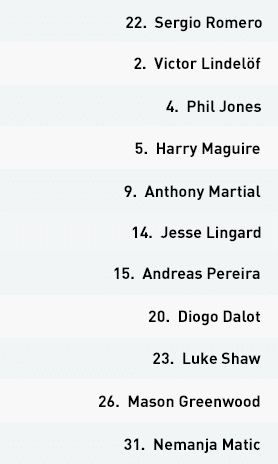 Tranmere started with a 4-4-2 formation, but their manager Micky Mellon swiftly reorganised them into a 4-3-3 during the periods they had possession. They were confronted with visitors who defended with a 5-2-3, and whose press was led by the front three of Anthony Martial, Jesse Lingard and Mason Greenwood.

If they started with some promise, the three goals they conceded from the 10th to the 16th minute almost immediately took victory beyond them, and they thereafter struggled to retain possession and to create threatening attacks. Their first half approach largely involved attempting to play Morgan Ferrier in behind, and one-on-one against Manchester United's central defenders Phil Jones or Harry Maguire, where the forward sought to drive inside and then shoot across goal, but did so ineffectively.

If they had an improved grasp of possession during the second half, Tranmere attempted to reach the final third by playing with width, through Corey Blackett-Taylor attacking Victor Lindelöf or Diogo Dalot one-on-one, when he would attempt to beat them on the outside and cross from towards the byline. United's organisation regardless meant that those crosses were blocked, or he was restricted in the areas he was able to deliver it to.

Tranmere also favoured playing direct balls from goal-kicks, but Jones and Maguire were dominant in the air, and therefore won the majority of the first contacts. The hosts were essentially limited by their compact shape when they had possession.

The distance between their units was minimal, and because of the good numbers they had around the ball they were also easy to press. That, combined with their lack of technical quality and a pitch that did not help attempts to play short, contributed to them losing convincingly.

Ole Gunnar Solskjaer organised Manchester United into a 4-2-3-1 formation and, in an attempt to rest several of his most consistent starters, selected Nemanja Matic and Andreas Pereira as an unfamiliar pairing at this base of his midfield. Responding to United, and the presence and threat they posed between the lines, Tranmere quickly went from defending with a 4-4-2 to a 4-1-4-1.

Jesse Lingard and Mason Greenwood particularly relished the spaces between defence and midfield, largely created by the reluctance of Tranmere's defenders to abandon their positions. David Perkins was therefore given the role of defensive midfielder, in an attempt to negate that.

With that leaving Morgan Ferrier leading their press in isolation, United's central defenders Harry Maguire and Phil Jones switched play with relative ease, taking him out of the game. When Maguire advanced with possession, one of Tranmere's midfielders followed him, so either Matic or Pereira, or further forwards Greenwood or Lingard, would be freed up.

Through finding the relevant free number, United's attackers were able to receive, turn and advance; complemented by the incompetent press Tranmere were applying in midfield, Maguire, Lingard and Anthony Martial were all able to score from distance. Solskaer's team also regularly prioritised the left wing, and created overloads against the hosts' struggling right-back Jake Caprice. Rotations between Greenwood, Martial and Lingard disorganised their opponents, amid their attempts to maintain a compact shape.

Maguire often led those passages of play by drawing a midfielder, inviting those rotations, and ultimately unsettling Tranmere's defence – which became narrower, and therefore encouraged Luke Shaw to attack from left-back. When in the second half Solskjaer demanded they adopt a 4-2-3-1 – Fred and Tahith Chong respectively replaced Matic and Martial – their use of wing-backs led to switches of play, and most commonly from the left to the right. Only a lack of end product when they did so denied them from winning by an even wider margin.