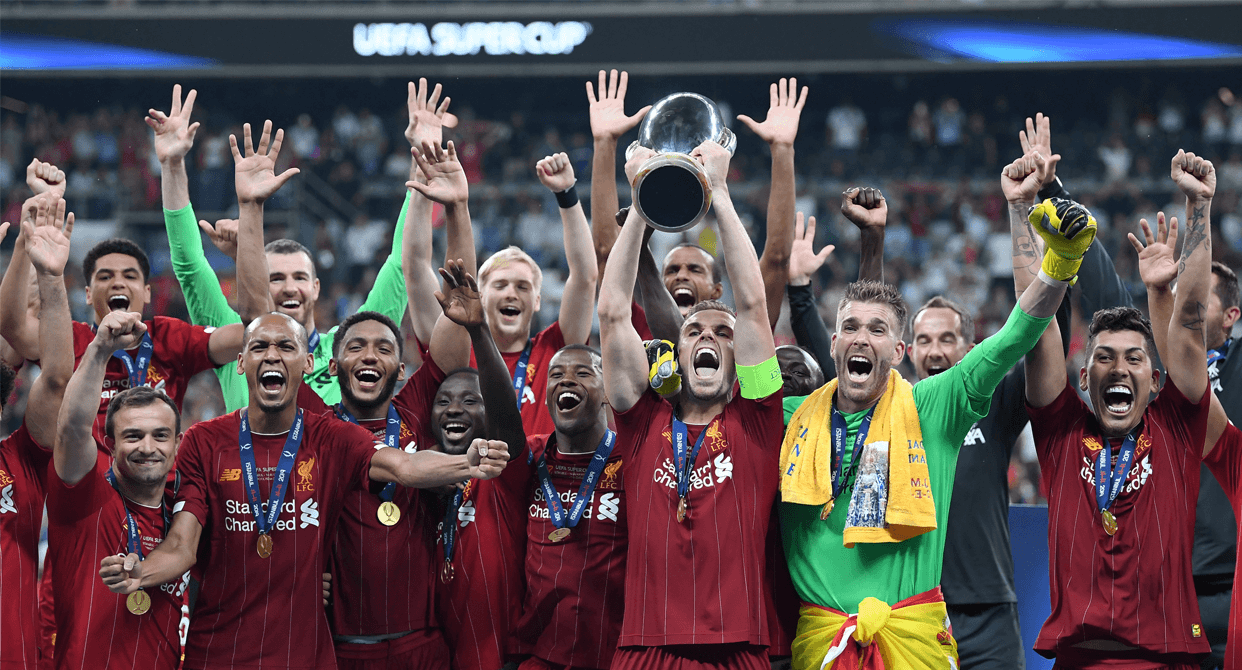 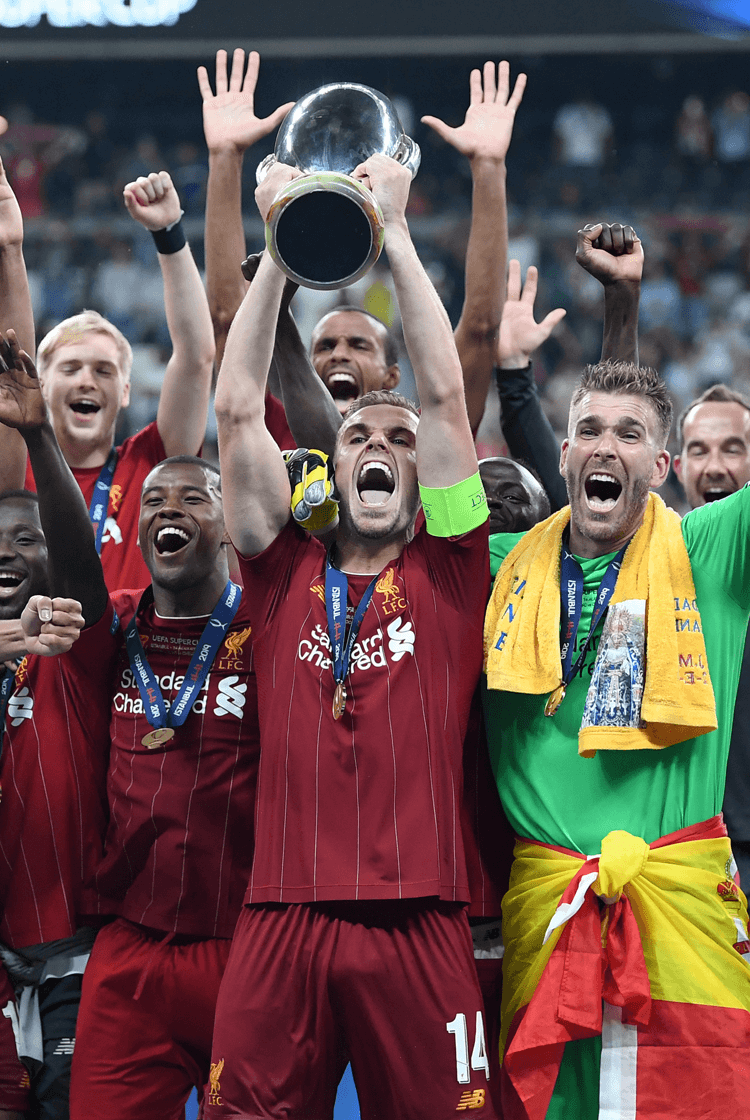 Liverpool and Chelsea required penalties to separate them when they met in Istanbul to contest the first ever all-English Super Cup. Chelsea produced a vastly improved performance than they managed in Frank Lampard’s first competitive fixture as manager against Manchester United on Sunday, owing largely to the return of the influential N’Golo Kanté – and the Blues took a deserved lead through Olivier Giroud late in the first half. Liverpool, who handed a first start to Adrián in the absence of the injured Alisson, improved with the introduction of Roberto Firmino in the second half. The Brazilian duly created the equaliser for Sadio Mané, who scored again to give the Reds the lead in extra time. Jorginho drew Chelsea level from the spot after Adrián was adjudged to have brought down substitute Tammy Abraham, but the goalkeeper had his revenge when making the decisive save from Abraham in the ensuing shootout. Victory for Liverpool went some way to making amends for their defeat on penalties against Manchester City in the Community Shield. 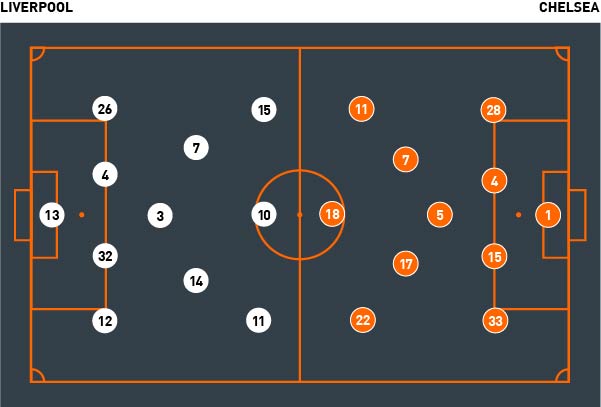 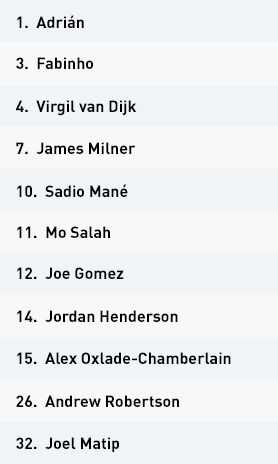 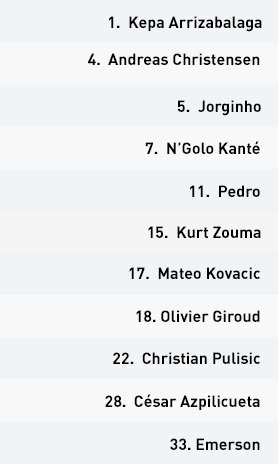 Jurgen Klopp set Liverpool up in a 4-3-3 formation led by Mo Salah, Sadio Mané  and the returning Alex Oxlade-Chamberlain in front of Fabinho, James Milner and Jordan Henderson. That midfield three covered a significant distance during the first half; Fabinho remained central and offered safe passing options and security against transitions, while Henderson looked to offer an attacking threat behind Chelsea’s midfield and defence, and Milner largely drifted. The latter occasionally operated as a false full-back to encourage Andy Robertson to push up, a false central defender to allow both full-backs to advance, or a left-sided attacker so that Oxlade-Chamberlain could join Mané more centrally. The Reds’ midfield proved difficult to track, but it also often lacked balance and struggled to create consistent and organised attacks.

Liverpool targeted the space behind Emerson, regularly dropping Salah towards possession out wide to receive a diagonal pass and forcing the Chelsea left-back to press him. Henderson would then make a diagonal run behind Emerson to receive from Salah before looking to cross into the penalty area for Mané or Oxlade-Chamberlain.

Roberto Firmino’s introduction in the second half ensured a superior balance and presence in central areas. The Brazilian, as is routine, regularly dropped into midfield to create an extra option and look to link play, allowing Mané and Salah to stay high and threaten the spaces in behind. This in turn worked to deter Chelsea’s central defenders from following Firmino.


After Georginio Wijnaldum’s arrival for Milner, the Dutchman and Henderson assumed increasingly attacking positions. They often operated as far forward as Salah, Firmino and Mané, in an effort to tempt Chelsea’s defenders into following their many movements and thus create spaces they could penetrate.

Chelsea switched between a 4-3-3 and 4-1-4-1 when out of possession; Jorginho, N’Golo Kanté and Mateo Kovacic were in midfield behind Christian Pulisic, Olivier Giroud and Pedro, until Pulisic and Pedro tucked into midfield and Jorginho dropped in front of their back four. They remained patient, operating in a mid-block instead of the high press seen in their recent 4-0 defeat at Manchester United. Kanté or Pulisic occasionally advanced to join Giroud and press the central defender on their side, but they waited for the defender to receive a horizontal pass and only did so if they were close enough; acting on these triggers also improved their off-the-ball approach, compared to that seen against United.

The Blues attempted to counter Liverpool’s midfield with individual responsibilities; Kovacic and Kanté respectively focused on Henderson and Milner, and Jorginho moved up to press Fabinho, but those responsibilities became less defined when the Liverpool players operated in deeper and wider positions. Then, the Chelsea midfielders remained in their positions and compact.

When Firmino came on, Chelsea began to struggle with Liverpool’s build-up. His presence made Jorginho reluctant to press Fabinho, who capitalised by receiving and turning in possession throughout the second half as Liverpool improved markedly.

Frank Lampard set his Chelsea team up in a 4-3-3 formation in possession. They struggled to dominate the ball during the first half, and were instead limited to counter-attacks led by Pedro, Christian Pulisic and Olivier Giroud attempting to exploit the spaces left during transitions; N’Golo Kanté was also a major threat in attacking transitions, often winning possession and then driving forwards.

Instead of building from deep from goalkeeper Kepa Arrizabalaga, Chelsea regularly played directly to Giroud, who had mixed success in his aerial duels with Virgil van Dijk and Joel Matip. As the first half progressed, however, the Blues began offering a significant threat to the space behind Liverpool’s defence. The European champions played with lots of space behind their back four, ensuring that they remained compact further up the pitch but making it difficult to defend that space when they maintained a high line without pressure on the ball carrier.

Chelsea therefore attempted to play passes in behind, but the timing of their release was often fractionally late, leading to their attackers being caught offside and two goalbound finishes being ruled out. They also demonstrated fluidity and intelligence in the final third, creating problems for their opponents with diagonal runs in behind their defence and shorter passes for their attackers to run on to – as was seen with Giroud’s movement to collect a Pulisic pass for the game’s opening goal.

Out of possession, Liverpool remained in their long-favoured 4-3-3 and looked to aggressively press Chelsea. In the first half, Mané, Salah and Oxlade-Chamberlain respectively targeted Kepa, Kurt Zouma and Andreas Christensen. In midfield, Henderson marked Kovacic, while Milner and Fabinho would occupy Kanté and Jorginho.

In the second half, substitute Roberto Firmino picked up Jorginho, thereby freeing up Fabinho. If fellow substitute Georginio Wijnaldum or Henderson pressed Chelsea’s full-backs, the industrious and disciplined Fabinho would offer cover. This method of pressing protected Liverpool’s back four; with Gomez and Robertson dropping for Pulisic and Pedro, Liverpool’s concern instead became the space behind their defence, particularly when they were applying little or no pressure on the ball.