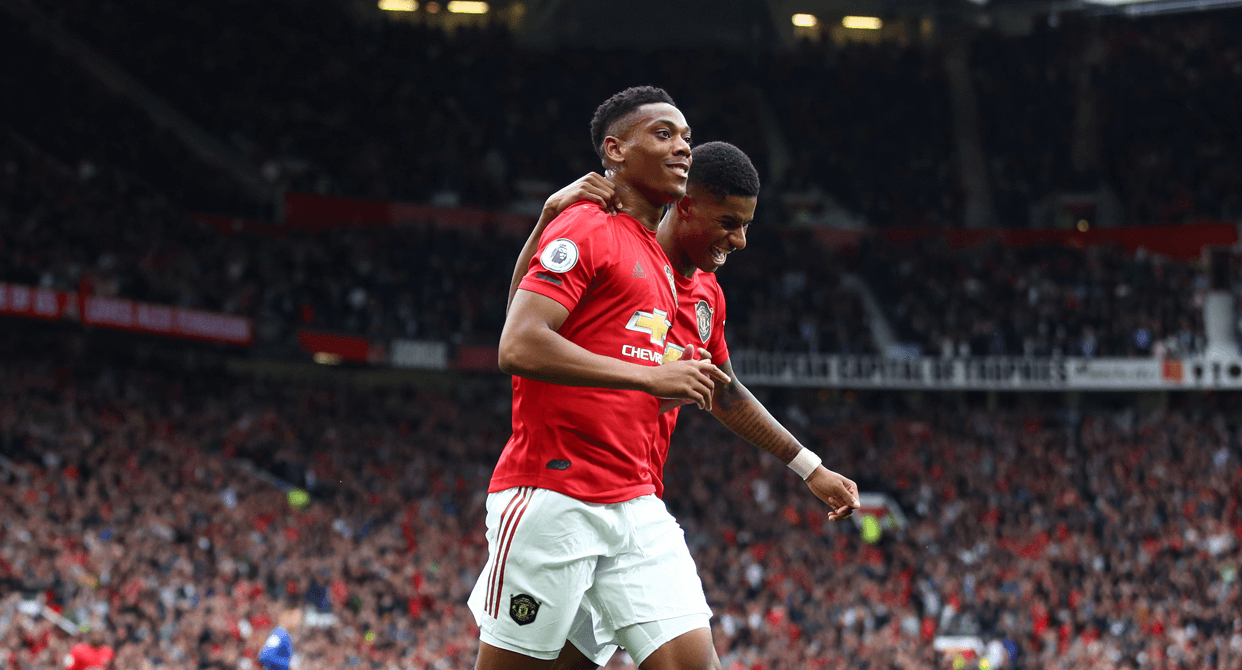 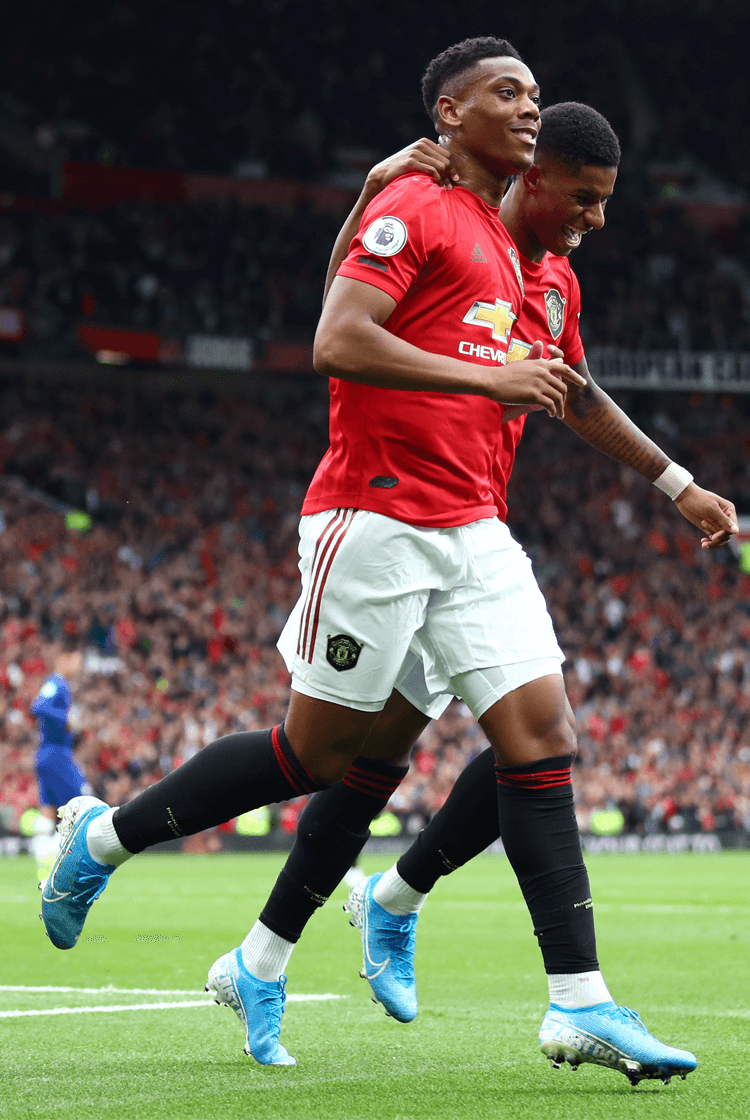 The first competitive fixture of Frank Lampard’s reign as Chelsea manager ended in a disappointing 4-0 defeat at Manchester United, whose new-look team started the season in the style they desperately needed. A promising start from an XI that unexpectedly featured the 20-year-old Mason Mount led to Tammy Abraham striking the post, but a clumsy challenge from Kurt Zouma on Marcus Rashford gifted United the 18th-minute penalty from which Rashford gave them the lead, and the visitors thereafter often struggled to compete. Anthony Martial doubled the hosts’ lead from close range in the 65th minute, and soon after Rashford scored the game’s finest goal when controlling Paul Pogba’s lofted pass before finishing beyond Kepa Arrizabalaga. Substitute Daniel James’ late strike may have been harsh on Lampard and Chelsea, but it gave United and Ole Gunnar Solskjaer the lift they required after so disappointing a conclusion to 2018/19. 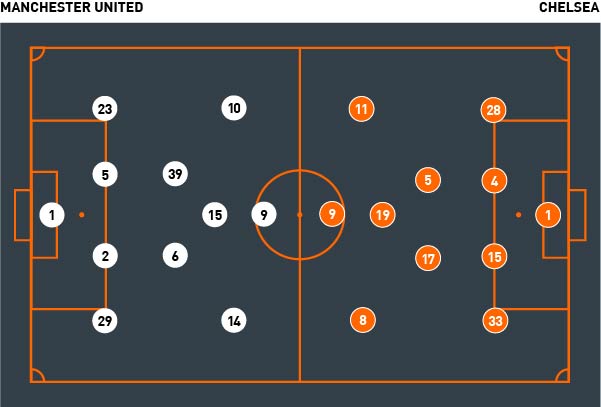 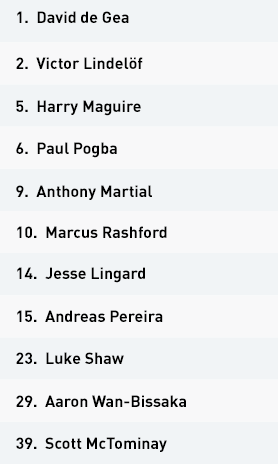 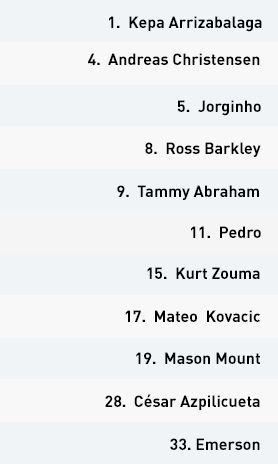 Ole Gunnar Solskjaer organised Manchester United into a 4-2-3-1 formation in possession. Scott McTominay and Paul Pogba were the double pivot behind Jesse Lingard, Andreas Pereira and Marcus Rashford, who supported central striker Anthony Martial. That attacking quartet were fluid in their positioning and dropped to receive possession but consistently kept one forward to discourage Chelsea’s defence from following the other three. They also attempted to create an overload against Jorginho and Mateo Kovacic in those central areas, and remained narrow to encourage full-backs Aaron Wan-Bissaka and Luke Shaw to advance.

During their build, United largely played through Paul Pogba, who regularly found space between Chelsea’s attacking and midfield lines to turn and advance play. McTominay performed with far greater caution but was similarly impressive in what he offered – chiefly, passing options for his defenders and cover when debutant Harry Maguire wanted to drive forward from central defence.

Having taken the lead, United operated closer to their own goal and attempted to hit Chelsea on the counter-attack, which they did clinically. In moments of transition they played forward early and sought to keep four runners ahead of the ball; those runners would then swap directions to further disorganise Chelsea’s already-stretched defence.

While out of possession and in the first phase of the press, Chelsea were also in a 4-2-3-1, in which Ross Barkley, Mason Mount and Pedro supported Tammy Abraham; this became a 4-2-4 when Mount joined Abraham through the middle and Pedro and Barkley pushed up from out wide. Gifting Pogba significant space between their first and second lines, Frank Lampard’s team struggled to be compact between those units, allowing United to progress easily. When they responded by dropping Abraham and Mount on to Pogba and McTominay, and using Pedro and Barkley to pressurise Shaw and Wan-Bissaka, Maguire was comfortable carrying the ball out from the back, in turn committing Abraham or Mount and thereby freeing a teammate.

The visitors also tried to squeeze United higher by sending Mount and Abraham to press Maguire and Lindelof and using Kovacic and Jorginho on Pogba and McTominay. United would then drop their attacking midfielders into the new large space between the second and third lines of the Chelsea unit and eliminate six Chelsea players when managing to find them.

Chelsea began the game in an attacking 4-2-3-1 formation, attempting to dominate possession through one of their deeper-lying midfielders – Jorginho or Mateo Kovacic – dropping between centre-backs Kurt Zouma and Andreas Christensen. This worked to widen their defensive line and encouraged full-backs Emerson and Cesar Azpilicueta to push higher out wide.

They targeted the wide areas, using Pedro and Ross Barkley to occupy Manchester United’s full-backs and wide attackers, often bouncing passes with their central defenders to drag Marcus Rashford or Jessie Lingard towards possession and create space for Azpilicueta and Emerson. If the Chelsea full-backs were then pressed by Luke Shaw and Aaron Wan-Bissaka, Barkley and Pedro were left in space – but the United players demonstrated an impressive understanding of covering each other’s spaces, and Scott McTominay excelled in anticipating danger.

Chelsea responded to Rashford staying high when out of possession by pushing Azpilicueta further forward, but as United moved deeper Chelsea found there was minimal space for them to penetrate and instead had to pursue crossing opportunities that were well defended. Frank Lampard eventually responded with the introduction of Olivier Giroud, but United doubled their lead as the striker was waiting to come on and extended it almost immediately after his arrival.

United retained their 4-2-3-1 shape, led by Anthony Martial, while Chelsea had possession. Martial sought to press the central defender in possession and shut off the other side of the pitch, while Lingard and Rashford would press their respective full-backs, depending on which side play was unfolding. If Andreas Pereira focused on Jorginho and Paul Pogba on Kovacic, McTominay occupied Mount. Harry Maguire and Victor Lindelöf shared responsibility for Tammy Abraham, with the spare central defender assisting Shaw with Pedro or Wan-Bissaka with Barkley.

When Chelsea were able to switch possession between their central defenders, Martial struggled to cover the necessary ground, so Rashford then pressed Andreas Christensen or even Kepa. This ultimately freed up Azpilicueta, but despite some early vulnerability down that flank United looked increasingly comfortable out of possession as the game wore on.

Maguire and Lindelöf remained sufficiently tight to Abraham to prevent him from receiving to feet and turning, while McTominay covered his teammates when they defended in wider areas. United restricted Chelsea’s space and therefore opportunities to penetrate, forcing them to commit further players forward and leaving them vulnerable to the transitions that cost the visitors so dearly in the second half.