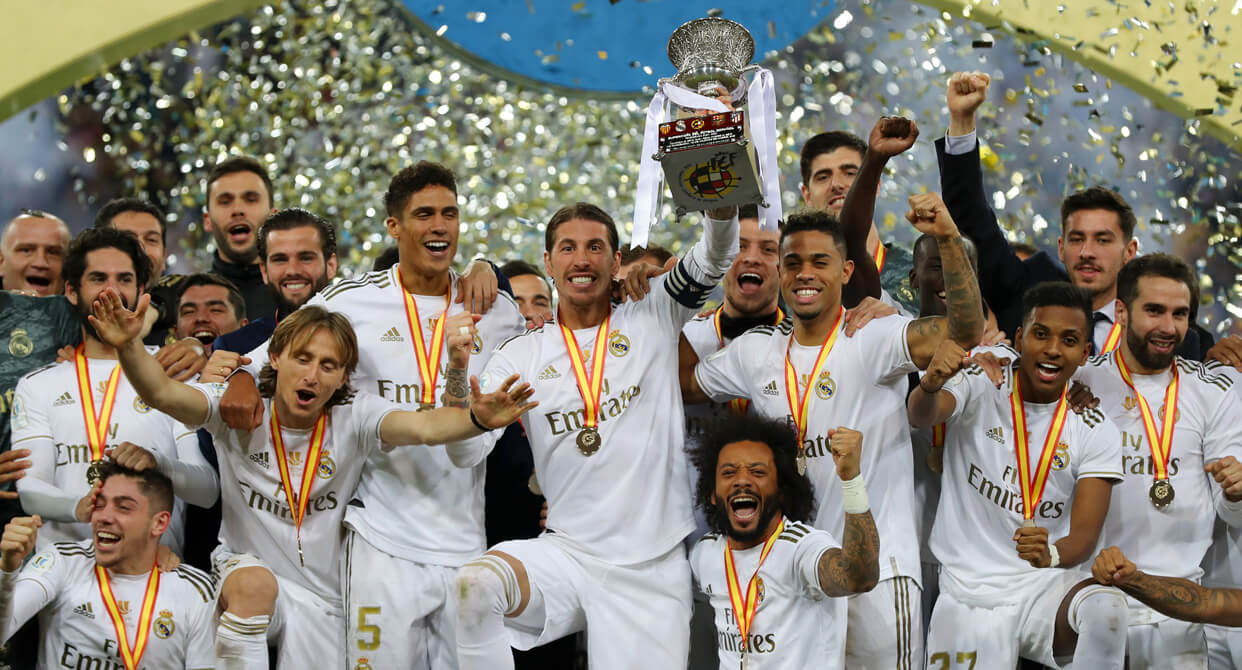 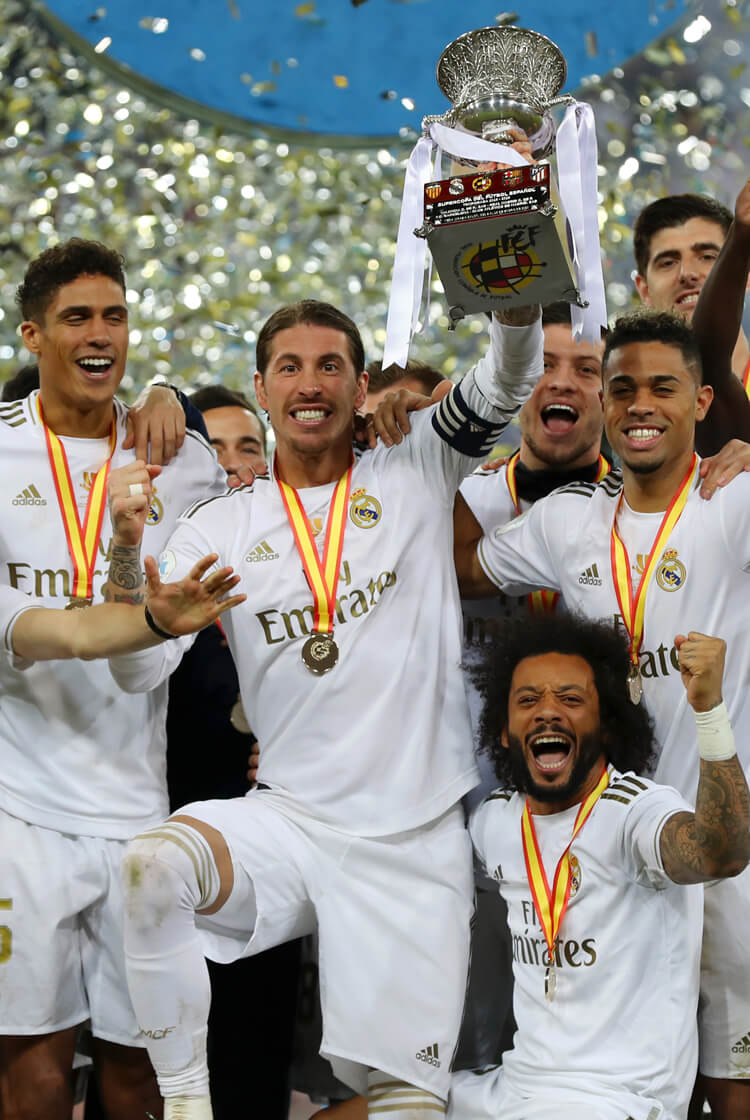 Real Madrid won the first Spanish Super Cup since the competition was reformatted, defeating rivals Atlético Madrid 4-1 on penalties after a 0-0 draw in Jeddah, Saudi Arabia. They were reduced to 10 men in stoppage time when Federico Valverde cynically fouled Álvaro Morata, but Thibaut Courtois saved Thomas Partey's penalty after Saúl Ñíguez's had already struck the post, inviting Sergio Ramos to secure victory by scoring their fourth from four.  "We're proud to have competed," said Atlético's manager Diego Simeone. "(In Real and Barcelona) we played the two best teams in the world in three days and competed very well. It makes us want to keep improving. We had several chances to score, particularly towards the end of the game. We played better than against Barcelona." "At half-time, we didn't know how to get closer to goal, but we had patience," said his opposite number Zinedine Zidane. "Winning a trophy is never easy and even less so against Atlético." 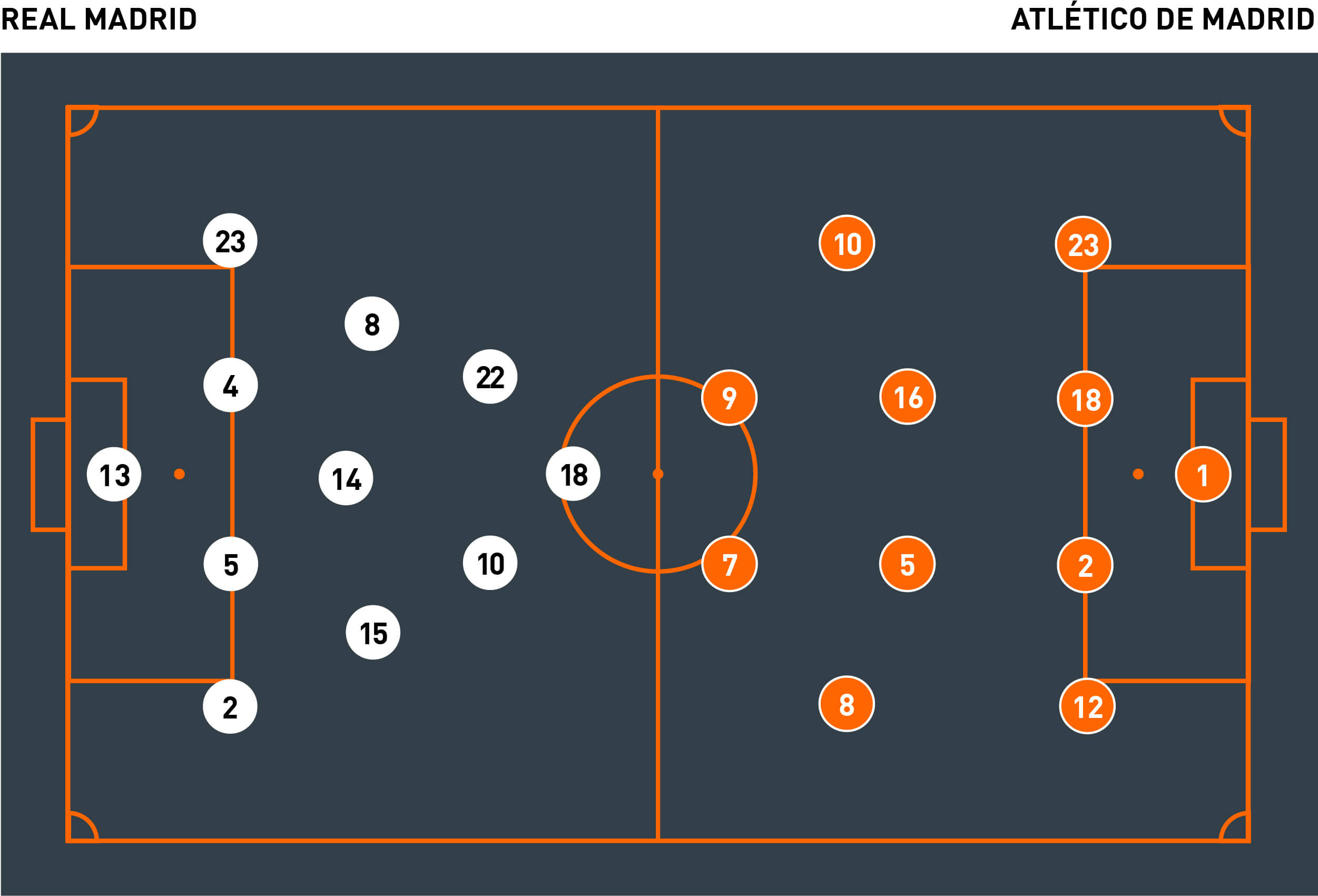 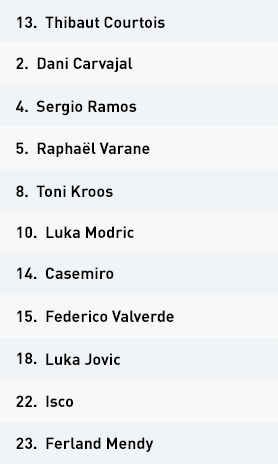 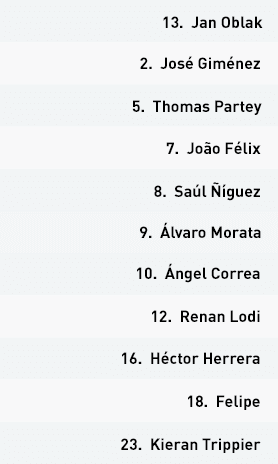 Similarly to in their semi-final victory over Valencia, Real Madrid were organised by their manager Zinedine Zidane into a 4-5-1 formation when they had possession – largely because it allowed them to select five central midfielders in Casemiro, Federico Valverde, Toni Kroos, Luka Modric and Isco. Their rivals Atlético Madrid also retained the same approach they used when beating Barcelona at the same stage, with a 4-4-2.

Real attempted to take the initiative with possession, through using their mobility to penetrate beyond their opponents' defensive lines; Valverde remained close to the right, Isco to the left, and Modric was given greater freedom from central midfield. Despite that it was Atlético who largely dictated the game's rhythm, which was mostly slow, beyond the occasions it intensified after they had regained possession in an advanced position, or when Real succeeded in overcoming the first line of their press and then advanced into the spaces that existed beyond it. In the earliest phases of that possession Real also took risks, when building up via combinations and attempting to draw their opponents' press.


Real's shape unsettled Atlético's full-backs, who often prioritise advancing in pursuit of their opposing wingers but became uncertain over whether they should instead press Real's full-backs, who largely operated in the attacking half. When they did they received possession in static positions, which undermined their potential, but they were able to offer overloads that stretched Atlético and created spaces – Dani Carvajal demonstrated that when he moved into a narrower position to offer Valverde a further passing option when he was wide. Their set-pieces also troubled Diego Simeone's team, either if they delivered balls directly into the penalty area, or if their approach was more elaborate.

Atlético posed a greater attacking threat when extra-time first started, when they also appeared fresher than Real, and they therefore enjoyed improved spells of possession. Los Blancos' midfield also struggled for the same mobility they were once able to offer, so they became more static, and struggled in the absence of the passing options they had previously had. Crosses into central areas consequently became their favoured approach.

Owing to that, Kroos was replaced by Vinícius Júnior, and they reorganised into a 4-3-3. Vinícius and Rodrygo offered width and pace, but were ultimately still unable to create a winning goal.

Diego Simeone's Atlético Madrid retained their favoured 4-4-2 formation, led by the promising front two of João Félix and Álvaro Morata. Real Madrid were defending with a 4-1-4-1, in which Casemiro operated as the single pivot from the base of midfield.

Their shape was largely compact, in an attempt to discourage Real from playing passes inside, and also to quickly recover possession and then transition into attacks before their opponents could recover their defensive positions. They otherwise also sought to control the game's tempo, which they mostly kept relatively slow.

Both teams were particularly wary of making mistakes, as the first half regularly demonstrated. It was an error Real made in the initial stages of an attempted build-up, complemented by Atléti's press, that created a goalscoring chance for Félix. With Saúl Ñíguez often competing with Dani Carvajal, Simeone's team attempted to play directly both to him, owing to their confidence in him winning their aerial battles, and via switches of play to their full-backs – even if they remained short of possession.

If the second half unfolded at a similar tempo, much of it did so within Atléti's half. Simeone responded by introducing Vitolo, largely in an attempt to capitalise on the risks Real's defence were taking in making Sergio Ramos and Raphaël Varane responsible for covering a significant area of the pitch. Rodrygo replaced Isco as Zinedine Zidance sought to create space and to increase his team's width, but they were confronted by opponents who continued to defend well and with numbers, both in front of the penalty area and on both sides of it.

Atlético began to pose a more consistent attacking threat during extra-time, in an apparent attempt to capitalise on the fact that Real were tiring, and to avoid penalties. For the first time they had more consistent periods of extended possession, while retaining their preferred defensive structure. A mistake from Real later invited Atlético to attack on the counter but, when Morata was pursuing a one-on-one against Thibaut Courtois, Federico Valverde cynically fouled him outside of the penalty area, ultimately ensuring penalties.