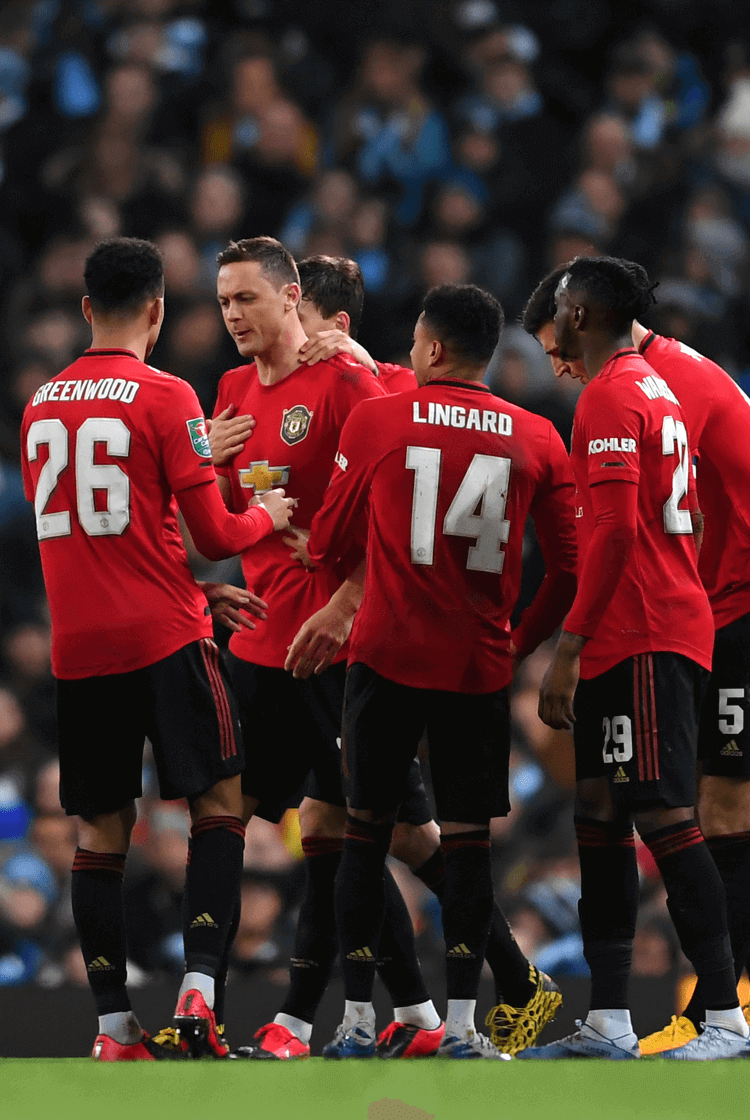 Manchester City progressed to the League Cup final, where they will meet Aston Villa, after their defeat by rivals Manchester United gave them a 3-2 aggregate victory. Despite largely controlling possession they too rarely threatened on goal, and therefore proved incapable of cancelling out Nemanja Matic's first-half finish, even after the midfielder was later sent off. United restored some pride after being so convincingly outplayed during the first leg, and their manager Ole Gunnar Solskjaer said: "We have come a long way. Even though we did not create too many clear cut chances, we pressed them back. It pleased me." His opposite number Pep Guardiola, desperate to secure silverware given their grasp on the Premier League title is loosening by the week, said: "Over 180 minutes we were better than United. We created chances to score a lot of goals and didn't convert. We need to learn to be more clinical. We played a side with incredible physicality. The goal was from a set-piece. The first time they shot on target. In both games, we were better." 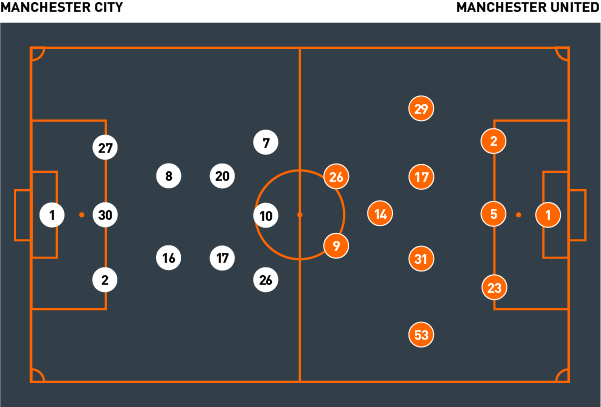 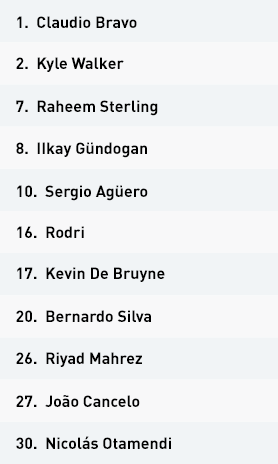 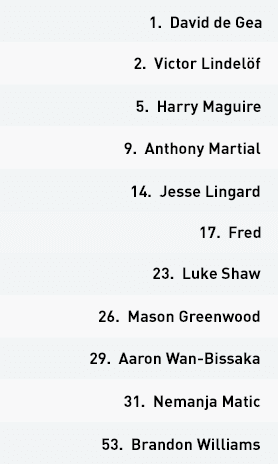 Pep Guardiola instructed Manchester City to play with a less-familiar three-box-three formation, built on the four-strong midfield provided by Rodri, Ilkay Gündogan, Bernardo Silva and Kevin De Bruyne. Their visitors, Manchester United, operated with a 5-3-2 while they were defending, through wing-backs Aaron Wan-Bissaka and Brandon Williams withdrawing into defence, and Jesse Lingard into central midfield.

That they led 3-1 from the first leg contributed to their priority being to control possession, and to frustrate United when they were attempting to build momentum. They therefore regularly circulated the ball acorss their defence, in an attempt to draw United's mid-block; their midfield also offered a four-on-three overload that invited them to play through United's midfield, or into the spaces that existed elsewhere.

De Bruyne and Silva often drifted to outside of United's midfield, in an attempt to draw Wan-Bissaka and Williams and therefore to create spaces for Raheem Sterling and Riyad Mahrez; diagonal rotations between those four were also used to unsettle their opponents, and ultimately to pursue further spaces in more advanced territory. Anthony Martial and Mason Greenwood were instructed to screen passes towards Rodri and Gündogan, but the three-on-two overload City regardless had in the first line of their build-up meant that they struggled to do so while also covering the necessary ground they needed to when their opponents circulated the ball.


João Cancelo regularly advanced from central defence with possession, in an attempt to draw an opponent away from a teammate; with the ball on one side of the pitch play would be switched to the far-side central defender. Yet, for all that they dominated the ball, City struggled to create regular, quality goalscoring chances, because their only successes in advancing beyond United's defence came via clipped passes from deeper territory.

Their ongoing ability to move the ball forced United to defend the entirety of the pitch, instead of from within their own half, as their mid-block suggested they had intended. They offered the most potential when creating overloads within midfield to draw their opponents before moving it, but towards the final third their usual ruthlessness was absent. Too often they were not as fluid and incisive as they were capable of being; had they been more clinical they likely would have won.

Manchester United were organised by their manager Ole Gunnar Solskjaer into the 3-4-1-2 formation he increasingly favours against stronger teams, featuring Jesse Lingard as their number 10 behind Mason Greenwood and Anthony Martial. They were content to concede possession and to prioritise counter-attacks against opponents adopting an intense, man-oriented press and a cautious mid-block, in a variety of shapes, while they were defending.

They struggled to find Greenwood and Martial in advanced positions during the first half, contributing to both withdrawing into midfield to instead attempt to contribute to the build-up of possession. When they started from De Gea, United overloaded one side of the pitch – often via their back three – but Manchester City responded by moving to cut off that side of the pitch through the pressing angle pursued by Sergio Agüero.

They also sought to apply intense pressure to those around the ball to draw mistakes, contributing to multiple turnovers in United's defensive half. It was after struggling while in possession throughout the opening half hour that the visitors had greater success, through Jesse Lingard drifting towards the left wing, where he would combine with Luke Shaw and Brandon Williams, and Williams and Aaron Wan-Bissaka providing outlets when Nemanja Matic and Fred were building play from midfield.

Matic and Fred played diagonal passes towards the relevant far-side wing-back, in their pursuit of spaces outside of City's central defenders, ensuring that City had to remain disciplined, and on occasion that Riyad Mahrez and Raheem Sterling were required to track back to almost form a back five. Even if the hosts' willingness to commit tactical fouls contributed to set-pieces from which United occasionally threatened, Solskjaer's team struggled to attack on the counter, and to build momentum. Pep Guardiola's also managed transitions reasonably well, regularly offering numbers around the ball, beyond those tactical fouls.