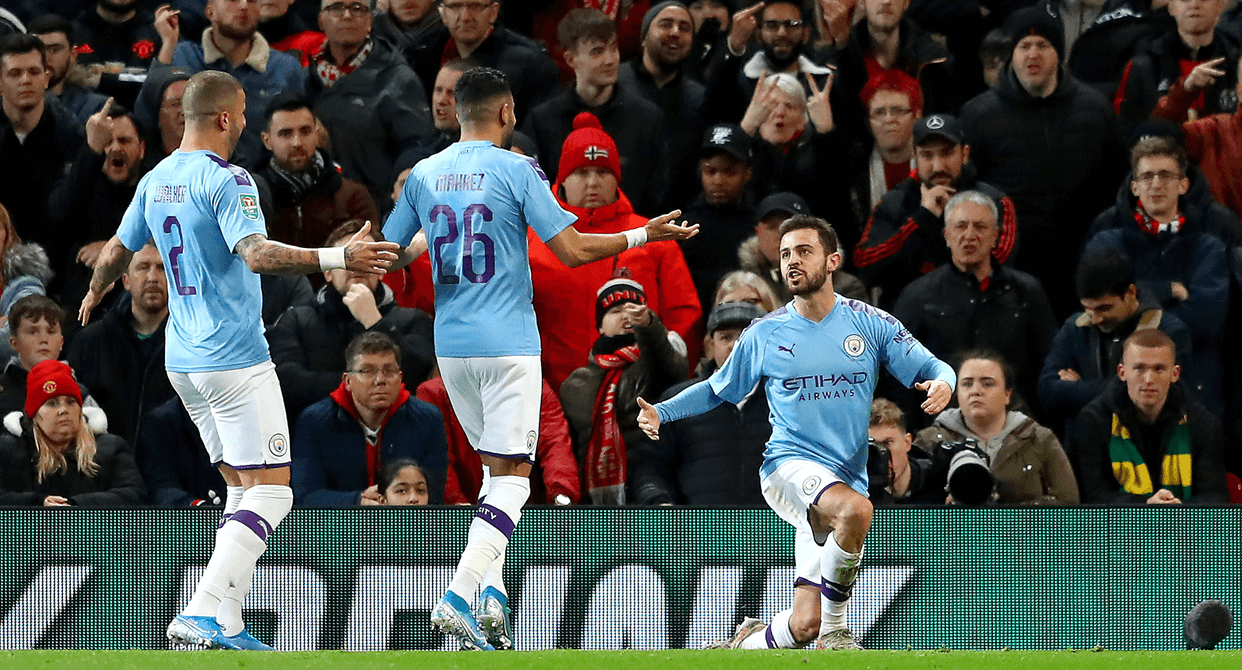 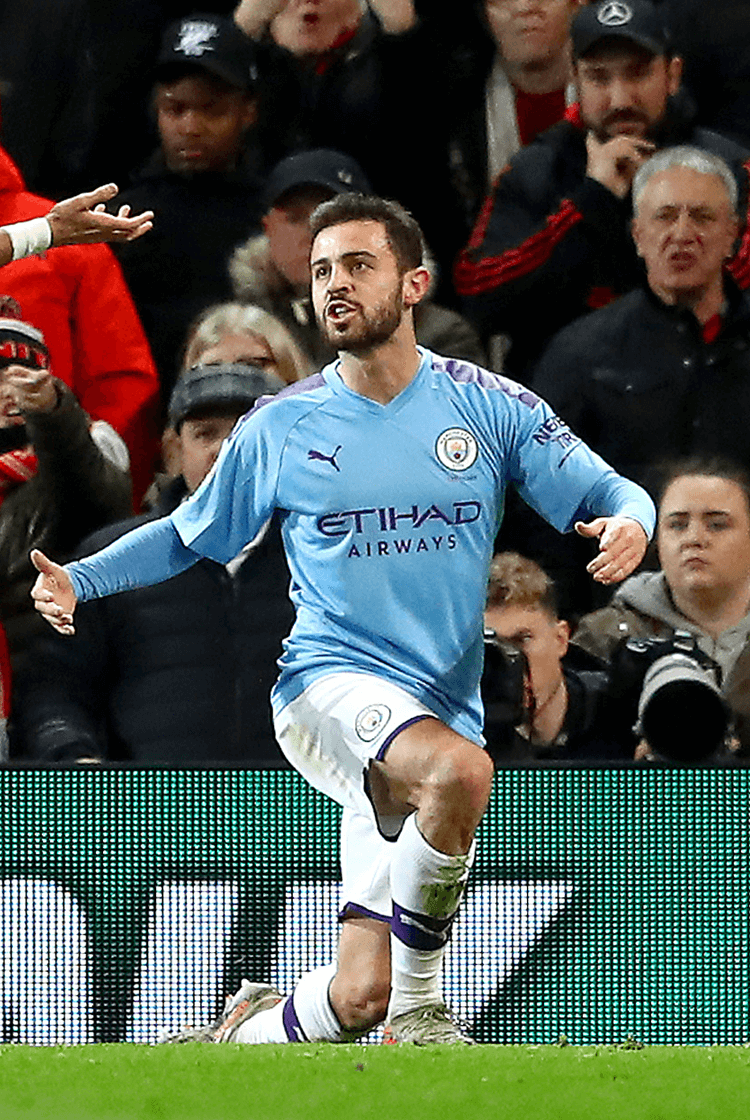 Manchester City built a convincing lead to take into the home leg of their League Cup semi-final against Manchester United when first-half finishes from Bernardo Silva and Riyad Mahrez were complemented by an own goal from Andreas Pereira as they secured victory at Old Trafford. Marcus Rashford's goal during the second half regardless offered the hosts hope of yet eliminating their rivals – who also won last season's competition – and potentially winning the trophy that could ensure their 2019/20 is considered a success. "From 15 minutes to half-time was the worst we have played this season," said United's manager Ole Gunnar Solskjær. "We couldn't cope with the setback. Now we have a steep mountain to climb. We've shown before we have been down from a home tie and turned it around. Paris Saint-Germain is the latest example and we have to believe that we can put on a performance." "Of course Manchester United can come back," said his City counterpart, Pep Guardiola. "Last year here they lost to Paris Saint-Germain and qualified. They have the shirt which means history and pride." 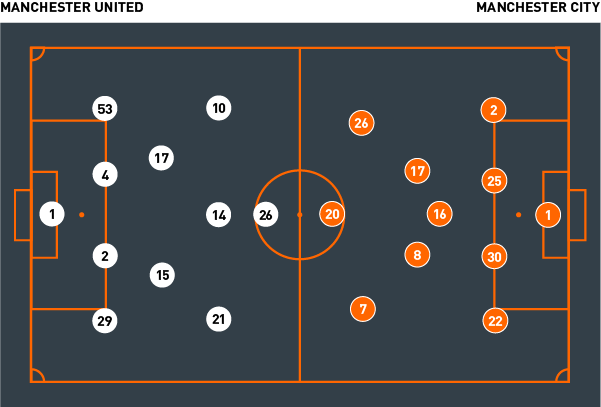 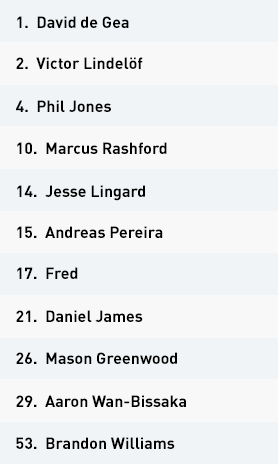 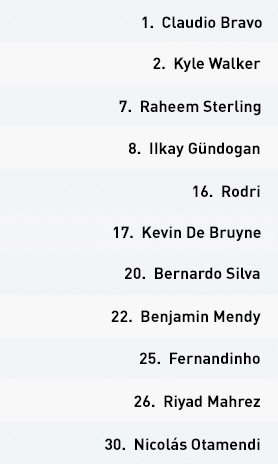 Ole Gunnar Solskær again organised Manchester United into a 4-2-3-1 formation, on this occasion led by the front four of Daniel James, Andreas Pereira, Marcus Rashford and Mason Greenwood, who started as their central attacker. Manchester City's attack while they adopted a 4-4-2 was similarly experimental; Kevin De Bruyne would advance from midfield to join Bernard Silva in a front two, when Raheem Sterling and Riyad Mahrez would withdraw into midfield.

United struggled to build attacks throughout the first half. The teams' formations invited the hosts to build a three-on-two overload in central midfield, but their rigid positioning meant that they rarely did so. Lingard often represented the free number, but he offered too little movement when passing lines were required, and the combined efforts of Silva and De Bruyne deprived central defenders Phil Jones and Victor Lindelöf the time and space they needed to play passes through City's midfield.

The spaces behind City's defence were instead prioritised, via their attackers' pace. During transitions they demonstrated potential, but City were both balanced and defensively sound, so their efforts led to little. When Nemanja Matic replaced Lingard for the second half and Pereira instead became their attacking midfielder he offered superior movement and variety and they therefore had greater success, partly because City pressed with a reduced tempo having built a three-goal lead.


Similarly to Silva for City, Greenwood began to withdraw towards possession which, given City's reluctance to follow him and therefore invite Rashford and James to advance, offered an alternative amid United's attempts to progress beyond midfield. The visitors became more compact in central areas, so Solskær's team instead targeted the spaces behind their wide midfielders; those behind Sterling were particularly inviting, because his recovery runs during the second half were less intense and two-on-ones against Benjamin Mendy could be pursued.

The second half was significantly more competitive. United's attacks offered more, but City's reduced intensity contributed much to that outcome.

Manchester City were set up into a 4-3-3 formation, led by Bernardo Silva operating as a false nine, by their manager Pep Guardiola. Their shape, through Raheem Sterling and Riyad Mahrez playing as wide forwards, often resembled a four-diamond-two against Manchester United's 4-2-3-1, which regularly became a 4-4-2 while they were defending.

Silva's positioning consistently unsettled United. His freedom to roam invited him to create four-on-three or four-on-two – depending on Jesse Lingard's positioning – overloads, so they therefore regularly bypassed United's ineffective press and penetrated within central areas. Even when Lingard was asked to adopt a deeper position to create a five-strong midfield, City continued to create those overloads.

Kevin De Bruyne and Ilkay Gündogan succeeded in stretching midfield, supporting play and making penetrative runs from deep territory, often through positioning themselves in half-spaces or between the relevant opposing full-back and central defender. When Victor Lindelöf and Phil Jones responded by following them to prevent them – or Mahrez and Sterling – from turning, their fellow defenders remained in the same territory, creating large spaces against one of the world's finest attacks.

United's wide midfielders were drawn into central positions to challenge City's dominance there, but that created further spaces out wide, where Mahrez and Sterling could combine to create two-on-ones with full-backs Kyle Walker and Benjamin Mendy. A further complication in their attempts to defend came on the right, where De Bruyne, Mahrez and Walker rotated. In addition to the intense levels of concentration the visitors demanded from United's defenders, they had to time passing those opponents to each other at the correct moment to avoid being caught out of position.

Ole Gunnar Solskær’s team consistently struggled to solve the problems they were being presented with, and to the extent that City could have led at half-time by an even wider margin than 3-0. That Guardiola's was so effective during transitions, complemented by the spaces they had to play into and United's lack of care in possession, often led to them advancing beyond United's defence within the first two passes of the transition. In the second half they played with a reduced tempo, and less ambitious movement, to instead prioritise managing their evening.