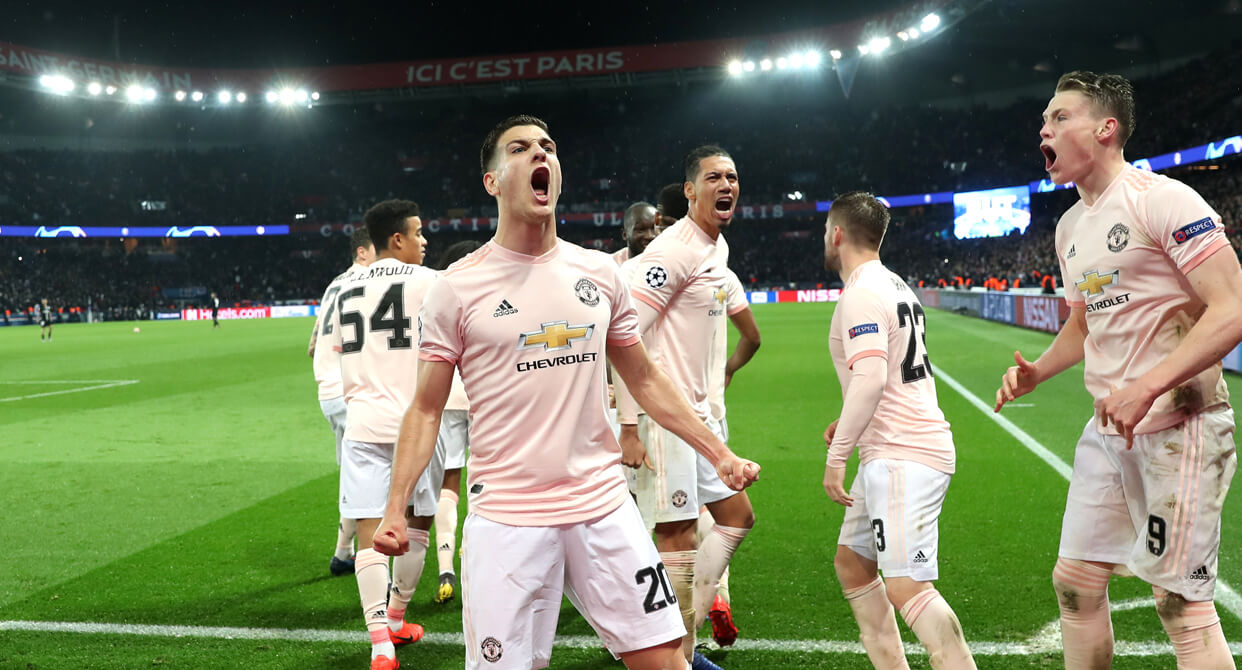 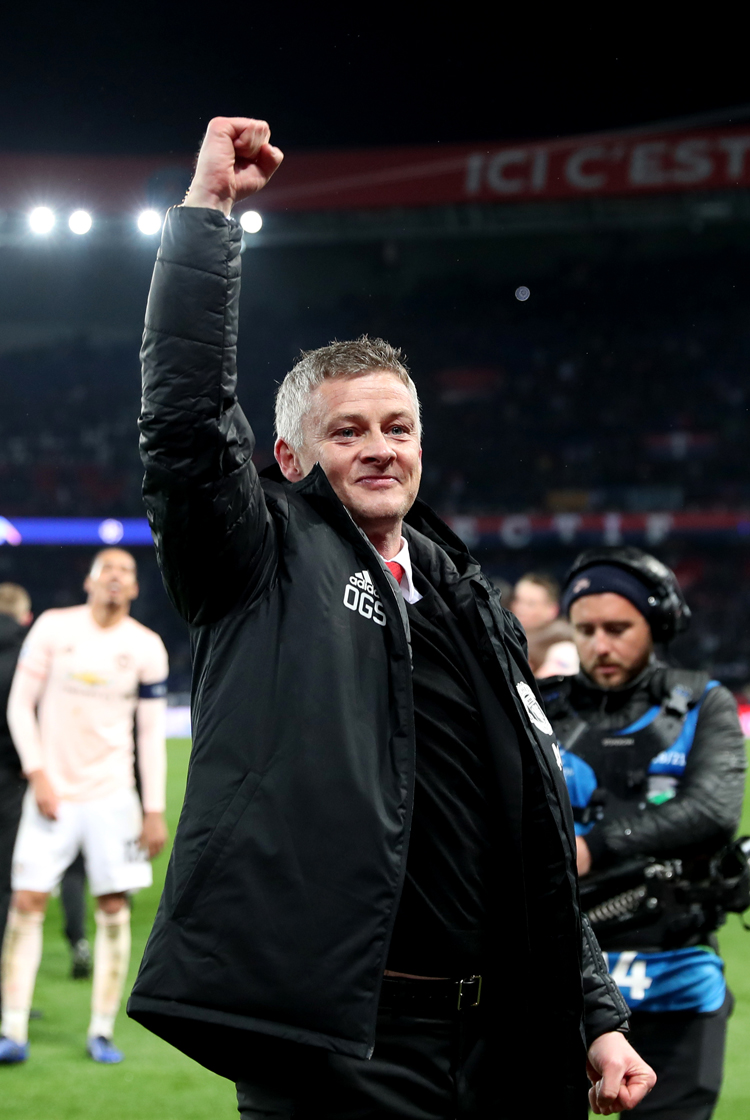 The Ole Gunnar Solskjaer wonder story continues apace, with a remarkable second-leg turnaround in Paris leaving an injured Neymar stunned on the sidelines and seeing Manchester United beat an unlikely path into the last eight of the Champions League. Needing to overturn a 2-0 deficit from the first leg at Old Trafford - and missing a number of key players, including the suspended Paul Pogba – United got off to a flying start with a second-minute strike from Romelu Lukaku. Their job looked impossible once more when Juan Bernat equalised 10 minutes later, but Lukaku took advantage of a mistake by the veteran goalkeeper Gianluigi Buffon to slide home his second on the half-hour mark. PSG dominated a second half generally lacking in quality, but were unable to kill the tie and paid for it when Marcus Rashford smashed home a hotly disputed VAR-awarded penalty in the fourth minute of added time. The debate over the handball rule will go on – as does United's Champions League campaign. 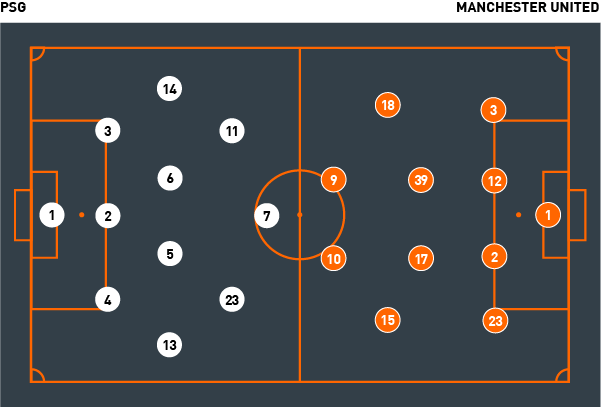 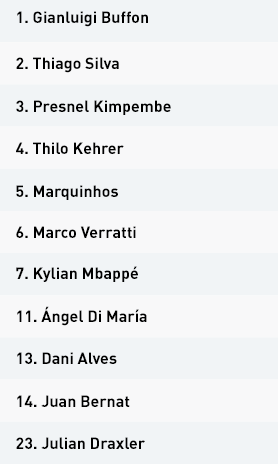 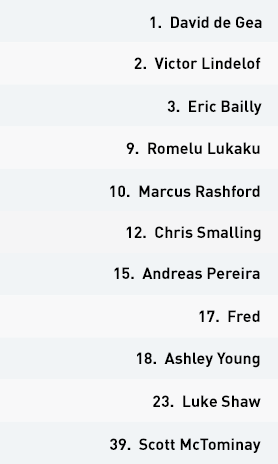 Thomas Tuchel set Paris Saint-Germain up in a 3-4-3 formation in possession, with Juan Bernat and Dani Alves providing attacking width from wing-back, and Julian Draxler and Angel Di Maria occupying the spaces between Manchester United’s full-backs and centre-backs. The hosts repeatedly attacked around the sides of United’s 4-4-2 block, bombarding the penalty area with early crosses.

The positioning of both Alves and Bernat often pulled the visitors’ full-backs away from the back line, creating gaps in the inside channels. Whenever United’s back line failed to slide across and cover, both Di Maria and Draxler had space to receive and attack inside. Having fallen behind to Romelu Lukaku’s early strike, PSG’s general dominance of the ball saw them respond quickly – but it was forward Kylian Mbappe who delivered the cross in behind for Bernat to tap home at the far post.

United responded by trying to drop their wide midfielders in to help their full-backs, but Di Maria then took up a much wider role on the left with Bernat dropping deeper. This kept right-sided midfielder Ashley Young away from the ball, allowing Di Maria to attack the uncomfortable Eric Bailly one on one. The Argentine could then cross into the area, where Dani Alves would be joining Mbappe and Draxler, with one of Marquinhos or Marco Verratti joining from deep. In the end, Young was forced to drop back and support Bailly, who was eventually replaced by Diogo Dalot late in the first half.

Di Maria moved into a more central role for the second half, with Verratti also stepping higher as an extra player between the lines and the wing-backs once again attacking around the sides of the United block. Although this gave the visitors more space in transition, they struggled to break out to any significant amount as PSG dominated the ball.

Despite all their attacking possession, Di Maria’s offside goal and Mbappe’s rounding of David de Gea – which led to Bernat hitting the outside of the post – were the hosts’ only real central penetrations of quality in the second half. Despite working the ball into their wing-backs countless times, PSG couldn’t find any consistent connection between cross and runner. In truth, it was a tame attacking performance in the absence of Neymar and, until the dying seconds, Edinson Cavani.

Out of possession, the hosts generally set up in a 4-4-2 mid-block, with Thilo Kehrer – whose desperate mistake led to Lukaku’s opener in the second minute – moving to right-back and Bernat dropping to left-back, with Thiago Silva and Presnel Kimpembe in between. Draxler remained high to support Mbappe, with Di Maria and Dani Alves tucking in alongside Verratti and Marquinhos in midfield.

With United so rarely in possession, PSG spent little time in this structure – although they still managed to concede a second during the visitors’ one major spell on the ball in the first half. With United briefly switching to a 4-3-3, Marcus Rashford drifted in from the left and away from Kehrer. As PSG already faced a central overload, Rashford was left free to shoot at Gianluigi Buffon, who followed up Kehrer’s early mistake with one of his own in spilling the ball for Lukaku to slide home his second.

The hosts dominated most of the second half, but with Verratti pushing forward ahead of the ball, they found it harder to block early United balls forward in transition. This didn’t cause them too many problems, as United struggled to get serious numbers forward; but, as it looked like PSG would just about see out the game, Kimpembe was adjudged – with the help of VAR – to have handled Dalot’s speculative late shot in the area. Rashford hammered home the resulting penalty as Tuchel’s men completed a disastrous evening of defensive errors and crashed out of the Champions League in the last 16.

Ole Gunnar Solskjaer set Manchester United up in a defensive 4-4-2 structure and with a clear gameplan. They were to quickly transition from that shape in to forwards Romelu Lukaku and Marcus Rashford, who positioned themselves in the gaps between PSG’s adapted back three.

United attacked in the same 4-4-2 formation, with Andreas Pereira initially supporting from the left. As soon as the visitors looked certain to regain possession, however, Rashford would begin to drift to the left. With Lukaku pinning Thiago Silva, United either looked in behind for Rashford to attack the seemingly uncomfortable Thiro Kehrer, or for Lukaku to hold up play and wait for further runners.

Ashley Young’s deeper positioning on the right of midfield helped deal with the threat of Angel Di Maria, but limited any attacking presence from the United right. On one of the rare occasions Young was able to get high on the right, thus pinning the PSG defence into a back four, Rashford found the space inside to unleash the shot Gianluigi Buffon fumbled into the path of Lukaku for United’s second on the night.

United had more opportunity to counter-attack in the second period, with PSG pushing extra players forward, but their lower block meant they rarely had the numbers to take full advantage of their opponents’ expansive set-up. In the end, it was a controversially awarded late Rashford penalty that secured a dramatic 3-1 victory and progress on away goals. Solskjaer’s magic touch seems to be going nowhere, with the clamours for his appointment to the job permanently rising by the day.


United set up in a 4-4-2 mid-block, with Young on the right of midfield and Eric Bailly at right-back. They had immediate issues against the width of PSG’s attacking structure, with both Bernat and Dani Alves attacking around the sides of their block. To nullify this, both full-backs – Bailly and Luke Shaw – aggressively stepped across and were comfortable when one on one.

However, it was the space behind the full-backs that became a major issue. Whenever Young or Pereira failed to cover behind, PSG found Draxler and Di Maria free to cross from these areas for Kylian Mbappe or the far-side wing-back. Once the United midfielders dropped back to help limit this threat, runs from Mbappe or one of the deeper-lying midfielders gave them something else to worry about – and it was from a run in behind that Mbappe squared for Bernat to get in behind the slow-thinking Bailly and equalise from close range.

Bailly’s vulnerability at right-back was highlighted by Di Maria’s repeated crosses into the area after moving wider on the left; despite Young’s dropping to support him, the Frenchman eventually limped off to be replaced by Diogo Dalot – although not before United’s shock second had knocked the momentum out of the PSG attack.

Young dropped into right-back himself for the second half, and sat as part of a permanently low block against opponents who were starting to throw more men ahead of the ball. Di Maria’s offside strike was a timely reminder of the quality PSG had in tight areas – but, beyond one Bernat shot that rebounded off the post, United never looked in that much trouble at the back. This was a generally impressive defensive display that set the team up to cause an eventual shock at the other end of the pitch – who knows how far they can go?