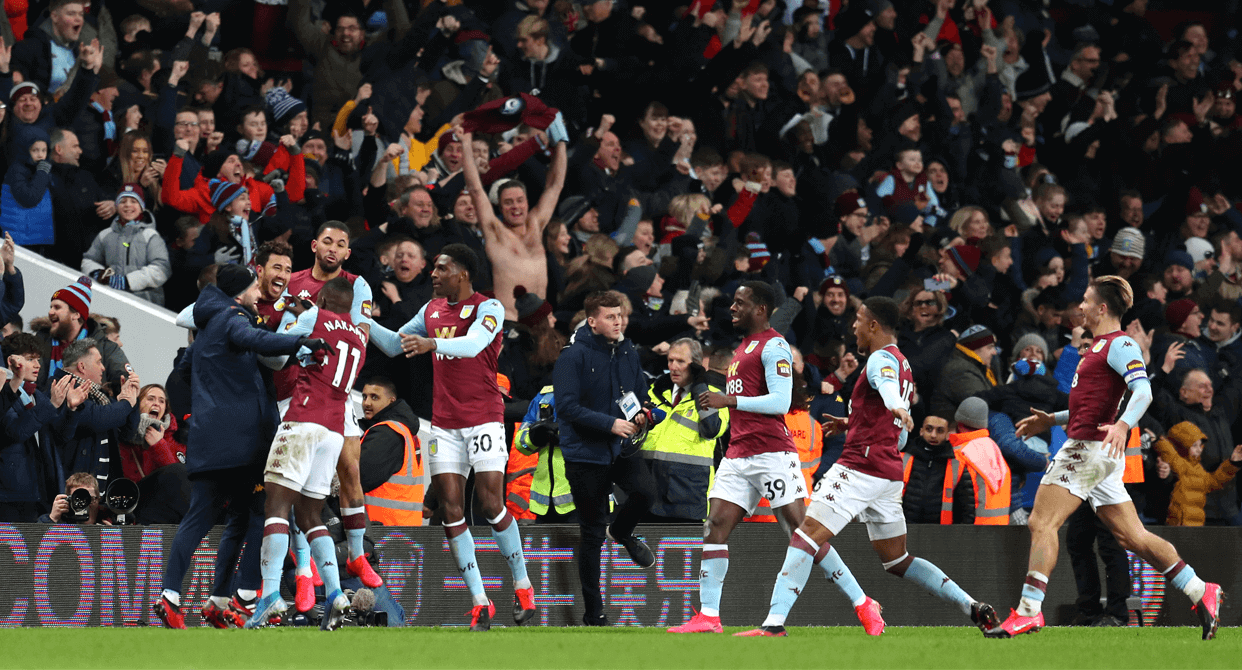 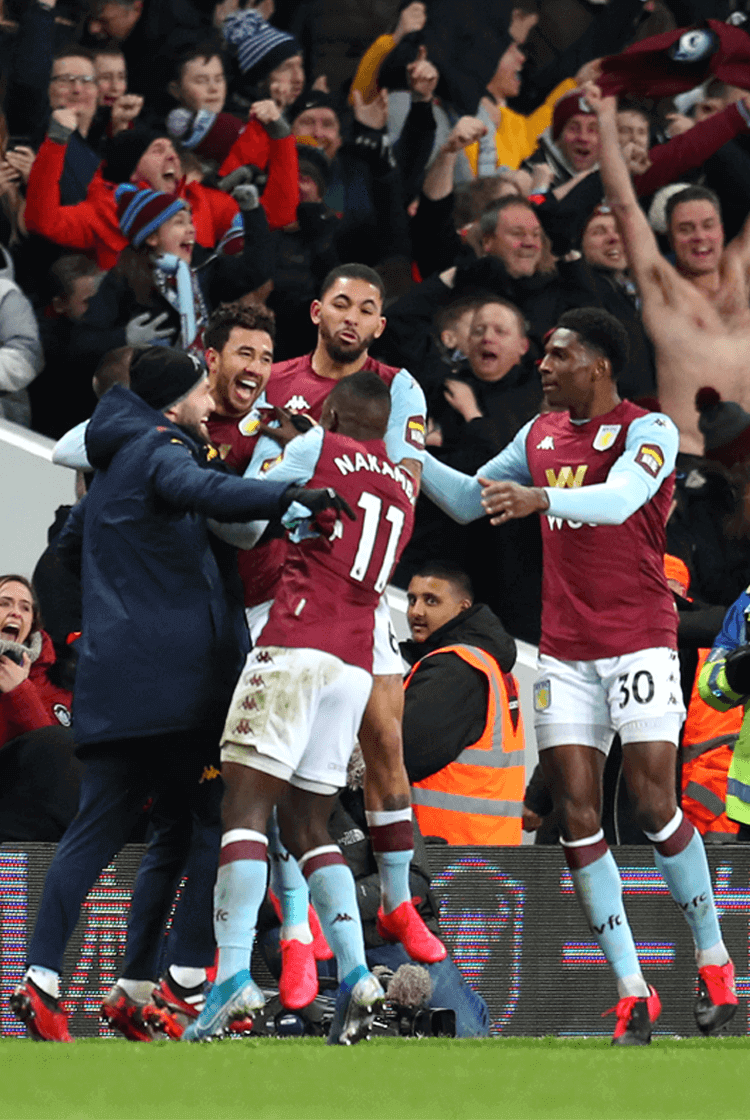 Aston Villa advanced to the League Cup final when Trézéguet's stoppage-time finish secured victory over their Premier League rivals Leicester City. Largely inspired by their captain Jack Grealish, they took the lead during the first half through Matt Targett, and remained in front untl the 72nd minute when Kelechi Iheanacho scored Leicester's equalising goal. After a period in which Villa manager Dean Smith had come under significant pressure, he has led his team to the verge of silverware. "To go and get the win at the death like we did there, to take this club to Wembley, I'll be a very proud man to walk out there with this team," he said. "I certainly let myself go with the goal. That deep into stoppage time there was a bit of emotion from everyone and the place erupted. Our goalkeeper made three great saves but I thought we were aggressive as well." His opposite number Brendan Rodgers, who was also denied an FA Cup final appearance by Villa when managing Liverpool in 2015, said: "We were excellent. Their goalkeeper made some outstanding saves. We had a nice control in the game. By the end I thought only one team looked like they were going to win it." 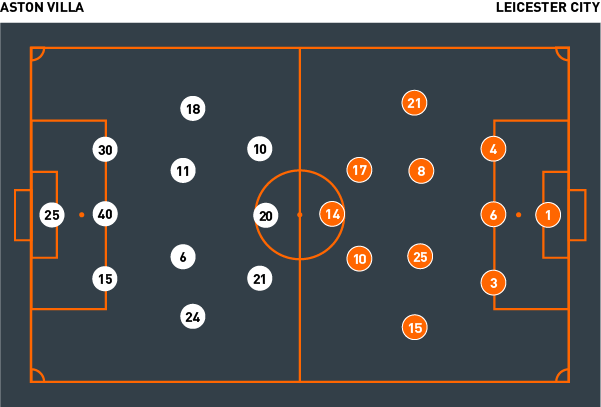 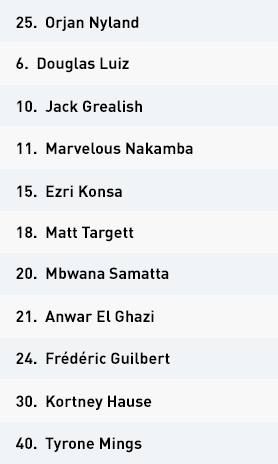 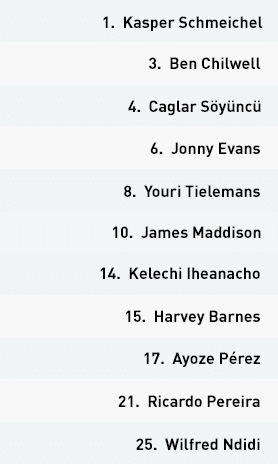 Aston Villa were organised by their manager Dean Smith into a 3-4-3 formation while they were in possession – when they prioritised attacking during transitions. Their counter-attacks, often led along the left by Jack Grealish against Caglar Söyüncü, posed a consistent threat.

Leicester City's right wing-back Ricardo Pereira regularly advanced, inviting Grealish to capitalise on the time and space he was therefore afforded by working possession into dangerous positions, where he was often supported by Matt Targett in his attempts to work around Leicester's defence. It was one such combination that led to Targett giving Villa the lead, but they were thereafter often forced to defend.

Through their wing-backs withdrawing into defence they alternated between a 5-2-3 and 5-4-1 while they did so. They initially struggled to prevent Leicester finding James Maddison and Ayoze Pérez; when Grealish and Anwar El Ghazi advanced to press Leicester's defence, Douglas Luiz and Marvelous Nakamba had to follow their movements, encouraging Maddison and Pérez to receive between the lines and leading to several goalscoring chances.


It took wider central defenders Ezri Konsa and Kortney Hause advancing to inhibit their freedom, so Leicester adjusted through Ben Chilwell pushing forward from central defence to create overloads towards the left wing. It was when Villa successfully defended against those that they then had spaces elsewhere to attack during transitions. Grealish increasingly adopted narrower positions at earlier stages of those potential attacks, inviting Targett to move into space and play crosses; he also used the freedom he was afforded to feed those making runs from central positions.

Villa applied pressure further forwards and for longer periods during the second half – largely through their front three and wing-backs advancing and Douglas Luiz and Marvelous Nakamba prioritising Youri Tielemans and Wilfred Ndidi – leaving their visitors short of an option in central midfield after choosing to instead play with a second striker. Brendan Rodgers' team therefore often abandoned their build-up patterns for a more direct approach.

Little changed, incidentally, after Leiceser's equalising goal. Encouraged by their approach, Villa continued to apply pressure during transitions; spaces also increasingly appeared around their opponents' central defence as Pereira and Chilwell advanced as they sought a winning goal, contributing to that scored by substitute Trézéguet.

Visitors Leicester City started with a back three, through their manager Brendan Rodgers favouring a 3-4-2-1 formation led by lone striker Kelechi Iheanacho. The positoning of Wilfried Ndidi and Youri Tielemans at the base of midfield drew Aston Villa's midfield forwards, creating space for James Maddison and Ayoze Pérez to provide the link between midfield and attack and to threaten and often test goalkeeper Orjan Nyland from within the inside channels.

It was regardless Villa who took the lead, despite Leicester posing the more consistent threat, when their favoured route of attack via Jack Grealish and Matt Targett towards the left led to a goalscoring chance for the latter, after which Rodgers' team were often frustrated by Villa's increasingly proactive defence. When Ben Chilwell advanced from his role within the back three, to draw Ahmed El Ghazi and to create overloads towards the left, the hosts' shape regularly became a 5-4-1.

During the rare periods in which Villa enjoyed lengthier spells of possession Leicester also adopted a 5-4-1 block, through Harvey Barnes and Ricardo Pereira withdrawing into defence. Against Villa attempting swift attacks, often via direct balls, they were able to make numerous regains, but Maddison and Pérez became less influential.

Maddison therefore started to withdraw to in front of Villa's midfield, aware that their defenders would be reluctant to follow him which, complemented by the blindside movements made by Tielemans, created a new passing option in a central position. If that briefly brought success, the increased pressure Villa were applying again undermined them.

A passing line into Iheanacho remained, but it was one they struggled to take advantage of. Lacking the further option they therefore required to reach the final third Leicester actually scored their equalising goal when their hosts were unable to recover possession after a higher press. Amid their ongoing lack of passing options they struggled to maintain a consistent attacking threat, contributing to the hosts regaining possession, and eventually scoring their winning goal.