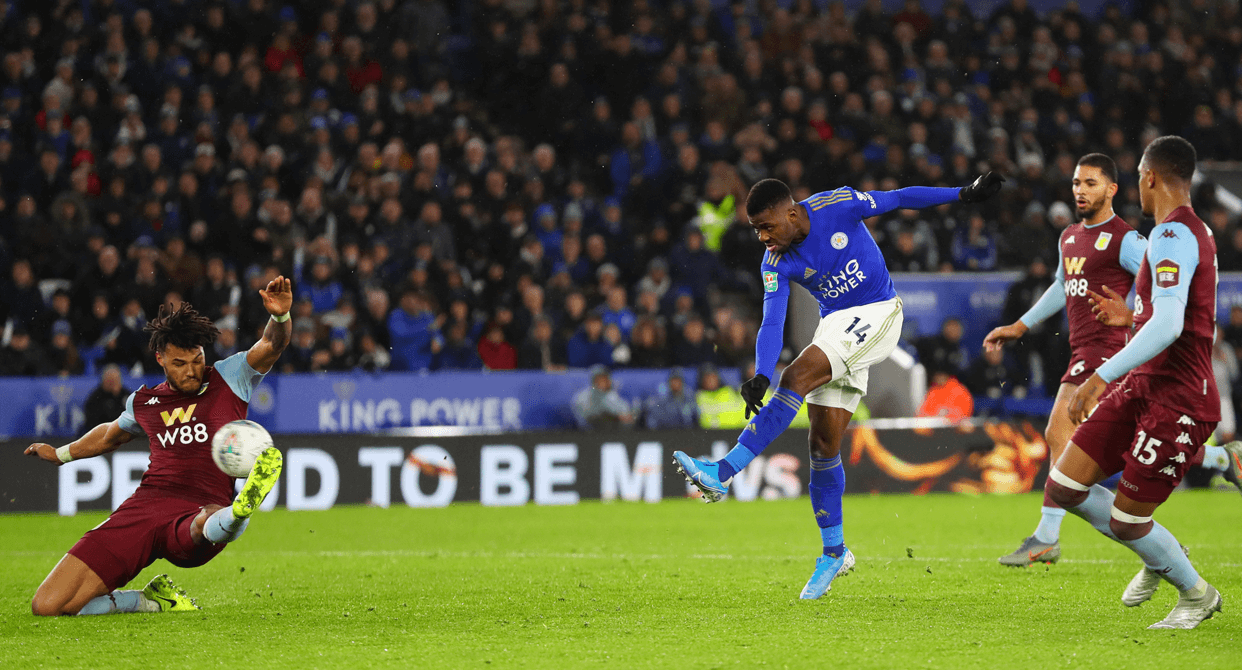 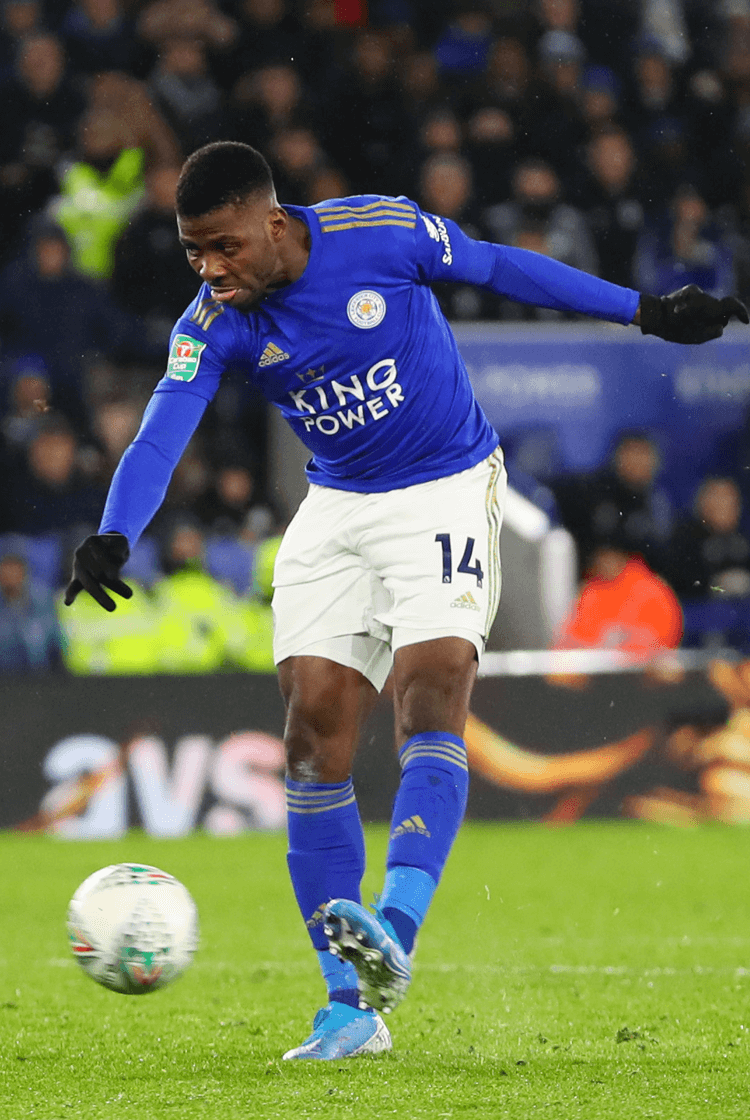 Kelechi Iheanacho's 74th-minute finish ensured that Leicester will avoid entering the second leg of their League Cup semi-final at Aston Villa a goal down. Villa, recently undermined by season-ending injuries suffered by Tom Heaton and Wesley, defended admirably after Frederic Guilbert gave them the lead during the first half, but as Brendan Rodgers pursued an equalising goal, Iheanacho was brought on and eventually provided the reward the pressure they applied during the second half threatened to deliver. "Kelechi is a big talent," Rodgers said. "He didn't play a lot of football at Manchester City and it takes a bit of time to adapt. But since I've come in his confidence has grown and grown and we believe in him and believe in his talent and this season he has really come to the fore." His Villa counterpart Dean Smith said: "It wasn't the performance I wanted, Leicester were the better team but we defended well at times. We have to be honest, they created chances as well. We were loose on the ball; we've got to do better." 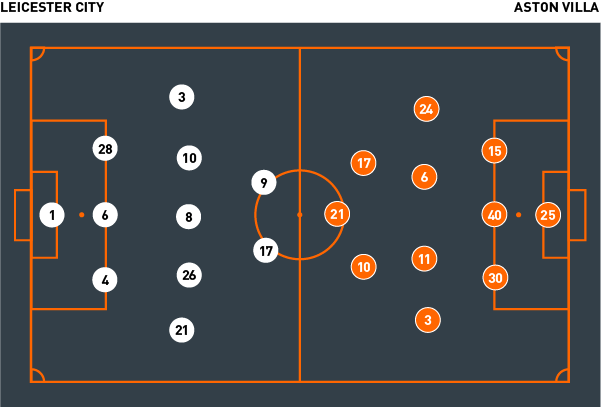 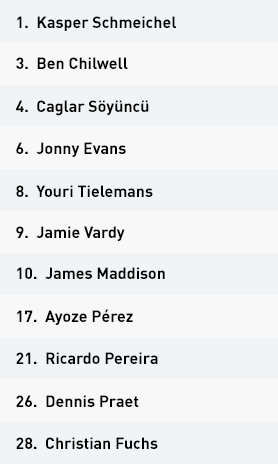 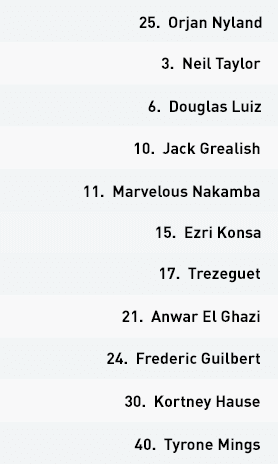 Leicester City were organised by their manager Brendan Rodgers into a 3-5-2 formation. They were confronted with the 5-2-3, and organised and compact defensive mid-block, Aston Villa adopted while they were defending.

The hosts largely dominated possession, and encountered their three central defenders being steadily pressured by Villa's front three and, when the ball travelled to either of the wider of those central defenders, the spare forward withdrawing into midfield to negate potential three-on-twos. The combination of that, and Villa's central defenders following Jamie Vardy and Ayoze Pérez, left Leicester's regularly circulating the ball.

Villa's organisation meant that there were too few occasions during which Leicester were able to receive and turn – they were immediately pressured – and central midfielders Douglas Luiz and Marvelous Nakamba also worked to prevent them from receiving possession in the central midfield areas they most relish. The hosts' central midfielders therefore adopted wider positions; if they were followed, Pérez or Vardy were invited to withdraw to such an extent that they would not be followed; if they weren't, they would receive possession instead.


The little space they were afforded forced Rodgers' team to largely play to feet, and contributed to their attempts to play around them with short, quick passes that required runners moving beyond the receiving player at the point he was receiving so that the subsequent pass could be timed correctly and therefore Villa's press overcome. Their alternative came in a set pass followed by a penetrative one; regardless, those combinations had to be particularly quick amid the intensity with which their visitors pursued possession, but this contributed to a lack of accuracy, and therefore unsuccessful attacks.

Villa, defending their one-goal lead, adopted increasingly deep positions. Their block only left spaces in front of them and outside their midfield; Conor Hourihane also came off of the substitutes' bench to offer a further number within that midfield.

It was Leicester bringing on Hamza Choudhury that invited Caglar Söyüncü and Christian Fuchs to advance further with possession, even if they did so cautiously, but for all of their possession they posed their greatest threat during transitions. Moments of transition led to their finest chances, and eventually their equalising goal.

During the periods they had possession, Dean Smith's Aston Villa adopted a 3-4-3 formation, led by a front three of Trezeguet, Anwar El Ghazi and Jack Grealish. Their hosts, Leicester City, converted from a 3-5-2 to a 5-3-2 when that was the case.

They were actually content to concede possession, and then to prioritise denying Leicester space and capitalising on any potential moments of transition. They had only one shot on target, from Frederic Guilbert, but saw it beat goalkeeper Kasper Schmeichel.

When they attempted to counter Villa did so via their front three and their two wing-backs, challenging Leicester's three central defenders, who were often the only numbers remaining behind the ball during those transitional moments. Brendan Rodgers' team was also quick to apply a counter-press, and to send numerous players into the area around possession in an attempt to apply pressure to it from all direction before either forcing a regain or boxing the ball-carrier in. If the relevant player succeeded in sending the ball towards a different area of the pitch, Leicester were at risk of being severely outnumbered.

During the rare occasions they were in possession for a lengthier period, Grealish withdrew into midfield to provide an extra option for the defenders behind him. If he was found, their most creative player was then in a position to turn and attack, but he required a greater number of opportunities to do so.

It was actually when they had possession, and therefore adopted a more open shape to encourage attacks, that Villa looked most vulnerable. Leicester took advantage of that fact when scoring their equalising goal.