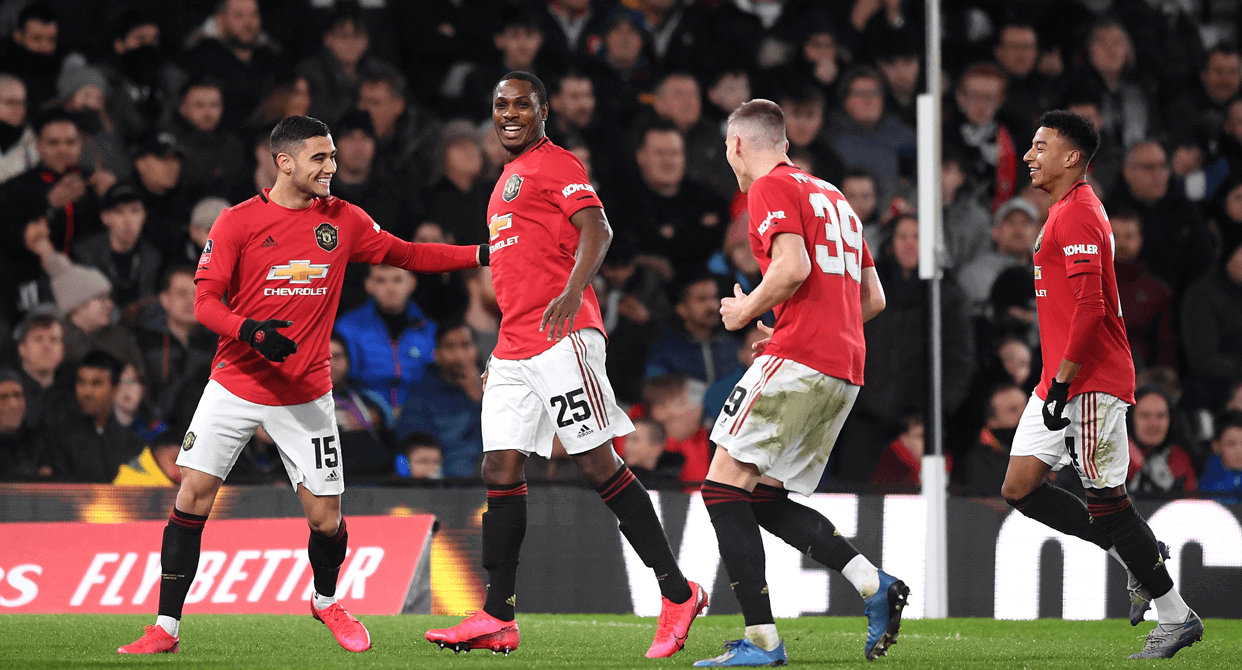 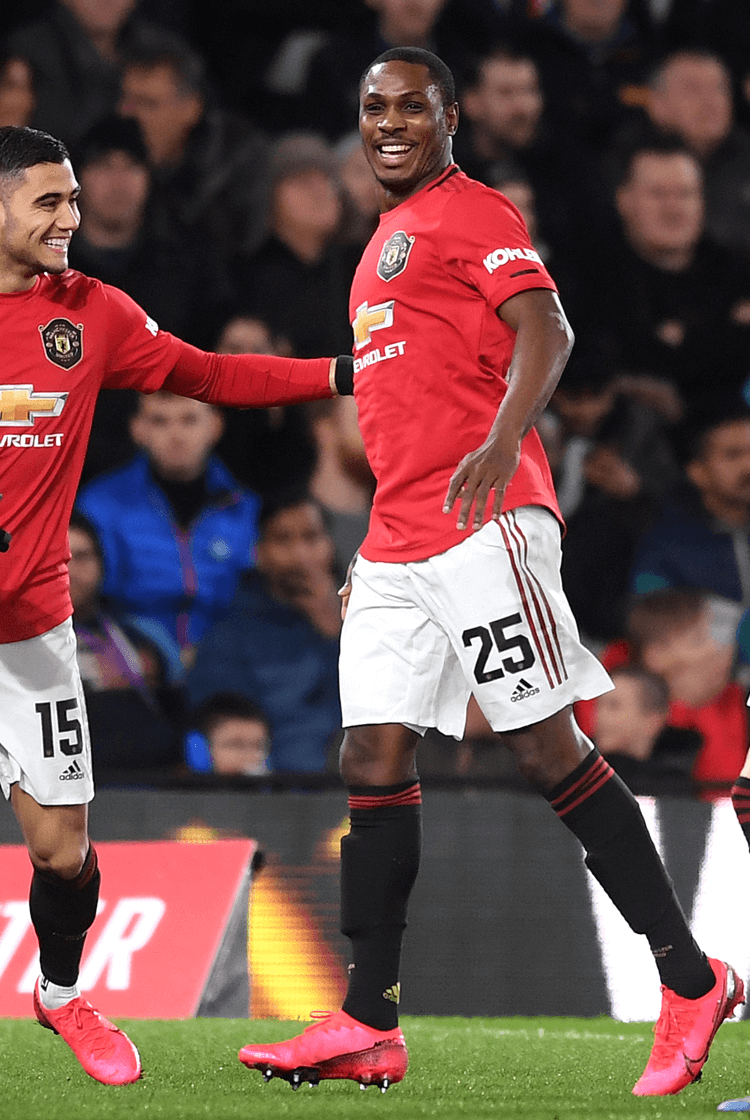 Two goals from shock January signing Odion Ighalo ensured Manchester United progressed to thw quarter finals of the FA Cup at the expense of Championship Derby County, who featured United's record goalscorer Wayne Rooney in midfield. Ighalo's three goals in two starts represent a promising start to his period on loan at Old Trafford; his two finishes followed the in-form Luke Shaw giving United the lead, contributing to the optimism surrounding their prospects that has grown since Bruno Fernandes was recruited from Sporting Lisbon, also in January. "Everyone loves Wayne, all the supporters at Manchester United appreciate what he did," said United's manager Ole Gunnar Solskjaer, who played alongside Rooney in the former England captain's first years at the club. "He played well. He shows class and sometimes he has too much time on the ball for my liking." 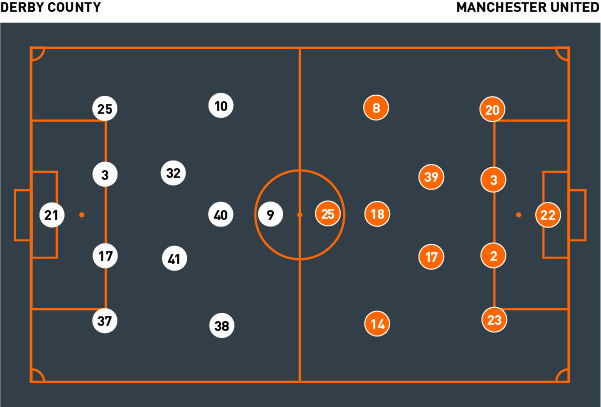 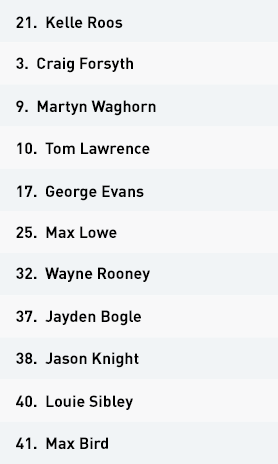 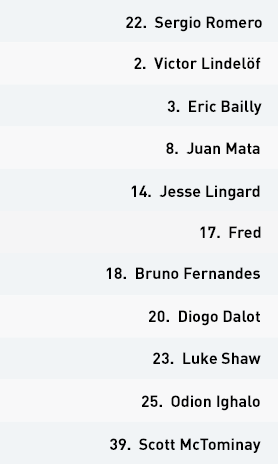 Derby were organised by their manager Philip Cocu into a 4-2-3-1 formation when they had possession; without it, they adopted a 4-4-2 mid-block, in which Louie Sibley advanced to join Martyn Waghorn to form a front two. They encountered opponents who remained in a 4-2-3-1, and whose width posed a constant threat, contributing to them regularly finding their attackers.

When they were with the ball spaces often existed for them to play over the pressure United were attempting to exert, and towards advancing right-back Jayden Bogle, who then sought to build attacks, but they too rarely looked like scoring, largely owing to a lack of creativity in the final third. United’s double pivot of Fred and Scott McTominay also frustrated them, by largely resisting advancing to towards the ball to instead defend the spaces that would have existed between the lines, and therefore to discourage combination play in those areas.

United’s increasing dominance of possession contributed to their attacking midfielders adopting narrower positions, and therefore Derby’s wingers taking more defensive ones, to track United’s advancing full-backs – also contributing to a lack of support when Derby attempted to attack. It was with a fortuitous strike that Luke Shaw gave United the lead, during a period in which they continued to threaten, and found it too easy to attack; Odion Ighalo’s finish owed to the ease with which United advanced into Derby’s penalty area.


United applied less pressure in their attacking half during the second period, contributing to Derby performing with greater promise; their central defenders and central midfielders patiently built around United’s double pivot, and their full-backs advanced to attempt to cross. They also varied their approach, through Bogle offering a wider option.

When they adopted a deeper block and a 4-4-1-1, United remained composed, and switched possession until a suitable space was created for them to advance into. Bruno Fernandes, Jesse Lingard and Shaw were particularly influential, towards the left, and it was their superior quality against a team that played a significant period with six academy graduates that told, particularly when they scored their third.

Manchester United remained in Ole Gunnar Solskjaer’s favoured 4-2-3-1 formation and, as is becoming a more regular feature of their approach, they again often built with a back three via one of their central midfielders withdrawing to the right of their central defenders. When their full-backs advanced, Juan Mata held their width towards the right, but Jesse Lingard moved inside from the left to also feature as a number 10; Luke Shaw therefore consistently overlapped, unlike Diogo Dalot.

They attempted to apply pressure to the hosts’ central defenders; even if that contributed to balls being played over that first line of pressure, their numbers behind the ball meant that they remained well protected in the areas Derby were targeting. Philip Cocu’s team often sought to build play via their right-back Jayden Bogle, but covering pressure from individuals often forced them towards the left, undermining their ability to accurately switch possession, and to find their spare number.

United tweaked their shape so that Mata began to drift inside, where he subtly rotated with Jesse Lingard and Bruno Fernandes and offered regular passing options, and Dalot therefore increasingly advanced further forwards, ensuring that the visitors regularly eased through or around the 4-4-2 Derby were defending with. An attack through a wide position led to United taking the lead, when Shaw volleyed into the ground and in, off of Lingard. Their options through Derby’s block then meant them extending that lead when, with Fernandes towards the left and Lingard central, Odion Ighalo struck following Shaw’s pass and the run from Mata that distracted Derby’s defence.

For the second half Solskjaer’s team adopted a 4-4-2 mid-block, and applied less pressure; their midfield was also advanced beyond, via Derby’s wider, advancing full-backs. Their former captain Wayne Rooney withdrawing into a deep position on the left, and then accurately switching play over United’s structure, contributed to the relative success Derby experienced towards the right.

Wider combinations remained United’s priority. Fernandes – later replaced by Andreas Pereira – and Jesse Lingard rotated and linked with the overlapping Shaw, even if they demonstrated greater patience. When that led Derby into a more withdrawn, deeper block they were rewarded for that patience. Shaw and Dalot continued to advance, often to ahead of Ighalo, who scored their third from Mata’s cutback.